Kroger Is Amassing a Robot Army to Battle Amazon, Walmart

Depending on whom you ask, Kroger is either making a gigantic mistake or solidifying its online future.

At issue is how the largest traditional U.S. supermarket chain is navigating the shift to e-commerce, which became even more pressing during the pandemic as online grocery sales boomed. The retailer was late to embrace the web’s potential. But under pressure from Amazon’s arrival in the category and Walmart’s massive investments, Kroger CEO Rodney McMullen is now overseeing a bold wager on robotics that the company lifer needs to get right.

The key to McMullen’s plan is visible at a 375,000-square-foot facility in Monroe, Ohio, about 30 miles north of Kroger’s Cincinnati headquarters. Three stories above the warehouse floor there, robots the size of dishwashers whirl atop a grid of tracks so large that the lines converge in the distance, like a scene from the sci-fi movie “Tron.” Their mission: retrieve cereal, soda and 28,000 other items from 21 levels of stacked crates and then convey those goods to humans who sort and deliver them to homes.

The fulfillment facility can pick a 50-item order in less than five minutes, much faster than a human worker grabbing goods from a store. Opening this spring, it will serve a region stretching from Louisville, Kentucky, to Indianapolis and Columbus, Ohio, with a mix of same-day and next-day service.

“Society has leapt into a new digital era, and so has Kroger,” McMullen said at an investor event last month, where he pledged to double the company’s $10 billion in digital sales by the end of 2023. “There is still huge opportunity in front of us.”

On Wednesday, McMullen held a call with reporters to discuss the opportunity. But the massive commitment to build these fulfillment centers, or “sheds” — the first few cost more than $50 million each — has its doubters.

The deal with Britain’s Ocado Group Plc, which included Kroger increasing its stake in the U.K. company to more than 6%, came about three years ago. Since then, Americans have shown a preference to pick up online orders outside a store to avoid onerous home-delivery fees. Initially, Kroger’s robots will only be used for delivery. There are also cheaper ways to automate picking groceries, like what Walmart and others are doing with smaller robot-run facilities attached to existing locations.

“This is a pretty big gamble in untested waters,” said Robert Moskow, an analyst at Credit Suisse. “I would have chosen a more flexible, less capital-intensive approach. There’s a lot of unknowns out there.”

McMullen’s bet needs to pay off because the road ahead gets harder. Before the pandemic, Kroger had been losing market share to the likes of Walmart, Amazon, upscale regional chains and no-frills grocer Aldi. Kroger did pick up customers during COVID-19 as Americans cooked more, with sales gaining 8.4% to $132.5 billion last fiscal year — not far off the industry’s pace, and its best growth since buying the Harris Teeter chain in 2014. But consumer spending is expected to shift back to restaurants, and UBS predicts sales in the $1.4 trillion grocery sector will decline in 2021 for the first time in more than 20 years.

This is the challenging environment that accompanies Kroger’s ambitious e-commerce push, which also includes building out a digital marketing business to serve ads from brands like Heinz to all those online shoppers. For years, the company has struggled to find a growth strategy beyond acquisitions, pursuing everything from autonomous vehicles to restaurants, fashion, meal kits and selling groceries inside Walgreens drugstores.

Nailing online grocery could be what shareholders have longed for. But they’re losing patience: Kroger’s shares fell 5.5% during the March 31 investor day as analysts hammered McMullen with questions about how quickly the Ocado sheds can ramp up and deliver real profits. (The company’s stock has since recovered most of that decline.)

Many unknowns remain: Kroger has to pay for baggers and drivers for its fleet of delivery trucks (400 for the Monroe shed alone), as well as cough up fees to Ocado that Credit Suisse estimates may run as high as 5% of sales for the bots and software that underpin the whole operation. Orders fulfilled by Ocado will also cannibalize in-store purchases, which are currently more profitable. That margin disparity between the sheds and the stores won’t even out until four years from now, Kroger has said. Construction delays have also hampered progress, and Kroger’s original commitment to have 20 sheds under construction by now has been whittled down to 11.

“It’s unclear to us whether the Ocado model can operate profitably in U.S. markets,” said Moskow, who estimates it will take Kroger as long as eight years to recoup its investment and — like most analysts — has a hold rating on its shares.

Competitors including Walmart, Albertsons and Ahold Delhaize are taking a simpler approach, testing so-called “micro-fulfillment” centers that can fit snugly in the back of a store or nearby. They’re cheaper and faster to build, are located closer to customers’ homes and could eventually replace many of the human order pickers that now clog the aisles at supermarkets across the nation. Walmart, which currently employs 170,000 people just to pick and pack online orders, now plans to build 100 micro-fulfillment centers, with more likely to come. Even smaller chains, like Asian-food retailer H Mart, are now installing them.

Analysts have said micro-fulfillment is likely the most profitable way to handle online orders, while Morgan Stanley’s Simeon Gutman calls it “the future of grocery.” McMullen, naturally, disagrees, and during an April 6 interview declined to even utter the competing technology out loud.

“I don’t use the term,” he says, when asked about micro-fulfillment. “That’s just me.”

McMullen, who began his Kroger career in 1978 as a part-time store clerk and became CEO in 2014, is more than happy to discuss the first Kroger shed in Monroe. At first glance, the stacks of constantly shuffling crates call to mind the game Tetris. When the facility is fully operational, as many as 1,000 robots will deliver items to workers at picking stations, who can bag them for multiple customers at a time. The Monroe shed will equal the sales of about 20 brick-and-mortar stores. 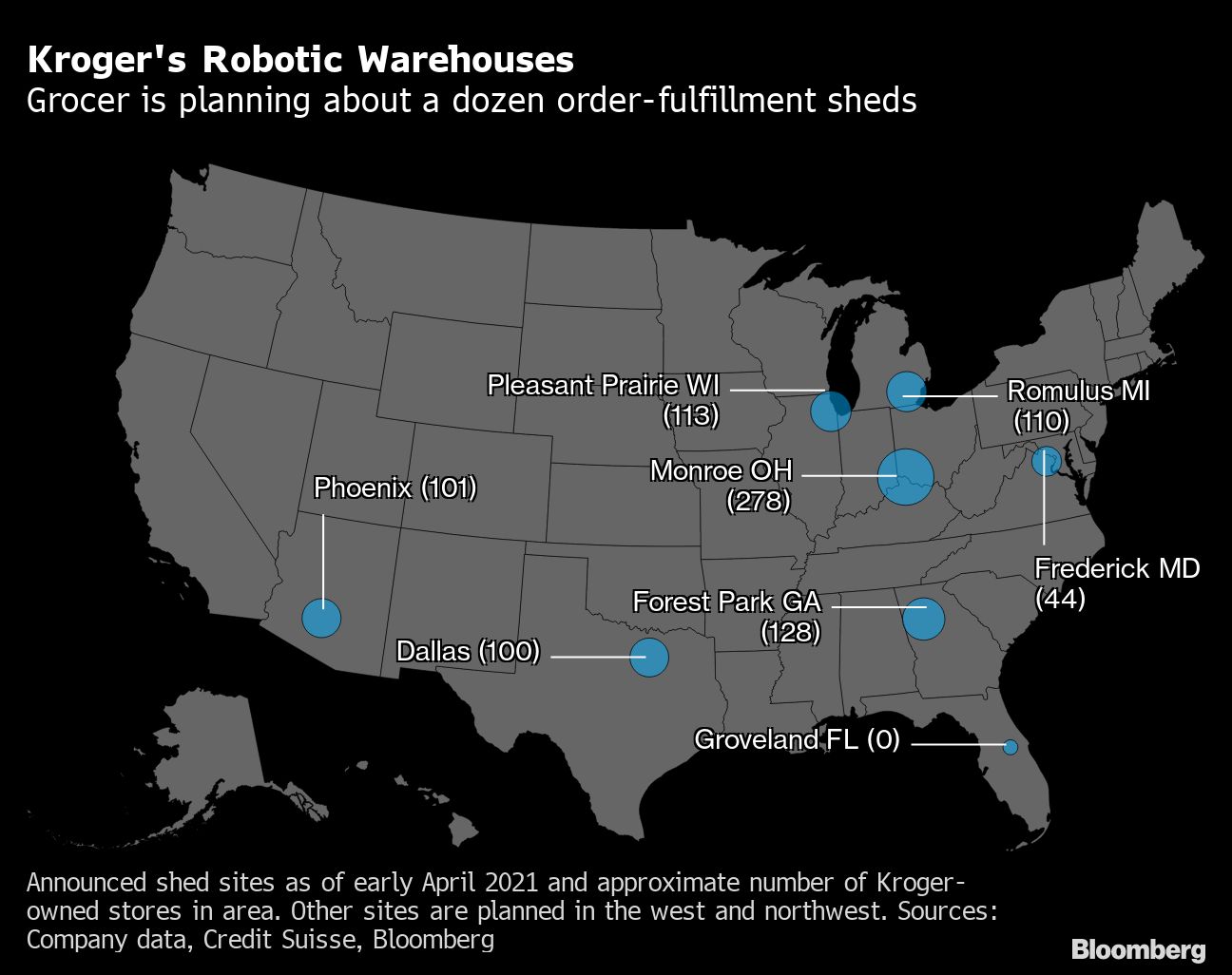 Right now, it’s unclear whether the sheds will also shuttle orders to stores for free curbside pickup, or just deliver to homes, but McMullen said the shed-to-store model will be tested. Delivery fees will start at $9.95 but eventually will vary based on the demand for deliveries at that time, how far in advance the order is placed and even a customer’s loyalty to Kroger.

Kroger’s CEO likes to linger at a high vantage point in the facility, watching the robots mine goods from the deep columns of crates below, because it’s where he sees Kroger’s digital vision mesh with its real-world supply chain. “I have the advantage that people won’t tell me to move along,” McMullen said.

Construction is under way on nearly a dozen more warehouses across the country, some of which will be smaller than the Monroe shed. The second location in Central Florida, where the grocer has exactly zero stores and entrenched competitors including Publix and Walmart, suggests McMullen is doubling down on his bet. Again, there's skepticism: “It will be nearly impossible for Kroger and Ocado to make a dent in new markets,” Moskow, of Credit Suisse, said.

Still, it could work. Ocado’s robots, once they ramp up, can triple the order-picking productivity of a typical micro-fulfillment center, according to e-retail consultant Brick Meets Click, and operate with 99% accuracy. And if, as expected, online orders continue to grab more and more share of grocery sales, those higher-than-expected volumes, combined with cost reductions, will allow Kroger to get a quicker return on its investment.

That’s what McMullen is counting on. But even he seems to be hedging a bit, saying in the interview that Ocado is merely “one piece of the total puzzle” in digital, and that the sheds will be supplemented by an aggressive expansion of curbside pickup, which car-crazed Americans prefer. Ocado will also provide software to Kroger stores to help process those curbside orders. McMullen won’t say when the fancy Ocado sheds might actually be more profitable than the old-fashioned method of customers with shopping carts walking aisles. The process, he says, will be “a journey.”