Niels-Arne Baden has a problem: the factory he’s building for Green Hydrogen Systems is too small.

Plans for the Denmark site to be one of the largest for assembling the machines that make hydrogen from electricity were finalized about a year ago. But demand for those electrolyzers is growing so fast that Baden’s now planning to double its size.

“When I joined this company in 2014, there was no market,” Baden said. “Then last year, it was ‘Kaboom!’, and we were up to our ears in opportunities.”

The Danish company isn’t alone. Governments, energy giants, automobile companies and lobbying groups say hydrogen use is pivotal for cutting greenhouse gas emissions quickly enough to prevent the worst effects of climate change. That’s triggered a global race to stake claims in what could be a $700 billion business by 2050, according to BloombergNEF.

The European Union aims to push as much as 470 billion euros ($550 billion) toward hydrogen infrastructure; China, Japan and South Korea will all likely use hydrogen to achieve recent pledges to slash emissions; and Saudi Arabia plans a $5 billion hydrogen-based ammonia plant powered by renewable energy.

“It’s countries going against countries to lock in market share,” said Gero Farruggio, head of renewables at research firm Rystad Energy. “We call it ‘the hydrogen wars’ because of the way governments are racing to subsidize these projects to be a leader.”

Farruggio and his colleagues tallied up over 60 gigawatts of hydrogen projects globally that would be powered by renewable energy, with the majority of them announced this year. The major players don’t include the U.S., where President Donald Trump has championed fossil fuels and moved to withdraw the country from the Paris climate accord. The outcome of Tuesday’s presidential election could determine whether the U.S. stays on the sidelines.

Using hydrogen as an energy source is a century-old idea. An electric machine to produce the gas was installed in 1927 in Norway to help fertilizer production. Since then, it’s been used in zeppelins, rocket engines and nuclear weapons.

Yet it does have drawbacks. Hydrogen is expensive to make without expelling greenhouse gases, difficult to store and, not least, highly combustible.

Despite the inconsistent interest over the years, this era seems different, said David Hart, director at the consultancy E4tech in Switzerland. He started studying hydrogen as a graduate student at Imperial College London in the mid-1990s after seeing fuel cells on display at an environmental-technology exhibition in Yokohama, Japan.

During the ensuing decades, he watched public interest in hydrogen rise to match his own, only to fall back again into obscurity. The U.S. once touted hydrogen as a “freedom fuel” to break its dependence on imported oil, but that strategy stalled. Hart considers hydrogen the “elegant ultimate solution” — one fuel source with myriad applications.

“There were periods when nobody cared about climate change, so there weren’t the right drivers for CO2 and fossil fuel to be pushed out,” Hart said. “But I had a stubborn belief that at some point the conditions would be right. I had no idea if it would be five years or 50 years, but there was a feeling.”

“A lot of the important steps and important positioning will happen before the end of the decade,” Hart said. “It puts you in a much more difficult position and a more expensive position if you’re not moving now.”

So far, Europe is moving aggressively. European Commission President Ursula von der Leyen put the bloc’s Green Deal at the center of a 750 billion-euro spending plan to help the economy recover from the pandemic.

At its heart is a goal to build 40 gigawatts of capacity to produce hydrogen from renewable sources this decade. Member states are also writing their own blueprints, and the U.K. plans to release a hydrogen strategy in coming months.

When Baden, the Danish executive, joined Green Hydrogen Systems in 2014 as chief executive officer, the company was still testing its machines. For years, its only orders were for small demonstration projects, mostly in Denmark. The company would deliver the electrolyzers, do trial runs and then disassemble them.

“There was no market,” Baden said. “There were just plans and a lot of ideas.”

That changed last year. At an industry fair in Hanover, Germany, executives from automotive companies and wind turbine manufacturers wanted to learn how electrolyzers could help them store some of their cheap, renewable electricity. Suddenly, orders were flooding in.

“There was no chance we could deliver the volumes we were seeing coming,” Baden said.

“I’ve wondered if all these big projects are for real,” Baden said about his order sheet. “And if we didn’t know who was asking, we wouldn’t believe they would pull through.”

There are industries, mainly oil refining and chemicals production, that rely on hydrogen already. But they typically use fossil fuels to make it, producing as much CO2 every year as the economies of the U.K. and Indonesia combined, according to the International Energy Agency.

Hydrogen can be made without producing carbon emissions, either by using machines powered by renewable energy or by capturing the pollution. Those methods minimize the carbon footprint because hydrogen mainly produces water vapor when burned.

That’s getting attention in boardrooms as shareholders apply pressure on companies to clean up their businesses.

Shell plans to produce hydrogen in the Netherlands for its refineries. Airbus SE wants to propel planes with the gas. Steelmaker giant, ArcelorMittal SA, is working on a pilot project to replace fossil fuels in Hamburg.

Climate-friendly production methods are costly, however, so their viability likely depends on government policies penalizing emissions. 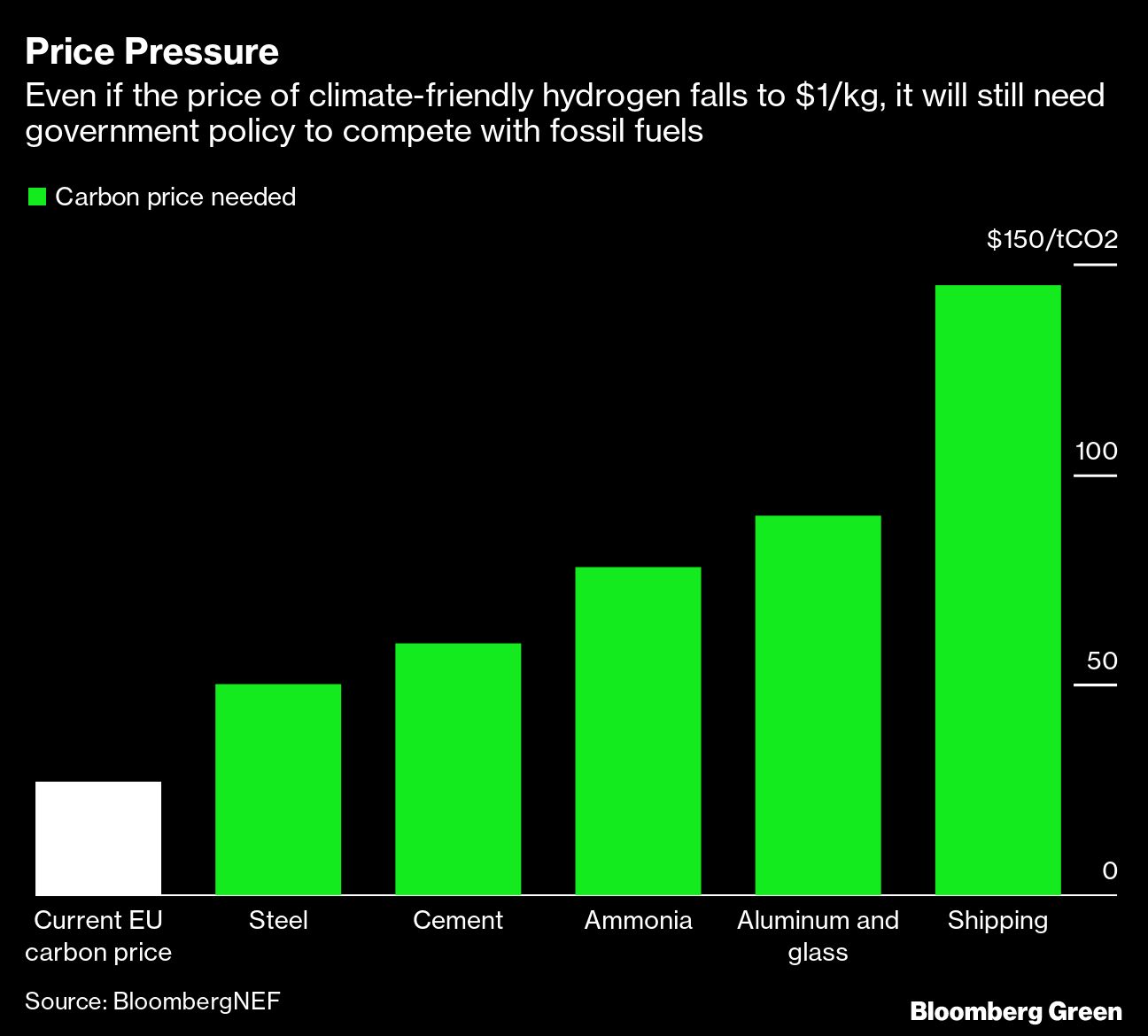 While Europe has the most expansive carbon trading system and leading plans to cut emissions, China is coming fast. President Xi Jinping surprised the world by announcing that the country would become carbon neutral by 2060.

China is also the biggest and cheapest manufacturer of electrolyzers, taking advantage of lower costs for labor and raw materials.

Cockerill Jingli Hydrogen, a partnership between Suzhou Jingli Hydrogen Manufacturing Equipment Co. and the closely held John Cockerill Group of Belgium, opened an 18,000-square meter factory last year in China with the capacity to produce 350 megawatts of electrolyzers annually. That will expand to 500 megawatts.

“The Chinese always have an advantage in that they go fast,” said Edgare Kerkwijk, managing director in Singapore of Asia Green Capital Partners, a consultancy and investment firm. “And as soon as they get a critical mass, they are able to export.”

European manufacturers are trying to keep up. Green Hydrogen Systems, the U.K.’s ITM Power Plc and Norway’s Nel ASA plan to open factories within a year having a combined annual output of about 830 megawatts, more than six times the amount of machines shipped globally in 2018.

Thyssenkrupp AG said it already has 1,000 megawatts of electrolyzer production capacity. At Siemens Energy AG, the output of its electrolyzers has been growing about 10 times every few years, said Armin Schnettler, executive vice president for new energy business at Siemens.

China hasn’t cracked the European market yet, but Nel CEO Jon Andre Lokke said that’s only a matter of time.

“We are so far ahead of the game,” Lokke said. “But we have to run very, very fast.”

Japan and South Korea are focusing on putting hydrogen in motion. While fuel-cell technology has been overshadowed by electric passenger cars, hydrogen could be key to powering trucks, trains and airplanes. Hyundai will export 64,000 hydrogen-powered trucks by 2030.

As for the U.S., it’s being lapped by most other entrants. The federal government hasn’t released a road map for building a hydrogen economy, and it has diluted emissions standards for autos, power plants and the fossil-fuel industry.

“There’s so much momentum from so many different places and applications,” Hart said. “This is no longer about ‘What is a fuel cell?’ and ‘Is hydrogen safe?’ Now, it’s about ‘Where should we spend our first hundreds of millions?’”