Nearly one in four beds lies empty at TaraVista Behavioral Health Center in central Massachusetts — not for lack of patients, but for lack of staff.

Even before the pandemic, nurses and lower-paid aides were in perennially short supply, but the 116-bed facility could still run full, said Chief Executive Officer Michael Krupa. At similar hospitals around Massachusetts, hundreds of beds can’t be filled, and “the reason is exclusively staff,” he said.

What some are calling the worst U.S. health-care labor crisis in memory is sharpening concerns about attrition from resistance to vaccine mandates — even in the medical mecca of Massachusetts, where Covid cases remain well within hospital capacity. About 16% of American hospitals had critical staffing shortages as of Oct. 1, according to the U.S. Department of Health and Human Services.

The uptick initially coincided with a surge in COVID-19 hospitalizations, but shortages have persisted even as the virus ebbs, suggesting other factors.

“We don’t have a single position we can afford to lose right now,” Eric Dickson, president of UMass Memorial Health, told Bloomberg Radio last month. “I have areas that have a 50% vacancy rate. And God forbid we lose any more.” 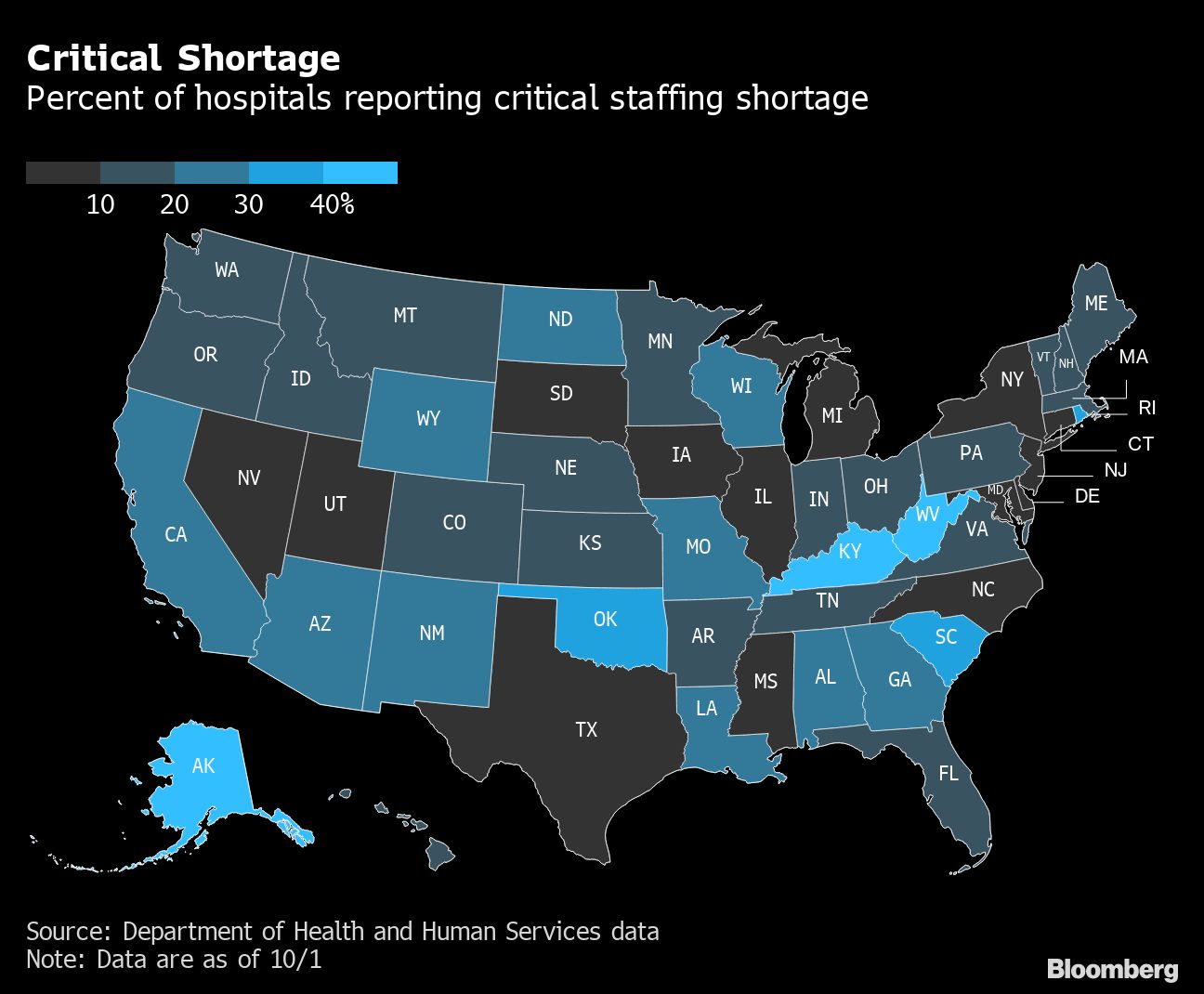 In recent weeks, worker shortages have prompted extreme measures, even in regions that aren’t Covid hot spots. In Virginia, five state psychiatric hospitals had to stop accepting patients. A lack of nurses forced Rhode Island Hospital to close part of its emergency department. And a major Michigan hospital chain says 5% of its beds can’t be filled for lack of staff.

At TaraVista, a modern building of airy corridors and big windows, demand for psychiatric and detox beds is soaring amid the heightened emotional stress and substance use of the pandemic. “Parents call me crying: ‘Please take my child,’” said admissions director Sheila Crowley. It hurts to turn them down, she said.

Historically, severe health-care labor shortages have cropped up in scattered areas and hard-to-hire sectors like nursing homes, said Karen Donelan, a professor of health policy at Brandeis University. But “at this point, we’re hearing about them in most states,” she said, and even in large, wealthy institutions that haven’t traditionally struggled.

Factors include exhaustion-fueled retirements and resignations; absences due to illness and quarantine; immigration limits in recent years; and the lure of lucrative “travel” contracts from competing employers around the country. Now, add vaccine resistance to the mix.

“All of those challenges at the same time,” Donelan said.

Nurses’ wages have remained relatively flat for many years when adjusted for inflation, she said, and pay for less-skilled jobs has also stagnated. The country has nearly 4 million nurses and the supply has been growing steadily in the last decade, she said. Demand, spurred by an aging population, has also been rising and is expected to accelerate in the coming decade.

In some markets, raises and bonuses in response to the pandemic may represent a long-term correction, Donelan said, though that isn’t clear yet.

Overall, employment in the health-care sector remains below prepandemic levels. The gaps are biggest in nursing homes and residential care settings: Nursing facilities employed about 14% fewer people in August than in January 2020, according to Bureau of Labor Statistics data. In residential mental-health facilities, the drop is 8%.

Physician offices employ about the same number of workers they did before the pandemic, while employment in labs and dental offices has increased.

In the hardest-hit settings, leaders of hospitals and health agencies are seeing the worst staffing crunch in as long as four decades. At a Massachusetts legislative hearing last month, officials testified that at least one in five jobs caring for people with disabilities and in nursing homes goes unfilled.

Other labor sectors, such as tourism and food service, are seeing labor shortages as well, but “the consequences are different,” said Michael Weekes, president of an association of human-services providers.

“While it may be disappointing for someone to wait for a lobster roll or an ice cream cone, or have a longer wait for their hotel room, when essential staff are missing from human services, clients’ and residents’ safety and health are immediately at risk,” he said.

In behavioral health — which includes psychiatric and addiction care — at least 400 beds statewide remain empty, while several hundred patients are forced to “board” inappropriately for days in emergency rooms or medical wards.

An additional 300 psychiatric beds are expected to come online this year, but “the big question is, where will the staff come from?” said David Matteodo from the Massachusetts Association of Behavioral Health Systems.

More than half the state’s nursing facilities have had to stop accepting new residents intermittently, according to Massachusetts Senior Care Association president Tara Gregorio. She called for foreign workers to fill the gap.

State officials are allocating $31 million to shore up the behavioral health workforce, along with tens of millions more to address the broader crisis.

For now, aside from government financial aid, employers have been left largely to their own desperate devices to keep and hire staff.

At TaraVista in central Massachusetts, CEO Krupa estimates the hospital is investing an extra $1 million a year in pay, improved benefits, bonuses and other sweeteners for 310 staffers there and at a sister hospital. Overtime has doubled from about 3% of pay to 6%.

Asked if he had ever seen retention bonuses and such robust raises, he replied, “dramatically, emphatically no, no, no.”

Krupa is determined to have enough staff to fill all beds by year-end, he said — even if that means recruiting and housing workers from out of state or even other countries. He sees the longer-term solution in higher payments by insurers, and great potential in student-loan forgiveness.

The hospital’s vaccine mandate kicks in Nov. 1, he said, and “I am hopeful we will not lose many staff. But I know we will lose some.”

Merck in Deal With Sinopharm to Bring Covid Pill to China