Wedged up against the southern edge of the Rio Grande, the sprawling desert city of Juarez has seen its share of economic booms over the years.

But perhaps none quite like the one that’s taken hold today.

There are excavators and bulldozers seemingly everywhere, pushing dirt into tall piles and leaving everything — and everyone — covered in a coat of wind-blown dust. The space they are carving out of the desert floor will house a long list of new factories that were ordered up by anxious CEOs across the world when the pandemic roiled their global supply routes.

Ambu A/S, a Danish medical device maker, is erecting a facility on the outskirts of the city. Several miles away, Keeson Technology Corp., a Chinese furniture maker, is building a second plant here just months after opening its first. Boyd Corp., a California-based conglomerate, recently inaugurated one factory and plans to build three more. And MGA Entertainment, a California-based toymaker, began cranking out Little Tikes Cozy Coupes from its plant last month even before construction crews had cleared out debris piles or paved the parking lot.

What’s the rush at MGA?

The company has 750 containers of toys stuck in supply chain hell at ports around Los Angeles. Produced in China, those items were supposed to be on U.S. store shelves this holiday season. That won’t happen, says Isaac Larian, MGA’s chief executive officer. But the Juarez plant is now shipping two truckloads of toys into the U.S. each day and that number will soon grow to 10. What’s more, Larian plans to break ground on a second factory in Mexico next year and will begin shifting some of MGA’s Chinese production to these plants.

“We have big ambitions and big plans for Mexico,” he says.

This, in the lingo of corporate executives, is near-shoring, one of the biggest economic transformations sparked by the pandemic: Shrink the length of the supply chain to keep production closer to its final destination and reduce the risk of some snag messing things up along the way. A shorter chain is a stronger chain, the thinking now goes, and there’s a growing sense that this new approach will remain in vogue in C-suites long after Covid fades.

For the multinationals that do business in the red-hot U.S. economy, near-shoring often means northern Mexico, where labor costs are cheap, land is plentiful and the border is just a short ride away. El Paso, Texas, is less than 10 miles to the north of most of the new plants in Juarez.

Other border cities — Tijuana, along the west coast, and Reynosa, Matamoros and Piedras Negras, far to the east — are undergoing similar industrial booms, providing a much-needed lift to a Mexican economy that has been slow to recover from last year’s collapse. 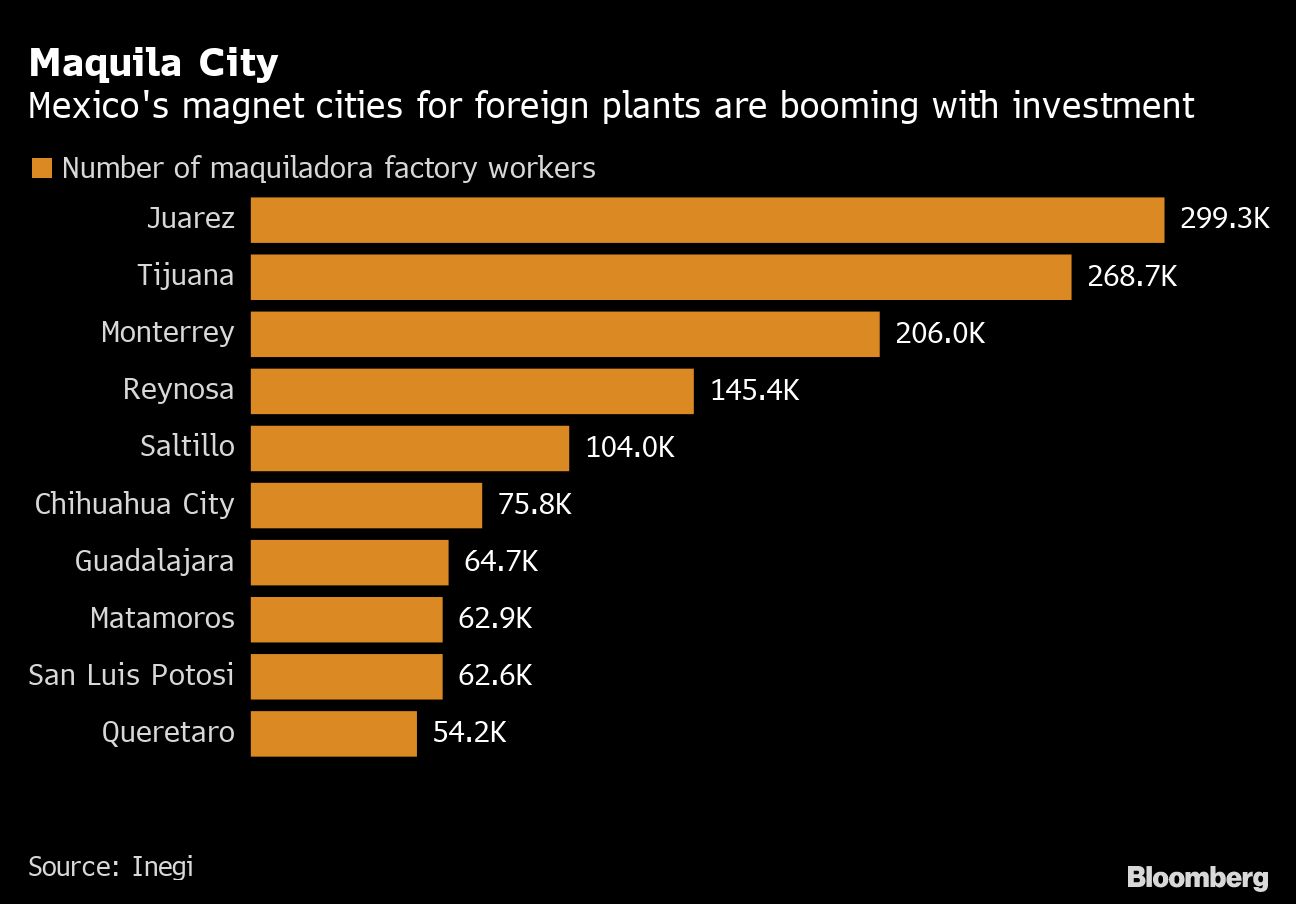 For more than half a century now, the factories in these cities have been a key cog in the U.S. supply chain. Known in the industry as maquiladoras, they take imported parts, assemble them into consumer and industrial products and then ship them north.

When Nafta, the free trade deal between the U.S., Mexico and Canada, took effect in 1994, multinationals set up maquiladoras at a frenetic pace. Juarez alone is home to plants owned by General Electric, Honeywell International, Bosch, Foxconn Technology, Siemens and Electrolux, among others.

Years later, the region began to stagnate when China entered the World Trade Organization. Many companies pulled out of Mexico and set up shop in China, where labor costs were even lower. Flareups of gruesome narco violence along the border only added to the exodus.

China kept stealing U.S. market share from Mexico right up until Donald Trump took office in Washington. When he started slapping tariffs on Chinese-made products, Mexico suddenly looked pretty attractive again to executives. Then the pandemic came along and turbocharged the shift. Keeson, the furniture maker, is Exhibit A for this: It first made plans to open a factory in Juarez shortly after Trump launched his trade war against Beijing, and it sped up those plans by a full year when Covid hit.

“Manufacturing is coming back for sure,” says Jason Tolliver, a managing director who helps oversee logistics and industrial services in the Americas for real-estate firm Cushman & Wakefield PLC. The conversations he’s having with corporate leaders, he says, indicate this wave of investment along the border is just beginning. “It is structural and it’s long term.”

Intermex is rushing to cash in. It’s leasing out 5 million square feet more of factory space in the city today than it did a year ago, and it’s building four additional factory sites. They will be tightly clustered in what is now just a barren field of dirt on the city’s southwestern edge.

As excited as Melendez is about the boom, he’s already mentally preparing for the bust that often follows. “In my career, I’ve typically seen the valleys and peaks seven to 10 years apart,” he says. He figures the slowdown will begin by 2024.

As Melendez drove through the city on a recent weekday afternoon, that seemed like a distant thought. “Hiring” signs kept popping up all around him — on the facades of factories, on buses, in shop windows.

This is what lured Efrain Gonzalez back to Juarez from his native Veracruz in the south.

People associate Mexican migrants with the U.S. labor market, but the truth is many of them, like Gonzalez, end their journeys just miles south of the border, especially when the maquiladoras are humming like they are now.

The factory jobs offer pay that, while a fraction of typical U.S. wages, is markedly higher than what the migrants can earn back home in the impoverished south of Mexico. And they don’t have to worry about getting deported.

Gonzalez, 49, earns a little over $80 a week, plus benefits like free lunch, at the Keeson plant, which produces the company’s Ergomotion adjustable beds. He said he knew he’d find work as soon as he set foot back in Juarez a few months ago. The sight of all the new factories going up made that clear. “There’s a lot of work here.”