Russia’s invasion of Ukraine has disrupted the supply of almost half of the world’s sunflower oil exports, forcing companies to turn to less desirable alternatives such as palm oil in products ranging from potato chips to cookies.

Thousands of items, also including ready meals and even wrapping paper, use sunflower oil. Prices are surging and the ingredient will only become more scarce from the summer as Ukrainian farmers may struggle to grow and export the crop.

“Sunflower oil prices have gone up 1,000%, but it is less about the price as the oils are often only a small constituent part of the products,” said Richard Walker, the managing director of grocery chain Iceland Foods. “The real challenge is getting your hands on it.”

Just as the food industry was getting a handle on dealing with Covid-related shortages, Russia’s invasion of Ukraine has exacerbated the situation with the war driving up prices of basic ingredients such as wheat. U.S. President Joe Biden has warned that the world will experience food shortages and countries should prepare for alternative sources. 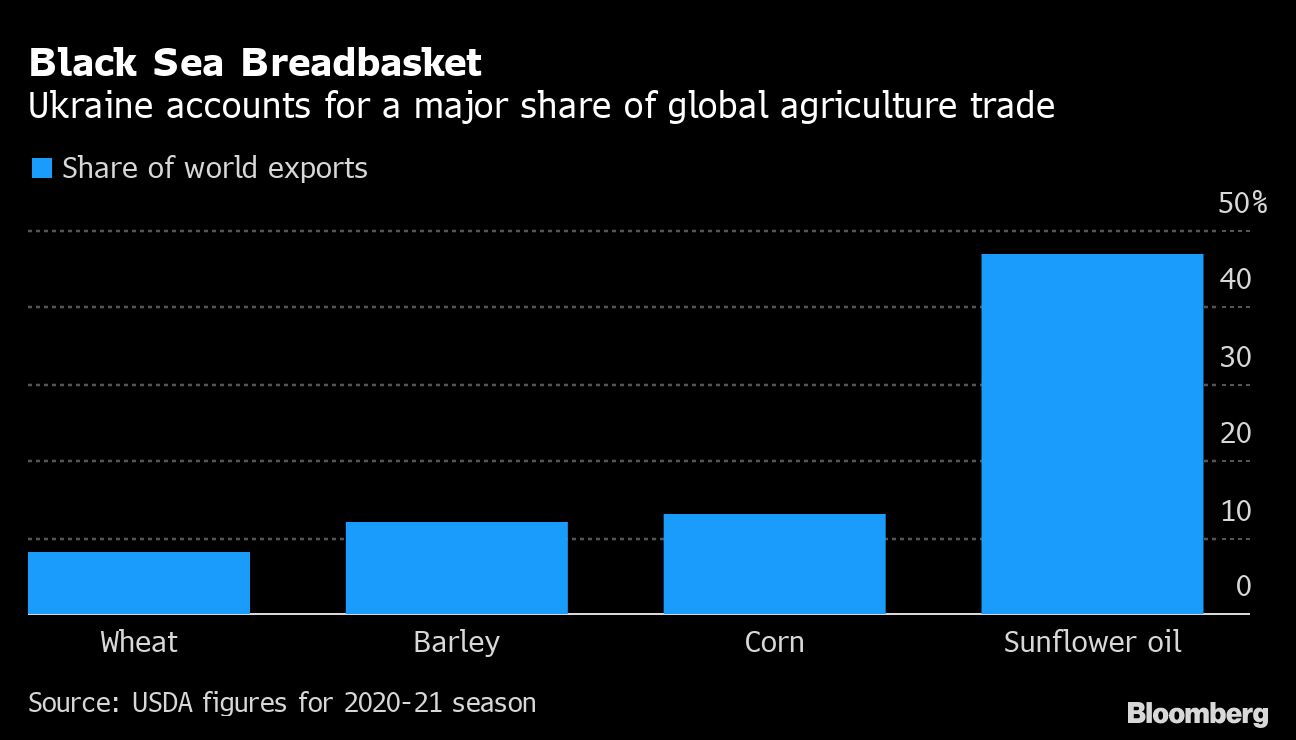 Walker said 450 products Iceland Foods sell are affected and while many can use alternatives, such as rapeseed oil, the grocer will have no choice but to “regrettably” use palm oil in about 30 to 40 products. This is a reversal of a high-profile pledge the grocer made in 2018 to remove all palm oil from its own-brand lines over concerns about its links to forest destruction.

“I just don’t know how long this will go on for,” Iceland’s Walker said, adding that it would only use sustainably grown palm oil. “The only alternative to using palm oil under the current circumstances would simply be to clear out our freezers and shelves of a wide range of staples.”

Wm Morrison Supermarkets said it too will have to use sustainable palm oil in some products when they are unable to switch to alternatives such as rapeseed oil.

Russia’s invasion has caused a humanitarian disaster in Ukraine and disrupted trade in foods across the world, sending wheat and corn prices to the highest in a decade. Ukraine is a key supplier of grains to countries in the Middle East. Meat prices are also under pressure as the cost of the feed used for cattle and pigs rises.

Ukrainian farmers are pressing ahead with spring planting, but will face challenges as they grapple with shortages of workers, fuel and fertilizers. Russia has blocked Ukraine’s ports, cutting off the traditional export route. Ukrainian President Volodymyr Zelenskiy said Thursday that Russian troops are targeting agriculture, placing land mines in farms and destroying machinery.

“Where sunflower oil exists as an ingredient in products, retailers will be substituting it with other safe oils, such as rapeseed oil,” said Andrea Martinez-Inchausti, Deputy Director of Food at the British Retail Consortium. For food like potato chips which use sunflower oil as a key ingredient, retailers will add information on substitute oil onto existing labels, she said.

For pre-packaged sandwiches, sellers are having to put up signs explaining some ingredients may have changed because the packages were printed in advance, according to the British Sandwich & Food to Go Association. Philippines-based Monde Nissin said it’s substituting U.K.-sourced rapeseed oil for sunflower oil in its meat alternatives.

Companies using sunflower oil for frying have been replacing it with palm oil, soybean oil and rapeseed oil, industry group Fediol said. Andrew Crook, president of the U.K.’s National Federation of Fish Friers, said his own shop in Euxton in northwest England has seen prices for 20-liter sunflower oil drums rise to 40 pounds ($52) from 30 pounds in the past two weeks. They typically go through eight or nine a week and might have to switch to palm oil at some point, though he values sunflower for its “nice, clean taste.”

That raises concerns that higher food prices and the need to search for supplies further afield will water down Europe’s food standards and push companies to opt for ingredients that may be more harmful to the environment. Palm oil and soy have come under increasing scrutiny in recent years over their role in deforestation, prompting plans for EU import curbs.

Rapeseed oil is seeing the highest increase in demand, according to Hemeline Macret, head of oilseed market analysis at Strategie Grains. “It’s used for food already and palm oil is not very popular because of its bad image.” Soybean oil isn’t used in many food recipes because it’s often made from genetically modified soy, she said.

The war is exacerbating an already strained supply chain, with transportation snarls and harvest setbacks pushing food prices to record highs. Soaring costs for basic foods in import-dependent Middle Eastern and North African countries are putting people’s resilience at a “breaking point,” according to the United Nations’ World Food Programme.

“If this war doesn’t stop soon, supply disruptions could last from now to 2023,” Hemeline Macret said.