Biden Needs More Than $52 Billion to Counter China in Chips

President Joe Biden’s blueprint for the U.S. semiconductor industry marks an ambitious effort to set industrial policy for a critical sector of the economy, but the strategy will need more money and global support to take back chip supremacy and preempt a rival effort from China.

The White House on Tuesday outlined a sweeping plan to secure the conduits for critical products from medicines to chips, responding in part to the growing economic and political sway of its Asian rival. Semiconductors — the basic yet incredibly sophisticated components in most every modern device — took centerstage in a 250-page White House report, which highlighted Beijing’s “ultimate goal of cyber sovereignty and establishing first-mover advantage.”

The U.S. Senate expressed bipartisan support by passing a bill offering $52 billion to bolster domestic chip manufacturing the same day. That’s aimed at reassuring industry leaders like Intel Corp., Samsung Electronics Co. and Taiwan Semiconductor Manufacturing Co. as they consider expanding investments in production capacity in the country. It’s a hefty pledge, but the money will go fast in an era where a single advanced wafer fab runs more than $10 billion.

China has made technology advances a major plank of its 14th five-year plan, with President Xi Jinping pledging $1.4 trillion over six years to secure a lead in sectors like chips, artificial intelligence and autonomous driving. South Korean companies like Samsung and SK Hynix Inc. are committing $450 billion over a decade on chip research and expansion, while TSMC alone has earmarked $100 billion over the next three years.

“$50 billion is a great start but this is an expensive industry with heavy levels of subsidies being proposed across multiple geographies,” said Anne Hoecker, a partner at Bain & Co. The investment “provides more assurance for semi manufacturers to make large, multi-year investments.”

Biden is demonstrating a willingness to break with the laissez-faire traditions of the U.S., calculating the semiconductor industry merits a different approach given the deep government involvement in other countries. He has powerful allies in his corner, in nations that command leads in different sectors of the giant global chipmaking apparatus. 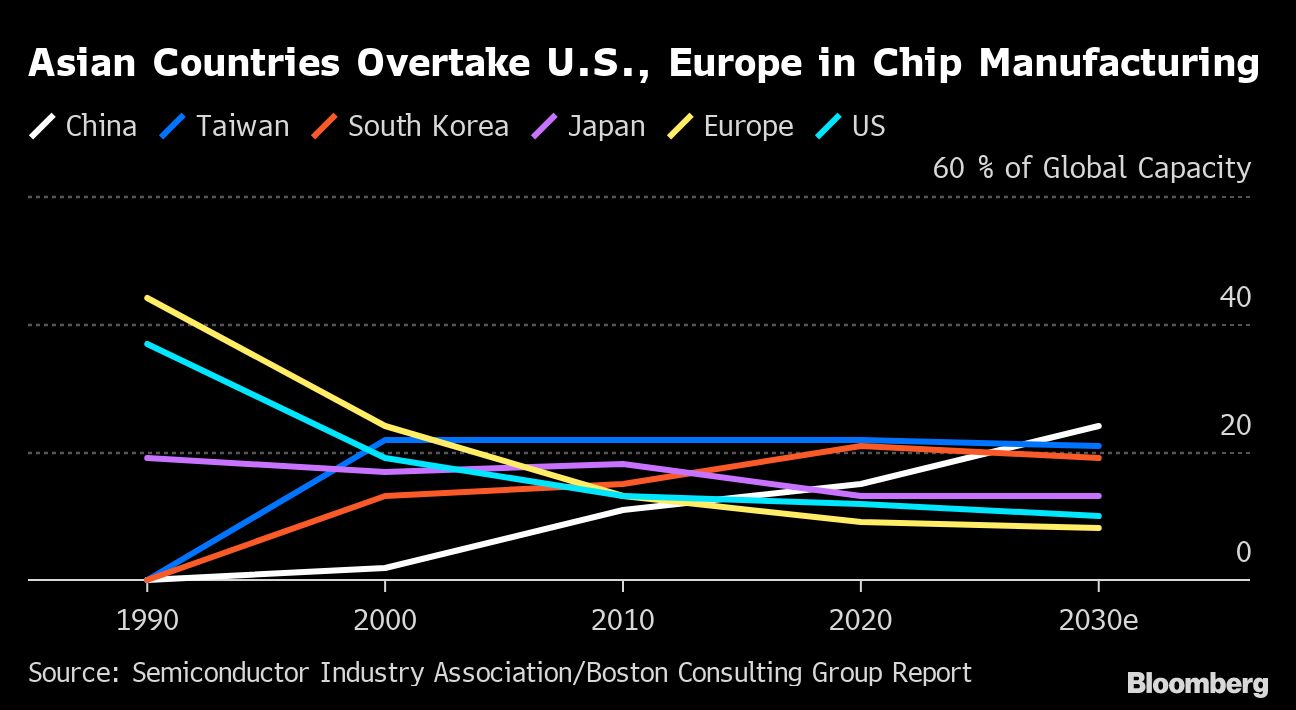 Among the goals outlined in Tuesday’s report is an effort to entice more private investment from abroad and leverage U.S. diplomatic muscle. TSMC and Samsung are currently in talks to secure vital incentives to build advanced chip plants in the U.S., which would instantly elevate both U.S. semiconductor know-how and capacity.

The Netherlands is home to ASML Holding NV, which enjoys a virtual monopoly over the market for advanced extreme ultraviolet lithography equipment — essential in making the most advanced 5-nanometer chips and beyond. It’s been unable to ship any EUV systems to China as the Dutch government hasn’t renewed its export licenses for Chinese customers. Meanwhile, Japan’s Tokyo Electron Ltd. and Nikon Corp. supply sophisticated gear to first-tier chipmakers such as Intel and also Chinese companies.

Beijing fired back against Biden’s blueprint and the Senate bill, saying the U.S. was creating an “imaginary enemy.” While China is committed to “developing a win-win relationship” with the U.S., the legislation “distorts the facts, and slanders China’s development path and domestic and foreign policies,” Foreign Ministry Spokesman Wang Wenbin said on Wednesday during a regular press briefing in Beijing.

For more on the global chip saga:
How a Chip Shortage Snarled Everything From Phones to Cars
TSMC Is Stuck in the Middle of a Global Panic Over Chip Supply
Chip Shortage Forces Carmakers to Strip Out High-Tech Features

Biden’s plan is in part a reflection of a growing concern globally. The world’s heavy dependence on a handful of crucial Asian-based chip suppliers like TSMC was exposed this year after a global supply crisis idled factories at several U.S. automakers, threatening to cut $110 billion in sales. The European Commission set out plans in May to diversify supply chains and carry out regular sector reviews to tackle its lack of industrial independence in strategic areas including semiconductors.

China’s rising threat is the other long-term danger. The country remains at least several generations behind Taiwan and the U.S. in chip design sophistication. But China’s track record of being the world’s factory floor and vast reams of data could give it a leg up in certain pivotal segments, such as the labor-intensive but vital work of assembling and packaging semiconductors, or the younger field of AI-enabled chips.

In a sign of the urgency of that effort, the nation’s top semiconductor executives and senior policy makers converged on Nanjing this week for the three-day World Semiconductor Conference to brainstorm future approaches and cement alliances.

Advanced chip packaging offers China a chance to push performance by combining a number of chips in one package, but it’s ultimately not a replacement for fundamental semiconductor development, Bain’s Hoecker said.

“China has been chasing the rest of the world over the past decade. But as the performance of chips increases significantly slower today than in previous years, it’s for sure that China will be able to close the gap with the leaders,” said Wu Hanming, a member of the Chinese Academy of Engineering, a state-backed research institute that houses elite scientists.

In the short term, Biden’s blueprint promises a shot in the arm. A $50 billion federal program to incentivize domestic semiconductor manufacturing would add $24.6 billion annually to the U.S. economy, the Semiconductor Industry Association and Oxford Economics estimate. It would generate 280,000 permanent jobs, of which 42,000 would be employed in the semiconductor industry directly.

“The U.S. semiconductor goal is simpler than China’s. It only needs to reshore chip manufacturing, and is already well on the path to doing so,” said Dan Wang, technology analyst at Gavekal Dragonomics. “China’s challenge is to master not only the manufacturing of chips, but also invent the equipment — which are some of the most complex instruments in the world — to produce them.”