And Americans continue to buy more stuff from abroad than ever.

A supply chain crunch that stretches from overseas manufacturers into American ports and retail stores threatens the American holiday shopping season. President Joe Biden and his administration have been working for months to smooth out bottlenecks, but his power to influence what is almost entirely a private-sector problem is limited.

While Republicans point to the supply chain as further evidence the president is mismanaging the economy, the issues are deep-rooted. Overwhelming volume generated by record, pandemic-induced consumer demand is swamping a system that was already creaking under the weight of high demand, low investment, labor shortages and regulatory battles.

It now costs as much as $25,000 to import a 40-foot container from Asia, up from less than $2,000 two years ago. Here’s where the supply chain is under stress in the U.S., what its executives, workers and experts say Biden could do about it, and what he’s actually doing.

The Biden administration is trying to iron out short-term bottlenecks and build long-term capacity. “The CEOs we’ve been talking to acknowledge this is long overdue, but they didn’t know where to start, and they didn’t want to be the one to stick their necks out on it,” John Porcari, Biden’s port envoy, said Thursday.

America’s ports face a crush of deliveries, forcing ships to wait offshore at length to unload. The Port of Los Angeles, which together with the nearby Port of Long Beach is the busiest in the U.S., says volume is up 26% this year over 2020.

As of Thursday, the Port of Los Angeles had 39 container vessels at anchor, compared to 32 a month earlier.

Ports — a crucial step in the domestic supply chain — have been a focus of the Biden administration. Last week, the president announced an agreement between the Port of Los Angeles and one of its unions to begin operating around the clock to ease congestion, following the Port of Long Beach.

Union Pacific Corp. began receiving trucks from the port around the clock shortly after Biden’s announcement. The Los Angeles port’s executive director, Gene Seroka, said on CNN Oct. 18 that its backlog had begun to ease. 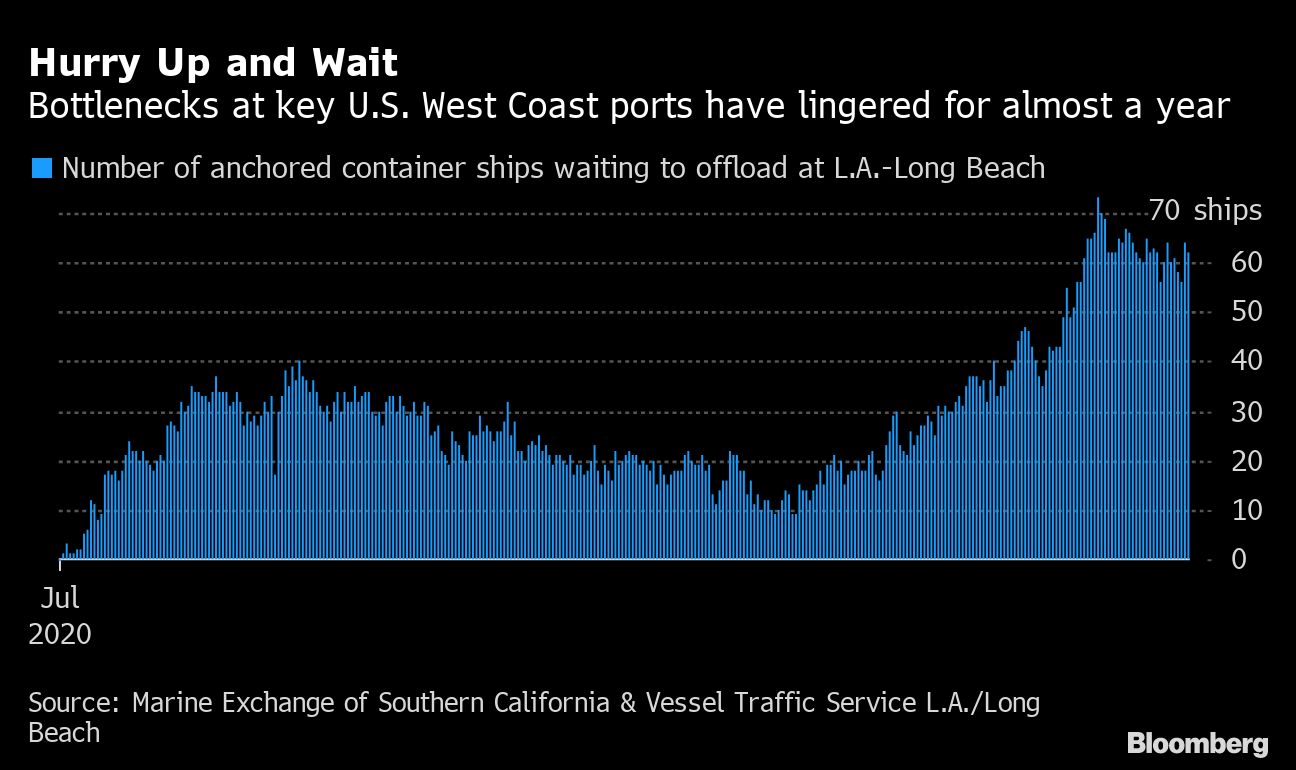 Recent congestion at the Port of Savannah, Georgia, has prompted some shippers to divert cargo to the nearby Port of Charleston. That can relieve ports, but creates new stress on local trucks and warehouses if they aren’t prepared for the increase in volume.

Biden has encouraged ports to seek federal grants to improve transportation links between different parts of the chain, like ships and trucks. Nathan Strang, director of ocean trade lane management at Flexport, said the administration could make longer-term improvements by expanding barge or rail service between nearby ports, allowing them “to operate as one large port group.”

Biden has been pushing congress to pass a bipartisan infrastructure plan that includes funding for ports.

That bill “provides sorely needed funding for basically rebuilding infrastructure investments that your parents and grandparents made,” Porcari said, adding that Biden’s separate “Build Back Better” package also has measures that would help. “You can make a very strong case that, as a nation, we should have done this a long time ago.”

Port truckers are typically independent contractors, without the benefits and protections of unionized transport sectors or even major companies with shipping divisions, like Amazon.com Inc. Their jobs require them to line up for hours to pick up cargo, and they’re paid only when they move it.

“The port truck driver, for decades now, has basically been the slack adjuster in the whole system,” said Steve Viscelli, an economic sociologist with the University of Pennsylvania who studies labor markets and supply chains. The entire system, he said, is built around free labor from truck drivers as they wait for containers.

The Teamsters union says Biden should try to encourage organization of port drivers so that they can bargain for better pay and benefits.

But the president has instead focused on trying to produce new drivers by streamlining licensing. The White House says an average of 50,000 commercial drivers licenses and learners permits have been issued each month this year, 14% above 2019 and far above 2020 levels, when the pandemic shuttered training programs.

The freight surge is greatly benefiting trucking companies and their shareholders. Third-quarter sales at JB Hunt Transport Services Inc., the nation’s largest long-haul trucker, jumped 27% from a year ago and operating income soared 56%, driving shares to record highs this month.

But a shortage of workers has jammed up rail yards and kept shippers from unloading in a timely manner at their warehouses, increasing gridlock. There is no sign of those bottlenecks improving, as employers everywhere compete for scarce labor.

“We believe the bottlenecks on the West Coast are going to compact and even intensify further peak-season capacity needs into November and December,” Shelley Simpson, chief commercial officer for Lowell, Arkansas-based JB Hunt, said in an earnings call.

Trucking companies say that the Biden administration’s impending requirement that most employers mandate COVID-19 vaccinations will further hurt their hiring efforts, but the president has shown no indication he’ll retreat or soften the rule for firms in the supply chain.

Empty shipping containers have piled up at trucking companies in Southern California because of restrictions on when and where they can be returned to ports, said Matt Schrap, chief executive officer of Harbor Trucking Association, a coalition for carriers that serves ports on the West Coast. In the short term, freeing up space for empty containers would free up crucial transportation equipment such as chassis, which are hooked to trucks to move loaded containers at ports.

“We are running out of space,” said Schrap. “These containers are just being stacked on top of each other.” 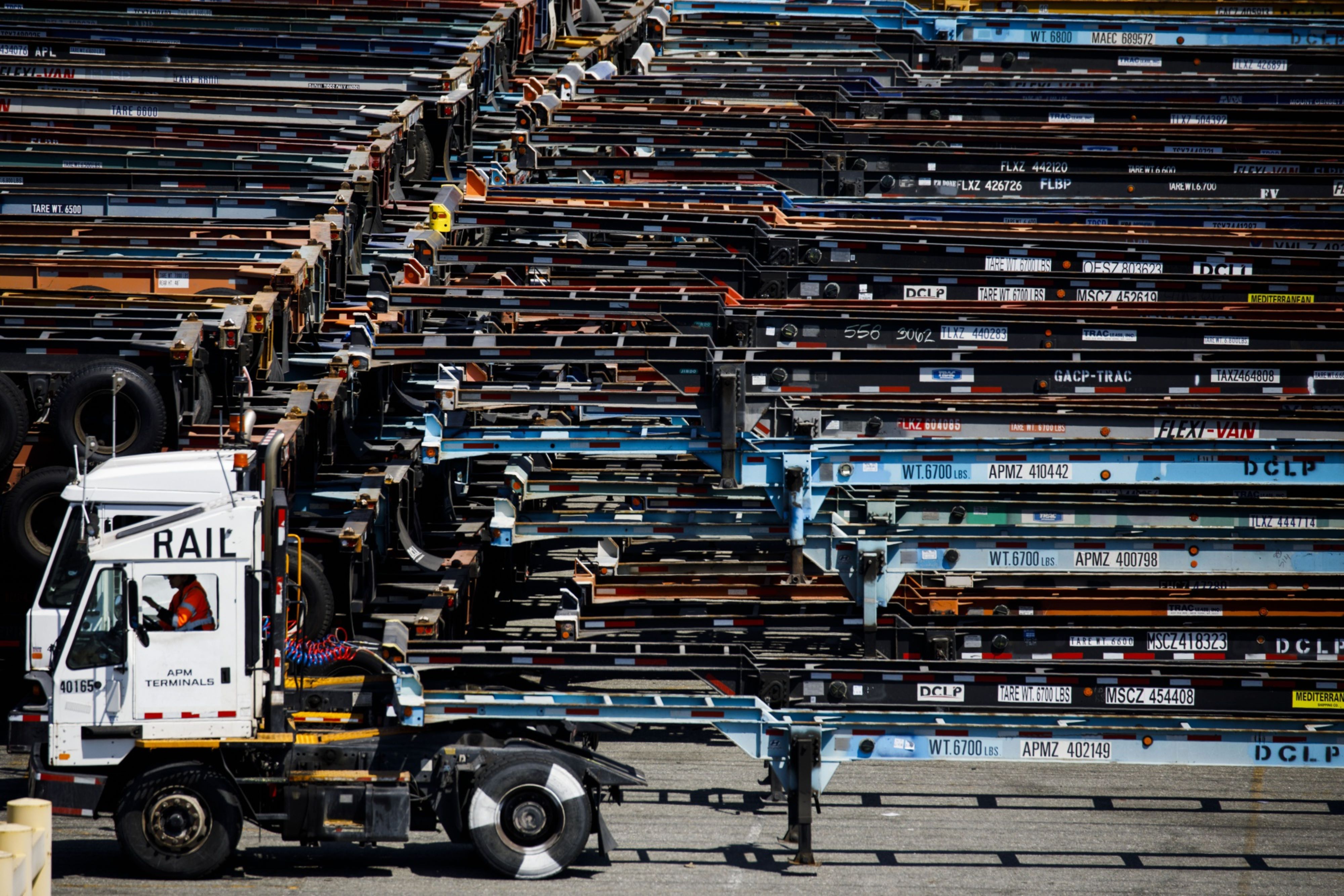 Chassis are their own wrinkle in the supply chain. Many of them are stuck under empty shipping containers, while government regulations have made it more difficult to import new chassis from overseas, said Weston LaBar, head of strategy at Cargomatic Inc., a digital freight brokerage company.

The Coalition of American Chassis Manufacturers called removal of the tariffs to alleviate supply chain bottlenecks “misguided” in a letter to the Biden administration last week.

U.S. exports have also become backlogged as some ships whisk empty containers straight back to Asia, seeking to reload them with more profitable imports as fast as possible.

While exporters have grumbled and agriculture interests have backed legislation to require carriers to accept certain bookings, the prospect of congressional action is unclear.

The chairman of the Federal Maritime Commission, Daniel Maffei, downplayed the likelihood of regulatory or enforcement intervention in the meantime, saying last week that, “We still have a market-based system,” according to the Journal of Commerce Online, a trade publication.

Porcari said that the administration is speaking directly with ship owners that are offering cash incentives for empty containers to impress on them the importance of filling them with U.S. exports.

Exports in September at the Port of Los Angeles were down more than 40% from the same time last year and the lowest since 2002, according to port data.

“If we don’t deliver dependably, affordably, our foreign customers have plenty of options and will go to those other countries and that’s happening now,” said Peter Friedmann, executive director of the Agriculture Transportation Coalition, a trade association for agricultural exporters.

Shippers and transportation companies are meanwhile in a lobbying fight in Washington over fees carriers charge for containers held at ports and warehouses.

Friedmann’s group wants the FMC to enforce guidelines related to the fees, called demurrage and detention. Last week, the FMC issued a letter urging ocean carriers to adopt best practices around the fees to promote clarity. The commission’s audit team is engaging carriers and “pursuing other actions” to achieve compliance, according to the letter.

The Association of American Railroads has pushed to be able to charge progressively higher storage fees for freight that languishes in railyards, to make sure shippers pick it up quickly. Shippers say they shouldn’t be penalized when they aren’t able to obtain transportation for their goods.

Meanwhile, warehouse space is at an all-time low. Building new warehouses takes a minimum of two years and as many as nine in parts of California, where the industry says regulations are more strict.

“Many of our warehouses report that even their docks are full due to no availability of containers or carriers for outbound shipments,” the International Warehouse Logistics Association wrote in a submission to the Department of Transportation.

“U.S. importers and exporters are paying the highest ocean shipping rates ever recorded for the worst service levels ever experienced,” the trade association said.

The AAR has said U.S. rail terminal capacity and staffing is sufficient — a statement disputed by other industries in the supply chain — so long as shippers quickly pick up their containers. BNSF Railway Co. has created an incentive program for weekend off-loading of trains and has added workers at what are called “intermodal facilities” — the joints of the supply chain, where goods are transferred from train to truck or other transport.

The industry has called on the entire supply chain to adopt around-the-clock operations.

The Federal Railroad Association is issuing regulatory COVID-19 waivers to allow railroads more flexibility and discussing with the industry other measures.

Retailers, the last leg of the chain before consumers buy goods, are working to bypass transportation delays to ensure the holiday shopping season isn’t disrupted. Target Corp., Costco Wholesale Corp. and Best Buy Co. have all chartered cargo ships in a bid to speed goods across the Pacific.

So has Walmart Inc., which is also routing shipments through less congested ports, expanding its storage and relying on stores to fulfill some online orders, according to a company statement earlier this month.

Driving it all is pent-up demand from U.S. consumers and shifts in their behavior. Hunkered down during the pandemic, Americans have spent more on material goods and less on leisure and experiences.