President Joe Biden wants to break a logjam at U.S. ports and stave off a holiday season of shortages and delays — bottlenecks that officials and stakeholders say extend far beyond the reach of the White House.

Flotillas of cargo ships anchored off major ports and stacks of shipping containers piling up on wharfs have ratcheted up concern that American shoppers may be greeted by empty shelves when the holiday season kicks off next month.

That’s led the Biden administration to accelerate efforts, and highlight previous ones, to smooth the flow of goods through the economy. His options are scant and amount to serving as a deal broker.

On Wednesday, Biden announced that the Port of Los Angeles would begin operating 24 hours a day and 7 days a week, and that retailers had pledged to step up efforts to move goods.

Yet precedent suggests that extending port hours won’t solve the problem alone, as delays are also tied to backlogged demand from the pandemic, a diminished workforce and snags at each step of a shipping route, not just ports. Biden himself made Wednesday as much a call to arms as a celebration of a fix.

“This is a big first step and it’s feeding at the movement of materials and goods through our supply chain. But now we need the rest of the private sector chain to step up as well,” Biden said at the White House Wednesday. “And if the private sector doesn’t step up, we’re going to call them out.”

The Port of Los Angeles announcement came after discussions with the administration and labor unions, a step the White House called overdue. Six companies, including FedEx Corp and United Parcel Service Inc., also committed to expanding their delivery schedules.

The prospect of bare store shelves during the holiday season is a political nightmare for the president, who’s already fending off accusations from Republicans that his policies have contributed to a surge in inflation.

But the supply chain troubles are in part a consequence of the robust U.S. recovery from the pandemic. U.S. imports, measured by shipping container volume, are running at a record level so far in 2021, according to data collected by Panjiva, the supply chain research unit of S&P Global Market Intelligence. 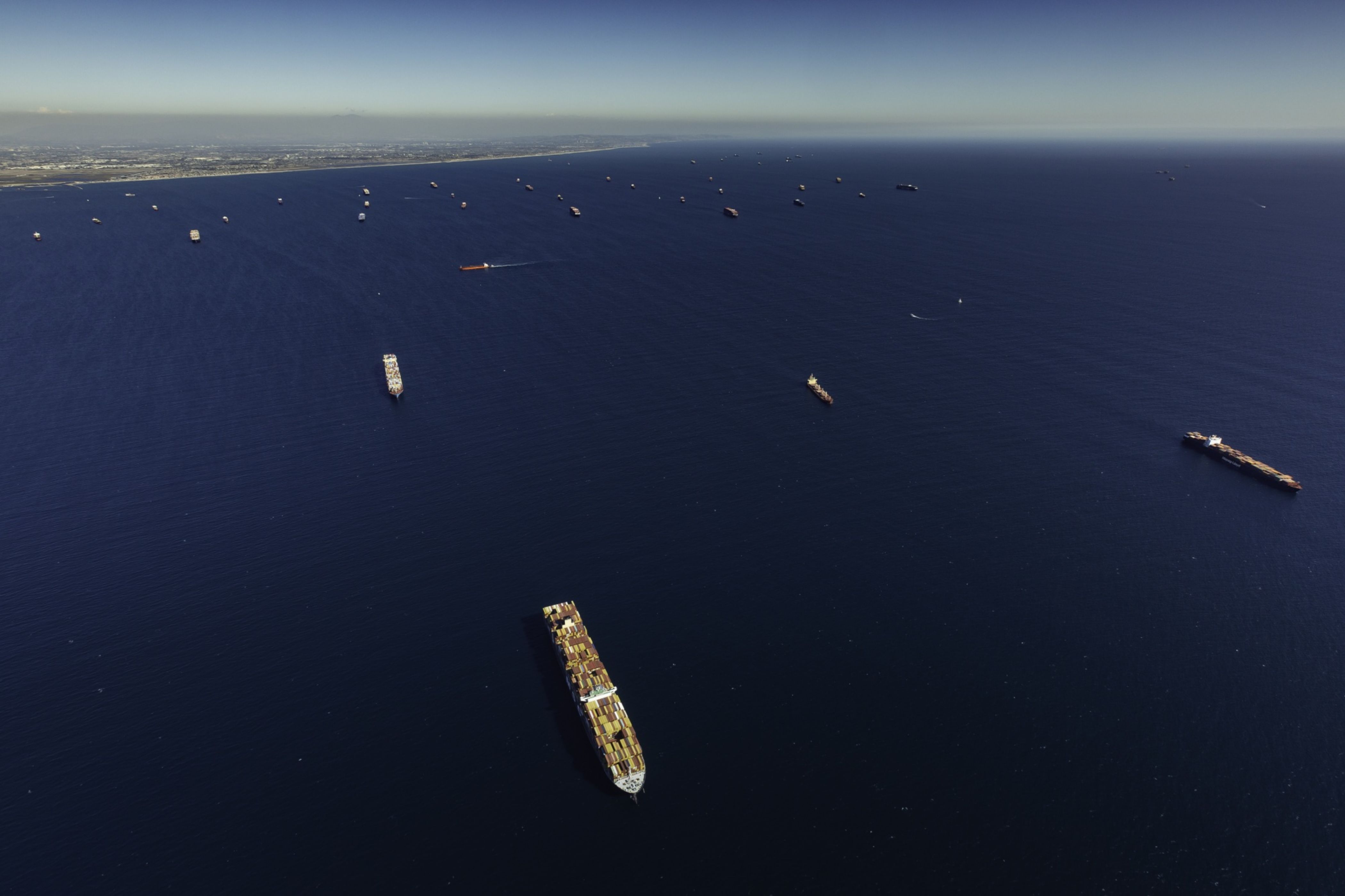 Container ships moored off the Los Angeles and Long Beach ports in Long Beach, California. An unremitting shipping logjam in the waters outside of Los Angeles has already contributed to higher costs, delays and intermittent goods shortages across the U.S. Now, it could be to blame for California's biggest oil spill in 27 years. Photo: Bloomberg.

“We’ve really been seeing a peak season all year. What we are kind of talking about is logistics networks operating at maximum capacity,” said Eric Oak, a researcher who authored the S&P report.

U.S. imports by volume last month were 5% higher than in 2020, and fourth quarter imports are on pace to beat the record-setting levels of 2020, Panjiva found.

The White House has been tracking kinks in the supply chain since Biden took office, officials say. In February, he signed an executive order to review supplies of critical goods, including microchips and pharmaceuticals.

In June, the White House created a task force to coordinate policies to address supply chain transportation issues across agencies and to work with logistics-related companies, including ports, railroads, trucking companies, warehouses and fulfillment centers.

But the U.S. supply chain is largely in the hands of businesses, limiting the administration’s options to directly influence it.

“This is a set of private-sector systems, a global one at that. But we have a role to play as an honest broker, bringing together different players who, sometimes surprisingly, don’t always coordinate with one another,” Transportation Secretary Pete Buttigieg said Wednesday on MSNBC.

Even after the announcement, the underlying issues ensnaring shipments were in plain view. Port of Los Angeles Executive Director Gene Seroka, who visited the White House on Wednesday, said the takeaway was a “commitment from industry leaders responsible for moving goods on behalf of American consumers and businesses to open up the capacity needed to deliver.”

Meanwhile, Teamsters General President Jim Hoffa, who participated in one of the White House events Wednesday, said working conditions for port truck drivers remain poor and constrain any recovery. “They are not paid a living wage and are largely treated as indentured servants,” and should be allowed to unionize, he said in a statement. “Nothing will change until that happens.”

Companies including FedEx, WalMart Inc., Samsung Electronics Co. Ltd., Home Depot Inc. and Target Corp. “are using more off peak and nighttime hours to increase throughput,” White House Press Secretary Jen Psaki said. “These improvements will move more goods faster, including toys, just in case you were wondering — my kids are — and furniture that Americans purchased online or at their local small businesses.”

Target assured customers — and investors — in a blog post on Wednesday that it’s prepared for the holiday season.

“Even as unprecedented supply chain challenges continue to impact retailers and industries across the globe, including the situation at our nation’s ports, we’re ready to deliver the easy, inspirational holiday shopping experience our guests love” the company said, noting that it’s operated 24/7 supply operations “for years, including at the ports.”

While the expansion of hours at Port of Los Angeles should help ease container handling, it’s just one piece of the puzzle, said Michael Tran, managing director for digital intelligence strategy at RBC Capital Markets.

“If you go further downstream, beyond just what’s happening at the shipping port, there are labor shortages that resonate throughout the rest of the supply chain, like trucking, warehousing,” Tran said. “From that angle, today’s headline goes to try to rectify the first step, the first step of many in a convoluted supply chain.”

A recent report by Tran’s team found that Port of Los Angeles/Long Beach ranks last among 22 of the world’s largest and most prominent ports in the time it takes to discharge a ship.

Some of the nation’s other large ports are expanding hours, but the challenge is getting trucking companies and warehouses open at the same time, one transportation sector official said, speaking on condition of anonymity.

Ports need more space to store containers, including refrigerated ones that require electricity, and land is at a premium, the official said. Ports want the White House to coordinate action with other areas of the industry.

A pilot program that began last month, offering 24-hour container operations at the Port of Long Beach, saw zero uptake in the newly open period between 3 a.m. and 7 a.m. during its first two weeks.

The impact of Wednesday’s announcements is relatively small. An additional 3,500 containers per week will move at night through the end of the year, the White House said. The port moved more than 950,000 containers in August.

Much of the administration’s early attention was on boosting the supply of critical goods, including supplies needed for making COVID-19 vaccines, semiconductor chips riling automakers and tech companies, and fuel following a ransomware attack that cut off supplies on the East Coast. Its efforts extended to food, with the White House saying that consolidation in the meat processing sector has left it too vulnerable to hiccups and price hikes that are passed on to consumers.

The Biden administration’s options to address the bottlenecks are only on the margin, said Phil Levy, chief economist at Flexport, a freight forwarding company.

“I don’t think they’re going to be able to resolve this crisis,” he said. Current demand for goods doesn’t lend itself to quick fixes in a system with little excess capacity, he said. “This all just got swamped with an extraordinary level of demand.”