Home » Lithium Nationalism Is Taking Root in Region With Most Resources

Lithium Nationalism Is Taking Root in Region With Most Resources

Politicians in Latin America, a region that accounts for more than half the world’s lithium resources, are looking to increase the role of the state in an industry that’s crucial for weaning the world off fossil fuels.

In Argentina, state energy companies are entering the lithium business as authorities make a bid to develop downstream industries. In Chile, a leading presidential candidate wants to do something similar just as the nation drafts a new constitution that may lead to tougher rules for miners. In Mexico, the government is studying the possibility of nationalizing lithium prospects.

To be sure, no one in power is talking about expropriating assets in production and much of the anti-investor rhetoric in Chile is coming from opposition groups. Still, by exacerbating inequalities and exposing supply-chain vulnerabilities, the pandemic is stoking resource nationalism that could lead to less favorable conditions for producers just as they expand in a nascent lithium-ion battery boom.

“Country and resource reliability is something that auto and battery companies look at,” said BTG Pactual analyst Cesar Perez-Novoa. “So it is a risk.” 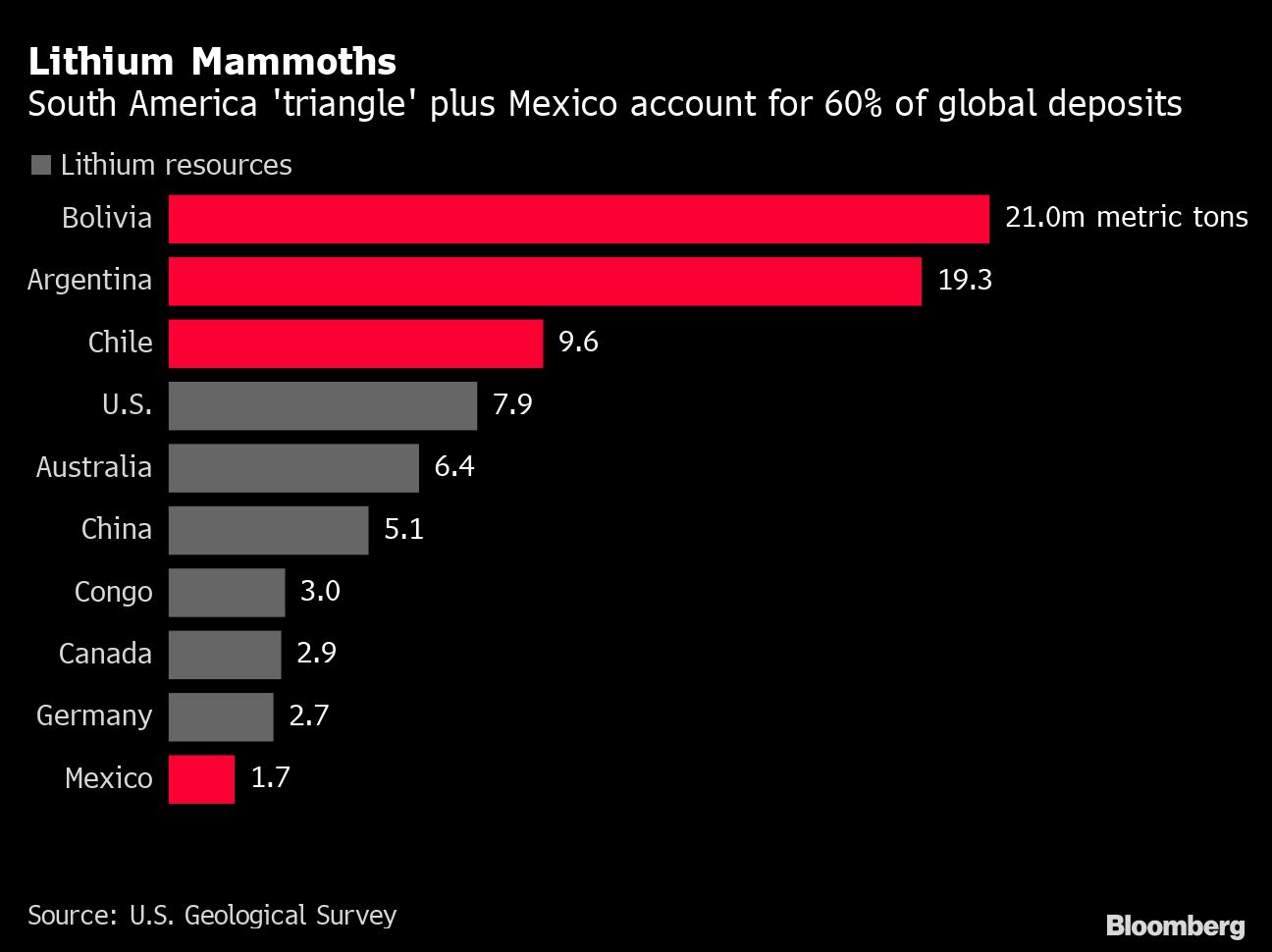 Argentina’s state-run oil driller YPF SA confirmed this month that it will explore for lithium and get involved in the bid for battery production through a new unit — a similar strategy as it used to diversify into renewable energy.

Another state energy company, Ieasa, whose role President Alberto Fernandez is reinvigorating after the previous government sought to privatize many of its assets, has said it will incorporate lithium into its business strategy, without elaborating.

Lithium-producing countries have had little success adding value to their raw-material industries given their distance from demand centers and sometimes adverse business environment. In the case of Bolivia, requirements to invest downstream have been one of the barriers to getting lithium out of the ground in the first place.

Argentina is banking on close ties with China, its lender of last resort, to open the door to the dream of local battery and electric-vehicle plants. Argentine officials have been in talks with Gotion High-Tech Co. and Ganfeng Lithium Co.

Adding fuel to the fire in Argentina is a bill drafted last year by lawmakers from ruling party Frente de Todos that looks to declare lithium a “strategic resource.” Still, the bill isn’t currently being considered, a party spokeswoman said.

In Chile, the top lithium supplier after Australia, a process to rewrite the constitution is expected to include a debate over how to capture more of the sector’s profits, stricter licensing requirements and the classification of water as a national asset for public use.

It’s unclear whether a new constitution could shake up property rights given the state is already the owner of minerals, said Renato Garin, a professor at the University of Chile’s law school, who was elected to the convention drafting the charter. The shift will likely lie instead in environmental rules as concerns grow about the impact of lithium mining in the Atacama salt flats.

“What the new constitution will push is a leap away from mining capitalism to encourage more investment in technology,” Garin, an independent left-leaning member of the assembly, said in an interview. “How to produce without destroying.”

The strongest comments have come from Mexico, where the government is studying state control of assets. Mexico doesn’t produce lithium yet and, according to BTG Pactual analysts, the rhetoric is unlikely to turn into action. But it still stokes uncertainty.

Bolivia is also trying to move forward with a state approach to developing its vast deposits. After rolling out a series of pilots over the past decade — including giant evaporation ponds to replicate the brine extraction method used in Chile and Argentina — the land-locked nation is turning to new technologies.

Bolivia has called for bids to test direct lithium extraction techniques, or DLE, with the winners scheduled to be announced in the coming weeks just as the state lithium company and its partners wrap up work on prototype processing and battery plants. Still, Bolivia’s DLE and downstream experiments hold no guarantees for a significant increase in production anytime soon.