After weathering earlier pandemic waves better than other regions, the fast-spreading delta variant has thrown into turmoil factories and ports in countries that were once among the most successful containing the virus.

The snarls in Asia — where the United Nations estimates around 42% of global exports are sourced — risk twisting their way through global supply chains just as shipments would usually ramp up for the Christmas holiday shopping season.

As earlier snags have shown, problems that start in Asian ports can ripple slowly, showing up later as delays in places like Los Angeles or Rotterdam and higher prices for consumers.

The flare-ups also worsen an already tortured year for exporters, with shipping costs sky-high due to a shortage of containers and as raw materials such as semiconductors become pricier and difficult to source amid red-hot demand. 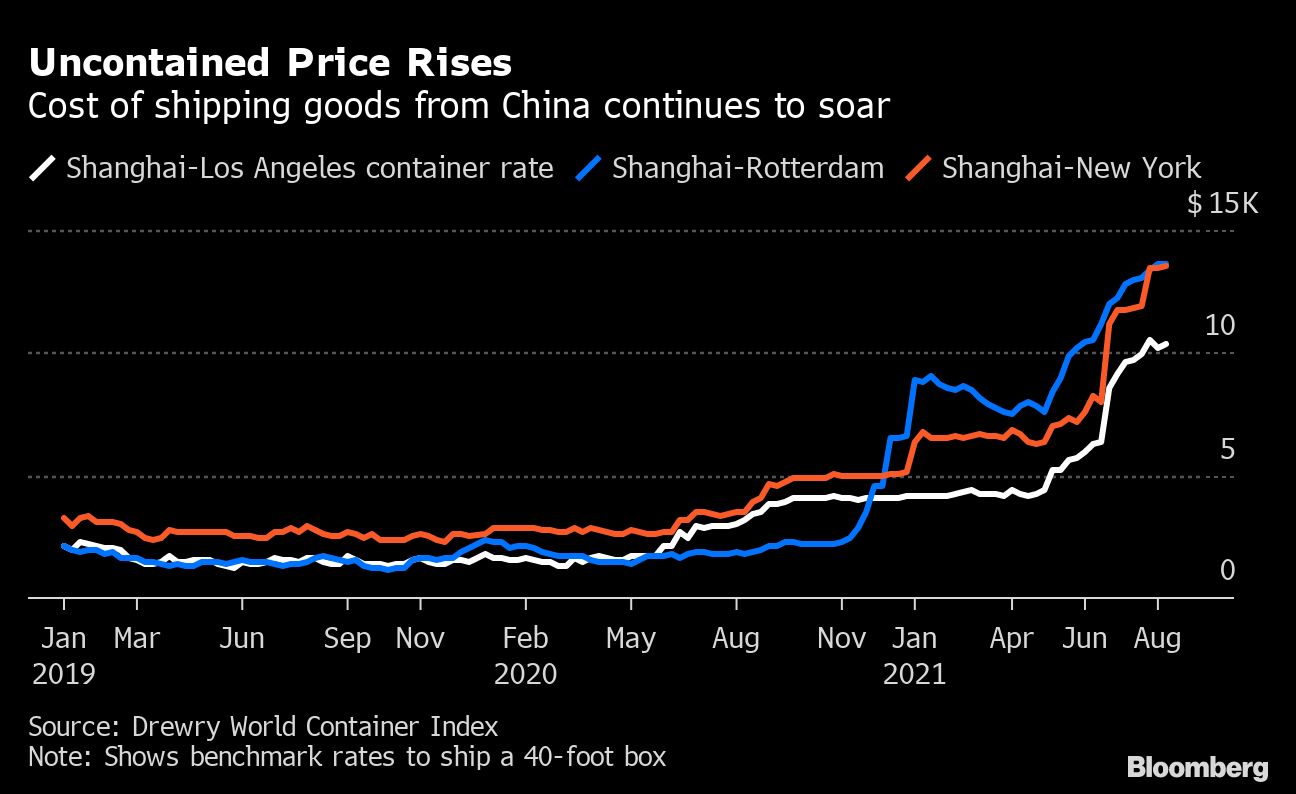 “Delta is likely to significantly disrupt trade in Asia,” said Deborah Elms, executive director of the Singapore-based Asian Trade Centre. “Most of the markets have been fortunate in managing Covid well so far. But as Covid continues to spread, this lucky streak is likely to end for many locations.”

In China, the world’s third-busiest container port was partly shut recently, while in Southeast Asia — among the worst-hit regions — factory executives have stalled production of electronics, garments and scores of other products.

At stake is an export boom that shielded trade-driven economies during the pandemic and was expected to fuel a broader rebound. The World Trade Organization had forecast Asia to lead an 8% rise this year in global goods trade.

Meanwhile, the supply choke will fuel concerns that rising inflation for Chinese producers or U.S. consumers will prove more than transitory, testing expectations among policymakers for a near-term cooling in prices.

The delta variant — as contagious as chickenpox — infiltrated China’s tough border defenses, seeding the first cases for months in places like Beijing and Wuhan. Indonesia is leading Southeast Asia in cases and deaths, pushing the region toward being among the worst-hit globally as vaccination rollouts lag.

While China’s cases are relatively low, its zero-tolerance approach has ensnared the Meishan terminal in Ningbo-Zhoushan port, where all inbound and outbound container services were halted Wednesday after a worker became infected.

That shutdown follows the closure of Yantian port in Shenzhen for about a month after a small outbreak, which had ripple effects for international shipping.

In Southeast Asia, manufacturing managers saw a slump in activity last month as critical exporters struggled to keep factories running, a sign that Covid might finally be making a dent in the region’s resilient trade.

While Indonesia, Malaysia, the Philippines, Vietnam and Thailand account for a combined 5.7% of global exports, they can greatly impact bigger economies like the U.S. and China, particularly in electronics, according to estimates by Natixis. China imports 38% of its data processing machines and 29% of its telecommunication equipment from the five countries, while the U.S. depends on half its semiconductor imports from the bloc.

That extends to export hubs of Japan and South Korea, which have remained mostly on track. Samsung Electronics Co., for instance, last month said revenues in its mobile phone business have been hit by the outbreak in Vietnam.

Vietnam’s government has taken extreme measures to minimize the hit to exports — a broad basket that includes electronics and garments — as new cases jump to about 16,000 daily, from single digits in April. Authorities have ordered manufacturers to allow workers to sleep overnight at factories as the share of the population fully vaccinated lingers around 1%, near the bottom of the Bloomberg Vaccine Tracker.

It’s not been enough for companies like Harco Shoes and Materials Manufacturing Co., in Hung Yen province near Hanoi.

“Things are getting worse and worse as most factories in southern provinces had to stop operations and companies in the north have been struggling to maintain some production,” Pham Hong Viet, chairman and chief executive officer, said in a phone interview. “The country’s entire supply chain has been seriously disrupted.”

Economists are already paring their growth forecasts for Asia as real-time indicators show a hit to consumption and other activity. While “nowcast” readings from Bloomberg Economics show the global economy is poised for acceleration this quarter, the delta flare-up in China alone is affecting areas that account for more than one-third of its gross domestic product.

The virus surge comes as exporters continue to complain of sea freight costs that can be multiples of what they were before the pandemic, mostly due to a shortage of shipping containers. The Drewry World Container Index reached $9,421.48 per 40-foot container as of Aug. 12 — about 350% higher than the same time a year ago.

“The major challenge for us is the high international shipping costs, which are double or even triple what they were pre-pandemic,” said Lanm Lai, director of foreign trade at CNC Electric in China’s Zhejiang province, whose products include meters and wall switches.

“Last year, during the peak of the pandemic, we thought it would be short term. But looking forward, I don’t think there will be a substantial change soon,” he said.

Executives like Raymond Ren — who runs Pinghu Kaixin Plastic Industry Co. Ltd., which makes travel bags and suitcases and also in Zhejiang — aren’t hopeful for a course correction anytime soon. “I don’t think anything could reverse this in the short-term,” he said.

“You can’t predict anything during this pandemic.”

Amazon Is Shuttering Some India Businesses Amid Global Cuts