How Farmers Around the World Are Battling ‘Post-Apocalyptic’ Food Crisis

For Australian cattle farmer Jody Brown, the most chilling evidence of drought is the silence. Trees stand still, the warbling of birds gone. Lizards and emus have long departed, while kangaroo mothers, unable to sustain offspring, kick baby joeys from their pouches, leaving them to perish in the devastating heat.

“You just feel like you’re in some kind of post-apocalyptic scene,” 37-year old Brown said from her family’s ranch in Queensland’s central west. The constant dryness means her cattle herd has dwindled to around 400, down from 1,100 at its peak in 2002, and at times there have been no animals on the land at all. The native grasses, once green sustenance, have disintegrated into grey ash.

The world is facing a new era of rapidly increasing food prices that could push almost 2 billion more people into hunger in a worst-case climate crisis.

Confronting the dire predictions, farmers have begun to adapt. On Brown’s ranch in Australia, she’s experimenting with regenerative-farming practices better suited to drought. And across the globe, farmers are swapping crops, switching seeds, increasing irrigation and even putting face masks on their cows in the battle to both increase output and reduce their own emissions. Meanwhile companies including Syngenta Group, the Swiss agrichemicals giant, are developing new varieties for vegetables like cabbages that are more resistant to extreme weather.

“We’ve got to adapt,” Brown said. She’s exploring alternatives to traditional grazing methods that don’t push the land as hard, like grouping together livestock into tighter, more compact groups and rotating them quickly across paddocks.

“Potentially, there were always better ways of doing things, but you just didn’t notice because you weren’t put under the pressure that climate change puts you under,” she said.

It’s a fight against the floods, drought, frost and scorching heat that have plagued farms from Brazil to Canada and Vietnam, which scientists predict will only worsen in the decades ahead.

Global crop yields could fall about 30% because of climate change, while food demand is expected to jump 50% in the coming decades, according to United Nations’ estimates. Fisheries and water supplies are increasingly threatened, too, said Zitouni Ould-Dada, deputy director of the office of climate change, biodiversity and environment for the U.N.’s Food and Agriculture Organization.

One of the biggest challenges for farmers is that there isn’t currently the large-scale coordination or access to funds that would be critical to undertake the kind of massive transformation that’s needed.

“If you have to deal with millions of farmers around the world, that you have to coordinate, that’s a huge ask,” said Monika Zurek, senior researcher at University of Oxford’s Environmental Change Institute.

The U.N.’s FAO called on leaders attending the COP26 climate summit to pledge more global actions to help farmers scale up solutions. The group is targeting annual investments of $40 to $50 billion through 2030 to fund things like innovation in digital agriculture. 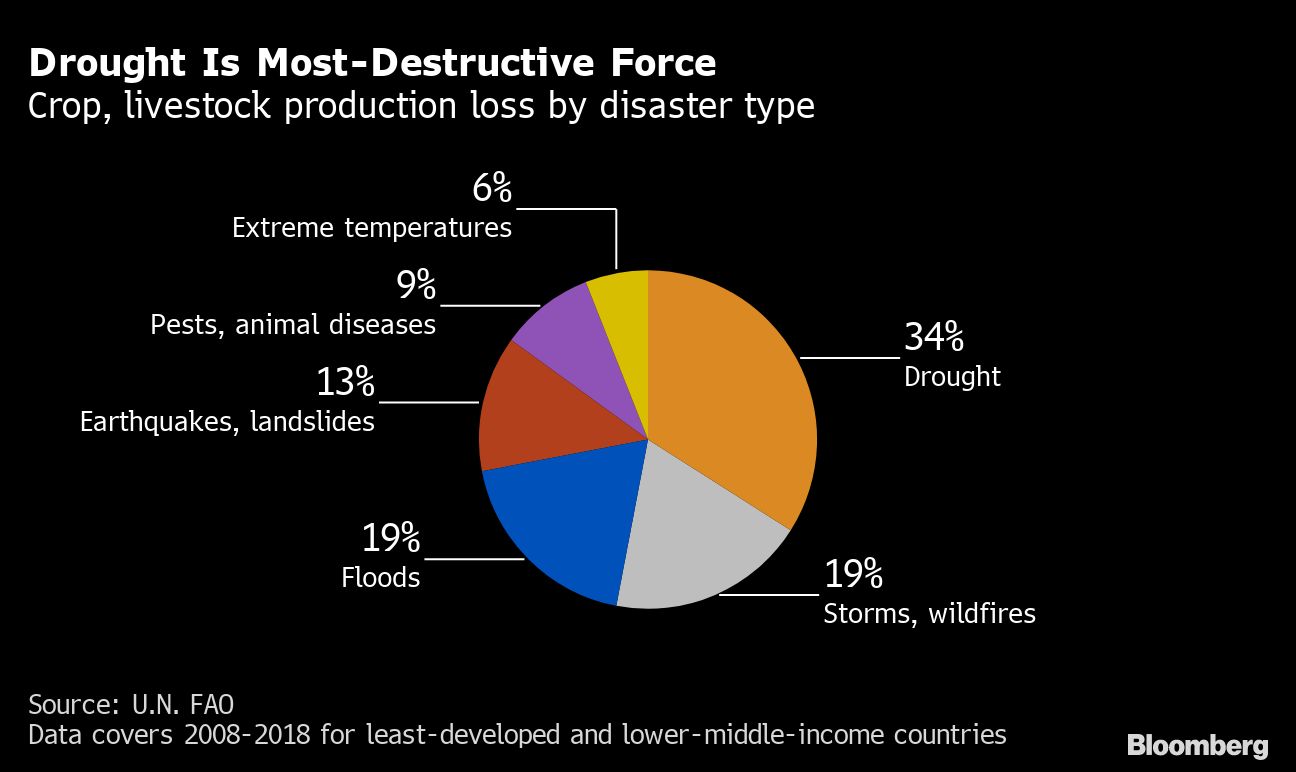 Without widespread change, the result could be a spiral higher for food prices that will hit importing nations particularly hard.

From Russia to India, here's an up close look at the measures being taken by farmers in countries across the globe.

Lucas Lancha Alves de Oliveira is making a drastic change on his farm in the countryside of Sao Paulo state. He’s ripping out half his coffee trees to plant corn and soybeans instead. It’s a bold move because the trees are typically an investment meant to last years, but Oliveira is being forced to change course after coffee crops were slammed first by drought and then an extreme frost — a toxic combination for the sensitive trees.

“We got seven months without rain,” said Oliveira, who runs the family-owned company Labareda Agropecuaria, focused on gourmet coffee sales. The drought was followed by the cold blast, which damaged 20% of the area. “Many trees that would produce a lot of beans were chilled by freezing conditions. The losses will be huge next year.”

But the shift won’t last forever. After next year’s harvest, Oliveira will start to replant coffee trees gradually, with an important change: the crops will be fully irrigated. It’s a huge upfront cost, but given the extreme drought he’s seen over several years, Oliveira wagers it’s worth the expense.

“We’ll only plant coffee with irrigation from now on,” he said.

Francois Slabbert, a farmer in the Northern Cape, said the shift in seasons is forcing grape growers to sow other crops like pecan nuts. Where winters usually occurred between mid-May and mid-August, it’s now not underway until about a month later, exposing grape farmers to frost that damages their crop.

While it takes as long as 11 years for pecan trees to start yielding nuts, the crop can be lucrative as about 95% of production in South Africa is exported, Slabbert said.

“It takes time, and there’s a huge economic impact to the shift,” he said. “But when you’ve done it, when you’ve completed it, it’s good in terms of the turnover.”

Meanwhile, for Japhet Nhlenyama, a cattle farmer in the eastern KwaZulu-Natal province, drought has gotten so bad that it’s left his livestock emaciated because there’s no grass to feed on. He’s considering giving up on farming. In previous years, he’s gotten some government assistance, but he hasn’t gotten any aid so far this year.

“My living livestock gets blown over by the wind and others are dead because of the drought and not having any food to eat,” Nhlenyama said. “We honestly don't know what we are going to do to survive.” 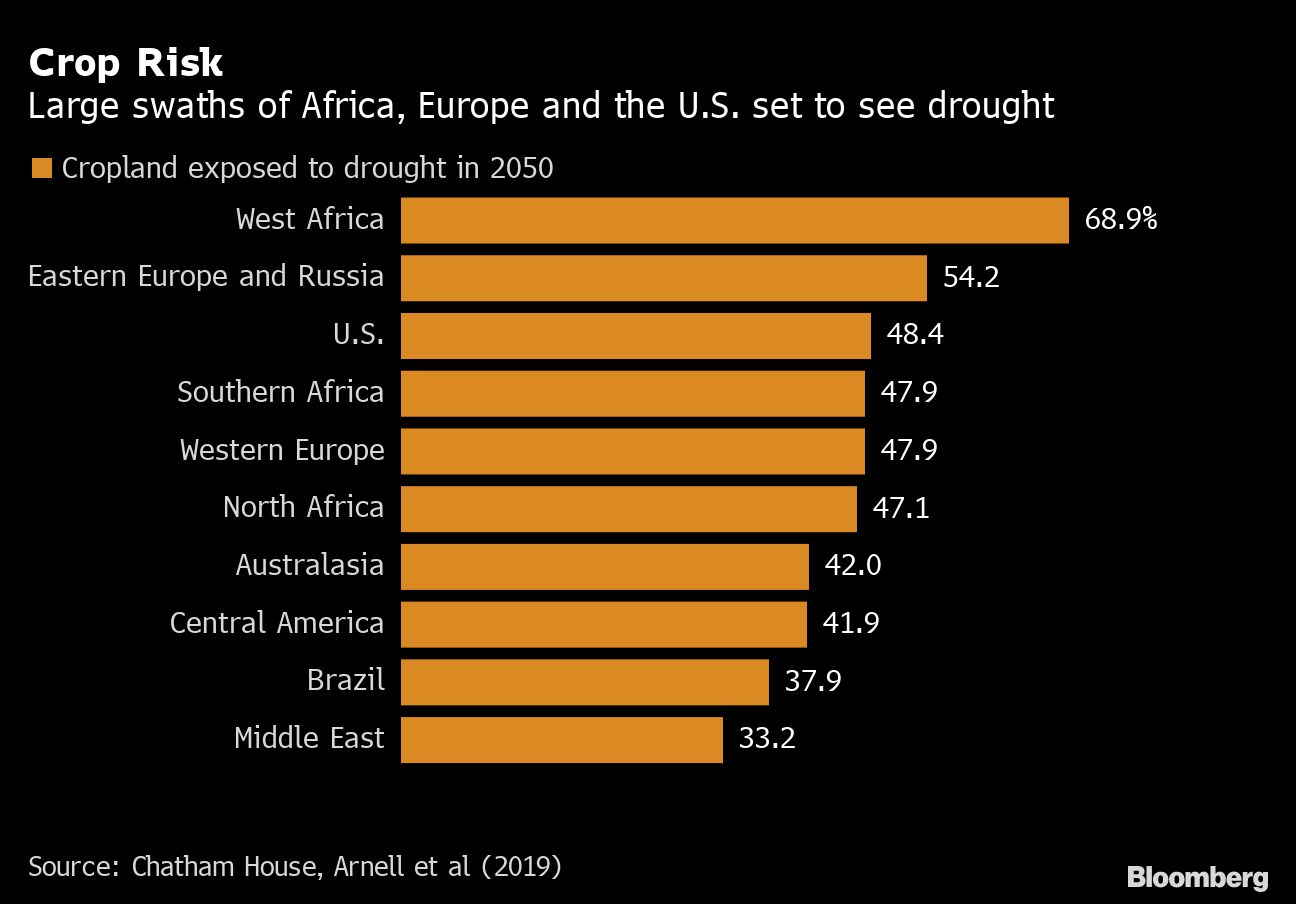 Evgeniy Agoshkin has been in agriculture for 20 years, growing wheat and corn along with other crops. Like many of the country’s farms, his fields had traditionally been in the country’s Voronezh region, south of Moscow. But prolonged drought over several years has prompted him to move some 750 kilometers (470 miles) to the northeast into the Ulyanovsk region. He bought 12,000 acres of land, following the advice of a friend who made a similar move. He’s still holding onto some land in Voronezh, and now flies between his two farms to manage the fields.

In Ulyanovsk and in some of Russia's northern regions, “people have started to plant grain, corn, sunflower seeds, which generally wasn’t possible 20 years ago,” Agoshkin said. “Now it’s all become possible.”

With drought gripping California, the biggest U.S. farming state, Fritz Durst planted less than half of the rice he normally would, leaving two of his five fields fallow. He’s not alone. Rice acreage across the state dropped this year to the smallest since 1992, another bad drought year.

In a region where dryness has become the new normal, Durst is working to trap water. He’s boarded up drainage pipes in the fields to hold the scant amount of rain that does fall. One day in October, for example, brought over 5 inches of rain to his fields, a bit more than what fell in the entirety of 2020. Durst will also plant cover crops, which can help enrich soils and prevent erosion. Still, in a part of the country that swings from one extreme weather event to the next, it’s hard for him to predict next steps.

The vineyard at the farm Samuel Masse’s family has run for more than 20 generations has been battered by both heatwaves and freezes in the past few seasons. This year’s grape yield dropped 70% from a spring cold snap, and the relentless weather extremes means he’s no longer willing to bet on just one crop, as the operation has done since World War I.

But Masses’s plans to plant 200 olive trees this autumn have been postponed by rains and financial constraints from the farm's frost losses, highlighting the challenges growers face in making such shifts. The grove might now go in next year, and he's also weighing planting figs, pomegranates or almonds in the future.

“We don’t know now what is a normal year because we always get something,” Masse said. “The problem now is how we do the shift and how fast we do it.”

Rice, one of the world’s major staples, is also a big emitter of methane, as its flooded fields block oxygen and allow bacteria to thrive. But farmers like Prasan Kumar Biswal in the east Indian state of Odisha are pioneering new methods. On half of his four acres, he carefully spreads out seedlings and alternates between wetting and drying the fields. The plant’s roots grow more deeply, and the yield improves.

Still, it’s not easy to stray from tradition. He still uses conventional flooding on some fields, and his cousin, Jagannath Biswal, only uses the practice on his. The old way helps to keep weeds at bay at a time when labor is too costly to manage them manually.

“Our forefathers have taught us about flooding the rice fields,” Jagannath Biswal said. “I have never tried to grow rice with less water.”

On the island of Sifnos, George Narlis is relying on historic methods to grow crops with increasingly scarce water. Rains are now rare after February and spring temperatures have gotten much warmer.

“This year for the first time in my life we didn’t have spring — we only had summertime. Many flowers and trees, apricots, died,” he said.

To supply his small farm and restaurant, he’s traveled the island collecting heirloom watermelon and tomato seeds that thrive in the arid conditions. It’s similar to techniques his parents and grandparents used, when they only had access to a small well.

Raffy Aromin, 43 years old from Cavite province south of Manila, said producing lettuce and cabbage has changed a lot in just the five years that he’s been farming. Extreme afternoon heat in October means crops start to wilt. As a solution, Aromin uses plastic that can protect against harsh UV rays to cover his vegetables. He produces as many as 200 kilograms a week, which he supplies to a local supermarket chain and estimates the plastic saves about 80% of his food crops.

“The Filipino farmers are fighters,” he said, predicting that he’ll remain in farming for many more years.

“Our families rely on farming for livelihood. We have to give it a shot.”