After years of growing increasingly reliant on cheap and abundant wheat supplies from Russia and Ukraine, the world’s grains buyers are being forced to hunt elsewhere as flows from both countries dry up.

Ukraine’s ports are closed, and while some grain is still leaving Russia for now, traders and shipping representatives said there were little or no new deals being signed because of the uncertainty around the conflict, potential new sanctions and surging costs for freight and insurance. Top importer Egypt held a wheat tender Monday but canceled it after only getting high-priced offers for French and American supplies.

It’s hard to overstate the role that Russia and Ukraine play in the global food trade. The two countries account for more than a quarter of global wheat trade, nearly a fifth of corn, and a whopping 12% of all calories traded globally, according to one estimate. Wheat futures breached a 13-year high this week.

“If the conflict is prolonged — three months, four months from now — I feel the consequences could be really serious,” said Andree Defois, president of consultant Strategie Grains. “Wheat will need to be rationed.” 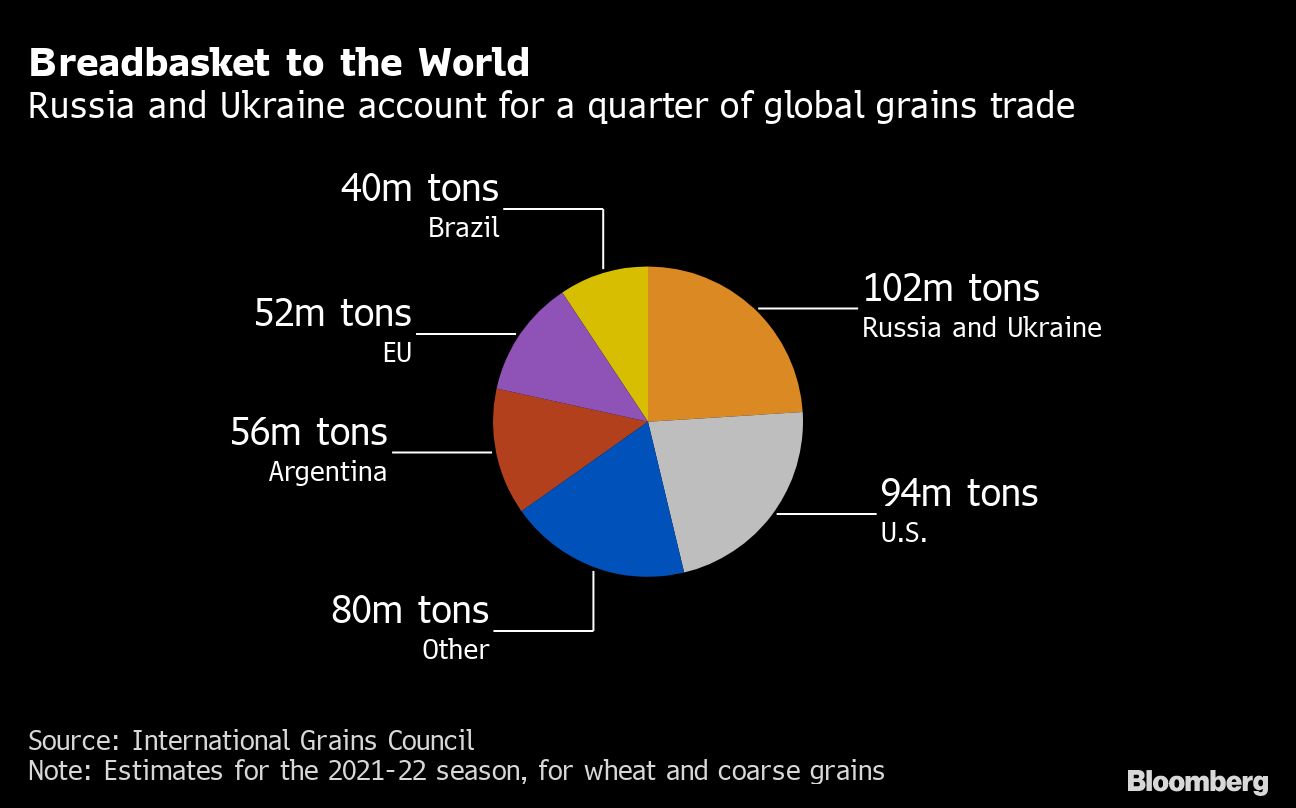 Both countries have seen harvests and exports surge in the last decade and farmers in the region typically produce at lower costs than more traditional suppliers like Canada and the U.S., which has helped to keep wheat prices lower. That’s made it a “breadbasket of the world,” supplying affordable grain to swathes of consumers, said Michael Magdovitz, a senior analyst at Rabobank.

Russia’s invasion of Ukraine and the shipping turmoil in the Black Sea have driven wild swings in crop prices as traders assess the potential impact on supplies and trade. Wheat futures in Chicago surged 23% in February, and corn and soybeans were both up about 10%. The gains continued Tuesday.

The disruptions come at a time when global crop prices had already soared because of poor weather and supply chain snarls, adding to inflation and hunger. If Russia and Ukraine were to leave the global grain market for an extended period, it could have a dramatic effect on food supplies and prices.

“Even with Russian ports open, a lot of operators are afraid of working with the Black Sea,” Defois said. “Exporters and importers will be very careful with Russia.”

To be sure, other suppliers can offset some of the blow, and buyers are already sizing up their alternatives. India, traditionally not a major wheat shipper, is expected to sell a record amount abroad. Origins like France, Germany and the U.S. could also pick up business, said Cezar Gheorghe, a grain-trade consultant at Romanian Agri Column.

But the threat to both infrastructure and spring plantings — set to start soon — from the conflict in Ukraine may mean the hit to production is far-reaching, even if exports are able to restart.

“In Ukraine, which has for many years fed the world, including its poorest countries, the very existence of the agricultural market is in jeopardy,” said Kyiv-based researcher UkrAgroConsult. “The chain of product creation, from cultivation to port shipments, is paralyzed.”

About two dozen crop cargoes were caught at Ukrainian ports in the midst of loading at least 630,000 tons of grain, according to Nabil Mseddi, chief executive officer of AgFlow. That includes wheat bound for Egypt, Algeria and Yemen, plus corn for China, South Korea and Spain.

“Buyers are holding their breath at the moment,” Gheorghe said. “But for how long can they do that?”