In late December, some 1,800 bulls left Spain for Turkey aboard a ship called the Elbeik. The trip was supposed to take around 11 days, then the cattle were to be sold, mostly to halal slaughterhouses, where they’d be killed with minimal suffering, as required by religious law.

At least it would have been swift. For the next three months, as the pandemic began to wreak havoc on global shipping, the vessel failed to unload its cargo, and the animals began to starve, according to an investigation by the Spanish government. Nearly 10% of the bulls died, their corpses thrown overboard or left to fester in the pens among the living. When the Elbeik returned to Spain, authorities ruled its remaining 1,600 animals were too sick to sell and had to be put down.

The Elbeik has become Exhibit A in the mounting case to ban the controversial, $18 billion cross-border trade in live animals. The pandemic has worsened conditions for the roughly 2 billion cows, sheep, goats, pigs and chickens that are exported each year, and epidemiologists have joined the calls for reform. Animals have been stuck in transit far longer than expected and safety inspections have been dramatically curtailed. With new sensitivity to risks that diseased animals can pose to humans, a growing number of countries are limiting or phasing out the practice altogether.

“When it comes to animal welfare, transport by sea is a big black hole,” said Thomas Waitz, an organic farmer from Austria who is a European parliamentary representative on a committee charged with updating the rules for the cross-border shipping of animals. “Ship transports completely fall outside of any regulations or animal-welfare standards. Public health is at risk if animals are transported in conditions where germs and bacteria can flourish.”

The EU, which accounts for more than 75% of the world’s live animal exports, is “incapable of guaranteeing animal welfare,” according to a report commissioned by the committee, which is expected to recommend a new, tighter set of regulations for exporters by the end of the year. The U.K. has gone further, planning to ban the transport of live animals for slaughter altogether, though it hasn’t set a date yet. New Zealand in April said it will phase out trade in live animals by 2023. 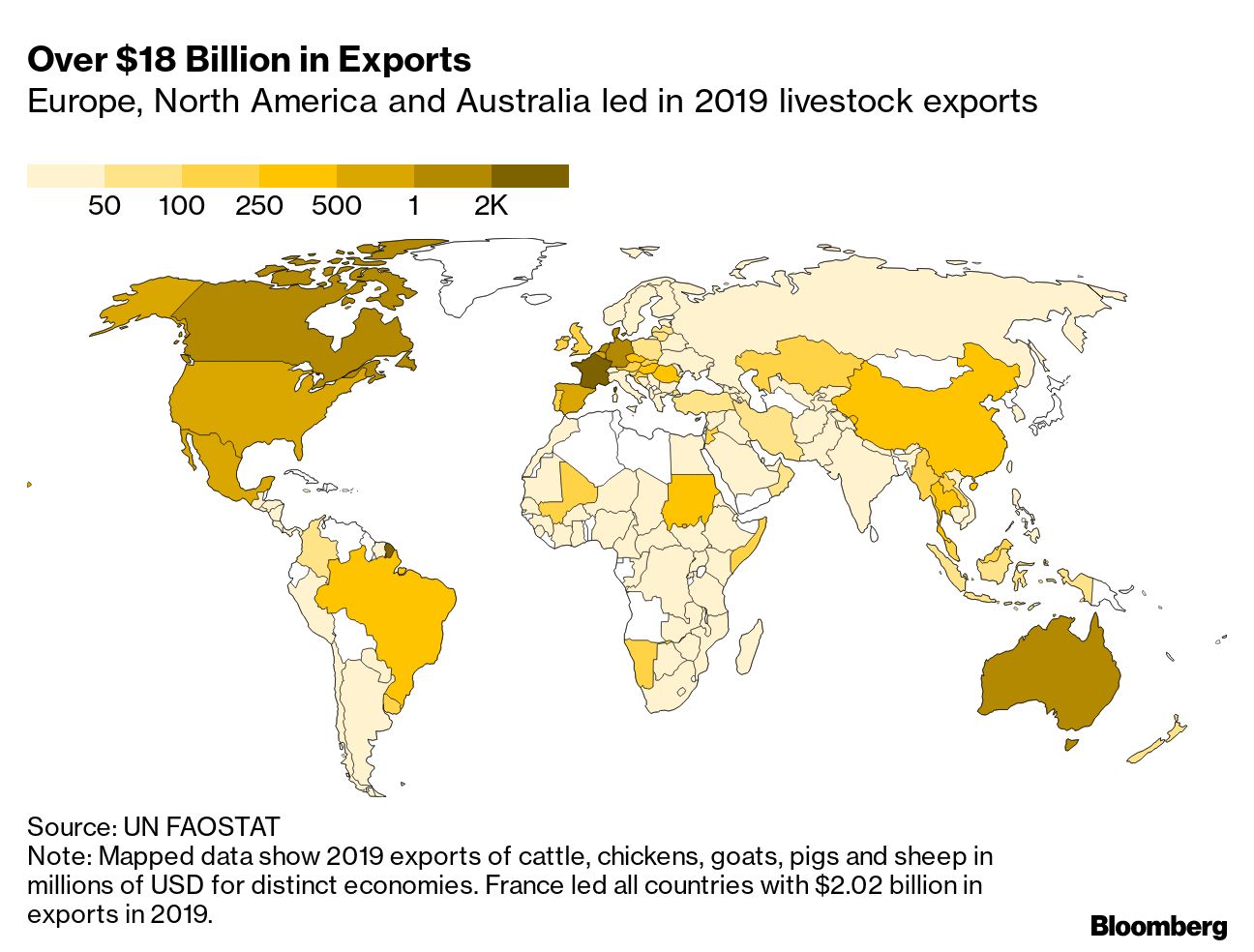 Some 39 million tons of meat were exported globally in 2019, most of it slaughtered, packaged and frozen or chilled beforehand — a process that’s more lucrative for meat producers and avoids the health and safety issues of transporting live animals. But as consumers in countries like China and Vietnam have grown wealthier, they’ve added more meat and dairy to their diets, amping up demand for breedstock and dairy animals. The robust market for halal meat among devout Muslims also means demand has spiked in recent years. Prices for live cattle from Australia are at record highs.

Even in normal times, live animals are considered cargo, and a ship full of sheep is more or less treated the same as one full of wool sweaters as far as most port authorities and shipping industry regulators are concerned. “We don’t look at the cargo or animal welfare,” said Maarten Vlag, secretary of the Paris maritime coalition that oversees ports from the U.K. to Russia. “We look if the ship is overloaded because that affects seaworthiness, but it makes no difference if it’s 10,000 containers or 10,000 animals.”

Meanwhile, thousands of livestock have been lost at sea. This spring, in addition to the cattle on the Elbeik, another 800 bulls on a ship to Turkey also had to be put down. Last year, nearly 6,000 cattle and more than 40 crew members died when their ship lost an engine and sank off the coast of Japan. In 2019, 14,000 sheep drowned in a shipping accident in a Romanian port, a livestock carrier caught fire while berthed in Greece, and another ran aground near Turkey.

The ordeal of the cattle on the Elbeik was so horrific that Spain’s agriculture ministry referred the case to prosecutors at the national court. The ship’s owner, Ibrahim Maritime Ltd., couldn’t be reached after several phone attempts and didn’t respond to text messages through a representative in Lebanon.

In the EU, veterinary inspectors at the ports check vessels to make sure they’re fit for animal transport. They also approve the loading of animals onto the ships. The report for the European Parliament’s transportation committee found that port inspectors and veterinarian authorities don’t share a communication platform. Veterinary authorities don’t seem to use the database for vessel deficiencies and “therefore approve very substandard vessels to carry live animals,” it found.

If the animals get sick, there may not be anyone to tend to them. Only Australia requires veterinarians on board if the voyage is expected to take longer than 10 days. The EU is considering a similar rule. Animal welfare advocates say there should be vets on all voyages. Even if the trip is supposed to be swift, delays happen — and the global pandemic has only made them worse.

Meanwhile, Australia has suspended its independent oversight of live animal shipping. In addition to the veterinary requirement, the government has since 2018 placed observers aboard on long journeys to ensure animals have adequate water, feed and ventilation. Out of concern for Covid risks and other logistical considerations, agriculture secretary Andrew Metcalfe told legislators that observers probably won’t be back for at least another year.

“This is an inherently risky trade with no transparency,” said Shatha Hamade, legal counsel for Animals Australia, which has also had to suspend its own in-person animal welfare investigations this year. “Now regulators are back to a system where they’re checking up on the industry from computer screens and paperwork.”

Still, Australia is the only country that requires animal exporters to have in place a traceable supply chain that tracks livestock from the moment when they get on the ships all the way to the overseas slaughterhouses to ensure they are handled and ultimately, killed, humanely.

That level of standard raises costs substantially for Australian exporters, said John Klepec, executive chairman of Wellard Ltd. The Australian publicly listed company got out of the animal export business two years ago because it had become unprofitable and is now exclusively chartering its purpose-built livestock carriers.

“It’s not a level playing field,” said Klepec. “We’re competing against ships from developing countries that don’t face the same standards. They can put as many animals on that can fit. We have to bear the brunt of the extra costs of regulation.”

During the pandemic, maritime inspections of livestock carriers have fallen more than 30%, according to a Bloomberg analysis of publicly available data. Many countries haven’t allowed inspectors to board ships because of Covid concerns, said Vlag of the European maritime agency. Even so, livestock carriers continue to face rates of detention far higher than vessels used for other industries. In Asian and European ports, some 9% of ships carrying animals in 2020 had deficiencies severe enough to delay their departure — more than double the rate for the next-biggest offenders. 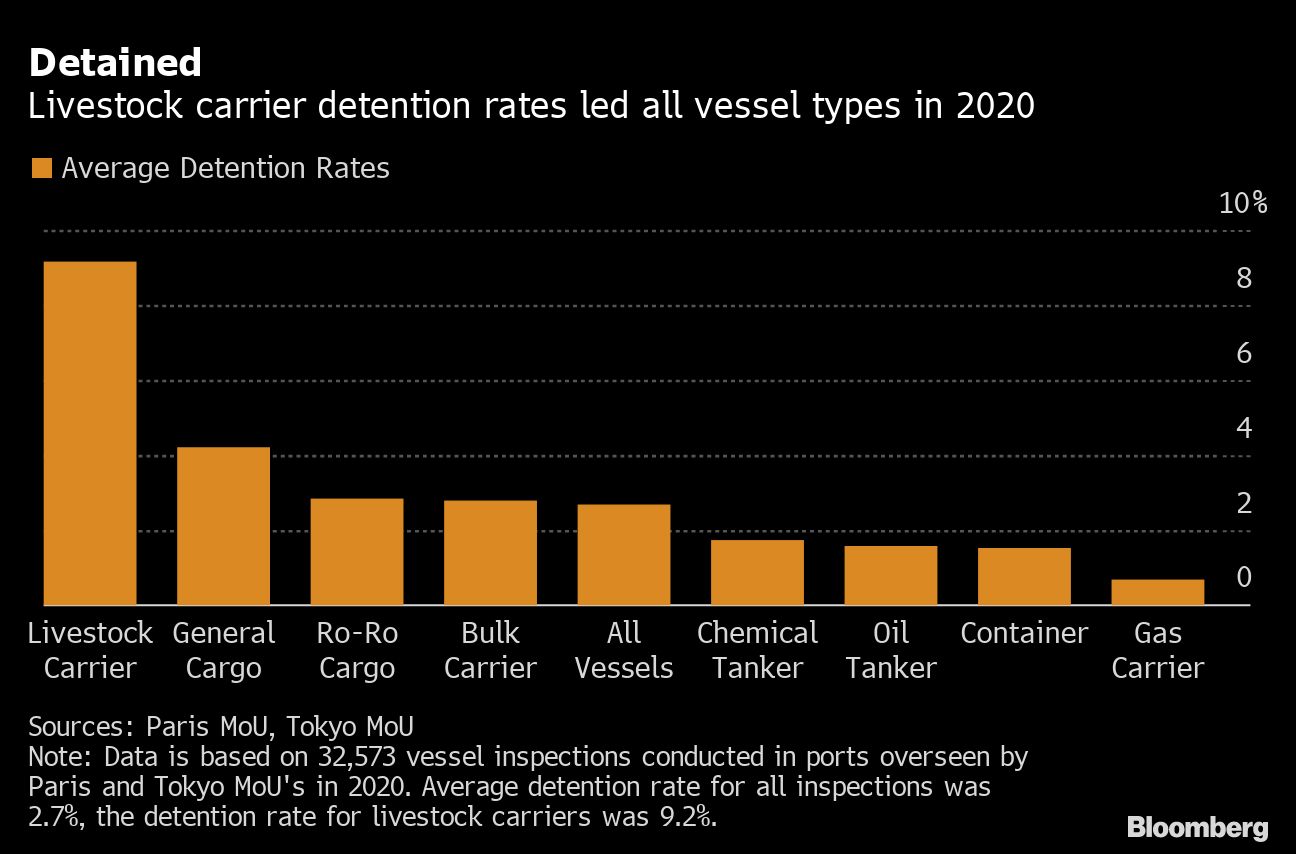 Because there’s very little public information about the health of the animals on board, experts look to the conditions of the boat as a partial proxy, said Sue Foster, a veterinarian and spokeswoman for Vets Against Live Exports. “If the mechanics on board a ship aren’t working properly, it can interfere with food and watery delivery or whether the ship is ventilated properly so the animals don’t get heat stressed.”

Most livestock vessels are old, converted to carry animals at the end of their run, said Vlag. That also puts the cargo at risk. “Fifty-year-old ships are hard to maintain, let alone find the spare parts that no one manufactures anymore.”

Of the 78 vessels approved by the EU for livestock transport, 53 have been detained three or more times for serious violations of the Paris MoU, according to a report released in June by the Animal Welfare Foundation.

The Elbeik, for example, is 54-years-old and was previously found lacking. In an inspection in January 2020, it was cited for cracked beams, floors and windows as well as other safety violations. Six months later, inspectors found eight new deficiencies, including problems with the engine, steering and weathertightness.

Before the mass euthanasia on the Elbeik, the official veterinary report found that iron pipes in the pens of the ship were broken or had rusted areas with sharp elements that may have scratched or hurt the cattle. The pipes that supplied drinking water to the animals leaked.

The report also concluded that the animals on board had suffered. It cited eye, skin and motor issues in the bulls, as well as weight loss leading in extreme cases to cachexia, a disorder that causes muscle wasting. “Some of these cachectic animals were in a state of stupor, unable to open their eyes or respond to stimuli,” the vet wrote. 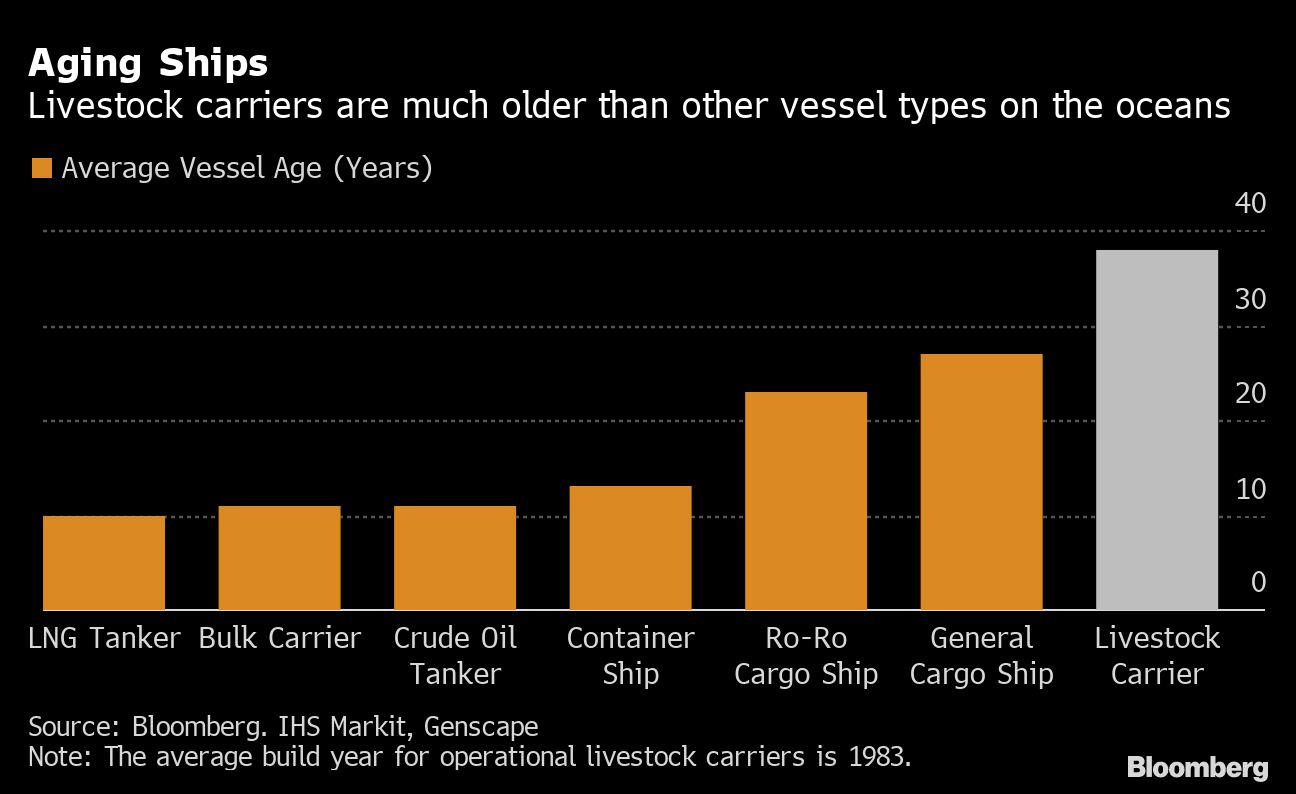 As it is, more than half of the livestock vessels operating in the EU “pose a threat to animal welfare, health and safety,” according to a 2020 report on live animal transport. And although there are veterinarians that approve ships to load animals, they’re primarily concerned with the health of the livestock. They may not even have access to ship inspection records.

The U.N. Food and Agriculture Organization has said live animal transport is “ideally suited for spreading disease.” Animals from different herds are confined in stressful environments, often with poor ventilation. Eventually, that’s bad for humans, too. While the origins of COVID-19 remain murky, it’s indisputable that animals have diseases that can transfer to people, and epidemiologists have been among the loudest critics of live animal export.

Still, industry trade groups including the Australian Livestock Exporters’ Council said current regulations are adequate and the threat to public health isn’t any greater than conditions found on farms. Australia exported more than 2.3 million livestock in 2019-20; after picking up the trade that New Zealand is set to ban, the nation’s industry will be worth an estimated $1.9 billion.

“No other country has the rigorous assurance system that we have in place for animal welfare,” said Mark Harvey-Sutton, chief executive officer of the Australian Livestock Exporters' Council, an advocacy group for exporters. “Our desire is that more governments meet the Australian standards. That's the best thing for the animals being transported.”

Australia also requires exporters to record daily mortality rates and notify agriculture authorities if animals die at a rate higher than 0.5% per voyage, or at least three animals. In 2020, Australia exported more than 1 million live cattle by sea and ships reported a total mortality rate of 0.11%, or about 1,224 animals, according to government data.

Mortality statistics are only the most extreme evidence of animal suffering, said Foster of Vets Against Live Exports. “Animals are huffing and puffing for days because of heat stress, they haven’t eaten or they’re covered in sores. That’s suffering and animal cruelty, but they’re not dead,” she said. “It’s difficult to know when boats are going, where they’re going to and what’s on board. It’s an industry that’s shrouded in secrecy and a lack of transparency.”

Waitz, the European parliament member, agrees. He recently was in Cartagena, Spain, where he observed cattle being beaten and kicked as they were being loaded onto a ship. On visits to other European ports, Waitz has been barred from the vessels entirely. “They’re probably afraid of what we might see,” he said.