COP climate talks were always going to be difficult: 200 countries in search of a plan to prevent catastrophic warming of the planet with time running out fast.

The backdrop of terrifying weather events had brought a renewed sense of urgency to the matter. Then, the energy crisis struck, leaving Asia and Europe scrambling for fossil fuels, forcing China to double down on coal, and giving climate laggards another excuse not to engage. In the U.S., President Joe Biden’s green ambitions have gotten bogged down in domestic politics, undermining his credibility as he tries to push others to curb their emissions.

The aim of COP — the acronym for the conference of parties that’s now in its 26th round — is to curb emissions, keep the goal of 1.5 degrees of global warming within reach, reduce coal use, sort out rules for a global carbon market and raise billions in climate finance.

But at the heart of talks is the issue of fairness. Developing nations say rich countries wrecked the planet as they industrialized, and it’s now unfair they’re thwarting others’ economic progress — and failing to provide enough cash to help poor countries adjust. That’s why there’s so much talk about how much money will be on the table.

Where It All Begins: Rome

COP will be held in Glasgow, Scotland. But the Group of 20 summit in Rome this weekend will set the tone as climate will dominate the agenda, with talks on coal use, net- zero goals and climate finance. So far, the G-20 — which includes major emitters China and India — has little to show for many summit hours. Meetings this month even showed signs of backsliding. If leaders can make progress, it will be a major boost for COP. They wrap up in Rome on Oct. 31, and head straight for Glasgow.

Some key leaders are going to be missing, including China’s Xi Jinping, Russian President Vladimir Putin and Brazilian President Jair Bolsonaro. Still, almost 200 countries will be represented. Some delegates will be there in person, some will dial in from home, and there will be strict rules on masks, numbers allowed in negotiating rooms, and Covid testing. The pandemic has added extra obstacles, and some countries go into the talks resentful of what they perceive as unequal access.

Under the landmark Paris Agreement of 2015, countries have to regularly review their pollution-reduction pledges in order to ensure the world stays on track to limit the rise in temperature to close to 1.5 degree Celsius. The first promises — called Nationally Determined Contributions, or NDCs — were submitted in 2016, but it was clear that they were well short of what science says is needed.

While some nations have already submitted new pledges over the past year, several major economies, including China and India, haven’t. The plans made so far would lead to a 2.4-degrees increase in temperature by the end of the century, according to the nonprofit research group Climate Action Tracker. At the start of COP there’s a moment of taking stock — to see just how far away we still are from keeping 1.5 degrees within reach. U.S. climate envoy John Kerry has already acknowledged the plans probably won’t be enough, and one aim of Glasgow is to make sure countries keep coming back with improved goals. 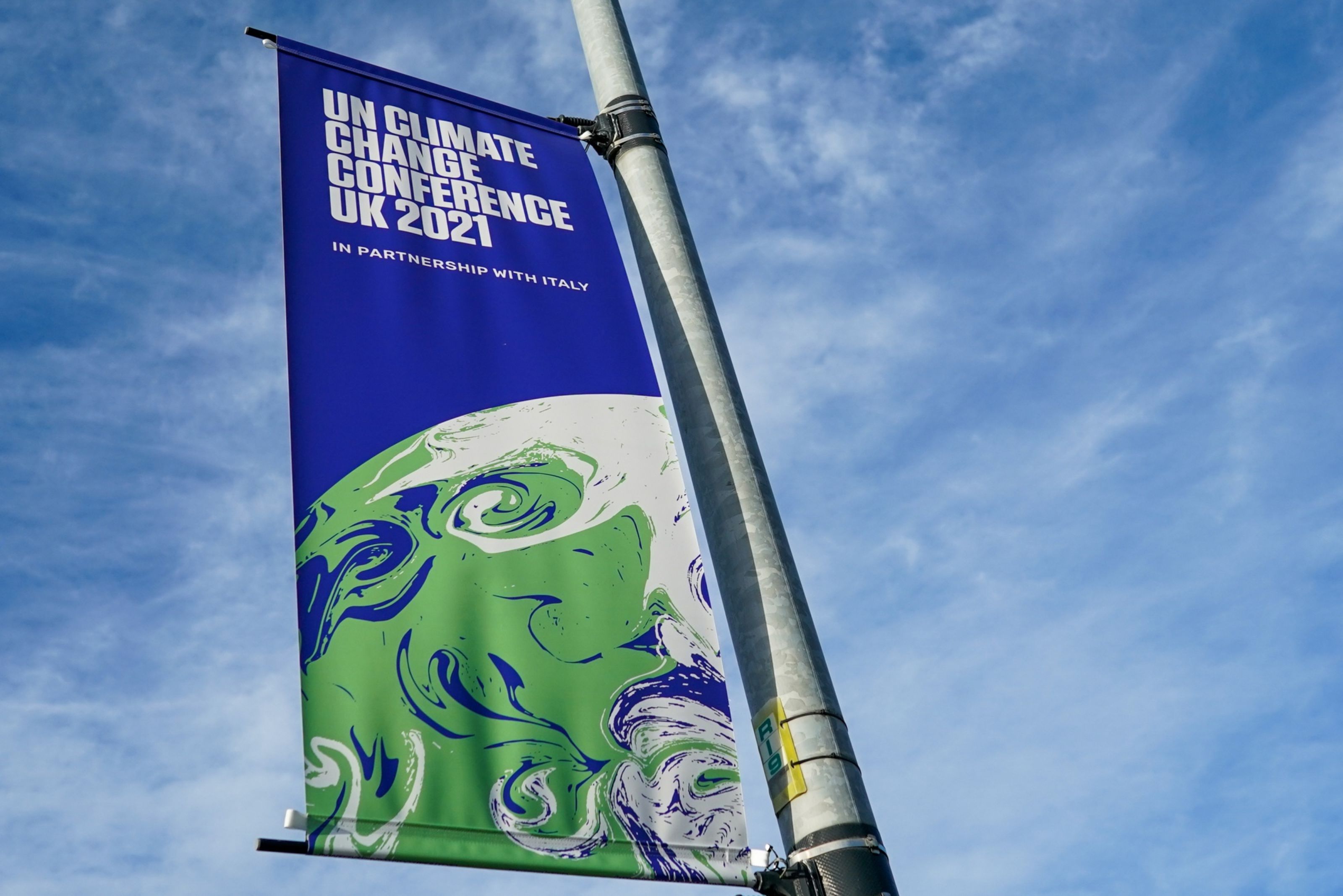 The U.K. hosts describe the aims for this COP as “coal, cars, cash and trees.” That means ending the use of the most polluting fossil fuel; phasing out the internal combustion engine; raising cash to help developing countries transition to cleaner energy and protect against the ravages of climate change; and reversing deforestation. They also aim to figure out global rules for pricing and trading carbon globally. Expect posturing and grand statements in the first two days — along with perhaps some new pledges — then the leaders leave, and the real work starts.

The U.K. presidency has set a target for the meeting to consign coal to history — and has been pushing for the goal at G-7 and G-20 meetings this year — with mixed success so far. But coal is still a massive part of the energy mix, and the recent surge in energy prices has forced countries into even greater reliance on the fuel. China is ordering miners to dig up as much as they can and in the U.S. a key lawmaker from coal-rich West Virginia is getting in the way of Biden’s plans.

More than a decade ago, developed nations pledged that by 2020 they will raise $100 billion per year to help developing nations transition to cleaner energy. But they still haven’t delivered on the promise, a failure that enrages poor countries and undermines developed world leaders’ credibility as they push others to make expensive changes. Total climate finance was $79.6 billion in 2019, an increase of just 2% from 2018, according to the OECD.

“We absolutely need to meet the $100 billion,” says Tina Stege, climate envoy for the Marshall Islands. “The delivery of that is a foundational element of the success at COP. ”

Last month, Biden doubled the latest U.S. pledge to $11.4 billion annually beginning in 2024, but that still has to be approved by Congress, and activists argue it doesn’t come close to the U.S.’s fair share for the fund. ODI, a think tank, puts that figure closer to $43 billion, based on the U.S.’s wealth, emissions and population size.

Finance ministers, central banks and Wall Street bank CEOs will be in Glasgow on Nov. 3 for finance day, with a focus on how to green the global financial system and funnel money away from polluting industries and into cleaner ones. Watch out for pledges to phase out, or stop, financing for coal. Already we’ve seen a series of promises in the runup, including JP Morgan Chase & Co joining an alliance of lenders aligning their portfolios with net zero by 2050. As always, though, what matters is the detail, and just how rigorously investors hold companies to account.

The Paris Agreement left some unfinished business that negotiators still haven’t been able to tie up: how to standardize rules on carbon trading across the world. The buzzword to watch is Article Six — referring to those lines in the Paris deal that paved the way for a global carbon market but are so complex and controversial that they are yet to be finalized. The good news is negotiators are edging toward a deal on this.

The basic idea is to match carbon-sucking projects that reduce pollution with counterparties who need to reduce emissions, via a market of so-called offsets, which could be worth as much as $100 billion in 2030, according to some estimates. The mechanism in theory should drive money to places where the biggest gains can be made most cheaply.

“Offsets are becoming an increasingly important element of decarbonization strategies,” says Lidia Wojtal, of think tank Agora Energiewende.“While there are already various voluntary carbon markets that can provide such credits, a deal on Article Six would make a difference: it would guarantee a truly global standard.”

The difficulty is in creating a robust financial instrument that would translate work on national emissions-reduction pledges into comparable, exchangeable units. The framework needs to be flexible enough to attract investment, palatable to a range of countries with different priorities, and credible. Some negotiators say a bad deal would be worse than no deal if the rules that emerge aren’t robust enough. There are two big sticking points: one is the need to avoid double counting, the other is how to deal with old credits from a now-defunct system launched way back in 1997 under the Kyoto Protocol. A good deal would result in a net reduction of emissions globally — and the risk is that a bad deal does the opposite.

Broadly speaking, developing nations are eager to reap the funds that would come from a new program, while richer nations led by the European Union are focused on the integrity of the system.

At the end of talks there’s likely to be some kind of Glasgow declaration. The U.S. and U.K. have both said they want to make sure countries keep ratcheting up their plans. While several leaders are framing COP as a "make or break" deal for the planet, the reality is probably more nuanced. A clear win on just one issue will probably count as success, and it’s possible there will be progress that can be built on down the line. Meanwhile the role of business and finance is increasingly important — banks are mobilizing finance to green the economy, and that momentum is likely to be sustained.

Saving Face: The Side Deals

But as the main goals of ending coal and getting a net-zero commitment slip out of reach, work is under way to hatch a series of side deals that would go some way to salvaging the talks — or at least saving face. There’s a plan on curbing methane, for example, which the U.S. and EU are cajoling others to join, and others in the works on aviation and forests. The risk though is that if the main communique is so weak that all the action is in the mini deals, it raises questions about what’s the point of COP — and whether climate multilateralism is coming to the end of the road.