President Joe Biden said his administration’s work has begun to alleviate supply chain disruptions and that higher inflation is a “natural byproduct” of the global economy’s recovery from the pandemic.

The president, who’s been assailed by his political opponents over rising prices, again sought to reassure Americans that store shelves will be full for the holiday season and persuade them that his policies would build on the economy’s strong rebound.

“I can’t promise every person will get every gift they want on time. Only Santa Claus can keep that promise,” he said in a speech from the White House. But he noted that executives of large retailers have “reported that their shelves are well stocked and they are ready to meet consumer demand for the holidays.”

The president boasted of his administration’s efforts to relieve crowding at U.S. ports, where unprecedented consumer demand has led to long queues for ships and piles of containers full of goods. By prodding unions and port managers to “step up and cooperate more,” the ports have expanded operations and sped up the movement of goods, he said. 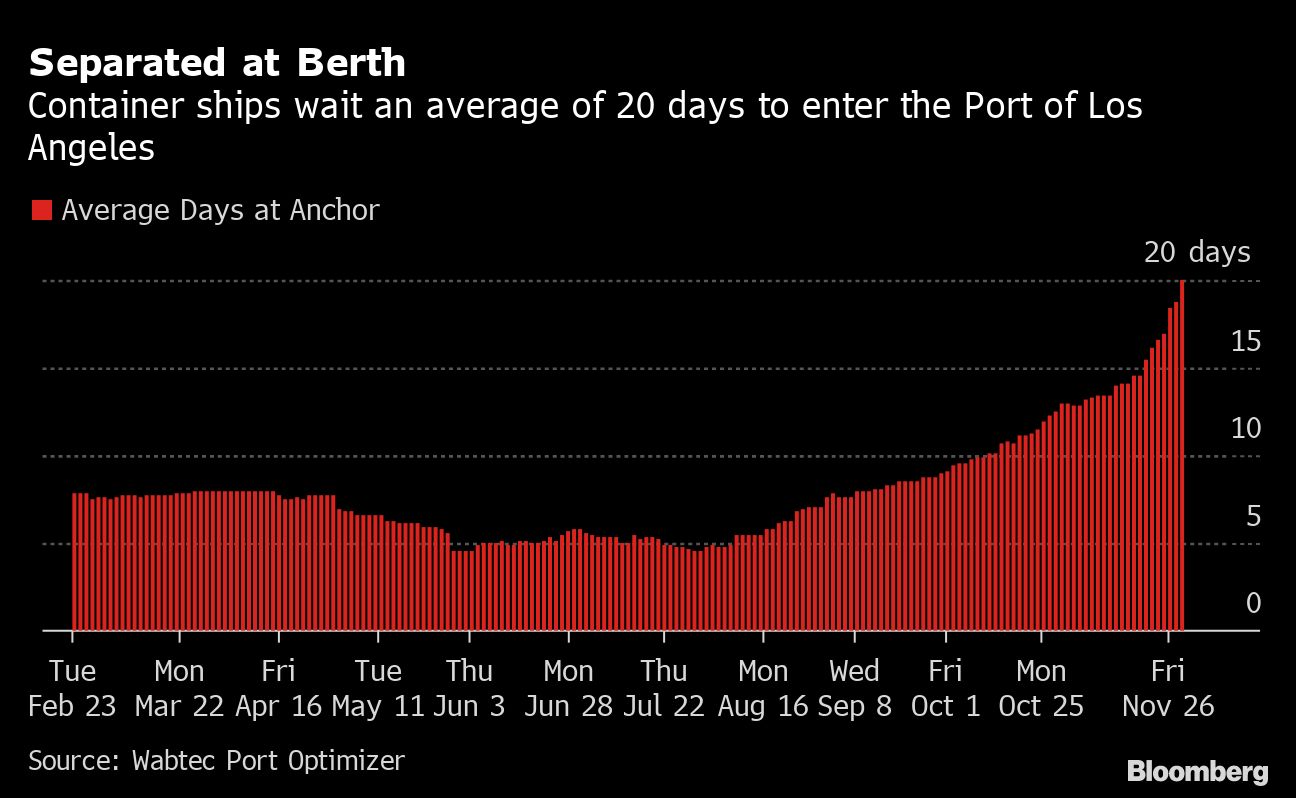 And he pointed to reports this week of accelerating prices in Europe and the U.K., in defense of his administration’s own efforts.

“This is a worldwide challenge, a natural byproduct of a world economy shut down by the pandemic as it comes back to life,” he said. “Even accounting for rising prices, the typical American family has more money in their pocket than they did last year, or the year before that.”

The U.S. consumer price index, a broad survey of inflation, increased 6.2% last month from October 2020, the fastest annual pace since 1990. Companies increasingly have passed along increased shipping and transportation costs to consumers, contributing to increasing prices.

While many economists believe the abnormal inflation is due to unprecedented consumer demand following the pandemic shutdowns, Republicans have blamed Biden and his economic policies.

Biden took a swipe at his political opponents, some of whom he said are “rooting” for inflation in the belief it’ll benefit their party in next year’s elections. Florida Senator Rick Scott, a Republican, told the Wall Street Journal that inflation is a “gold mine” for his party.

“I don’t want to speculate on anyone’s motive but it’s always easier to complain about a problem than to try to fix it,” Biden said.

He said his $1.75 trillion “Build Back Better” legislation, which is stalled in Congress, would help families contend with inflation by reducing the costs of child and elderly care, “housing, college, health care and prescription drugs.”

“These are the biggest costs that most families face,” he said.

Widespread public anxiety about the economy has forced Biden to repeatedly address the issue in speeches, trips and other events in recent weeks. He’s also sought to cast policies driven by the progressive wing of his party, including federal support for child care, expanded preschool and health insurance premiums, as inflation-fighting.

Despite efforts to ease congestion, long delays continue at the ports of Los Angeles and Long Beach, which combine to handle 40% of the U.S.’s inbound containers. Forty-nine container vessels were anchored off their coasts as of Tuesday, seemingly an improvement from the more than 80 waiting a few weeks ago.

However, much of the decrease stems from a new queuing system for ships that keeps them farther away from the coast and slows their progression across the Pacific Ocean, said James Kipling Louttit of the Marine Exchange of Southern California, a nonprofit involved in maritime traffic.

“All it does is move the parking lot,” he said.

Companies operating at the two California ports — which together are the nation’s busiest — have agreed to eliminate fees for shipping containers picked up at night and on weekends, instead of during peak hours. And one of the world’s biggest ocean carriers is offering as much as $200 per container in incentives for importers to help clear the ports’ backlog by retrieving their goods faster.

The ports have said they’re considering charging fines for containers that sit on the docks for too long, and that the threat of penalties has helped ease bottlenecks. 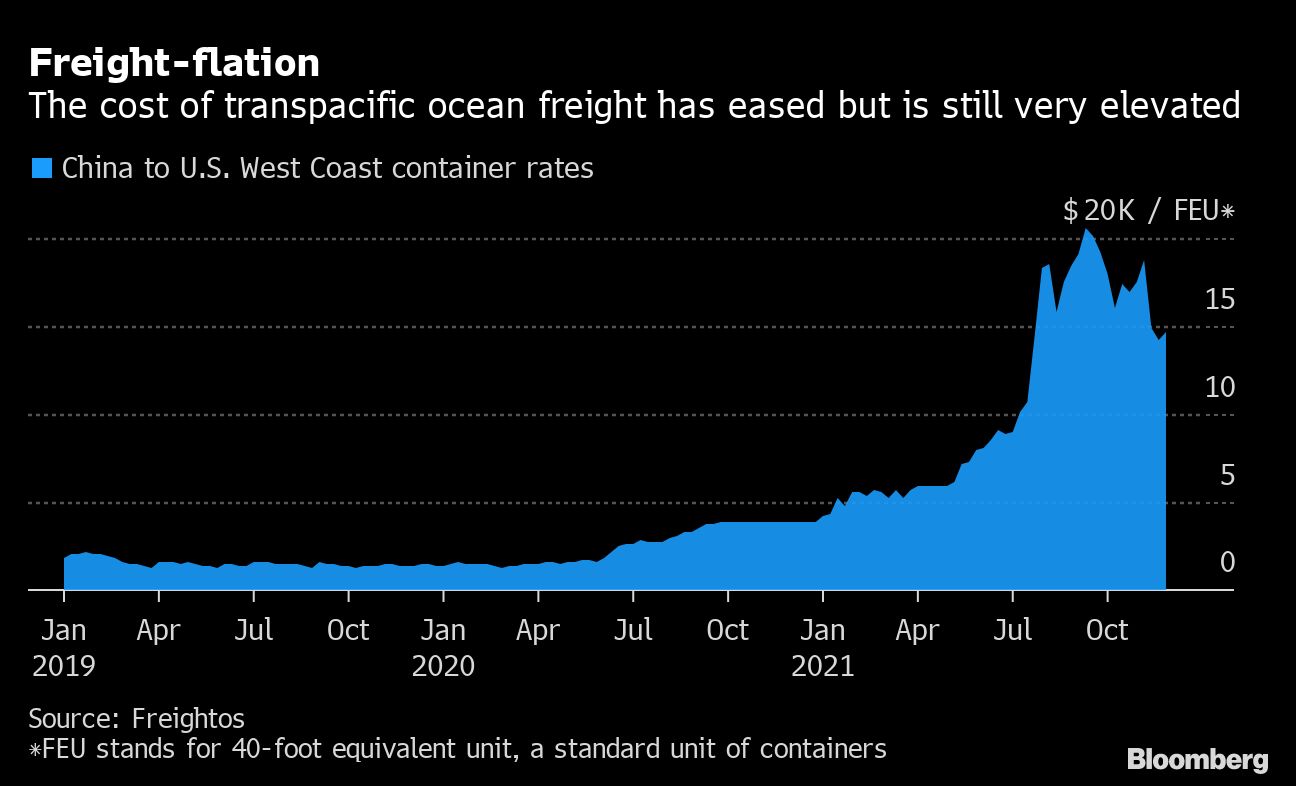 “Gas supply companies are paying less and making a lot more. And they do not seem to be passing that on to the consumers at the pump,” he said during remarks on Nov. 23. “Instead, companies are pocketing the difference as profit.”

The White House applied a similar tone in a blog post Monday.

“And with prices for shipping dropping 20% in November, retailers will hopefully be able to begin passing on those savings to consumers soon,” it said.

Polls indicate a majority of voters believe the country is headed in the wrong direction, despite reduced unemployment and growing economic output under Biden.

Many of the supply chain issues facing the U.S. are largely out of Biden’s control and the White House has acknowledged there isn’t a quick fix.

That includes a global shortage of semiconductors, which continues to cause supply disruptions for cars and electronics.

The White House supports legislation to encourage domestic research and manufacturing of chips but the measure has been stuck in Congress for months. And even after it passes, the impact would not be felt for years, making it a long-term solution that doesn’t help alleviate the immediate supply crunch.