Ocean shipping rates are expected to stay elevated well into 2022, setting up another year of booming profits for global cargo carriers — and leaving smaller companies and their customers from Spain to Sri Lanka paying more for just about everything.

The spot rate for a 40-foot container to the U.S. from Asia topped $20,000 last year, including surcharges and premiums, up from less than $2,000 a few years ago, and was recently hovering near $14,000. What’s more, tight container capacity and port congestion mean that longer-term rates set in contracts between carriers and shippers are running an estimated 200% higher than a year ago, signaling elevated prices for the foreseeable future.

Large customers of sea-borne cargo like Walmart Inc. or Ikea have the heft to negotiate better terms in those deals, or absorb the added expense. Smaller importers and exporters — especially those in poor countries — that rely on carriers to haul everything from electronics and apparel to grains and chemicals, can’t easily pass those costs along or weather long periods of stretched cash flows. The situation is throwing a spotlight on the market concentration of shipping lines, and their legal immunity from antitrust laws.

“Small- and medium-sized enterprises are being badly affected,” said Amruth Raj, managing director of Green Gardens, a vegetable processor based in rural India. After container rates shot up in the past year, more than 50% of his company’s capital was wiped out when European buyers balked at the higher costs. “They exploit our desperation.”

In the developing world, it’s not just business survival that’s at stake. Achil Yamen of the Cameroon National Shippers’ Council, raised concerns about inequities in Africa on a recent conference call hosted by the United Nations trade body.

“If nothing is done to reverse the trend, the risk in terms of inflation and food security can grow very, very high,” Yamen said.

Meanwhile, the backbone of the postwar march toward globalization is coming through the pandemic in the strongest position in its history — a stark reversal of years losing money in the capital-intensive business. Ocean-freight carriers pulled in estimated profits of $150 billion in 2021 — a nine-fold annual jump after a decade of difficulty eking out any gains. 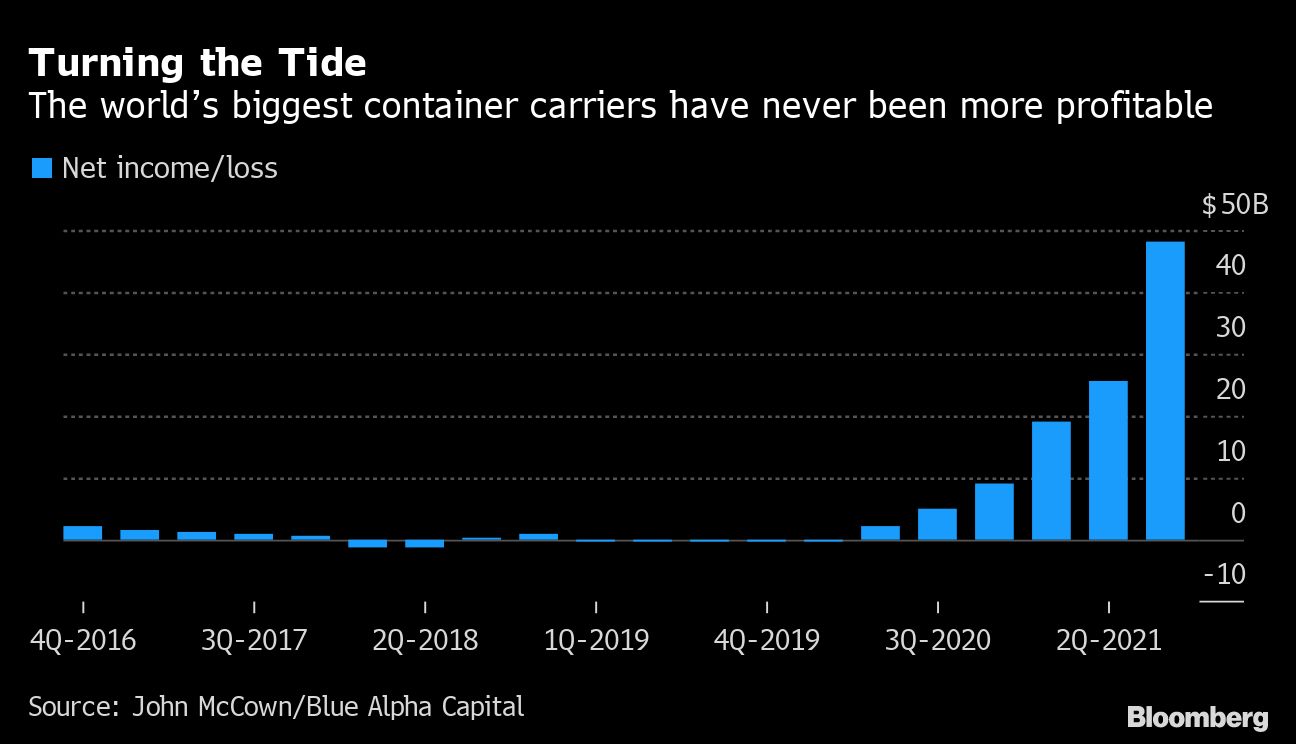 Denmark’s A.P. Moller-Maersk A/S, the world’s second-largest container carrier, was on track for an annual profit last year that would match or surpass its combined results from the past nine years. Its shares hit a record high this month, as did stock in Hamburg, Germany-based Hapag-Lloyd AG, the No. 5 player. The largest, Mediterranean Shipping Co., is a closely held company based in Switzerland that is controlled by Italy’s powerful Aponte family.

Surging Shipping Costs and the Dangers of Inflation

The extended windfall has touched a raw nerve across the political spectrum as economists warn that persistently high transportation prices are stoking inflation and clouding the recovery. High costs for freight that used to fan only temporary spells of inflation upticks are becoming longer-term features of economies in the U.S. and elsewhere.

Nicholas Sly, an economist with the Kansas City Fed, has done research that found, in the past, a 15% increase in shipping costs led to a 0.10 percentage point increase in core inflation after one year. Shipping rates, he said, currently are a persistent — rather than temporary or transitory — challenge.

“Those types of shocks tend to have lasting effects 12 to 18 months out,” Sly said.

Faced with forces that are upending traditional business models, shippers around the world are pleading with regulators to rein in ocean-freight carriers. The latest salvo came Jan. 5 from the British International Freight Association, which called on the U.K. government to investigate “distorted market conditions” within the global container-shipping market.

The British freight lobby has pointed to concentration in recent years. Just 10 container lines based in Asia and Europe, led by Maersk, MSC, France’s CMA CGM SA, and China’s Cosco Shipping Holdings Co., control nearly 85% of the capacity for shipping goods by sea. Twenty-five years ago, the top 20 companies controlled about half of the global capacity.

While officially competitors, nine of them operate under vessel-sharing agreements called “alliances” that coordinate schedules and share space on ships. Meanwhile, carriers have long enjoyed leeway from anti-competition laws in most major economies, including in the European Union and in the U.S.

The Pandemic’s Impact on the Shipping Industry

For the first time, the pandemic demonstrated just how adept the carriers have become at managing the market's supply of cargo capacity, by curtailing it when COVID-19 first shook the world's economy and then ramping it up when demand rebounded strongly, driving prices higher than ever. Shippers have chafed at how the alliances’ lock on capacity — the ships, their schedules and speeds, and the millions of steel boxes in circulation — has translated into asymmetric pricing power. 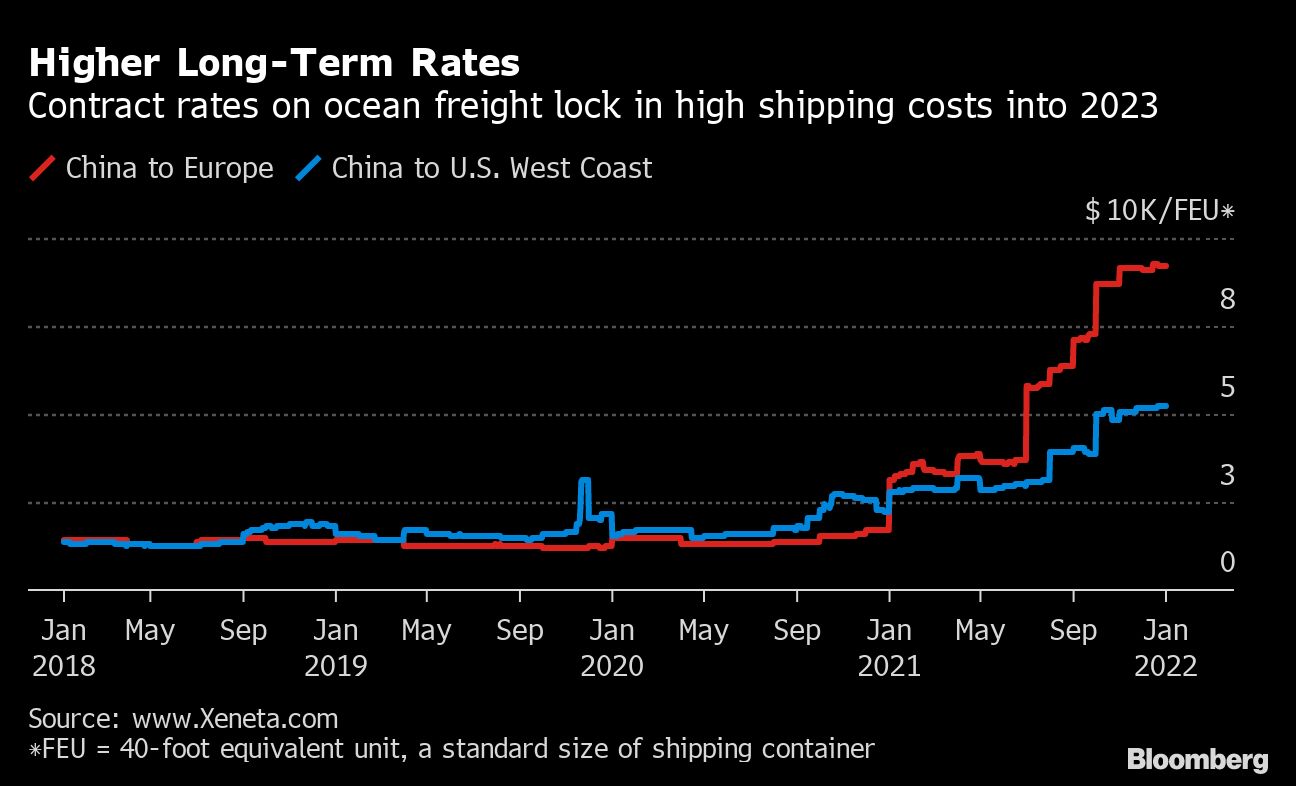 Over the summer, a Pennsylvania-based home decor importer, MCS Industries Inc., filed a complaint against carriers MSC and Cosco before the Federal Maritime Commission, the agency tasked with overseeing carriers in the U.S. The company complained that they “have been operating in tandem to exploit the COVID-19 disruption to profiteer at the expense of U.S. consumers.” MCS reached a confidential settlement with Cosco, while proceedings against MSC are ongoing.

“This market is not working to the benefit of everybody,” said James Hookham, director of the Global Shippers Forum, which represents importers, exporters and cargo owners. “We believe this market needs some investigation to make sure those customers are not being abused.”

Carriers insist the high prices are an anomalous spike born of pandemic-sparked imbalances in supply and demand that will naturally resolve. John Butler, chief executive officer of the World Shipping Council, a group representing the container lines, defended the alliances as arrangements that make the whole system work more efficiently. The council points to stronger-than-normal consumer demand in the U.S., and Butler blames many of today’s disruptions on problems with land transportation.

“Pre-pandemic, the situation that we’ve had for the better part of 20 years is plenty of capacity, really low rates and plenty of service,” Butler said. “There’s nothing in the industry as a structural matter that has changed since then.”

Mario Cordero, former chairman of the FMC and executive director at the Port of Long Beach, which is part of the U.S.’s largest port complex, said it's a “confluence of factors” that have led to the tangling of the global supply chain in the wake of the pandemic. While he expects port congestion and shipping prices to move closer to normalcy in the second half of 2022, he’s still cautious. “I’m not suggesting we're over this.”

Modern American shipping laws date to 1916, an era when bulk goods were loaded on ships by net and crane. At the time, the U.S. government was concerned that foreign carriers and pricing monopolies threatened to disadvantage American businesses and undermine a nascent domestic commercial fleet. In response, Congress exempted carriers from antitrust laws, but required them to report any pricing agreements to regulators.

While shipping laws have been reformed over the years, the last major update was in 1998, a time before China was admitted to the World Trade Organization. The statutory antitrust exemption for the industry has endured, even as the FMC has lost some of its watchdog authority.

For decades, the U.S. Department of Justice has been pushing Congress to get rid of the antitrust immunity, arguing that it was no longer justified and undermined a free-market economy. At the same time, the shipping industry was undergoing a wave of consolidation that saw American carriers snapped up by foreign entities.

As carriers commissioned larger ships to obtain cost advantages, they struggled to fill the massive boats to capacity, losing money. Some stayed afloat with government-backed financing or outright state control like China’s ownership of Cosco. In 2013 carriers began forming alliances to collectively allocate cargo space and organize sailing schedules, much like airlines use them to book passengers on each other's flights, allowing travel on multiple carriers with one itinerary. By 2018, the UN agency that monitors maritime trade described it as “a market structure that is more representative of a loose oligopoly.”

When the first lockdowns hit in March 2020, most observers expected the shipping industry would be decimated. But an unexpectedly sharp rebound in demand followed the initial worries of a lasting plunge. The Chinese and American economies began reopening and government stimulus payments began flowing, juicing consumer demand for goods such as exercise bikes and home-office desks. By the third quarter of 2021, world trade in goods hit a record $5.6 trillion and was on pace for an equally solid number in the final three months of the year.

The roaring demand severely disrupted supply chains. Major ports in the U.S. couldn’t process imports fast enough, trucking companies fell short on drivers, and warehouses ran out of space. Fully loaded ships idled off California beaches for weeks because of port congestion. Suddenly, an industry that had plied the seas largely unnoticed by the general public had become a highly conspicuous target.

Regulators from the U.S., the EU and China met in September and determined there was so far no evidence of anti-competitive behavior in container shipping. Still, governments are on high alert as global supply chains are being pushed to the breaking point.

In November, the White House took aim at the industry’s consolidation, saying “this lack of competition leaves American businesses at the mercy of just three alliances” and calling on the FMC to “use all of the tools at its disposal to ensure free and fair competition.”

The FMC says it has increased monitoring of carrier alliances, to better track trends and spot potential illegal behavior, such as artificially limiting supply or not competing on prices. In late December, the agency opened an investigation into the Taiwanese carrier Wan Hai Lines Ltd. alleging relatively narrow violations of fee rules governing container returns. Beyond such steps, even the agency’s chairman, Daniel Maffei, said that under current U.S. law there is little regulators can do to rein in more widespread potential abuse.

“The fact is that it is very, very difficult, if not impossible for the FMC to ever challenge these alliances for violating competition requirements,” said Maffei, noting that he has no evidence that they currently are. “We don't really have the practical tools necessary to challenge it.”

In the U.S., a bipartisan bill that passed in the House last year takes aim at reforming U.S. shipping laws. It would give the FMC greater authority, prohibit carriers from discriminating against American cargo, and give businesses more power to challenge carrier fees. But even that bill — a potentially once-in-a-generation shot at reform — stops short of targeting carriers’ antitrust immunity. In Europe, the shipping companies’ exemption from anti-competitive rules is set to be reviewed again in 2024. The European Commission is “closely monitoring the container shipping industry and is aware that there have been large price increases,” the commission said in a statement.

Regardless of who’s to blame, customers are anguishing over the situation. Smaller importers and exporters have seen their cargo getting “rolled” — bumped like passengers from an oversold flight — and sometimes canceled outright despite contractual obligations with carriers.

Lori Fellmer, vice president of logistics and carrier management at New Jersey-based raw chemicals importer BassTech International, says she’s had shipments rejected multiple times, with seemingly no recourse. “In some cases, there was no getting space on a ship,” she said.

“Yes, they have to make money, don’t get me wrong — but when you have a 10 times, 12 times, 16 times higher freight rates — there’s something radically wrong,” he said.