Home » When Will the Chip Shortage End? U.S., EU Spend Billions in Race to Beat China

When Will the Chip Shortage End? U.S., EU Spend Billions in Race to Beat China

Magdeburg in former East Germany is famous for its towering gothic cathedral, and not a lot else. It’s now about to play a key role in U.S. and European efforts to tilt the global balance of power.

Intel Corp. unveiled plans on March 15 to build a giant, 17 billion-euro ($18.7 billion) factory making cutting-edge semiconductors in the city, adding to new plants in Arizona and Ohio the company announced over the past six months.

They are part of Chief Executive Officer Pat Gelsinger’s plan to wrest control of production from Asia and tackle the global shortage of chips exacerbated during the COVID-19 pandemic and exposed again following Russia’s invasion of Ukraine. “The situation reinforces why we’re doing this project, and the need for globally resilient and balanced supply chain,” Gelsinger said after revealing the Magdeburg site.

His ambition is one that the U.S. and European Union are promising to back with a combined $100 billion in a subsidy race to reduce reliance on imports just as China plans to turn itself into a chip powerhouse. Behind closed doors, though, some people in the industry are getting increasingly concerned that the push to make the West more competitive might backfire.

Their worry is not only that the money will be too little, too late, but the political strings attached to the aid may complicate global supply chains further. Different parts of the planet will compete to secure supplies while championing domestic plants that can’t yet fill the void.

The dearth of semiconductors has brought some car manufacturing to a halt and delayed shipments of game consoles and smartphones, waking Washington and Brussels up to the fact that their continents are dependent on a handful of regions for the key parts. The most notable is Taiwan, a geopolitical hotspot because of historically tense relations with China and one whose vulnerability is under more scrutiny since Russia’s invasion of its smaller neighbor.

Yet, however dysfunctional it may look at the moment, the supply chain is global and fully integrated. Unpicking it could carry greater risks, said Rudi De Winter, CEO of German chip maker X-Fab Silicon Foundries.

Russia, which has been sanctioned by the U.S. and Europe, now is a clear example of how semiconductors have become increasingly important political tools. The items were some of the first goods that Washington and Brussels targeted to cut Russia off from the global economy, and they’ve continually threatened more action. Manufacturing of cars in Russia, for example, has already been hit.

On the flip side, Russia and Ukraine export palladium and neon used to make semiconductors, though chipmakers have downplayed the potential impact.

U.S. Secretary of Commerce Gina Raimondo said in an interview on March 9 that if Chinese companies defy U.S. restrictions against exporting to Russia, Washington could shut down companies by cutting them off from the American equipment and software they need.

Semiconductors and other high-tech are becoming “weaponized” with the current trade wars and supply chain issues, said Rafael Laguna de la Vera, CEO of SPRIN-D, Germany’s federal agency for disruptive innovation. “This is why regions need to invest into high tech to get resilient,” he said. 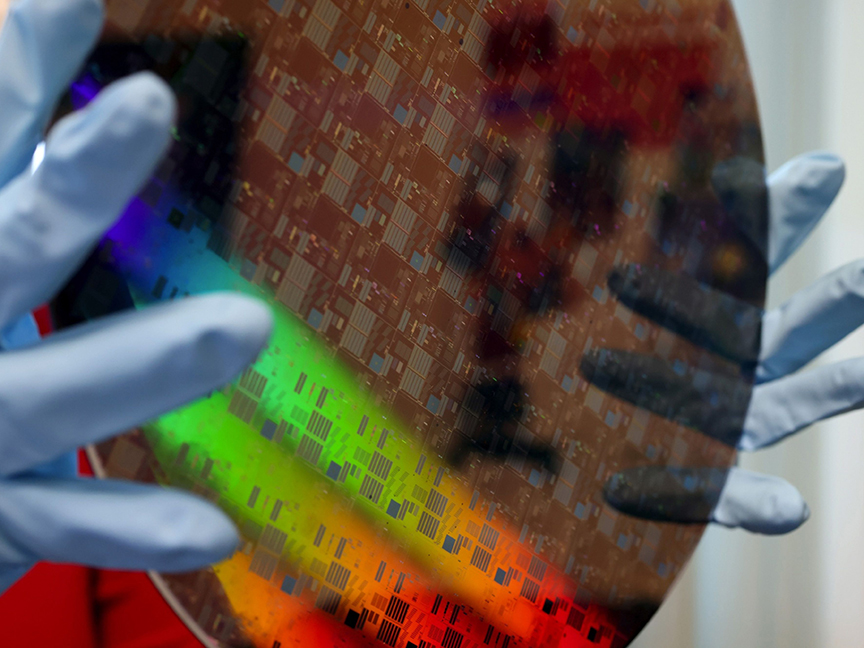 The U.S. and Europe want to claw back their share of the chip market after collapses in recent decades. The U.S. accounted for nearly 40% of the world’s silicon wafer production in the 1990s, while the EU accounted for more than 20%, according to figures cited by Washington and Brussels. The U.S. is now below 15% and the EU has about 10%.

How Biden Plans To Tackle the Shortage

In an effort to shift production away from Asia, President Joe Biden plans to put $52 billion into domestic semiconductor research, development and production as part of its broad China competition bill, though it is still awaiting approval. The EU’s 27 member states, meanwhile, are only just scrutinizing the European Commission’s recent proposal worth $48 billion to build up the bloc’s chip capacity.

China has already been spending what could amount to $150 billion by 2030 to jumpstart production. The country is still far behind, especially when it comes to advanced chip making, but it’s catching up quickly. 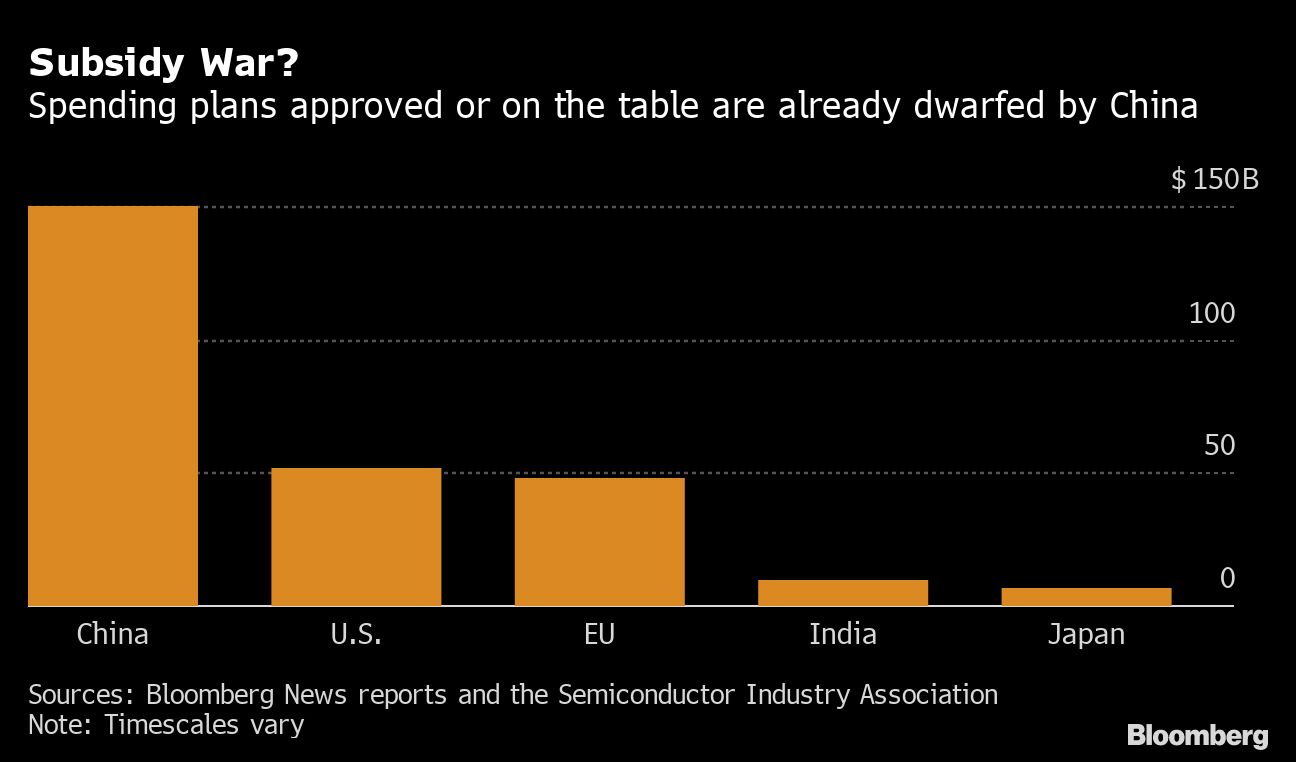 Some members of Congress, though, want to see the taxpayer funds attached to guardrails that prevent companies from using the money to invest in China while Intel at one point lobbied against the taxpayer funds going to firms headquartered abroad.

In the past, things were simple for chip producers, said Kurt Sievers, CEO of Dutch chipmaker NXP Semiconductors NV. Companies “could just choose production locations and R&D locations wherever you wanted,” he said. “But I think we just have to stay realistic: Maybe these times are over. Now we are dealing with the world as it is going to evolve.”

Intel CEO Gelsinger is a major force behind government investment in new plants. Despite the naysayers, he believes public funding could help Intel lower the cost of trying to catch up on cutting-edge chips after falling behind Taiwan Semiconductor Manufacturing Co., known as TSMC, and South Korea’s Samsung Electronics Co. It would also make the U.S. and Europe more self-reliant.

“Let’s not waste this crisis,” Gelsinger told Bloomberg earlier this year. “It’s good economics, but it’s also national security.” Intel’s new plant in Magdeburg, which will start production in 2027, is part of an 80 billion-euro package of investment in Europe by the Californian company.

Whether the numbers stack up remains to be seen. The U.S. and Europe have some serious catching up to do, said SPRIN-D’s de la Vera. Japan, for example, is also promising state aid to boost production. New facilities include a $7 billion factory planned by TSMC in conjunction with Sony Group Corp. and Denso Corp.

South Korea also wants to become the world’s biggest chip producer, with companies and the government pouring a total $450 billion into the industry by 2030.

Why Does China Want Taiwanese Chips?

Achieving economies of scale that can compete with Taiwan’s business model is also going to be tough if each region is racing to build its own capacity. TSMC accounts for more than 50% of the global foundry market, or the business of purely making chips for other companies. Its customers include Apple Inc., which relies on Taiwanese chips for iPhones.

Indeed, the reliance on TSMC is the core concern: an invasion of the island by China would leave the world’s most advanced chips in the hands of Beijing. U.S. academic Jared McKinney recently suggested in a U.S. Army journal that Taiwan should protect itself by threatening to destroy chipmaking facilities so that Beijing would see its tech industry “immobilized” should it invade. He called it a “broken nest” strategy.

TSMC will have a new U.S. location operating in Arizona in two years and is now mulling a potential plant in Germany after European carmakers repeatedly expressed concerns about the impact from the chip shortage. But Taiwanese industry insiders remain skeptical of plans to relocate production back to the West.

“It’s not possible to turn back the clock,” TSMC founder Morris Chang told a Taiwanese tech association in October. “If you want to re-establish a complete semiconductor supply chain in the United States, you will not find it to be a possible task, even after you spend hundreds of billions of dollars.”

The federal money on the table is just a fraction of what the U.S. industry needs. And some executives are already wary of how governments are asserting themselves by slapping down mergers, limiting exports or banning working with industry partners.

The most recent example was Germany’s nixing of Taiwanese company GlobalWafer’s takeover of German rival Siltronic earlier this year. Industry officials say the move showed the West is turning inward when governments should develop stronger alliances with Asia.

The White House has quietly moved to stop Dutch company ASML Holding NV from exporting its cutting-edge equipment to China. ASML has an effective monopoly on advanced extreme ultraviolet lithography machines used by companies like TSMC.

The Trump administration began pressuring the Dutch government as early as 2018 not to authorize the sale of ASML’s EUV machines to China, according to people familiar with the talks. That pressure has escalated under Biden, with officials considering pushing the Dutch government to put in writing the de-facto export ban, according to people familiar with the internal deliberations.

The company has become increasingly frustrated with the intervention of the U.S., which is also debating whether to ask the Dutch to ban ASML from selling its mature deep ultraviolet lithography systems to China. “Any suggestion by any country to limit the shipment of the production equipment for mature technology to areas of the world where that technology is being produced is not a good idea,” said ASML CEO Peter Wennink. “We should not do that.”

U.S. and Europe Could Team Up

The U.S. and Europe will discuss their strategies on semiconductors as part of the Trade and Technology Council, but there’s still a long way to go to figure out if and how to coordinate government aid in the most strategic ways. A U.S. official said they want to avoid a subsidies arms race, though a lingering mistrust from the Donald Trump years has made the EU wary.

While American eyes are on China, the EU plans to add strings to subsidies that would ensure the bloc has the essential components in times of emergencies. These ideas follow lessons from the pandemic, when the U.S. and U.K. had quicker access to vaccines. EU Internal Market Commissioner Thierry Breton has said the U.S.’s Defense Production Act was a source of inspiration for the “security of supply” proposals.

The plans are not protectionist, nor are they seeking to make Europe completely autonomous, he said. Instead, they give the EU leverage to compete. “That’s the new geopolitics of supply chains,” Breton said.

There’s no shortage of skepticism, considering the EU tried to double production nearly 10 years ago and failed. Now, the overall goal is for Europe to make 20% of the world’s semiconductors by 2030. With global demand expected to as much as double, in practice that means quadrupling Europe’s production within eight years.

This time, the EU opened the door to providing public money for production of chips — a massive shift. But many companies in the region question whether the bloc should be placing so much weight on making the next generation of chips rather than the less advanced, more “mature” chips currently in shortage.

NXP CEO Sievers said the bloc should focus on providing first what the industry needs now. “Right away leapfrogging to leading edge only, I think would be missing the beat of what the European industry needs in the next couple of years,” he said.

Whatever type of chips end up being produced, industry insiders expect the U.S. and Europe will always be dependent on Asia for their materials, not least because of the global intricacies of supplies.

TSMC Chairman Mark Liu highlighted the connectivity in December, saying that some semiconductor chemicals required by Intel are shipped to the U.S. by Taiwanese suppliers. In other words, even American-made products rely on the outside world.

That’s what makes the plans by Washington and Brussels so unrealistic, said Jan-Peter Kleinhans, a researcher at the German thinktank Stiftung Neue Verantwortung in Berlin.