Millions of barrels of Russian oil are still finding a way to buyers almost a month after the country first invaded Ukraine, tempering concerns that a sanctions backlash would all but choke off supply and cause the market for physical cargoes to overheat.

Since Russia invaded Ukraine late last month, the market has been twisting on two vital questions: how much crude will Moscow end up selling, and where? There’s been a buyers’ strike across swaths of Europe in response to the invasion, but what’s less clear is how much other regions — especially Asia, the top demand center — will purchase.

“Russian barrels must look tempting,” said John Driscoll, chief strategist at JTD Energy Services Pte., adding that his view is that measures against the country will nonetheless curb buying of its crude over time. “Resourceful traders may explore ways to move cargoes — the Chinese won’t be intimidated by U.S. sanctions, and will remain the largest importer of Russian crude. India is the next one to watch.” 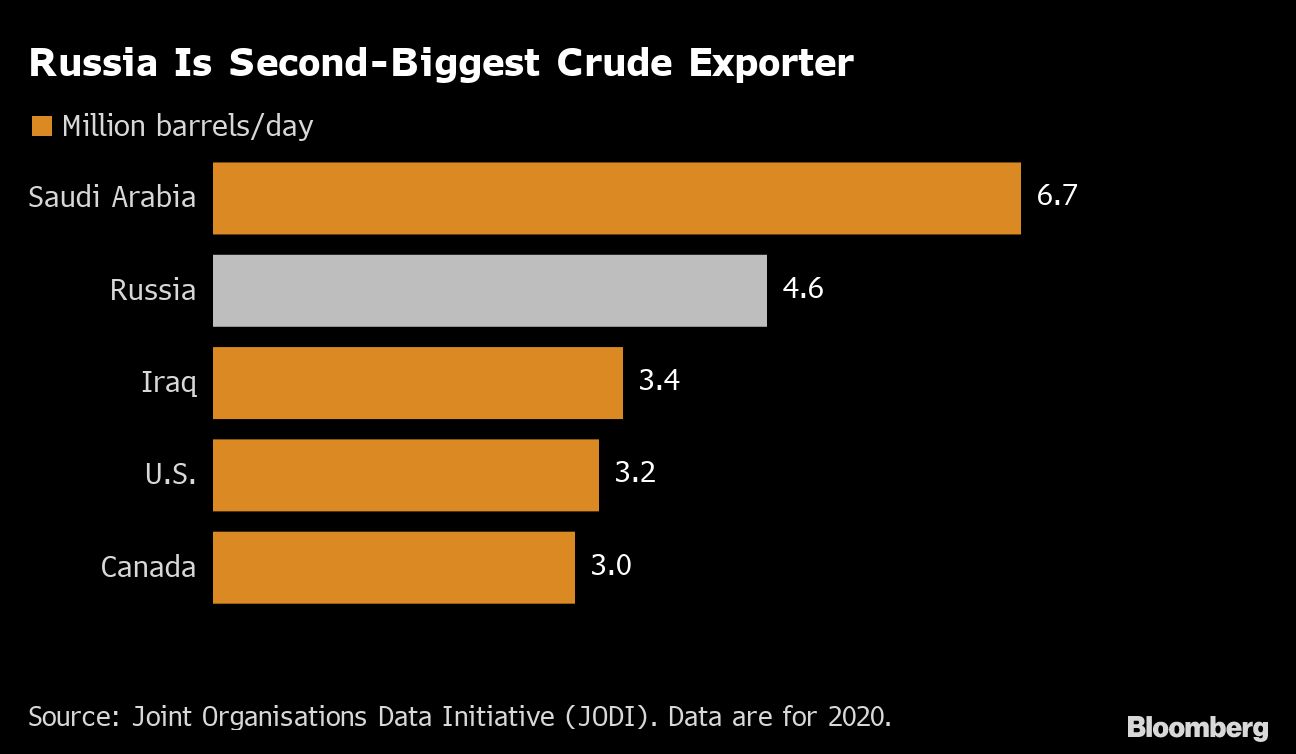 At least for now, what’s going on with the buying and selling of non-Russian oil suggests traders are becoming less fraught about the threat of supply shortages, even if trading the nation’s barrels isn’t risk-free, and spreads on Brent oil point to a market that remains incredibly tight by historical standards.

At the moment, there are no sanctions directly prohibiting purchases but there are worries about what steps might ultimately be taken if the war drags on. Financing, insuring and shipping of Russian petroleum have also become much more complicated by the measures that the west has taken.

European officials are debating the idea of an embargo on Russian oil sales, although the bloc is divided on the idea and Germany opposes such a step. European Union and NATO leaders are poised to gather in Brussels on Thursday to beef up their response to the crisis.

For now, though, traders appear to be taking the view that the flow of Russian oil indicates that the market won’t be as tight as first thought.

A flurry of offers for Middle Eastern barrels took place in the Asian spot market this week, according to traders. Importantly, that comes together with a slowdown in Chinese demand amid COVID-19 lockdowns, and wild price gyrations that’s kept many buyers on the sidelines.

The differentials at which Middle Eastern barrels sell, a key indicator of demand for them, have dipped after starting off strongly early this month. Abu Dhabi’s Upper Zakum crude for May loading was purchased by Thailand’s PTT Pcl at about $7.50 a barrel more than the Dubai benchmark this week. That compares with a premium of over $10 two weeks ago.

Crude cargoes from the Persian Gulf were thought to be a natural choice for Asian buyers in the absence of Russian cargoes.

Shortly after the invasion, more and more buyers became wary of Russian cargoes despite record discounts after the U.S. banned Russian oil imports and Shell Plc came under heavy criticism due to a purchase of Urals. The major, along with TotalEnergies SE and BP Plc, were among a swath of European buyers that stepped back.

While it’s still early in the trading and shipping process to gauge the volume of Russian crude that will ultimately flow to Asia in the coming months, the International Energy Agency said in a report last week that the nation’s oil production is forecast to slump by about a quarter next month, inflicting the biggest supply shock in decades.

Still, some deliveries to Asia are likely to stay, at least for now.

May shipments of Sokol crude — another variety from the Russian Far East — are being organized to some customers in northeast Asia who have committed volumes under long-term contracts and equity agreements, according to traders who sell and buy the grade.

May-loading cargoes of ESPO from eastern Russia were being offered at discounts to the Dubai marker against which they trade, compared with premiums for comparative grades from the Middle East. Chinese independent refiners were seen as most likely buyers, although no transaction has yet been heard this month amid a reduction in market transparency, traders said.

What’s adding to the slowness in spot transactions is lackluster demand from Chinese refiners including independent processors that have reduced operating rates amid a Covid resurgence that’s led to lockdowns.

The private plants, known as teapots, make up a quarter of the nation’s processing capacity. They are running at a five-year low, according to industry consultant OilChem. At least two of them sold back cargoes of crude from West Africa and Latin America in a rare move earlier this month.

Diminished appetite from Chinese buyers has also hindered purchases of West African cargoes, dragging down offer levels for crude from producers like Angola, traders said. A handful of Angolan cargoes for April loading are still left unsold even after the release of program for May, they said.

In Europe, traders said the impact of missing barrels of Urals hasn’t been as profound in terms of market tightness as they had previously expected, with most European refiners already having secured their required cargoes through the middle of next month.

Read next: Europe Is on a Wartime Mission to Ditch Russian Oil and Gas

European buyers are more likely to secure cargoes from the North Sea such as Johan Sverdrup to replace their Urals, and Iraq’s Basrah Medium is another variety that could be picked up as an alternative to the Russian grade, the traders added.