Global supply chains are nearing a turning point that’s set to help determine whether logistics headwinds abate soon or keep restraining the global economy and prop up inflation well into 2022, according to several new barometers of the strains.

Just a week before the start of Lunar New Year, the holiday celebrated in China and across Asia that coincides with a peak shipping season, economists from Wall Street to the U.S. central bank are unveiling a string of models in the hope of detecting the first signs of relief in global commerce.

From Europe to the U.S. and China, production and transportation have stayed bogged down in the early days of 2022 by labor and parts shortages, in part because of the fast-spreading omicron variant.

Among the big unknowns: whether solid demand from consumers and businesses will start to loosen up, allowing economies to finally see some easing in supply bottlenecks. Fresh indicators from the private and official sectors are in high demand because there’s still much uncertainty in industries overlooked by mainstream economics before the pandemic.

Once the realm of trade and industrial organization experts, supply chains “have shifted to center stage as a critical driver of sky-high inflation and a stumbling block to the recovery,” Bloomberg Chief Economist Tom Orlik said. “The profusion of new indices and trackers won’t unblock the arteries of the global economy any quicker. They should give policy makers and investors a better idea of how fast — or slowly — we are getting back to normal.”

Bloomberg Economics’ latest supply constraint index for the U.S. shows that shortages have trended modestly lower for six months. Even so, strains remain elevated, and the wave of worker absenteeism is adding to the problems at the start of 2022. 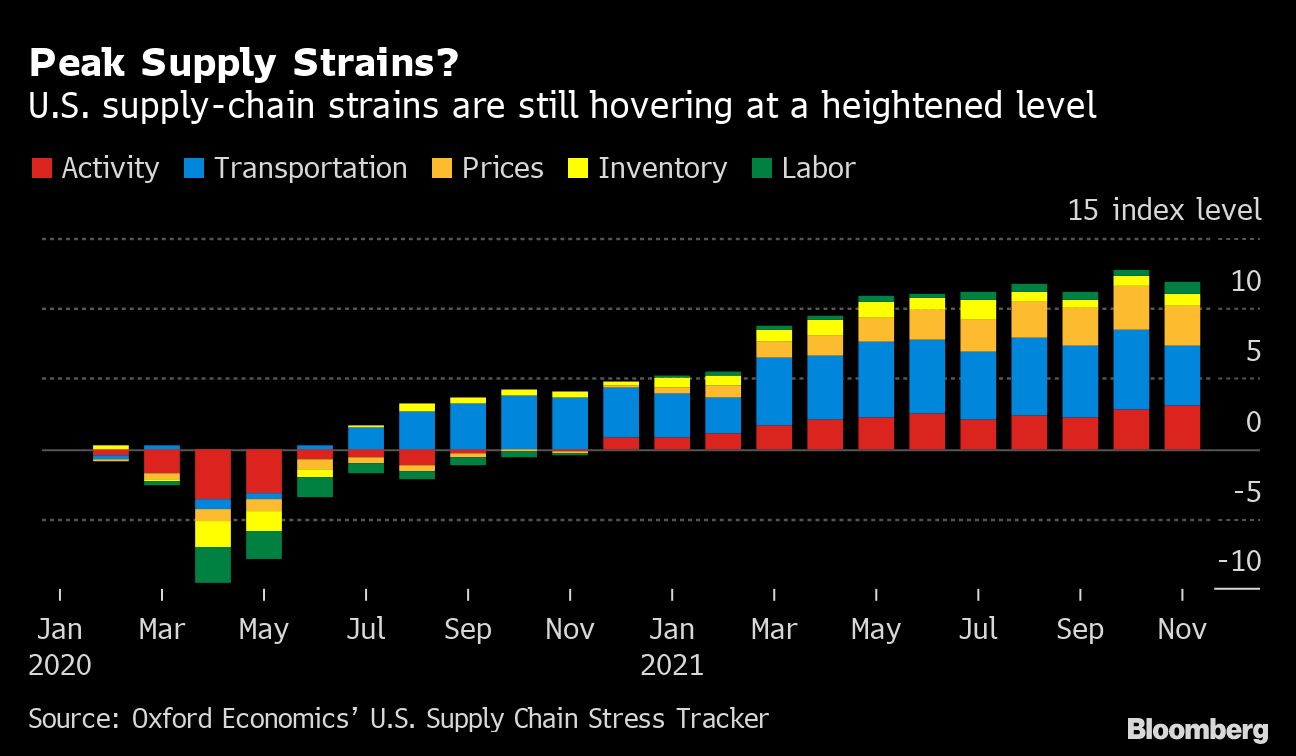 Kuehne+Nagel International AG last week launched its Seaexplorer disruption indicator, which the Swiss logistics company says aims to measure the efficiency of container shipping globally. It shows current disruptions at nine hot spots are hovering near “one of highest levels ever recorded,” with 80% of the problems happening at North American ports.

Another freight forwarder, San Francisco-based Flexport Inc., last year developed its Post-Covid Indicator to try to pinpoint the shift by American consumers back to purchasing more services and away from pandemic-fueled goods. The latest reading released Jan. 14 “indicates the preference for goods will likely remain elevated during the first quarter of 2022.”

Flexport has a new Logistics Pressure Matrix with a heat map showing demand and logistics trends, and much of those numbers are still flashing yellow or red. Flexport supply chain economist Chris Rogers said in a recent online post that similar grids for Asia and European markets will be part of the research.

Adding their stamp to the burgeoning genre of supply stress indicators were three Ph.D. economists from the Federal Reserve Bank of New York, with the launch of its Global Supply Chain Pressure Index. Rolled out earlier this month, it shows that the difficulties, “while still historically high, have peaked and might start to moderate somewhat going forward.” The New York Fed said it plans a follow-up report to quantify the impact of shocks on producer and consumer price inflation.

Less than a week later came the Morgan Stanley Supply Chain Index. It lined up with the Fed’s view that frictions have probably peaked, though some improvement ahead will come from a slowdown in the demand for goods.

“Supply disruptions remain a constraint to global trade recovery, but as firms continue to make capacity adjustments to address them, capacity expansion could mitigate these,” Morgan Stanley economists wrote in a report Jan. 12.

Citigroup Inc. last week released research that was less optimistic yet complementary to the New York Fed’s work, which Citi said doesn’t factor the role of surging demand as a contributor to the supply disruptions.

Co-written by Citi’s global chief economist Nathan Sheets, a former U.S. Treasury undersecretary for international affairs, the bank’s analysis “gives a more complete, and intuitive, picture of the current situation.” While strains may ease in coming months, Citi said, “these supply chain pressures are likely to be present through the end of 2022 and, probably, into 2023 as well.”

In Germany, the Kiel Institute for the World Economy updates twice a month its Trade Indicator, which looks at flows across the U.S., China and Europe. Its latest reading Jan. 20 shows that along the key trading route between Europe and Asia, there are 15% fewer goods moving than there would be under normal times. The last time the gap was that large was in mid-2020, when many economies were reeling from initial lockdowns, Kiel said.

More recently, “the omicron outbreak in China and the Chinese government’s containment attempts through hard lockdowns and plant closures are likely to have a negative impact on Europe in the spring,” says Vincent Stamer, head of the Kiel Trade Indicator, said in a post last week. “This is also supported by the fact that the amount of global goods stuck on container ships recently increased again.”

Mixed signals were also flashing in the latest reading of Oxford Economics’ Supply Chain Stress Tracker, which held some encouraging news for the U.S. economy to start the year. Inventory pressures eased modestly and transportation improved, but logistics bottlenecks combined with stressed signals from prices and labor.

That, along with sustained upward pressure on inflation, will likely create more political problems for U.S. President Joe Biden, whose White House established a task force to encourage links across the supply chain to “stop finger-pointing and start collaborating.”

The Biden administration is monitoring real-time data obtained from businesses operating in China to determine whether omicron outbreaks there pose a risk to U.S. supply chains. It’s too soon to tell, an official said last week.