Home » U.S. Importers Are Paying Anything to Avoid Shipping Woes

U.S. Importers Are Paying Anything to Avoid Shipping Woes

U.S. importers, straining under a tapped-out supply chain, are increasingly offering top dollar for long-term shipping contracts that may not even be honored as they try whatever it takes to guarantee the arrival of their products.

The pandemic-driven boom in demand for goods pushed both contract and spot rates for shipping to records — getting merchandise from place to place costs about 11 times more than it did before the COVID-19 outbreak. With demand so high and capacity limited, importers are paying up to avoid a repeat of 2021, when some contracts set at lower prices weren’t honored, leaving customers without their stuff.

Importers are accepting higher contract rates because they “fear that the market can get even worse,” said Lars Jensen, chief executive officer of Copenhagen-based Vespucci Maritime, a shipping market-analysis firm. “Fear of losing out on capacity to some degree trumps fear of paying too much right now.”

Contracts are typically negotiated on a yearly basis with importers and carriers agreeing to a minimum capacity level between certain ports, and the spot market used for freight shipped outside of the agreed terms. But this year, importers are prepared to pay more, locking in higher, pandemic-era prices for two or even three years — despite some predictions they won’t stay as elevated — in order to protect themselves from the volatile spot market. 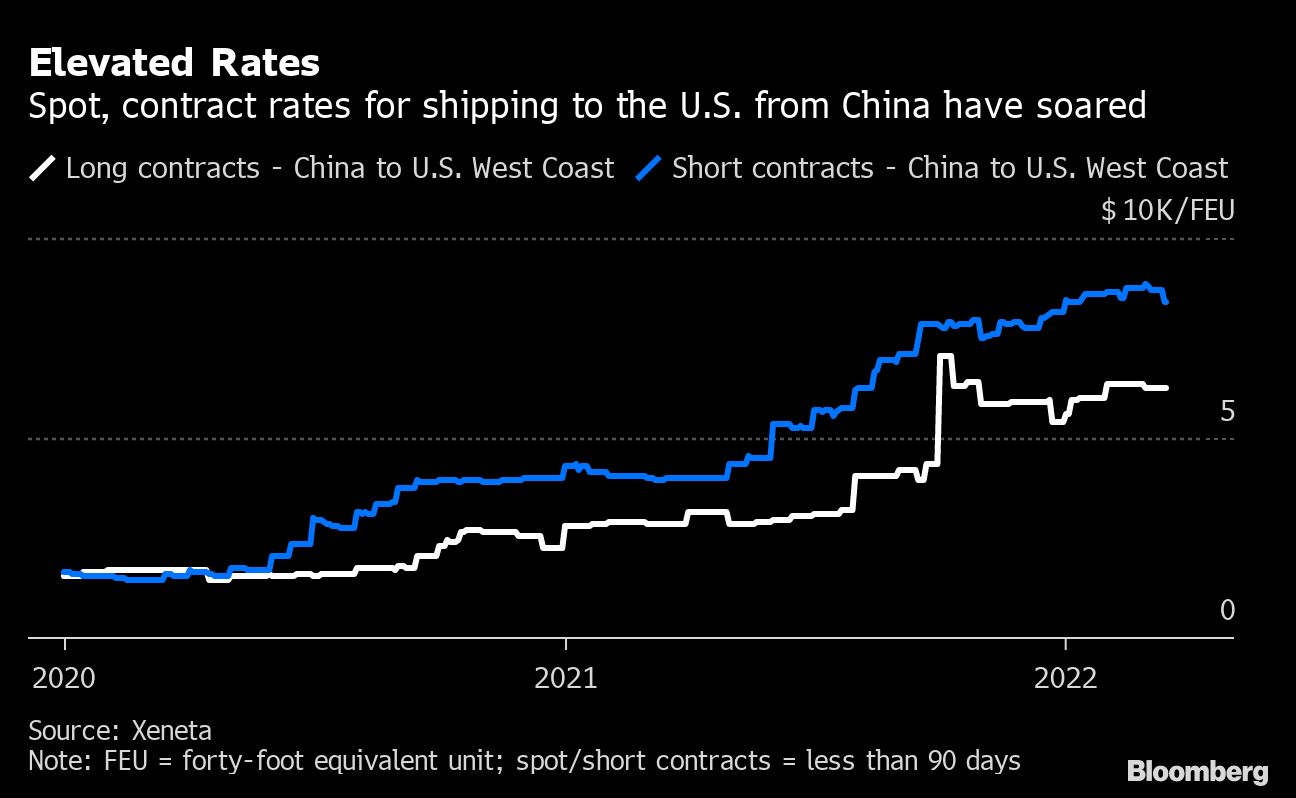 The shipping chaos has completely changed how David Kunelius, president of Minnesota-based medical device company MedSource Labs, gets merchandise to the U.S. from Asia.

“Pre-pandemic, we would set up shipping contracts for an entire year,” paying about $4,000 per 40-foot container, which allowed for planned investment in research and development, Kunelius said. But starting last year, MedSource Labs was getting a new quote for cargo every two weeks, increasing by thousands of dollars each time to about $23,000 now.

Rates are unlikely to return where they were before the pandemic, when carriers suffered from overcapacity and low profits for years, said Stephanie Loomis, vice president of international procurement at freight forwarder CargoTrans, Inc.

“It’s settling into the market now that the days of really very low, ridiculously cheap ocean rates are over,” she said, adding that prices are unlikely to stay at these levels for more than a couple of years and will likely settle a little lower.

While shippers are interested in securing longer-term freight contracts earlier and for greater durations to best ensure reliability and predictability, carriers only have so much space aboard ships. Orders for new capacity reached a record last year, but that will only relieve markets in 2023 and 2024, according to VesselsValue data.

And with supply chain disruptions stemming from Russia’s invasion of Ukraine and China’s Covid Zero policy locking down major manufacturing regions in the Asian nation, things could get harder to predict in the short term. All this while U.S. goods imports continue at records amid decades-high inflation rates.

The major ocean carriers have faced criticism for charging such high rates, leaving many shippers and importers — or beneficial cargo operators known as BCOs — without options.

President Joe Biden asked Congress to look at the biggest ocean carriers and whether the three major shipping alliances they’ve formed are anticompetitive. Exporters are paying the price too, as carriers often skip picking up goods to rush containers back to Asia for another load of more lucrative imports to the U.S. West Coast.

Besides a contract rate with a guaranteed allocation of space, a carrier may take 20% of your contracted containers at a lower price with guaranteed space — provided importers also book others at premium rates, Khachatryan said.

Last year, ocean carriers offered a lot of “premium services,” including ensuring cargo was loaded on the first ship out, for example. Those extra charges became a substantial part of container movement from Asia to the U.S. and while they’re less common right now, they could make a comeback, Loomis said.

Meanwhile, importers like Kunelius continue to battle the volatility.

“If we can get back to some of those more stable prices on the long-term contracts, we would definitely do that.” He said. For now the company will pass some of the price increase on to its distributors, who stock hospitals, emergency services and fire departments. “It can’t last forever,” Kunelius said.