Some supply strains in the U.S. are easing, two years after a jump in demand started emptying shelves, snarling shipping and sowing the seeds of soaring inflation.

The line of 25 cargo ships headed to Southern California’s two big ports is less than a quarter of the record backup in January, and spot container rates have dropped almost 20% this year. Flexport Inc.’s average transpacific shipping journey of 102 days is the quickest since November. Delays moving containers out of rail depots in Detroit and Memphis are shorter than they were in September, according to Hapag-Lloyd AG.

But for every sign that a cooling economy will give supply chains room to rebalance, there’s a reason for skepticism. On the East Coast, ship bottlenecks are building again. The dwell time for containers is still climbing at rail yards near Chicago and Kansas City. At 9.6 days in April, the wait to move freight on rail from the adjoining ports of Los Angeles and Long Beach was the longest since July.

The muddled picture is dividing observers. To some, the logistics links between factories and consumers will get stretched again when China allows factories to run full steam. Others sense the start of a longer-term weakening in the demand for goods as inflation erodes purchasing power and spending on services picks up.

Howe Wallace is in another camp — those who’ve given up guessing.

“I’ve stopped just speculating what’s going to happen for the next year,” said Wallace, chairman and CEO of Bartow, Florida-based PalletOne Inc., a large producer of wooden pallets. He said business is “still fairly strong” but the next several months are “too uncertain to call.”

Watching the pallet market is one way to track the economy’s subterranean strength. Here are a few obscure gauges from the supply chain world that give clues about the degree of the slowdown ahead:

An oft-forgotten bellwether of activity is the demand for product packaging — corrugated boxes. According to a Bloomberg Green Markets survey that’s yielded data for the past nine months, sentiment of packaging producers has recently gone negative after staying mostly strong for the past two years.

Through the pandemic, the demand for box packaging was so strong that the time from order to delivery peaked at 22 days in February. With order backlogs shrinking, the lead time shrank by three days last month to 14, and industry participants believe it could fall below 10 days by July, according to Bloomberg Intelligence analyst Ryan Fox.

Experienced managers in the industry see corrugated packaging as the proverbial canary in the coal mine, but one that might not be flat-lining just yet.

“They believe that packaging is a leading indicator to the economy since so many products are shipped in boxes,” Fox said. “And yet some see the dip in demand as needed respite. They’ve been killing themselves for the last two years so the return to normal is welcomed.”

Another real-time pulse of physical commerce is the prevailing rate to move goods on flatbed trucks excluding fuel surcharges, which is only down about 3% from the peak reached a year ago, according to Bloomberg Intelligence senior logistics analyst Lee Klaskow. These rates are still almost 57% higher than they were in May 2019. 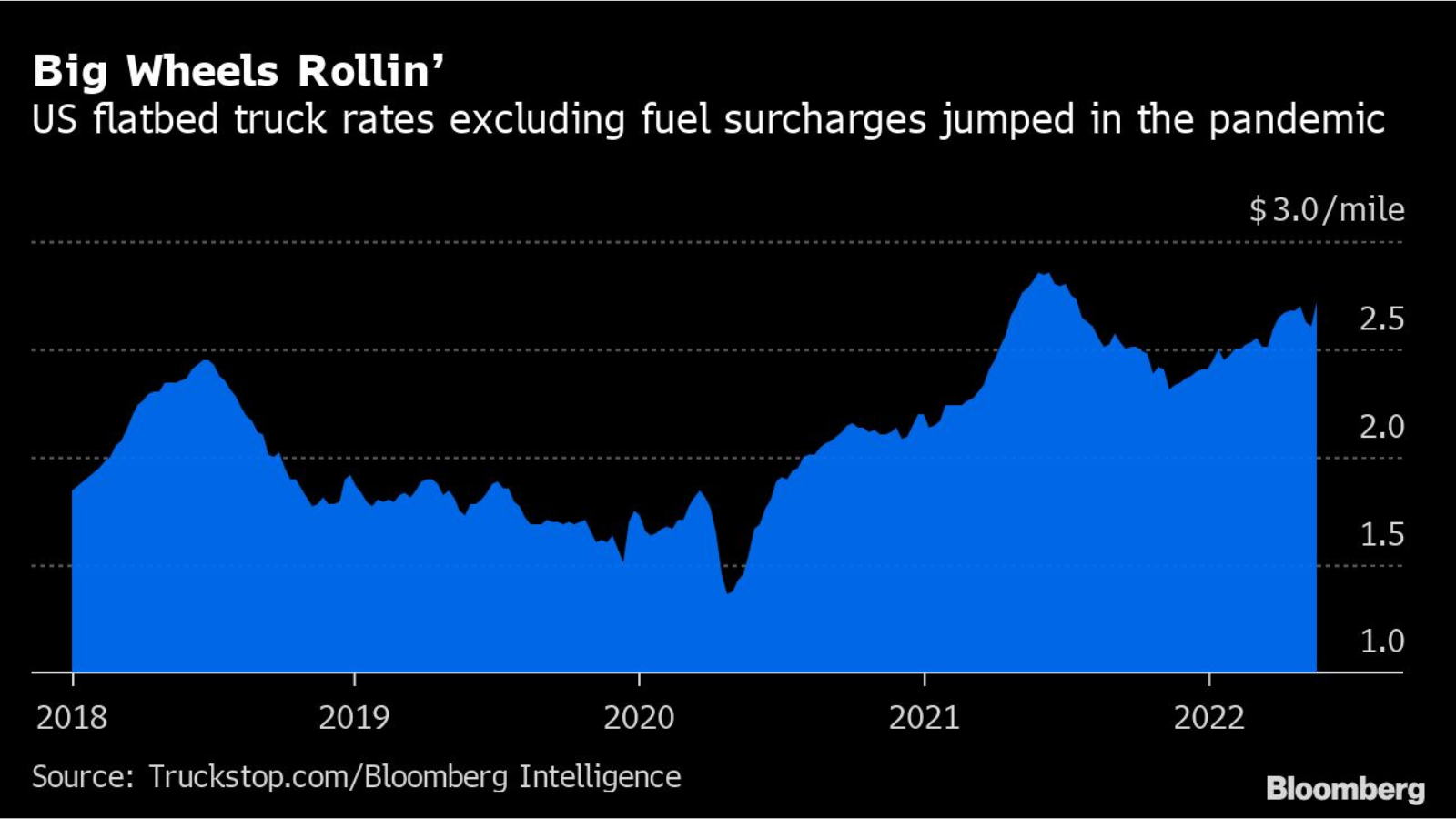 “Things are moderating but will remain better than before the pandemic,” Klaskow said.

Some smaller truck carriers that entered the market recently and now face crippling diesel costs will be forced out of business in a spot freight-market correction, though the contract market has held up much better, Klaskow said. Contractual rates for flatbed trucking excluding fuel surcharges were up 3.7% in April compared with a 13.1% increase in April 2020, he added.

Former Federal Reserve Chairman Alan Greenspan liked to study old-school numbers like scrap metal prices and railroad shipments. Consumers have purchased a lot of goods since early 2020, so it’s still instructive to monitor how much merchandise and bulk commodities are still crisscrossing the country on trains.

North American rail volume during the first 20 weeks of 2022 totaled 13.5 million carloads and intermodal units, down 3.8% from a year earlier, according to data from the Association of American Railroads. So far this year, intermodal volumes — those goods traveling by sea, road and rail — have largely mirrored 2019 levels but trailed 2021’s traffic amid lingering congestion.

According to Bloomberg Intelligence, the four-week moving average for train velocity has slowed 5%, while dwell time has risen 9%.

The sluggishness doesn’t look to end in the near term. China’s lockdowns might give American railroad operators challenges in the weeks ahead as shipping containers from Asia flood already slammed ports, according to Klaskow.

At Virginia Tech, home of the nation’s leading pallet engineering lab, they claim “pallets move the world,” and it’s not much of an exaggeration given there are almost 2 billion in the U.S. alone.

As goods purchases outweighed services spending over the past two years, prices for the new wooden pallets — the base of a so-called unit load — have jumped 59% nationally since the start of 2020 and are still rising. 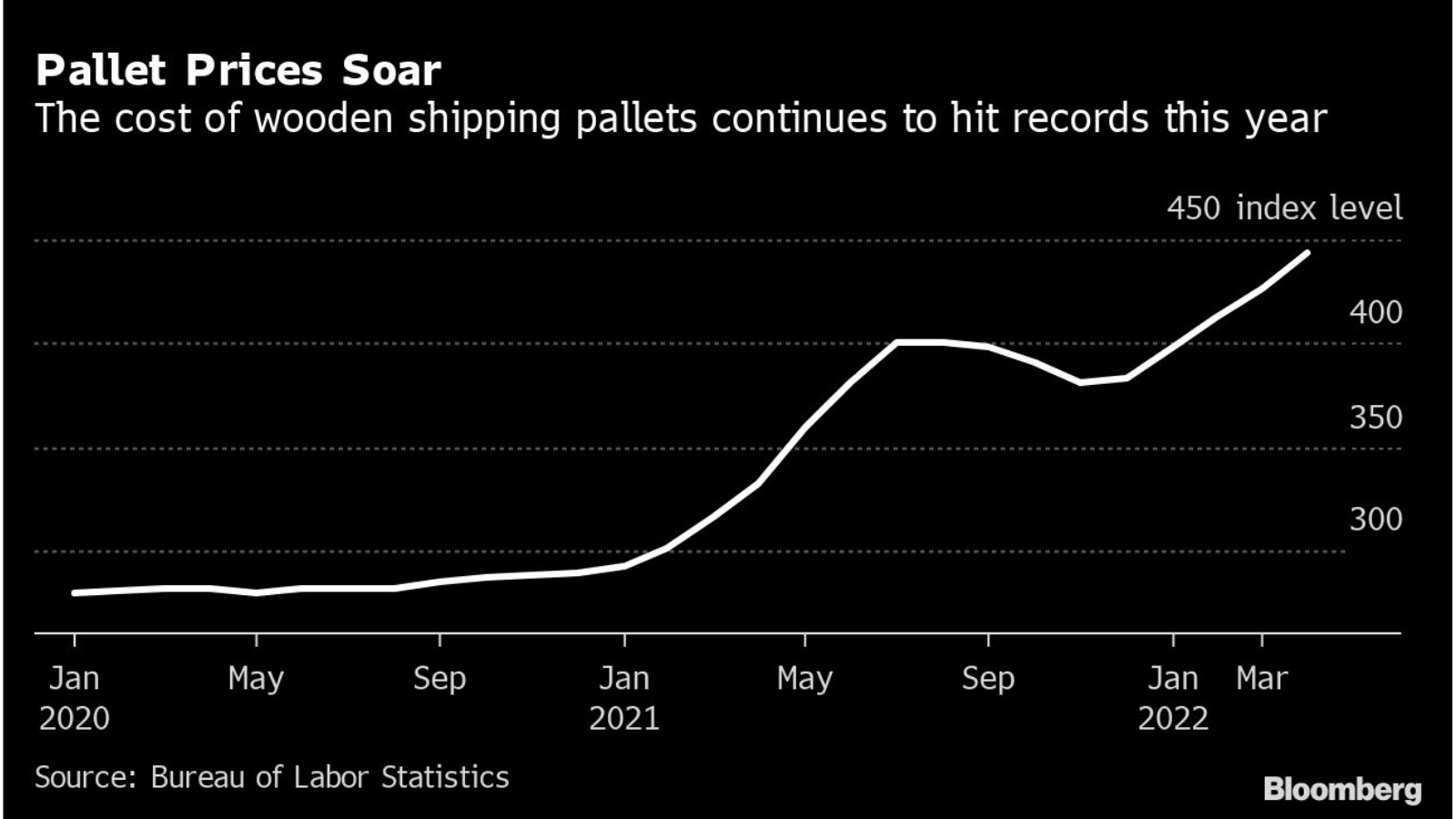 Chaille Brindley, editor of the Pallet Profile, says demand is still strong. “Pallet manufacturers and recyclers remain very busy. Many are worried about a downturn that could be coming. But they haven’t seen it materialize yet,” he wrote in a market report this month.

Higher transport costs, severe labor shortages and sustained demand are keeping pallet prices high. For example, in the mid-Atlantic region, a top-quality used pallet might sell for $12-$13, but in the West the price might be $18-$20 if you can find them, according to Brindley.

In some regions, that’s almost double the pre-pandemic cost.