Home » Amazon Is Building a Property Empire, Quietly Buying Land Across the U.S.

Amazon Is Building a Property Empire, Quietly Buying Land Across the U.S.

The 193 acres just outside Round Rock, Texas, were coveted by some of the biggest developers in the U.S.. Located a few miles north of the booming city of Austin, the raw parcel could be used for virtually anything given the state’s lenient land-use laws. So when the prominent Robinson family put the property on the market last year, there was strong interest from a range of real estate players, including home builders, private equity giant Blackstone Inc. and Prologis Inc., an industrial landlord that rents out warehouses across the country. But when the successful bidder emerged in October, it wasn’t a real estate firm. It was the world’s largest e-commerce company: Amazon.com Inc.

Starting about three years ago, the Seattle-based colossus quietly began searching for property in key U.S. markets such as Southern California, Texas, Illinois, Florida and the Bay Area. Between 2020 and 2022, Amazon tripled the amount of built industrial space it owns in North America, according to company filings. Sometimes Amazon buys existing buildings, such as defunct call centers, but it also purchases bare land, of which the company acquired about 4,000 acres in the same period, says real estate researcher CoStar Group Inc. Amazon plans to use much of the real estate for a new generation of towering fulfillment centers that can store a wide variety of products close to customers in populous areas, according to people familiar with the strategy.

Buying land is a major shift for Amazon, which historically relied on a handful of developers to find property, build fairly simple warehouses and rent them back to the company. Now Amazon is increasingly taking parts of the development process in-house, often bidding against long-time partners for the best space.

It’s a potentially risky strategy that exposes Amazon to the vagaries of the industrial real estate market. The company also overbuilt during the pandemic and is saddled with too much warehouse space now that the surge in online shopping has decelerated. As a result, Amazon is looking to sublease space it doesn’t need and has slowed its warehouse expansion. “Like all companies, we’re adapting to the availability of real estate and location of our customer demand, and we’re also constantly evaluating our approach based on our financials,” spokesperson Kelly Nantel said in a statement.

But the company said there is no change in its long-term real estate strategy. Executives remain committed to securing land in the right locations to fulfill founder Jeff Bezos’ vision of making an online purchase as instantly gratifying as a trip to the store. If Amazon doesn’t keep marching closer to customers now, it could permanently surrender that proximity to retail competitors like Walmart Inc. that are just a short drive away.

“There’s going to be something on the other side of all of this investment for the consumer,” said John Blackledge, an analyst at Cowen and Company LLC. “People will buy more on Amazon when they see they can get it in five hours instead of in two days.” 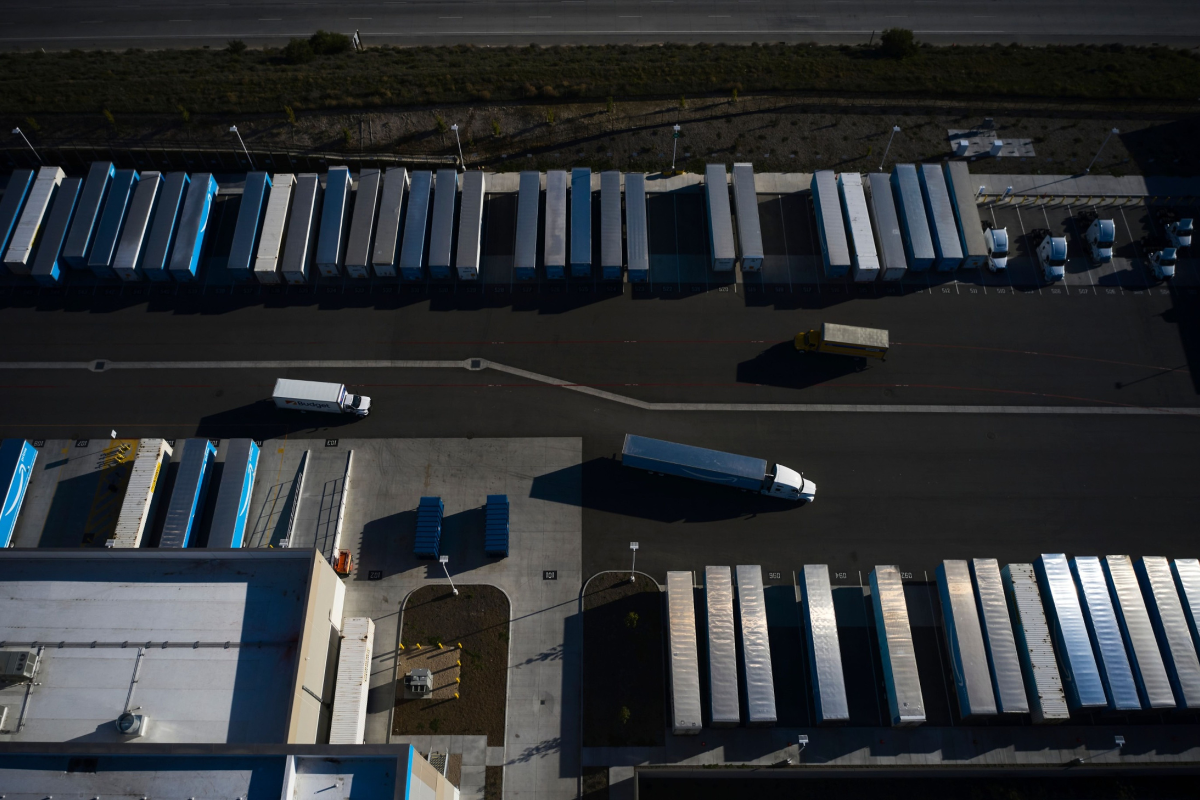 Amazon has spent at least $2.2 billion acquiring land or properties slated for redevelopment in the past two years, according to CoStar, which says the estimate is conservative because some states, including Texas, don’t disclose purchase prices.

In March 2020, the company shelled out $30 million for 63 acres in a bustling industrial area between San Diego and the U.S. border with Mexico. Then it built a 130-foot (40-meter) tall, state-of-the-art facility that can process a large assortment of products for same-day shipping. The company was opening new logistics facilities at the rate of about one every 24 hours at the time, so few realized the transaction represented a departure from standard practice.

Amazon had historically preferred not to tie up money in real estate. Bezos, keen to run the business like a startup for as long as possible, always had other plans for the cash, the people said. He liked to invest in potentially transformative, long-term bets — cloud-computing, the Alexa voice-activated platform, building a movie studio.

Bezos’ aversion to buying property confounded some Amazon real estate executives, especially as the company matured and its needs shifted, according to people familiar with the matter, who requested anonymity to discuss an internal matter. Retail competitors like Walmart own most of their U.S. stores, giving them more control and assets that appreciate. A real estate portfolio can be sold and leased back to help a company get through lean periods without giving up the use of the land. There were also concerns that Amazon sometimes left money on the table in its dealings with developers. Once Amazon signs a long-term lease, the property typically surges in value; the company often gets none of the upside despite paying rent for 20 years.

Amazon’s push to get deliveries to customers the same day was an ideal moment to rethink Bezos’ strategy. The company needed industrial space close to customers where land is scarce and competition is fierce. Erecting boxes on vacant land in the rural outskirts no longer worked. Amazon had to cram more products into smaller urban lots, requiring it to build more specialized and expensive taller buildings. Industrial property in the shadow of big cities is increasingly scarce and desired by a jostling pack of players, from distribution companies like United Parcel Service Inc. and FedEx Corp. to grocers, restaurant chains and car dealerships. The vacancy rate for industrial space is at an all-time low of 3.4% despite a construction spree fueled by pandemic-related demand. 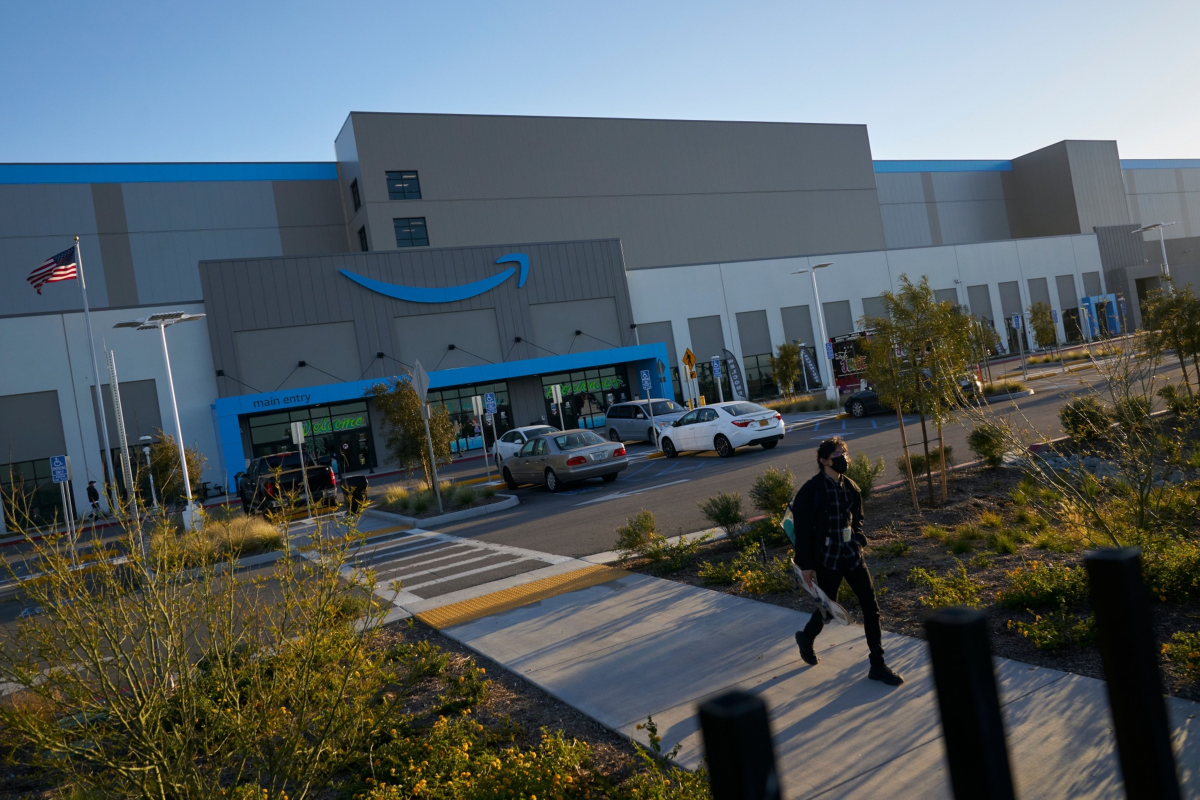 Buying land is risky. Developing it is even more so because Amazon itself must negotiate the local bureaucracy and politics. But executives feel they have no choice, according to people familiar with the strategy, because the new generation of fulfillment centers are several orders of magnitude more complicated than the 40-foot boxes currently dotted around the country.

The new facilities can be 100 feet tall or more, are packed with state-of-the-art automation and require lots of electricity. Warehouse developers typically avoid projects that are too expensive and specialized, especially when space in 100-year-old brick warehouses can still fetch a premium in the right location. It’s easy enough to find a new tenant for a simple warehouse but much harder to re-lease a facility purpose-built to Amazon’s exacting specifications.

The new facilities can cost twice as much to build as typical warehouses, which currently run about $200 per square foot. So Amazon is courting a new class of investor to help finance the expansion besides developers narrowly focused on building for profits. USAA Real Estate Co., Softbank Group Corp.’s Fortress Investment Group LLC and GLP Capital Partners LP are among the investment firms interested in financing Amazon’s expansion with transactions that more closely resemble corporate bonds than lease agreements.

Unlike developers who worry whether the building will appeal to the next tenant, these investors focus more on the credit-worthiness of the borrower. They’re also often willing to accept a lower return — paid by Amazon over approximately 20 years — since the real estate can shelter profit from other investments from taxes, according to Eric Frankel, a commercial real estate consultant and director at Validus Capital. “These new warehouses are so specialized they’re more like manufacturing facilities,” he said. “So Amazon needs to find different financing partners.”

Amazon doesn’t win every bidding war. The company lost the suburban Chicago headquarters for Allstate Corp. and a 100-acre parcel near Miami to industrial real estate firms, according to people familiar with the matter. But Amazon is prevailing often enough to upend longstanding relationships with companies that suddenly find themselves competing for the best land with a deep-pocketed rival. Amazon will still pay developers to oversee warehouse construction, but for a paltry fee in the $5 million range compared with profits of up to $50 million they made by converting vacant land into a brand new facility with Amazon as a tenant, according to people familiar with the matter.

For developers, the new strategy makes dealing with Amazon more complicated. Many are hesitant to show the company land they’re hoping to acquire and then lease to the e-commerce giant, fearing that Amazon will decide to try and buy it, according to people familiar with the situation, who requested anonymity because they continue to deal with the company. As Amazon considers other strategies, including buying and developing parcels itself, says a person familiar with its strategy, the company has been abruptly scuttling deals. Over the last year, Amazon has backed out of dozens of proposed delivery centers, according to developers and brokers.

“People are pissed off,” said one real estate developer who has done business with Amazon and had a recent deal fall through. “They’re just cutting their partners out who helped them get to where they are right now.” The company denied relations with developers have soured and said it needs them as partners as much as developers need Amazon.

The question now is how Amazon will adapt a boom-era strategy to current economic conditions. Online sales growth is slowing, interest rates are rising, and some analysts expect a recession in the coming months. The company has already reduced the number of new multistory warehouses it plans to build in the coming years to about 10 from as many as 40, according to people familiar with the matter. “Our plans continue to evolve, and we’re unable to confirm future builds or launches,” spokesperson Nantel said.

Executives also are debating whether to unload some of the real estate they don’t immediately need or hang on to it for the day that demand picks up again, the people said. Those who favor keeping all of the properties say it would be even more expensive and potentially impossible to secure the same space in the future. How the debate is resolved will depend in part on who Chief Executive Officer Andy Jassy chooses to replace retail and logistics chief Dave Clark, who recently announced he was leaving to run logistics startup Flexport Inc. Clark’s successor will have to weigh the pitfalls of investing in faster delivery at a time consumers are starting to pull back.

The 193-acre property Amazon bought last fall in Round Rock captures the potential promise and peril. On the one hand, building a next-generation warehouse near Austin would position the company to meet the needs of a fast-growing region for years to come. On the other, if a recession materializes and online sales growth continues to slow, Amazon could find itself stuck with a pricey piece of land.

Already the company seems to be hedging its bets. Amazon was moving expeditiously toward building the new facility, hosting community meetings to win over local residents, and was slated to begin the permit application process this summer. Then, on May 19, an Amazon economic development manager told city officials the company was putting the project on hold indefinitely.

“As mentioned in our recent earnings report, customer demand patterns have stabilized and this provides an opportunity to better match our capacity and demand,” Jessica Breaux wrote in an email. “We will re-engage with the city and neighboring community when the timeline for this site is more defined.”