The car industry, already grappling with a shortage of semi-conductors, is now seeing another source of supply chain concern: a lack of ships.

Earnings for freighters that move autos and industrial machines across the globe have surged to about $80,000 a day, the highest in data since at least 2000, according to Clarkson Research Services Ltd. a unit of the world’s largest shipbroker.

That represents another small headwind — seaborne trade in cars is a fraction of overall activity — for the industry. The likes of Ford Motor Co. and General Motors Co. already painted a gloomy outlook in recent months, driven primarily by semi-conductor shortages impeding production. 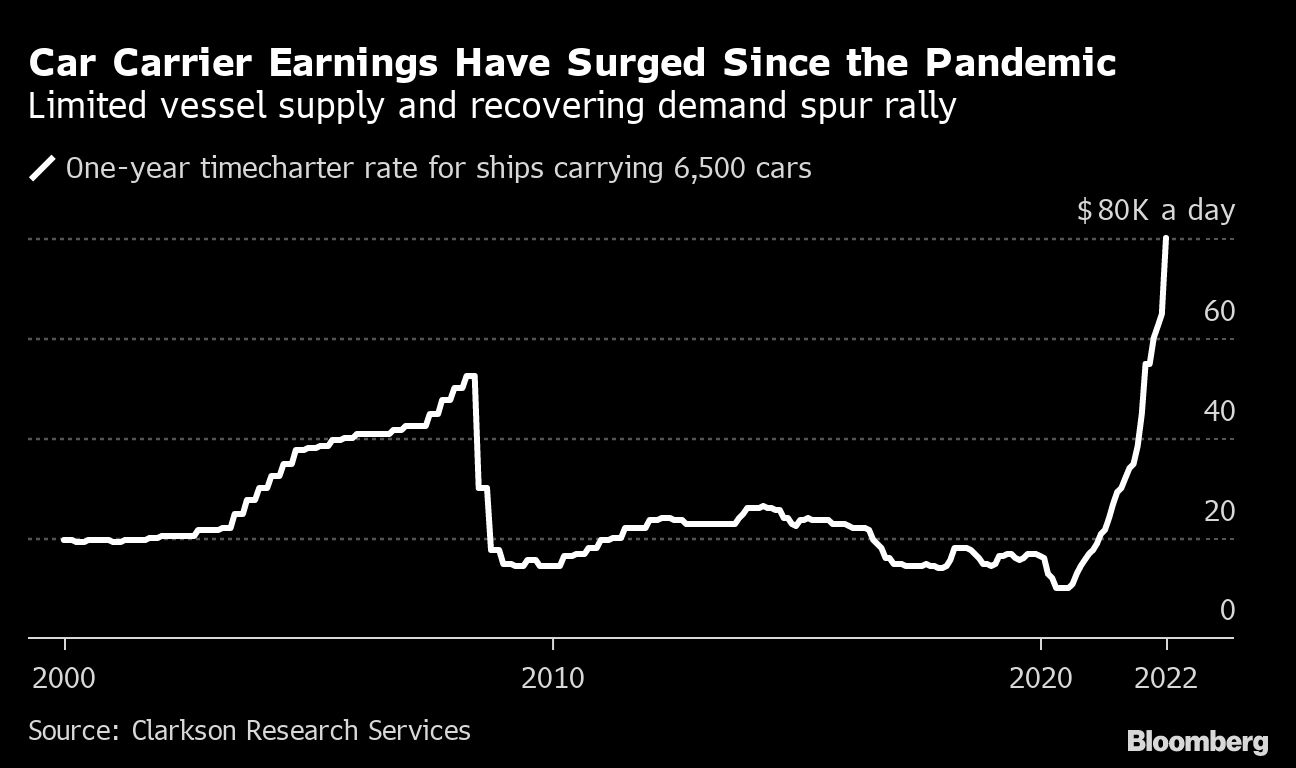 But a stagnating vessel fleet alongside a steady recovery in demand since the nadir of COVID-19 has now spurred record rates for ships that carry as many as 6,500 cars across the globe. Over a 60-day voyage that would imply about $740 per car, up about fivefold since before the pandemic, according to Bloomberg calculations based on Clarkson data.

The surge has some companies worried about being able to secure ships to haul vehicles, according to Georg Whist, Chief Executive Officer of Gram Car Carriers ASA.

“People are concerned they can’t get hold of tonnage,” he said by phone. “It’s under-investment for many years, and when demand is still there, the day comes when it pops.”

Cars are generally carried on so-called roll-on roll-off (ro-ro) ships, most of which are specialist carriers. The U.S., Europe and U.K. are among the biggest import markets, according to Clarkson. Whist said a growing portion of exports are coming from China, further stretching the fleet.

Gram said this week that it signed a five-year deal to hire out one of its vessels at an average rate of $60,000 a day.

That’s a sign of currently “mind-boggling rates,” Fearnleys Securities analysts including Oystein Vaagen wrote in a note. The company’s shares rose 15% on Sept. 20 and a further 6% on Sept. 21.

Other listed owners, including Hoegh Autoliners ASA and Wallenius Wilhelmsen ASA, have also climbed over the past few days.