Huge Sanctions Are Looming for the Fuel That Powers the World

An unprecedented chunk of the global diesel market, the workhorse fuel of the global economy, is just weeks away from being subject to aggressive sanctions.

From February 5, the European Union, the G-7 and its allies will attempt to impose a cap on the price of Russia’s fuel exports — the latest punishment for its invasion of Ukraine. That will coincide with an EU prohibition on almost all imports of Russian oil products.

Similar measures are already in place on the country’s crude shipments, but it is the cap and ban on refined fuels — and in particular diesel — that has some oil-market watchers concerned about the potential for price spikes.

Prior to its invasion of Ukraine, Russia was Europe’s largest external supplier of the fuel, and the continent has continued to buy in big volumes right up to the cutoff. As a result, the sanctions are likely to see a great rerouting of global diesel flows — aided by Russia’s new crude buyers sending fuel back to Europe. In the short-term, there’s a risk of higher prices.

“The loss of Russian barrels is huge and replacing them will be a huge logistical challenge,” said Keshav Lohiya, founder of consultant Oilytics. “But the market is pricing in less panic as markets and trade flows have proven resilient. This will be a new rerouting of diesel.” 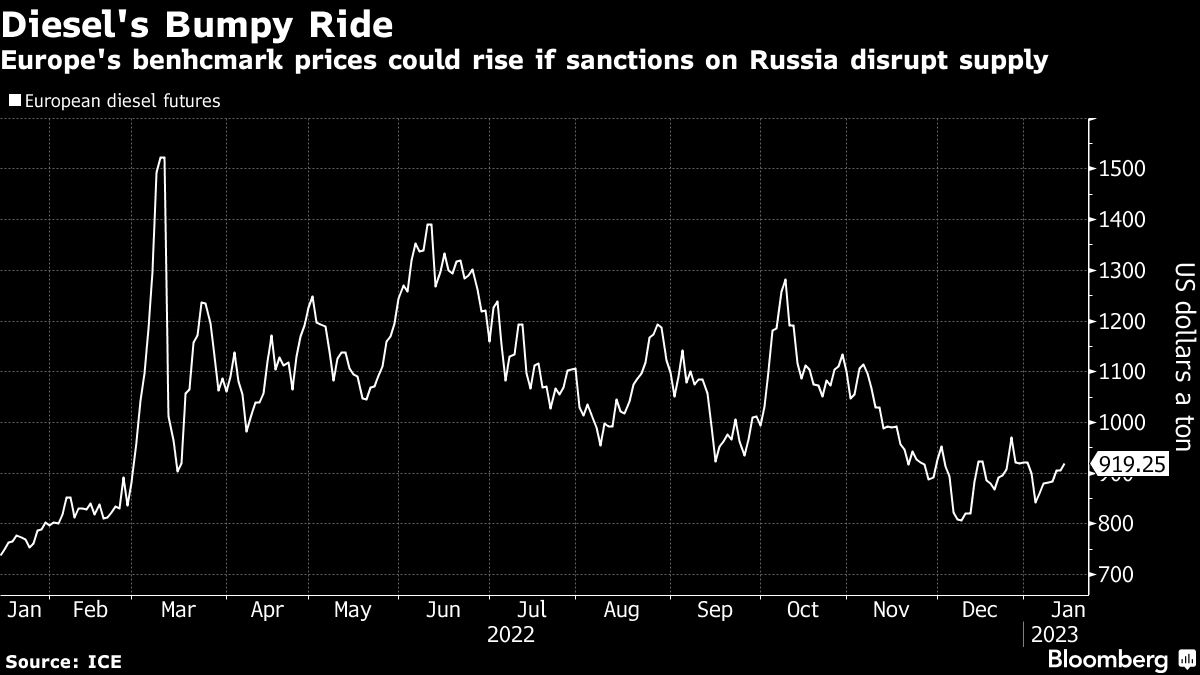 The European Union will have to replace about 600,000 barrels a day of diesel imports, and Russia will need to find new buyers for those supplies, store the fuel on ships, or cut production at its refineries.

Shipments into the EU from the U.S. and India have already been on the rise as they produce more than they consume, allowing them to export their surfeit. China is also expected to send more of the fuel into its nearby markets, indirectly pushing cargoes from other suppliers toward Europe.

“Product flows from net-long regions will intensify as the continent’s embargo on Russian products takes effect February 5th, which we see compounding a tight diesel situation,” Bernstein analysts including Oswald Clint wrote in a note to clients.

India’s role in supplying Europe is notable because it has become one of the biggest buyers of discounted Russian crude since the war broke out.

A big increase in Indian diesel flows would all-but guarantee that Russian crude was being purchased and refined into diesel in India before being sold back to Europe.
Such a trade wouldn’t breach the EU’s rules, but it highlights the inefficiency inherent in the sanctions. Essentially, hydrocarbons will be transported thousands of miles further than would normally be the case — and then back again.

There’s also the potential for murkier practices, such as re-documenting cargoes, or sending fuel to refined products storage hubs in other regions to for blending with non-Russian products.

So far this winter, the worst predictions of oil scarcity have been averted. Diesel, which months ago was the epicenter of oil-market strength, has softened thanks to unseasonably warm weather and an influx into Europe.

Crude prices slid after sanctions on Russia appeared to reroute exports, rather than cut them.
Among Moscow’s new — or bigger — buyers will be traders in Africa, Latin America and possibly Asia. Europe meanwhile will likely turn to the Middle East, where giant new refineries are ramping up operations.

Still, consultant Energy Aspects Ltd. said earlier in January that Russia will only be able to find a home for about a third of its diesel exports and that the rest will have to be shut in.

“The products embargo is the tricky one because Russia has really struggled to place its diesel anywhere else other than Europe,” Amrita Sen, the consultant’s chief oil analyst said at the Global UAE Energy Forum organized online by Dubai-based Gulf Intelligence.

That’s in the context of a European refining industry that’s getting ready for a seasonal round of maintenance work, and also facing disruption.

A threat of renewed strikes in France could shut down some of the nation’s fuel makers a day after the sanctions on Russia come into effect.

Two oil refineries in eastern Germany — previously supplied with piped Russian crude — are having to make less fuel than they normally would because those flows have halted.

And lying quietly behind all of that, is a host of logistical and technical issues that could flare up at any moment.

Markets for war insurance for ships calling at Russia remain in crisis after key reinsurers withdrew some of their cover, while oil tanker costs have already spiked once in the run up to the implementation of crude sanctions.

For now, there’s little immediate sign of panic in oil markets. The key question in the coming weeks is whether enough heavy lifting can be done to transform the world’s diesel flows.

“The market will always solve it,” said Eugene Lindell head of refined products at consultant FGE. “It’s just how much pain is it going to incur?”