The 2020 Supply Chain: What Does the Future Hold?

Every January since 2007, CEOs have gathered at the annual BGSA Supply Chain Conference to discuss the state of logistics, transportation and supply-chain technology. This event provides unique insight into the state of CEOs’ minds. What did we learn this year? A good place to start is the data.

Last year was terrific for supply-chain public markets. In aggregate, the BGSA Supply Chain Index, which tracks nine segments and 63 companies in all areas of the sector, increased 26% in 2019. In addition, all nine segments produced a positive return. 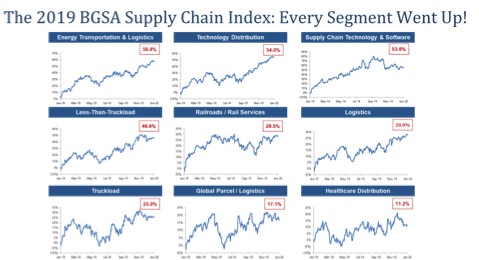 That said, the spread between winners and losers was significant.

Certain niche categories, like energy transportation, technology distribution and supply chain software, spiked 57%, 54%, and 47%. They were led by World Fuel Services (up 103%, accelerated by the UVAir fuel acquisition), Tech Data (up 76%), and Manhattan Associates (up 88%).

On the other hand, the freight recession punished the truckload sector, which experienced record bankruptcies, including NEMF and Celadon. The category still performed well, generating a 26% return, led by PAM and Knight-Swift (up 46% and 43%). Yet the aggregate number masks a 30% drop from February to June, and a recovery in the second half of the year, as the market looks forward to a brighter 2020.

Similarly, the parcel sector shows an aggregate performance of 17%. FedEx grew 16% from January-April, then dropped 20%, largely due to the “conscious uncoupling” with Amazon.

The gaps between individual winners and losers is striking, as noted below. 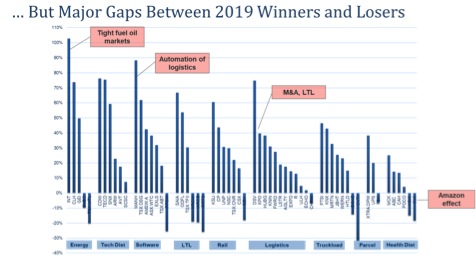 So how do we view the supply-chain market as we look at 2020?

On the one hand, many analysts note clouds on the horizon. They include:

Despite these clouds, we are optimistic about 2020. Why?

First, we believe the growth in ecommerce is generating ripple effects that drive growth in several key areas of the supply chain. E-commerce grew by nearly 20% in 2020, exceeding $600 billion in run-rate revenue. Winners include micro warehouses, ecommerce fulfillment companies, last mile providers, and reverse logistics, as outlined below. 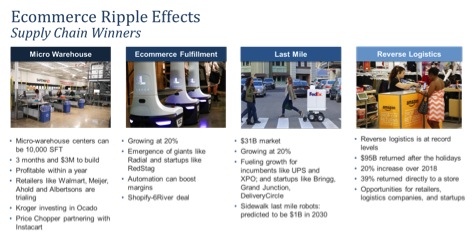 Second, several niche sectors are able to thrive amidst these competitive markets. A good example is cold storage. How did a slow-growth giant, Americold, come to be valued at 27x EBITDA? And how did a 2008 startup, Lineage Logistics, grow to become the world’s largest refrigerated warehouse company, with 2 billion cubic feet? In the case of Americold, the market has come to view it as a recession hedge, given its real estate ownership and exposure to the cycle-resistant food sector. In the case of Lineage, a string of acquisitions including Emergent Cold ($900 million) and Preferred Freezer (over $1 billion) have valued it to the top. Together, Lineage and Americold now control 63% of the cold-chain market.

Fourth, the capital markets continue to support the supply chain. Today, we count 53 unicorns in the global logistics technology ecosystem, including Didi Chuxing, Grab, DoorDash, Rivian, Flexport, Convoy, Uber, and many others. If $30 billion was poured into supply-chain technology in the 2010s, we believe another $60 billion will be deployed in the 2020s.

That said, we see a smaller number of winners capturing a larger share of the capital available. For example, in the maritime technology arena, 2019 was a record year for capital invested. Venture funding increased from $190 million to $1.144 billion. Yet over 90% of that capital was deployed in the $1 billion Softbank investment in Flexport. If you exclude that deal, total funding actually declined 24%, to $144 million. Similarly, we expect the 2020s to be a decade when capital shifts from early-stage innovation bets to later-stage scale plays.

In sum, the supply-chain market may be exceptionally competitive, but it is also full of more opportunities than ever before.

The outlook for supply-chain companies remains bright. Indeed, 60% of the CEOs surveyed at the BGSA Supply Chain conference anticipate growing more than 10% this year. While 2020 may be a year full of uncertainty, it remains full of opportunity for many of the firms in our sector.

We look forward to a rousing decade of growth in the 2020s!

Benjamin Gordon is CEO of Cambridge Capital, an investor in logistics and technology companies.