Home » China’s Curing Cancer Faster and Cheaper Than Anywhere Else

China’s Curing Cancer Faster and Cheaper Than Anywhere Else

Zhang Haitao was a basketball-loving teenager who dreamed of going to a specialized sports high school when he got a pain in his right arm that just wouldn’t go away. It turned out to be acute lymphoblastic leukemia.

The discovery set Zhang and his family, from a village deep in the mountains of southwestern China's Sichuan province, on a journey familiar to most cancer patients — a revolving door of hospital visits, blood tests and three rounds of chemotherapy. It was then that Zhang’s doctor suggested a last-ditch option: an experimental gene therapy being trialed by a Chinese startup called Gracell Biotechnology Ltd.

After spending three weeks in the hospital in May — during which white blood cells were removed from his body, genetically engineered, and then infused back in — an analysis of Zhang’s bone marrow in June showed his body was clear of cancer. 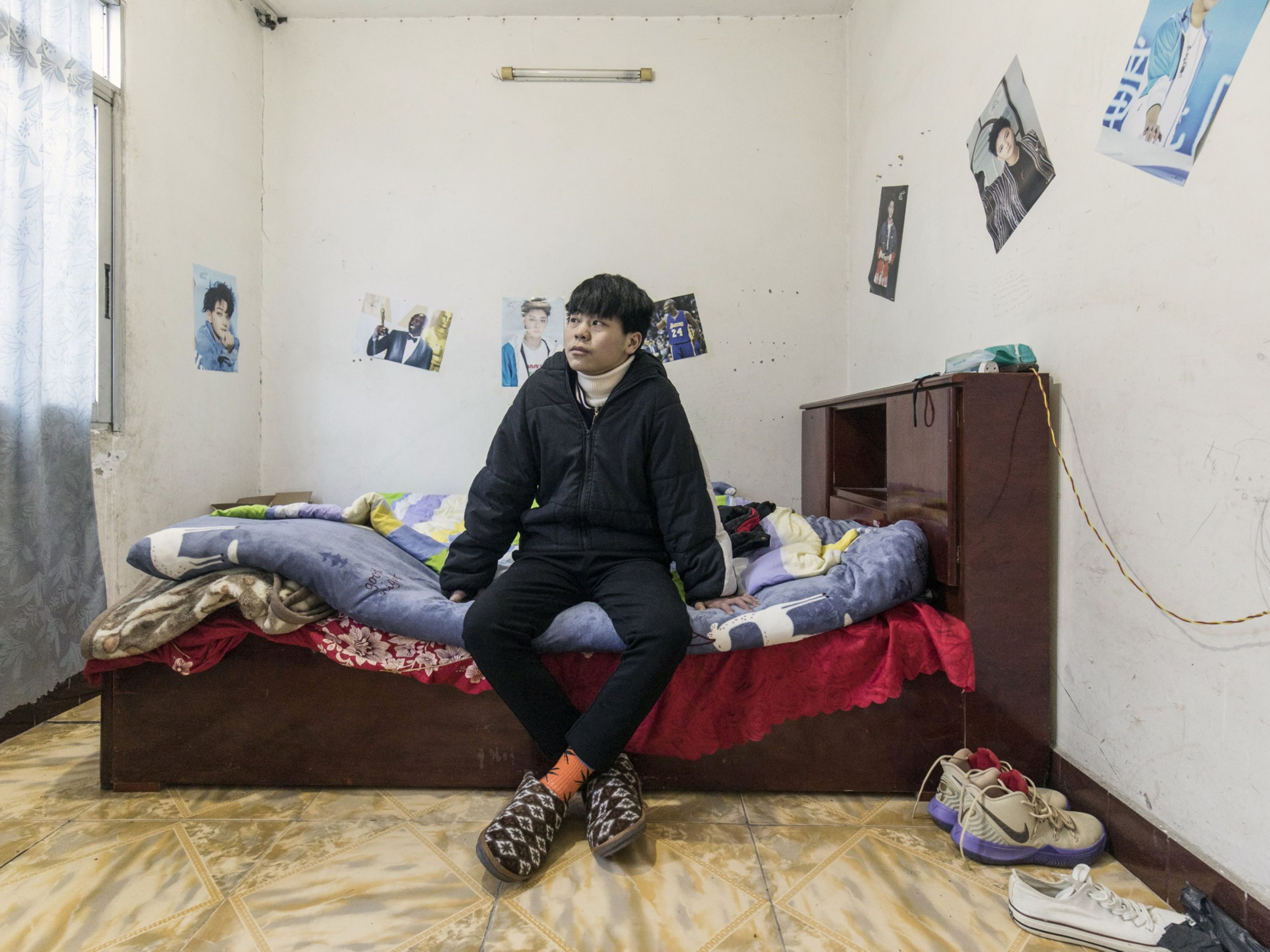 Seven months later, monthly medical tests conducted at a hospital in the nearby Chinese metropolis of Chongqing show he remains cancer free.

“I don’t remember much about the treatment as I had a fever throughout,” said Zhang, who’s now almost 16 and spends his days playing video games and texting his friends. “It seems like a new solution that will give people hope.”

The therapy Zhang received was Chimeric Antigen Receptor-T cells, known as CAR-T, and it’s being hailed as one of the most exciting developments in the quest to cure cancer. First developed by Israeli scientist Zelig Eshhar in the 1980s, CAR-T re-works the genes of the body’s own immune cells so that they actively seek out and destroy cancer cells. While it’s been embraced by researchers and drugmakers around the world, perhaps nowhere is CAR-T having more impact — and being pushed dangerously close to its limits — than in China, home to the world’s biggest cancer population and some of the most ambitious experiments.

CAR-T works by supercharging T-cells, the body’s main line of defense against disease, so that they latch onto and destroy cancer. In clinical trials, leukemia patients who failed to respond to other therapies have shown remission rates of over 90% within two months of treatment.

Though drug giants Novartis AG and Gilead Sciences Inc. have been marketing CAR-T globally since 2017, it’s expensive. The process of engineering an individual’s cells in a laboratory and then replicating them has also meant that some patients with more aggressive cancers can die waiting for treatment.

That’s where Gracell’s therapy was revolutionary. Instead of the two to three weeks taken by current treatments from American and European drug makers, the Shanghai-based company — set up by a group of veteran Chinese cell-therapy researchers — is churning out cancer-killing immune cells overnight.

And they’re doing it much cheaper in some cases than global pharmaceutical giants. Gracell has developed a process using genetic engineering that speeds up the cell production stage, according to founder William Cao Wei. Gracell plans to price its CAR-T treatment for about 500,000 yuan ($71,000), well below the $475,000 price tag for Novartis’ Kymriah, the Swiss company’s CAR-T therapy used to treat the type of blood cancer that Zhang had. A similar treatment from Gilead, based in Foster City, California, costs $373,000. 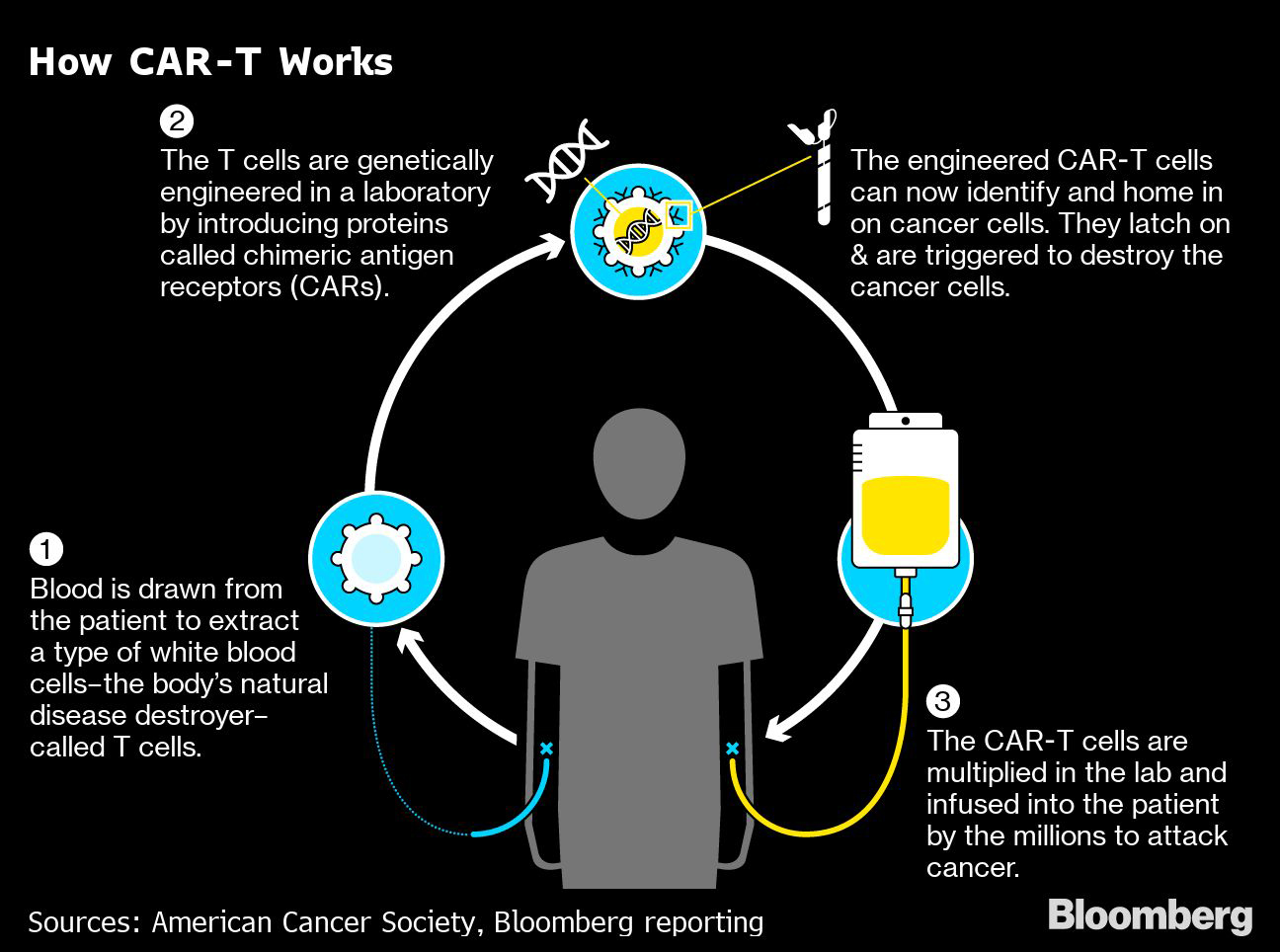 The aging population and a raft of lifestyle factors mean that more new cancer patients are emerging in China than anyplace else in the world, giving the country a significant stake in the global fight to find a cure. Emboldened by the government’s push to become a scientific superpower and to dominate the field of genetics, Gracell and other Chinese biotech startups are racing ahead, with China likely to approve CAR-T for widespread use as early as next year. Up for grabs is a market for cancer drugs and experimental treatments that has exploded to $133 billion a year worldwide, according to life sciences researcher Iqvia Institute.

“There can be both cooperation and competition between us and CAR-T developers in developed markets,” said Cao, who is also Gracell’s chief executive officer. “But there will definitely be competition.”

That drive to forge ahead — and in front — can be seen in the way China is approaching regulation of CAR-T. The country is weighing new rules that would loosen oversight of the revolutionary technology, allowing academic ethics committees within hospitals to approve new CAR-T treatments and then administer them to patients for a fee.

That would markedly loosen China’s current framework, which is presently in line with the approach taken by regulatory bodies like the U.S Food and Drug Administration and the European Medicines Agency. These entities are the sole authorities in their jurisdictions that evaluate and approve all CAR-T therapies before they are cleared for public use.

There is concern among researchers, regulatory experts and drugmakers themselves that allowing hospitals to market treatments for a fee could cause profit-making to trump ethical considerations. In a 2016 case widely reported in the Chinese media, a 22-year-old college student with a rare type of tissue cancer called synovial sarcoma died after going through an experimental cell therapy at a Beijing hospital.

“Hospitals can become both players and referees at the same time”

Before his death, the patient posted an essay online claiming the hospital had falsely advertised the treatment’s effectiveness, and that Chinese search engine Baidu Inc. had displayed the hospital’s advertising so that it appeared like a credible search result rather than a paid commercial. The essay went viral and sparked an outcry on Chinese social media over the ethics of private hospitals and the regulation of therapies for serious illnesses.

Censured by the Cyberspace Administration of China, Baidu responded by restricting the number of sponsored posts to 30% of a results page, and established a 1 billion yuan fund to fight fraud. The hospital did not respond to requests for comment.

It’s not the only death allegedly linked to genetic cell therapy in China. Last year, a hospital in the eastern city of Xuzhou was sued over the death of a lymphoma patient who died after receiving a CAR-T treatment. The patient developed severe side effects, including bleeding within the abdomen. The patient’s family argued that the treatment led to his death, but the hospital and doctor said it was the result of late-stage cancer. A court is yet to rule on the case.

China’s proposed new framework is reminiscent of its wider approach to the regulation of science, an area President Xi Jinping has prioritized as part of his ambition to cement the country as a world power.

The research of He Jiankui, an American-educated Chinese scientist whose revelation last year that he’d edited the genes of twin baby girls ignited a global firestorm, was signed off by the ethics committee of a Shenzhen hospital. The experiment, which He claimed made the twins immune to HIV, wasn’t backed by peer-reviewed data and still hasn’t been verified. Scientists around the world have condemned it as an irresponsible use of a technology that has the capacity to alter the very building blocks of life. The long-term effects of Crispr, the gene-snipping tool used by He and embraced by Chinese researchers, are also yet to be fully understood.

China’s new draft rules on CAR-T could give rise to the same scenario, critics say.

There’s no guarantee that the hospital committees have the qualifications to evaluate such a complicated therapy, said Tao Xin, a Washington, D.C.-based lawyer at Hogan Lovells LLP who specializes in the health-care regulatory law of both the U.S. and China.

“The proposal indicates that hospitals can charge a fee for the therapy, in addition to approving its own therapy,” he said. “With these two combined, are we going to see a replay of the 2016 incident? If there’s money to be made and I get to decide whether to do it or not, that’s really controversial.”

Gracell’s Cao is also critical of the new framework as it removes the role of an independent entity that evaluates the therapy’s safety and efficacy: “Hospitals can become both players and referees at the same time.”

Novartis and Gilead declined to comment on China’s regulatory plans, while a spokesman for the National Health Commission, the body in charge of governing the country’s health sector, said that the proposed new rules are still under discussion.

Meanwhile, Chinese companies are racing ahead on CAR-T and attracting hundreds of millions of dollars from investors like Singapore’s sovereign wealth fund Temasek Holdings Pte Ltd, as well as global pharmaceutical giants. Venture capital investment in Chinese biotech firms climbed to $17.6 billion last year, quadruple the amount from 2015, according to consultancy ChinaBio LLC.

Gracell — which counts Temasek and Lilly Asia Ventures, the venture capital firm spun off from Eli Lilly & Co. as investors — says 32 of the 35 patients it’s enrolled in its China-based trials over the past year have gone into complete remission “with minimal residual disease tested negative” four weeks after the CAR-T infusion — a clinical term that basically means there was no evidence of disease remaining in their bodies, the highest possible efficacy level for a therapy.

In 2018, Novartis paid $40 million for a 9% stake in Shanghai-based Cellular Biomedicine, and will use their cell therapy facility to manufacture its Kymriah treatment, which is currently being assessed for approval by China’s drug regulator. The startup is also developing its own CAR-T therapies and testing their potential against solid tumors, not just blood cancers. Chief Executive Officer Tony Liu Bizuo said Cellular Biomedicine’s digitized and automated process cuts the cell engineering time from four weeks to less than 10 days.

Cellular Biomedicine is now mulling building a bigger cell production facility with the Shanghai government, as demand for cell therapy grows and on expectations more commercial CAR-T treatments will be approved in China in the coming years. In a sign of the support startups are getting from the authorities, the city’s government has earmarked a 4 million square feet space for cell therapy research. Of the 21 cell therapies currently in clinical trials approved by China’s drug regulator, 11 are being conducted in the lab, which is fast becoming the nation’s CAR-T Ground Zero.

The next frontier is to make CAR-T as accessible as any other drug, and Chinese startups are at the leading edge. Dubbed “universal CAR-T,” this involves finding a way to take T-cells from healthy people and engineering them so that they can be infused into any cancer patient. Gracell is studying the use of donor white blood cells, marking a step toward that goal. Other startups like French company Cellectis SA are also racing to make universal CAR-T a reality.

“I’m very impressed with the pace of technological progress in China and the expansion of CAR-T research coming so rapidly,” said Bruce Levine, a professor specializing in cancer gene therapy at the Perelman School of Medicine at the University of Pennsylvania.

“We all want these therapies to move fast and some are very good, but we need to be aware that some could be moving too fast for their expertise, even if they have very good intentions,“ he said.

After a year in and out of hospital, Zhang, the teenage cancer patient in Chongqing, is starting to make plans for the future. If it wasn’t for the leukemia, he’d be in his first year of high school now.

“I don’t think I can go to sports school anymore, but I hope to learn a professional skill,” said Zhang, who’s now a foot taller than his aunt, Chen Chunhua, his primary caregiver. “I want to grasp this chance I have.”

While China’s approach to CAR-T may be criticized as moving too fast, Chen, who left her job at a ceramics factory to care for Zhang when he got sick, is thankful he had access to the treatment, which wouldn’t have been possible in China had the boy fallen ill just a year earlier.

“I’m so happy we had this option within China,” she said. “It really helps to lessen our burden.”