Online Sales Ignite in Corners of World Late to the Revolution

Years from now when the pandemic’s impact on global business is analyzed, it’s likely that the most lucrative change will be how it pushed — or actually shoved — massive markets into the modern e-commerce era.

In many countries, online shopping hadn’t been easy because of underdeveloped infrastructure and the reluctance, or inability, of consumers to use banks and electronic payment. That stalled growth in a lot of the world, but COVID-19’s disruption has forced rapid change.

Take Mexico, where fewer than half of adults have bank accounts and less than 5% of retail sales occurred online before the pandemic — a third of the global average. The lack of access to banking and mistrust of the financial system left it out of the online boom happening in Europe, China and the U.S. But when stores closed to slow COVID-19, millions of holdouts moved to the web. Mexican companies responded on the fly — igniting a 54% jump in web sales — and accelerated the online ecosystem by years. This kind of upheaval also took place in other major economies, like India, Russia and Brazil, that were slow to e-commerce.

One of those new online shoppers is Miriam Sota, a 39-year-old from Mexico City. She’d been extra careful with personal data after her credit card details were stolen and used to run up a hefty bill. The fear of handing over her financial details kept her off the web until COVID-19 hit. That’s when she needed a filter for her refrigerator and as a last resort went online where she found one on Amazon. Now she’s a convert, even buying groceries online — thanks largely to new services that allow cash for web orders.

"I had never bought anything online before the pandemic," Sota said. "I've always been very distrustful.” 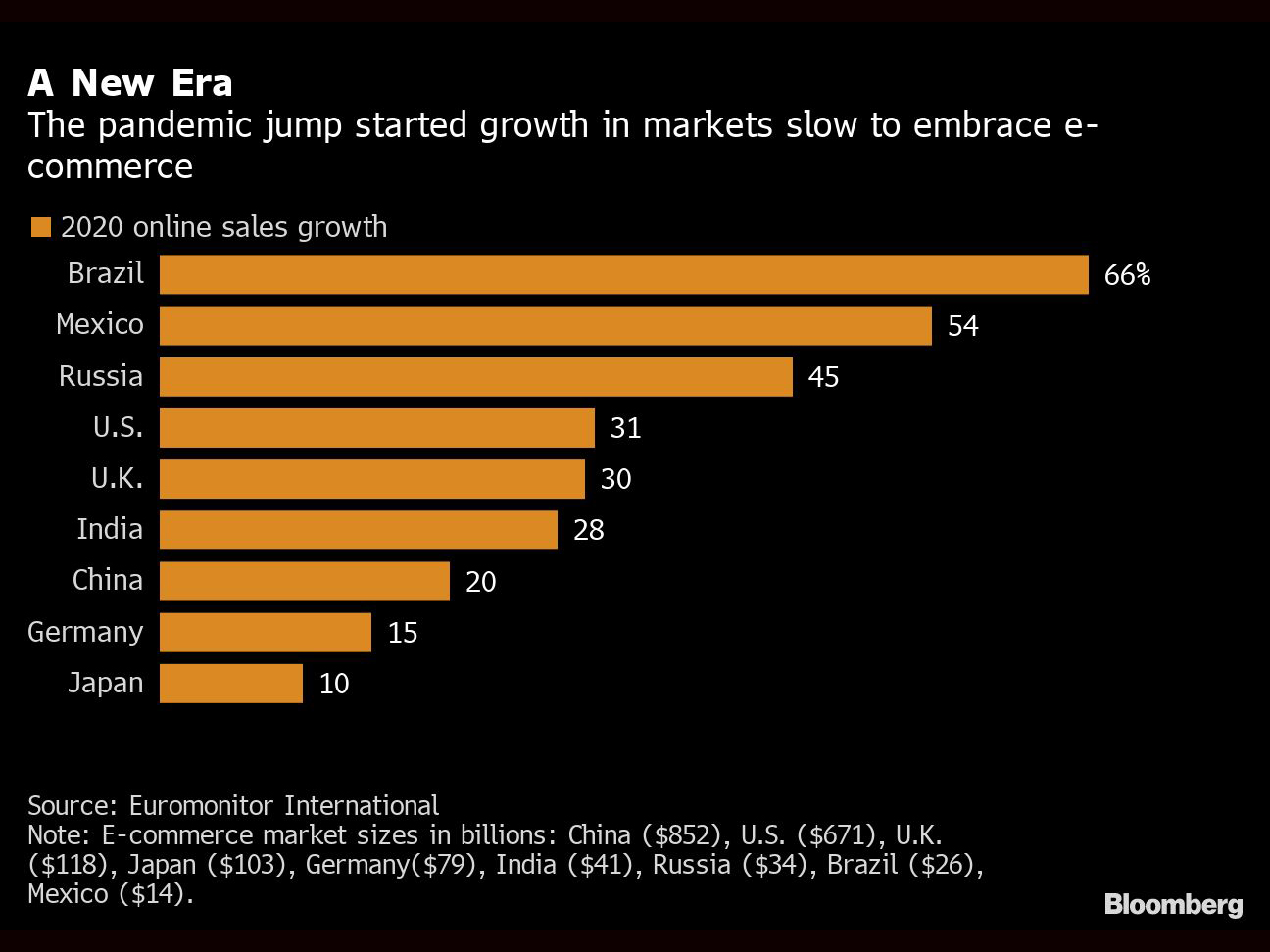 COVID-19 has accelerated the shift to e-commerce everywhere, but it has the potential to be much more lucrative in countries where many more people are developing the online habit for the first time. In India, for example, e-commerce made up just 6.5% of the market last year, less than a quarter of China’s rate. And some of these markets are more fragmented and up for grabs because there are fewer dominant companies.

To keep up, retailers in these markets are catching up to global peers by creating more secure payment systems, expanding distribution to speed delivery and expanding customer service to platforms like Facebook and WhatsApp. MercadoLibre, Latin America’s largest e-commerce retailer, went as far as using its own planes to lower shipping times as online sales surged across the region.

Within Walmart Inc., the world’s largest retailer, its Mexico unit tripled online revenue in the third quarter, dwarfing a 79% gain at the U.S. division. At Home Depot Mexico, e-commerce growth has topped its U.S. parent. Website traffic more than doubled, with 70% of its online customers being new.

“I have seen an evolution” with people setting aside their fears about e-commerce, said Erika Diaz, vice president of online, marketing and special services for Home Depot’s Mexico division. To ease the transition, the company now allows customers to buy items on the web and then pay for them at a store, including with cash. It also doubled online customer service representatives and expanded online chat features. “We adapted our business to the new normal.”

Russia had been fertile ground for an e-commerce boom for years, with almost as many internet users as the U.K. and Germany combined, according to Euromonitor International. But both those countries each have online markets more than twice as big because, just like in Mexico, a preference for cash and an underdeveloped distribution network stymied growth.

But COVID-19 has quickly changed Russia. Established companies, like closely-held Wildberries and Yandex NV, and startups are flooding the market with investments as the pandemic has brought an estimated 10 million Russian consumers online for the first time, according to Data Insight. Companies have increased offerings, like online grocery, and brought faster delivery times. All that helped boost online sales 45% last year when its overall retail market shrank, according to Euromonitor. In a sign of the frenzy, e-commerce operator Ozon Holding PLC went public in late November and the stock has already surged more than 40%.

“The pandemic is considered to be a turning point in e-commerce development,” as Russian companies offer more secure payment systems and quicker fulfilment, said Marija Milasevic, a consultant at Euromonitor. “Russia still has huge potential for growth.”

In Brazil, online sales surged 66% in 2020 — more than twice the rate in the U.S., according to Euromonitor. In response, traditional retailers, like Via Varejo and Magazine Luiza, are using messaging platforms such as WhatsApp to offer promotions and finalize transactions, according to research by Goldman Sachs. Chains are also testing live streaming to sell goods and beginning to ship online orders from stores — a common practice in other markets.

India has been an even bigger prize, given it has more than 1 billion people and the third-largest retail market in the world — only trailing the U.S. and China. The hurdles there are even greater with only about half of households connected to the internet. The country’s online market is now forecast to almost triple to about $100 billion by 2024, driven by grocery orders and the push by industrial giant Reliant Industries Ltd. — the country’s largest company — into technology and e-commerce, according to Goldman.

In Mexico, the government had been laying the groundwork for a shift away from cash by building an infrastructure for electronic payment systems. That likely helped when stores went dark. So has making it easy to use cash online. Retailers like Amazon now sell prepaid cards in convenience stores that can be used to shop on the web.

“This was an important barrier for e-commerce in Mexico,” said Daniela Orozco, who heads research for the Mexican Association of Online Sales, or AMVO. “Barely two years ago, you could only make a purchase online with a credit card.”

The online migration has been “a silver lining,” of the COVID-19 era, said Patricia Canavan, senior vice president of international and retail operations at Authentic Brands Group, which bought the Forever 21 brand last year that has stores in Mexico. One step it’s taken is working with local partners to speed up delivery by using warehouses closer to densely populated areas.

Of course, e-commerce growth also can narrow profit margins because it means retailers need to spend more on shipping and building out distribution networks. And shoppers have proven to make fewer impulse purchases online than in stores, which means missing out on some sales.

“The growth of our Mexican business has been remarkable,” MercadoLibre Chief Financial Officer Pedro Arnt said in a November earnings call. And there is a “large opportunity that still lies ahead.”