The European Union rolled out a climate plan that will transform every corner of its economy — from how people heat their home to the cars they drive — as the bloc uses a massive overhaul of rules to position itself as a global leader on the environment.

Every industry will be forced to accelerate its shift away from fossil fuels in order to cut pollution by at least 55% from 1990 levels by 2030, according to proposals unveiled in Brussels on Wednesday. It puts the EU on a path to eliminate greenhouse gas emissions by mid-century, expanding the world’s largest carbon market, axing new combustion-engine cars by 2035, and putting a levy on some imports from countries with laxer environmental standards — a move that could stoke trade tensions.

It’s the most ambitious multilateral climate strategy ever attempted and would propel the EU far ahead of other major economies with net-zero goals including major emitters the U.S. and China.

“We’re not just faced with an industrial revolution, we’re also faced with an existential threat which is the climate crisis,” European Commission executive vice president and climate chief Frans Timmermans said at a news briefing. “So you don’t have the luxury to say let’s very smoothly develop toward this change. We have to do it quite radically.”

It’s unlikely the package will be implemented exactly as envisioned: Wednesday’s proposals kick off years of political wrangling with member states over how to turn the measures into law. There are already signs of discontent, and Timmermans acknowledged it would be “bloody hard.” Making the transition a fair one will be a key challenge and the EU has earmarked 72 billion euros ($85.1 billion) to help compensate those who lose out.

“We’re going to see an economy-wide experiment to put climate ambition into action,” said Simone Tagliapietra, a researcher at the Bruegel think tank in Brussels. “So far Europe has focused on a couple of sectors to cut emissions and now we’re really changing gear. Those measures will have a huge impact on the daily lives of families and businesses across Europe, with no exemptions.”

The EU’s goals call for about 1.2 trillion euros of clean energy investment to 2030, according to Bloomberg NEF.

The EU’s 27 nations have together cut emissions 24% between 1990 and 2019, largely driven by limits on pollution imposed by the Emissions Trading System. But the pace of cuts will need to be stepped up to avoid catastrophic global warming. The EU’s 55% goal is still rated “insufficient” by Carbon Action Tracker. The nonprofit estimates that it has to cut emissions 65% by 2030 to meet the Paris Agreement’s aspirations. 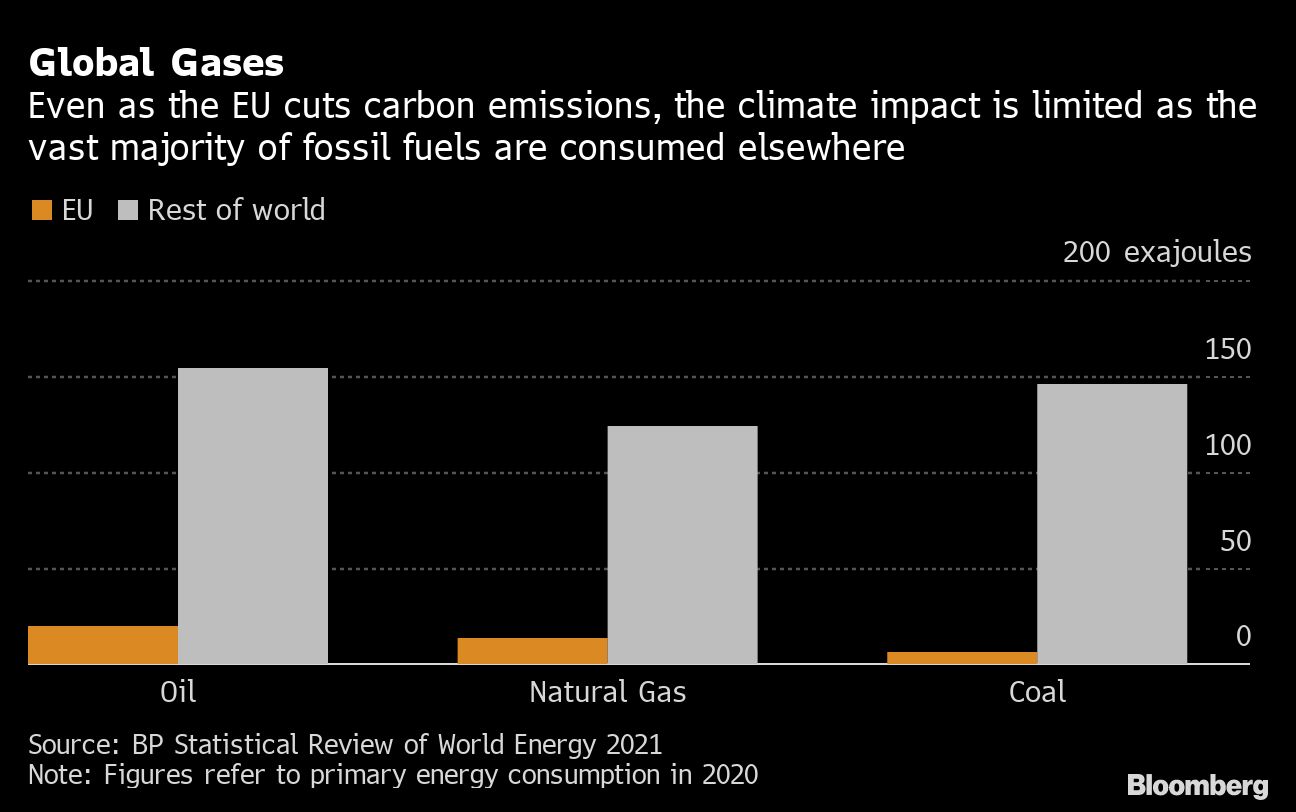 Still, the package, dubbed Fit for 55, goes further than any other government in working out exactly what needs to be done to pivot sharply away from fossil fuels. Its strategy could serve as a roadmap for others to decarbonize more quickly.

“We’re at a stage where about 75% of global gross domestic product is covered by climate neutrality or pledges,” said Manon Dufour, who heads the Brussels office of climate think tank E3G. “But there’s absolutely no blueprint on how to do this, on how to transform an economy to meet these targets — that’s what the Commission is doing now.”

How the EU wrestles with the proposals will also be instructive for other policy makers seeking to enact similar policies, according to Laurence Tubiana, chief executive of the European Climate Foundation and a former French climate diplomat who had a key role in the talks on the Paris Agreement. “This will be the first attempt to make this real, to say it’s not only numbers — we commit to a set of very precise policies in a region where countries have different geographies, social systems and energy mixes,” she said.

One of the biggest sticking points is the expansion of carbon trading. The price of polluting in the existing cap-and-trade program for manufacturers and utilities has surged to records, leading to concerns that consumers will have to bear the cost.

The EU argues that the urgency of the climate crisis requires drastic action, and that residents will ultimately experience positive outcomes. “We have one decade to fundamentally change how we generate energy, move around and produce things we need,” said EU Energy Commissioner Kadri Simson. “There will be a direct impact on everybody’s life, from more electric vehicles on the roads to greener buildings, cleaner air and healthier environment.”

There will be funds to shield the most vulnerable households from higher costs, financed from the expanded carbon market.

Strengthening the carbon market is also set to become a divisive topic for member states with varying levels of wealth that rely on different energy sources. The rapid price increases in the current ETS have already led to complaints — mostly from eastern European countries — that the soaring costs will undermine their ability to invest in clean technologies.

One way to protect these local companies, the commission has suggested, is to impose a carbon price on some imported goods including steel and aluminum by introducing the world’s first carbon border levy. The tool would help level the playing field for European manufacturers so their rivals from countries with looser environmental rules can’t undermine them on price.

But companies want more help. Steel producers argue the levy should come on top of free permits to emit CO2, while the commission says it should be one or the other. The tax, called the Carbon Border Adjustment Mechanism, is also causing diplomatic unease with countries from China to Russia, who warn that it could violate World Trade Organization rules.

“The proposal today is just the first chapter of the story,” Tagliapietra said. “We will see a lot of friction and tension over the next two to three years. Europe is set to become a global laboratory for deep decarbonization and the world will have an opportunity to learn how to achieve climate targets.”