When Tokyo last hosted the Olympics, in 1964, the unveiling of a bullet train capable of the improbable speed of 210 kilometers an hour (130 mph) heralded the dawn of a high-tech era in Japan.

Within a decade and a half, innovations such as Sony Corp.’s videocassette recorder, Toshiba Corp. flash memory and Space Invaders, the arcade shoot-em up that revolutionized the gaming industry, made Japan synonymous with global technological superiority, and the talk was of it overtaking the U.S. as the world’s biggest economy.

As Tokyo again prepares to host the Games this week, Japan is in a technological funk. Its heyday of setting the pace in televisions, recording devices and computers is far behind it. While Japan can claim credit for the Walkman, Apple Inc. came up with the iPhone. More humiliating yet, regional rival South Korea and its tech giant Samsung Electronics Co. have overtaken Japan in smartphones and memory chips.

That’s not simply a blow to Japanese national pride; it’s a corporate dilemma and an economic liability just as a fourth wave of COVID-19 robs the country of Olympic spectators and the revenue they’d bring to help spur a rebound from the pandemic. In an increasingly polarized world where the U.S. and China are setting technology and data standards, Japan runs the risk of being left further behind.

Prime Minister Yoshihide Suga is fighting back, with plans to bolster the computer chip industry elevated to a national project on a par with securing food or energy. But executives and government officials in the industry say the solution will also require something else: A fundamental shift in the way Japan has conducted business for decades.

That means reducing red tape, recruiting foreign chipmaking talent and completely dropping “a stubborn insistence on Japan-centrism,” said Kazumi Nishikawa, a director at the IT division of the all-encompassing Ministry of Economy, Industry and Trade, known as METI.

“This made-in-Japan self-reliance approach didn’t work out,” he said. “We want to avoid that this time around.” 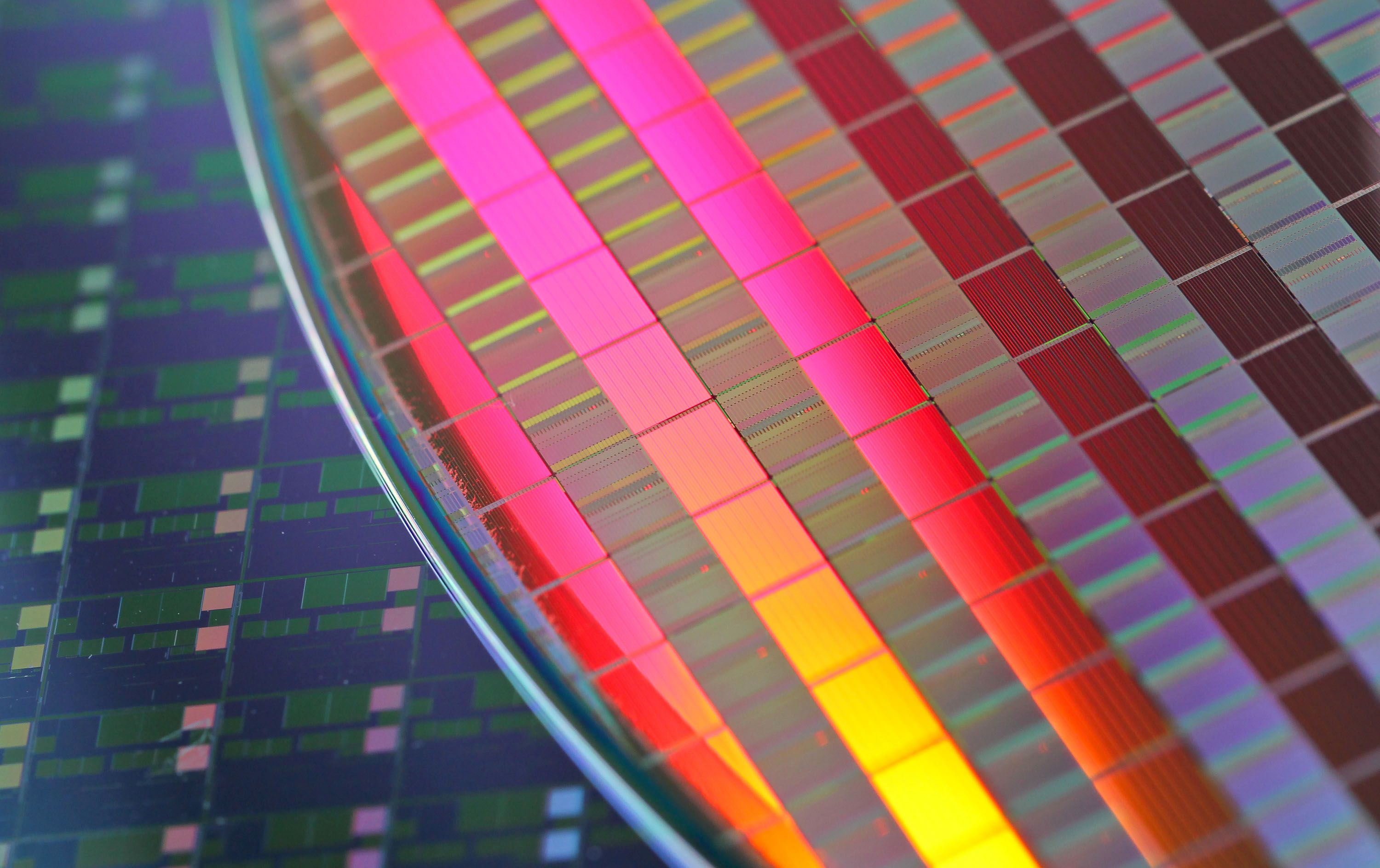 Japan may have taken a big step in that direction by enticing Taiwan Semiconductor Manufacturing Co. to help rebuild its once dominant chip industry. Last week, Chief Executive Officer C.C. Wei surprised observers when he said that TSMC was doing “due diligence” on a wafer fab, appearing to confirm long-running speculation over plans by the world’s leading advanced chipmaker to build a facility in Japan.

Japan, the world’s No. 3 economy after the U.S. and China, is budgeting for hundreds of billions of yen to plow into chips, but it’s a drop in the ocean compared to the kind of money being waved about in the U.S., where at least $52 billion (5.7 trillion yen) is being made available to support domestic semiconductor production. In South Korea, companies like Samsung and SK Hynix are pledging $450 billion over a decade, while TSMC alone is earmarking $100 billion over the next three years.

“Some countries are offering support on a different order of magnitude,” making it hard to compete, said Akira Amari, tax chief of the ruling Liberal Democratic Party and a former minister of state for economic and fiscal policy.

Still, he said, the prime minister is “extremely good” at getting things done and is now focused on digitalization and carbon neutrality, two issues linked by semiconductors.

Japan still boasts pockets of excellence in fields including robotics and supercomputing, while Japanese engineers have just shattered the world record for the fastest internet speed, according to a report last week on interestingengineering.com. In the White House supply chain review published in June, Japan is mentioned 85 times, just ahead of Taiwan and South Korea, and the same number of references as Europe.

Tetsuro Higashi, chairman emeritus at semiconductor equipment maker Tokyo Electron Ltd., said the task of addressing Japan’s decline is not as straightforward as rebuilding one industry. He cited Japan’s semiconductor strengths as Kioxia for memory and Sony’s image sensors, along with component and power-chip makers and chip manufacturing equipment, saying “the strategy has to connect those pieces and form a core.”

“There is a more fundamental sense of crisis,” Higashi, who heads an expert panel advising the government on its chip strategy, said in an interview. “The fear is that if this goes bad, the whole Japanese economy will suffer.”

Like all the world’s most advanced nations, Japan’s technological shortcomings were exposed by the pandemic. Its recognition in Washington belies a decline in technological influence for a variety of reasons, political, economic and cultural.

Take semiconductors, the present government focus: In 1990, Japan held some 50% of the global chip market; now it’s 6%, according to IC Insights. An analysis of scientific papers submitted to the main semiconductor conferences conducted by the Berlin-based think tank Stiftung Neue Verantwortung shows a precipitous decline in Japanese contributions over the past 25 years, to the extent that China overtook it last year. “Diminishing market shares seem to go hand-in-hand with decreasing R&D power,” SNV researchers Jan-Peter Kleinhans and Julia Hess write in their report, “Who is developing the chips of the future?”

In a devastating presentation to the lower house Science and Technology Committee last month, independent consultant Takashi Yunogami laid bare Japan’s failings. Japan used to manufacture memory for mainframe computers, where clients demanded high quality and a 25-year guarantee. But come the rise of personal computers, Japanese industry failed to respond, leaving Samsung to offer PC memory with a three-year guarantee at a fraction of the cost. In an increasingly disposable digital age, Japan suffered a “high quality disease.”

The industry’s troubles were compounded by a government response that favored the creation of domestic champions over foreign collaboration. In 1999, Tokyo encouraged the merger of Hitachi and NEC’s memory businesses under the name Elpida, the Greek for “hope.” In 2012 it filed for bankruptcy with liabilities of $5.5 billion, a victim of plunging prices. It was bought by Micron Technologies of the U.S.

“All sorts of things were tried to stop the downward trend — national projects, consortiums, joint ventures — all failed,” Yunogami told lawmakers. “The chip industry is beyond recovery.”

Like the other officials, however, he saw a ray of hope in terms of Japan’s share of the global market for chip equipment and raw materials, which translates into thousands of small companies making things like wafers and specialized liquids. The government’s best chance is to focus on those few successes and “make the strong stronger,” he said.

Government intervention in the chip industry helped build its dominance in the first place. Yet talk of government help today is poison to some in business, illustrating Suga’s difficulties in securing the support for a technological revival.

There’s another reason Japanese officials cite for the country’s relative decline that would sound familiar to Chinese observers: a trade war with the U.S. Some 40 years ago, spooked by Japan’s rise, the U.S. imposed a requirement to use a certain percentage of U.S. chips or face trade tariffs.

“America saw Japan’s emergence as a threat and pushed back,” said Amari, the ruling party’s tax chief. Yet Japan’s industry was also guilty of complacency, content to focus on the domestic market without venturing out into the world, he said, citing the downfall of Docomo, the first company to connect mobile phones to the internet. It lost out to Samsung and Apple.

Today, the national security issues related to technology mean the government faces “the kind of change that happens once in a hundred years.” That means it must embrace the challenge or fall behind, he said.

“Japan is good at taking things from zero to one, and not so much at taking them from one to 10,” he said. “Japan wins in technology and loses in business.”