A Biden administration effort to untangle global chip supply snarls is facing resistance from lawmakers and executives in Taiwan and South Korea, complicating attempts to resolve the bottlenecks hurting industries from automobiles to consumer electronics.

The U.S. Commerce Department late last month asked companies in the semiconductor supply chain to fill out questionnaires by Nov. 8 seeking information pertaining to the ongoing chip shortage. While the request is voluntary, Commerce Secretary Gina Raimondo has warned industry representatives that the White House might invoke the Defense Production Act or other tools to force their hands if they don’t respond.

The issue has become particularly thorny in Taiwan, home to Taiwan Semiconductor Manufacturing Co., which accounts for more than half the global contract chipmaking market. That dominance has already prompted rivals like Intel Corp. to call for more domestic investment and spurred governments in the U.S., EU, Japan and China to mull efforts to bolster their own chip industries to reduce their reliance on the world’s most advanced semiconductor manufacturing hub.

“TSMC absolutely will not hand over sensitive information, particularly client data,” Sylvia Fang, the company’s general counsel, told reporters on Wednesday. Three of TSMC’s top five customers are American, with the largest Apple Inc. accounting for a quarter of total sales. “TSMC is still assessing how to respond.”

Smaller peer United Microelectronics Corp. declined to comment on how it may respond to the U.S. query, though Chief Financial Officer Liu Chi-tung told Bloomberg News that the company will protect customers’ non-public information.

Meanwhile, South Korea’s Ministry of Trade, Industry and Energy on Wednesday released a statement expressing concern over the scope of the U.S. request. Other media including Korea Joongang Daily also cited unidentified people at local chipmakers as saying they may have a hard time complying with the requests.

The potential standoff comes as chip shortages are going from bad to worse. Lead times in the industry — the gap between putting in a semiconductor order and taking delivery — rose for the ninth month in a row to an average of 21.7 weeks in September, according to Susquehanna Financial Group. That is by far the longest since the firm began tracking the data in 2017. 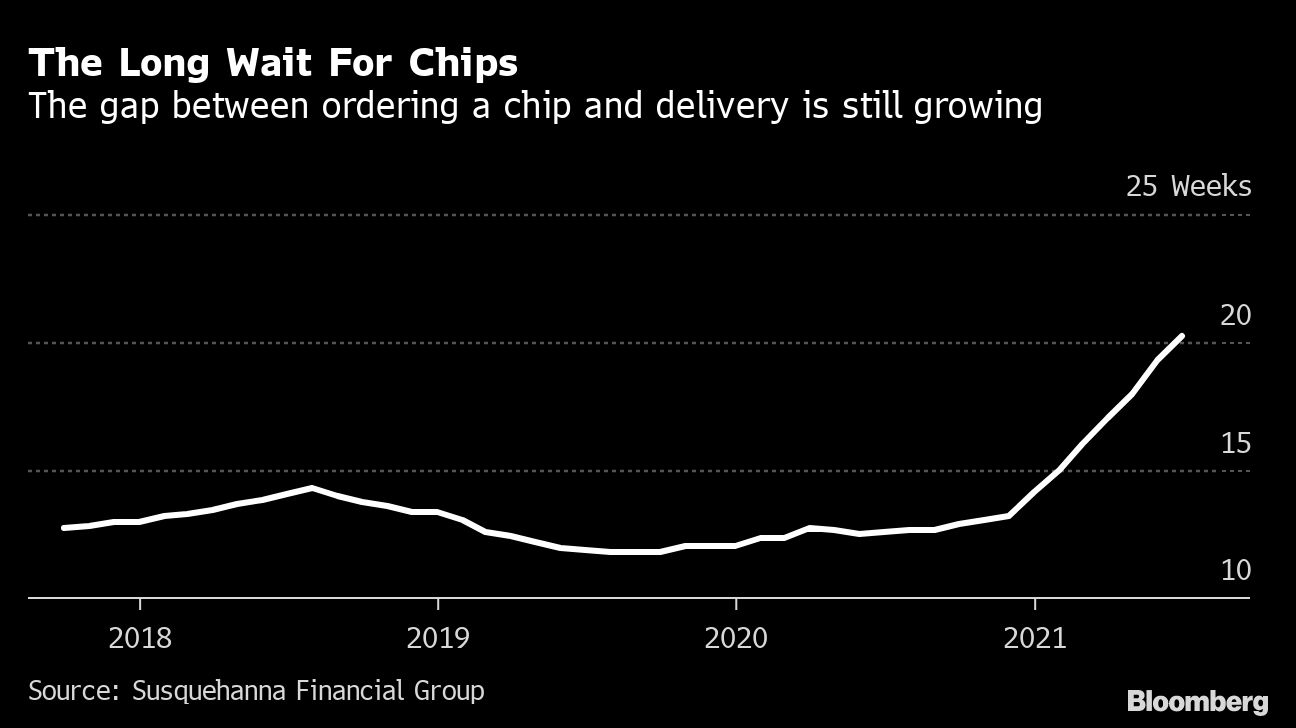 In the U.S. questionnaire, chipmakers were asked to comment on inventories, backlogs, delivery time, procurement practices and what they were doing to increase output. Commerce is also requesting information on each product’s top customers. But the department has come to realize that many are struggling with the questionnaire and it is preparing an FAQ to help companies respond, TSMC’s Fang said.

“If the U.S. is looking to resolve supply chain issues, we will see how we can best assist them,” Fang said. “We have done a lot to help, including increasing output of auto chips and prioritizing auto customers to a certain degree.”

The chip crunch is expected to cost global automakers $210 billion in sales this year. They will build 7.7 million fewer vehicles in 2021, according to the latest estimates from AlixPartners issued in September, almost double a previous forecast of 3.9 million.

The U.S. reach for chipmaker data has also run into resistance from Taiwanese politicians and shareholders. The island’s Ministry of Economic Affairs said on Oct. 2 the island’s chipmakers won’t provide information pertaining to “trade secrets” without consent from customers, offering its support as they communicate with clients and the White House. But that hasn’t quelled the protest from opposition lawmakers.

“Taiwan should not cave in automatically when it comes to dealing with the U.S.,” main opposition Kuomintang caucus whip Alex Fai was reported by local media as saying on Wednesday. “If we supply the U.S. with all the information it’s seeking, will TSMC still be competitive in the world in the future?”

Separately, an individual investor petitioned a district court in Taiwan earlier this week to prevent TSMC from handing over sensitive information including the names of its customers to foreign governments, according to Rachel Huang, a lawyer representing the person at Liu & Partners in Taipei.