Surging battery prices and shortages of metals and materials are likely to last for some time, Toyota Motor Corp.’s chief scientist warned, trends that could weigh on the world’s embrace of electric vehicles.

The shift to EVs over the past decade has been driven by steadily falling battery prices, a dynamic that’s enabled plug-in vehicles to travel longer at costs approaching those of gasoline-powered cars. Now, manufacturers are running low on supplies of lithium, nickel and other key battery inputs, with trade frictions and the war in Ukraine exacerbating issues and forcing prices higher.

It’s not just these gyrations, Gill Pratt said in a recent interview at the Toyota Research Institute in Los Altos, California. The question is whether the industry has “invested the right amounts in different parts of the supply chain to make this change so fast,” said Pratt, TRI’s founding chief executive officer.

Over the past few months, automakers pushing forward with aggressive plans for EV roll-outs have been sounding alarm bells about impending shortages and an unprecedented rise in the cost of materials used to manufacture batteries. Higher inputs have pushed carmakers from Tesla Inc. to BYD Co. to hike vehicle prices.

In some respects, “the world has thought about this in too simple of a way,” Pratt said of the industry’s rapid shift to EVs. Taking into account various automaker and energy sector timelines, “you do come up against hard limits,” he said.

“There’s going to be this crunch, not enough materials,” Pratt warned, adding that conditions are likely to remain “hard” in the near- and mid-term.

Pratt, a former Massachusetts Institute of Technology professor and well-known roboticist, was picked by Toyota President Akio Toyoda in 2016 to lead the Toyota Research Institute, a U.S.-based group working on automated driving, robotics and artificial intelligence. Pratt has also taken on the role of ambassador, communicating Toyota’s thinking and strategies to global audiences and relaying information back to headquarters in Japan.

On top of rising battery costs, new uncertainties are emerging over how quickly and widely EVs will spread. With the economies of the world’s two biggest automobile markets — the U.S. and China — under strain, there are signals that EVs, expensive already, may be drifting further out of reach for average consumers. 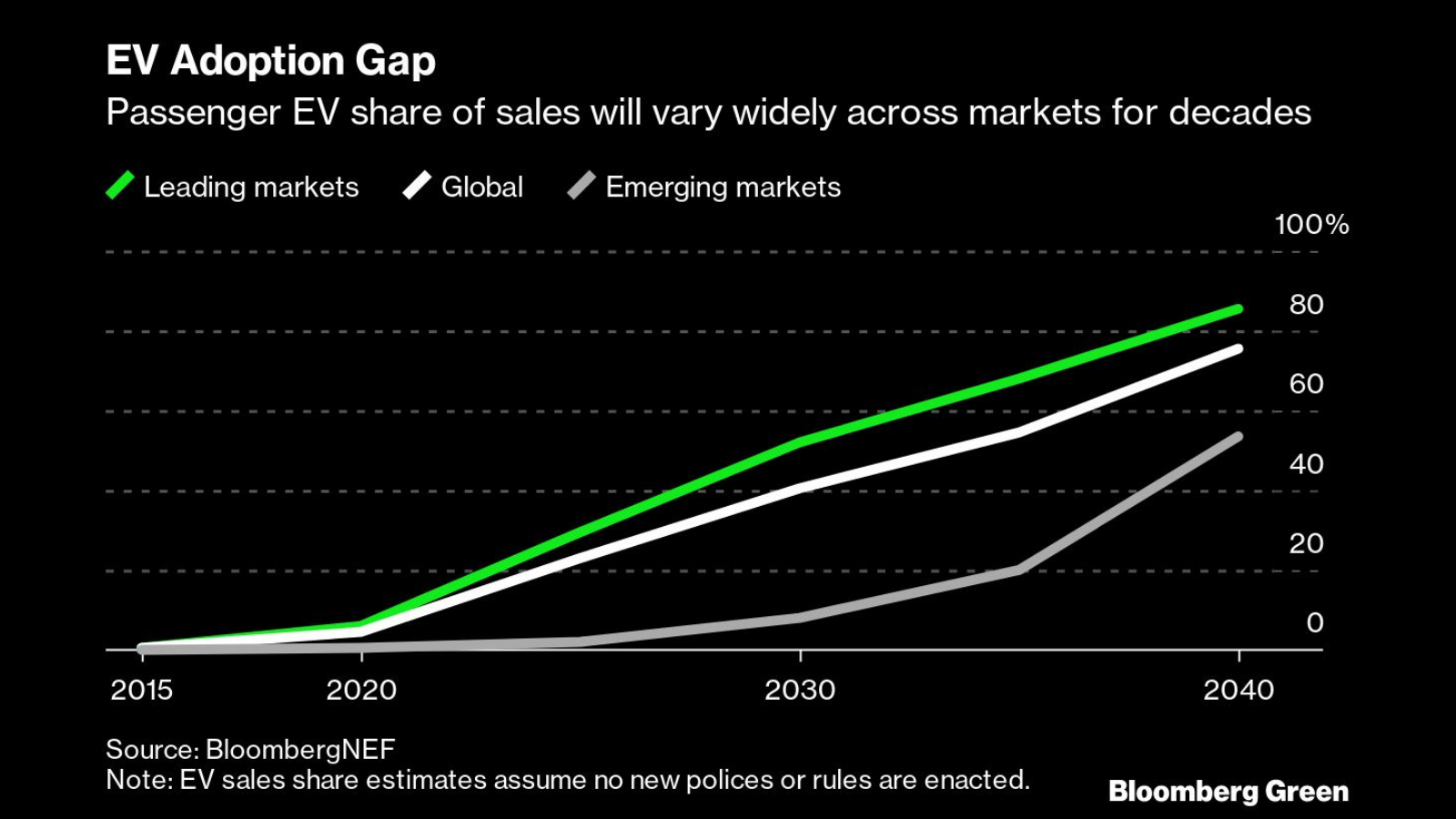 With gas prices surging globally, “we haven’t yet seen any broad slowdown in EV sales,” said Kota Yuzawa, head of Asia auto research at Goldman Sachs Group Inc. But “there is fear that this month EV prices might go up again,” he said.

For now, the base case for EV sales remains unchanged, but green inflation — a term for the sharp rise in energy transition-related prices — could put “negative downward pressure on EV penetration,” Yuzawa said.

According to data from Cox Automotive, the average transaction price for a new EV in the U.S. climbed to more than $65,000 in April, up 16% from a year earlier. That outpaced gains in total new vehicle prices over the same period and placed EVs squarely in the same price bracket as luxury cars.

Watch: How Can We Supercharge the EV Rollout?

Raw-material costs may yet drive prices higher. The International Energy Agency forecasts that, after more than a decade of declines, battery packs could become 15% more expensive this year. While a flood of new models are underpinning EV sales at the moment, “ensuring future growth will demand greater efforts to diversify battery manufacturing and critical mineral supplies to reduce the risks of bottlenecks and price rises,” according to a recent IEA report.

“That’s what I’m worried about the most,” Pratt said. “If prices go up, and the amount of money people have may not keep up.”

Even so, BloombergNEF’s 2022 EV outlook released Wednesday estimates that plug-in passenger vehicle sales will more than triple to 20.6 million in 2025, much higher than the 14 million it was forecasting just a year ago.

At the same time, BNEF warns that raw-material supply constraints are set to push back the point in time at which EVs reach price parity with combustion vehicles. There’s also a widening gap between wealthy and emerging economies’ EV adoption rates, suggesting the transition may “not be an equitable one,” according to the outlook.

While the industry builds out stable battery supply chains, a logical interim step is hybrid technology, according to Pratt. Hybrids are more efficient than traditional cars, though they still run on gasoline. They’re cheaper than all-electric models and are fitted with smaller batteries that require fewer raw materials.

Along with EVs, Toyota is continuing to invest heavily in hybrids, seeking to spread its bets and bide time as battery supply chains mature. The Japanese automaker’s relatively small number of pure-EV sales has fueled criticism that it’s been dragging its feet amid the EV revolution.

Stung by those critiques, Toyota unveiled a 4 trillion yen ($31.4 billion) investment in EVs in December to make clear that it’s serious about the shift, even if it has a different timeline and path in mind.

For now, Toyota’s strategy to move cautiously into EVs while wagering on hybrids appears to be paying off. Toyota overtook General Motors Co. in the last three months of 2021 as the No. 1 automobile seller in the U.S. and retained its crown in early 2022 as soaring gas prices pushed consumers to flock to hybrids as an affordable, more fuel-efficient option.

Toyota’s idea is to not “have perfect be the enemy of good,” Pratt said. That, he said, means giving consumers vehicles that produce less carbon emissions “but that they can afford.”