Industrial production edged down 0.1% from October, dragged lower by falls in output of conveyor belts, cranes and equipment for making chips and flat panel displays, according to the industry ministry December 28. Economists had forecast a 0.2% decline. Output also fell 1.3% from a year earlier, compared with analysts’ expectations of a 1.5% drop.

The continued weakness in output supports the Bank of Japan’s view that the economy’s fragile recovery is still in need of support. Japanese firms, especially manufacturers, are growing increasingly cautious over the outlook as uncertainty builds over the extent of a global slowdown and the possibility of recessions in key overseas markets.

Weakening demand from business partners is already visible in trade figures showing the biggest month-on-month fall in exports from Japan since the supply-chain snarls of 2021. 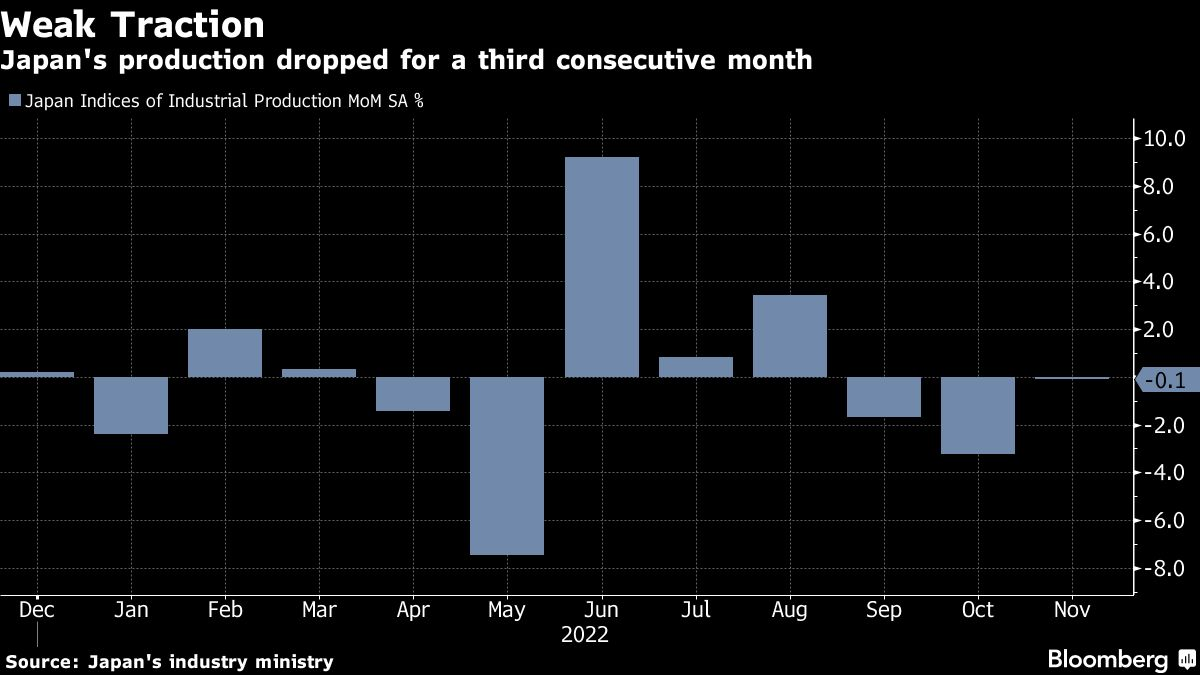 “Overall, the outlook is not very promising,” said Kota Suzuki, economist at Daiwa Securities. “The economies of the U.S. and Europe will slow down as monetary tightening takes effect. Even with the easing of China’s COVID Zero policy there are concerns about short-term disruptions from an infection surge.”

The latest figures showed production still below levels at the end of 2019, an indication that the economy has yet to gain its pre-pandemic power. BOJ Governor Haruhiko Kuroda has repeatedly said the economy needs continued support while it lacks its pre-COVID strength.

Since the BOJ’s shock move December 20 to allow wider movements in long-term bond yields, speculation has ballooned of more changes to come. Kuroda steps down in April and a new governor will likely have to consider how the central bank will steer policy toward normalization in the future.

For now, the latest figures offer few signs of the strength needed in the economy to justify further tweaks to the central bank’s stimulus before the governor leaves.

Retail sales data released December 27 showed an unexpected fall in consumer spending even after the first full month of reopened borders to foreign visitors. Economists said the drop in spending suggests inflation in Japan is starting to weigh on sentiment after the release of pent-up demand from the pandemic.

With demand weakening at home and abroad, Japan’s recovery from an economic contraction over the summer may prove less robust than hoped. With a gloomy outlook, companies may be less willing to make the larger wage increases sought by the central bank and government to help stabilize a cycle of stable growth and prices.

“Recent indicators don’t seem to provide support for more policy tweaks by the BOJ,” Suzuki said. “In the end, it will depend on next spring’s wage negotiations. So we’ll have to wait longer for any indication of a policy change.”