Container shipping rates are heading higher again, driven to new heights by unrelenting consumer demand and company restocking from Europe to the U.S. that are exhausting the world economy’s capacity to move goods across oceans.

After peaking in late 2020 and not budging much through the first quarter, the rate for a 40-foot container to Los Angeles from Shanghai hit $4,403 last week, the highest in Drewry World Container Index data going back to 2011. Cargo shippers on less-traveled transatlantic routes are feeling the sting, too: Rotterdam to New York surged to a record $3,500.

With their fiscal and monetary floodgates wide open, countries with advanced vaccine programs are countering COVID-19 headwinds of unemployment, weak services industries and restricted travel. But the wave of stimulus buoying consumption has inundated the supply side — the manufacturers of goods that often rely on global distribution chains.

Last year the spike in seaborne freight rates was initially viewed as a short-term reaction to an historic demand shock in the early stages of the pandemic. Now, it appears that sustained high rates and stretched capacity may extend into a second year as the world’s economic recovery gathers steam.

“I do not expect rates to return to the low levels we’ve seen prior to the crisis, at least not any time soon,” said Jochen Gutschmidt, a former executive of Danish container carrier A.P. Moller-Maersk A/S and Switzerland’s Nestle SA, now a vice president for global supply chains at Sea-Intelligence in Copenhagen.

Any hope for a return to more normal conditions this year was quashed with the beaching of the Ever Given that stalled traffic through the Suez Canal for almost a week in late March.

“Imagine if you have a machine that’s running at 100%, with everything squeezed to the maximum, and then you start poking holes in it — Suez Canal, ship congestion or Covid cases on port workers,” said Patrik Berglund, the CEO of Oslo-based Xeneta, an ocean and air-freight market analytics platform. “All of these things on maxed-out machinery are creating massive disruptions.”

Though the Suez blockage ended weeks ago, it might take four to six more months to iron out all the operational disruptions it caused for ship operators and ports, according to Lars Jensen, CEO of Vespucci Maritime in Copenhagen. On top of those kinks in supply chains is the robust consumer demand that shows little signs of easing up.

“We are not seeing inventories being built up, so all of this cargo that’s being moved into the U.S. is actually being sold,” Jensen said on a webinar on Friday. “That is another indicator that the boom is not about to be over.” 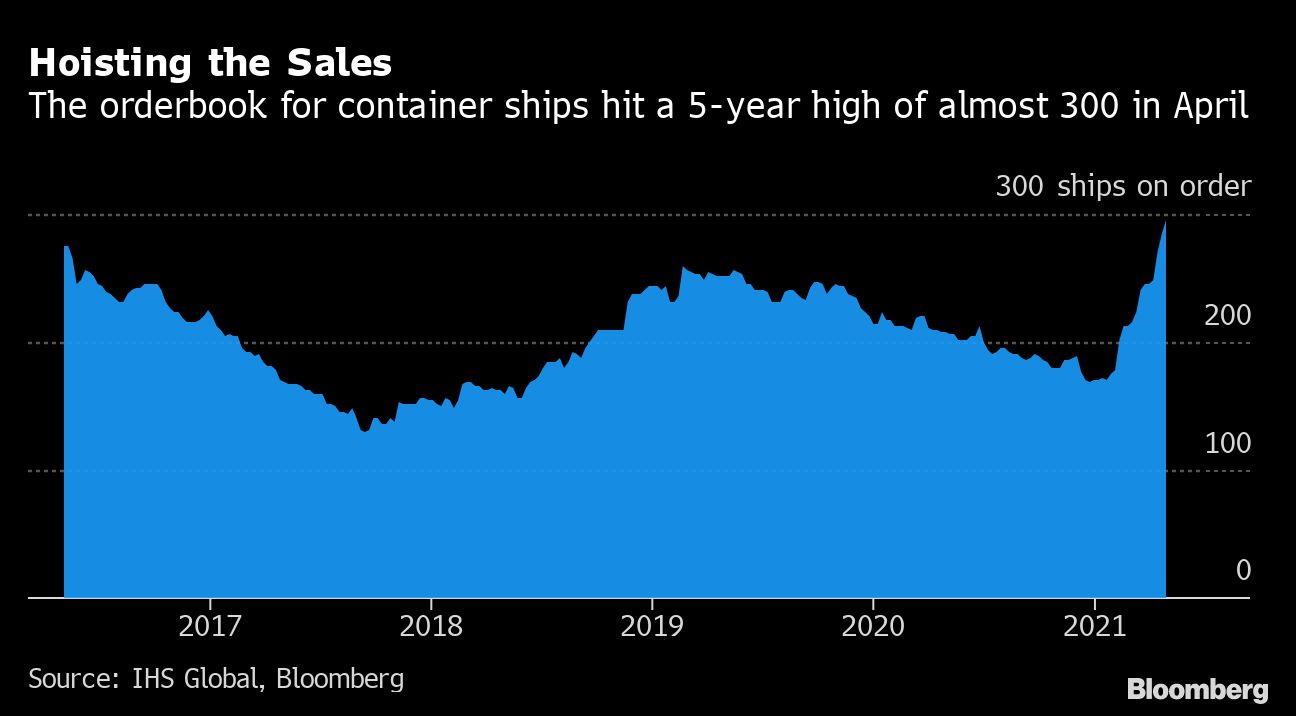 U.S. container imports on transpacific routes increased more than 50% in March compared with March 2019, and April and May volumes may be even higher, said Nerijus Poskus, vice president for global ocean at Flexport, a San Francisco-based freight forwarder.

Rates for May sailings are “going through the roof” — with some offers exceeding $10,000 per container and a few reaching $15,000, he said. Missing from the widely cited rate indexes are hefty premiums the carriers charge to guarantee delivery or reduce the wait.

To shorten the journey through congested American ports, some shippers have routed cargo through Colombia or by loading onto different ships around Panama, Poskus said, “but those options are already gone.”

Most logistics experts agree the situation can’t stay this disrupted forever, but there’s a growing sense that relief might not come until 2022. Even those sentiments are part guesswork.

“There’s an expectation that very strong conditions last deep into the year, likely maybe even certainly through the summer, likely into the fall and maybe through the year,” Brian Sondey, chief executive of Bermuda-based container leasing firm Triton International Ltd., said on an earnings call last week. “The betting is sometime end of this year or early next year when maybe the trade world starts to get back toward normal, but again that’s just a guess.”

One way to help ease the capacity strains is to build new ships, and orders for container vessels jumped by 50 in April — the most since 2007, according to IHS Global data compiled by Bloomberg. But they take a few years to construct.

A quicker way to add capacity is with additional containers, and Triton is ordering $2.6 billion worth of them this year. New containers cost about $3,500 each, according to Sondey, up from about $2,500 in November and more than double the $1,600 they were fetching in 2019.

The carriers are also investing in more equipment: Maersk said it’s adding 260,000 20-foot equivalent units, or TEUs, by the end of this quarter, Germany’s Hapag-Lloyd AG is ordering 150,000 and France’s CMA CGM SA will have introduced 250,000 by July.

The global pool of containers is forecast to increase by 5.8% to 45.7 million TEUs this year, said John Fossey, Drewry’s head of container equipment and leasing research. That’s up from a 1% gain last year and nearly double the projected annual increases from 2022 to 2025, he said.

Separately, researchers at the European Central Bank said all the supply difficulties will delay but not derail the global recovery. “As lockdowns are lifted and consumers rebalance their spending toward services, some easing of the current supply bottlenecks should be expected, with knock-on effects on shipping costs,” they wrote in a note published Monday.