When COVID-19 erupted 21 months ago and upended retailers around the world, it looked like just another chapter in the sad story of an industry’s decline.

The reality of the pandemic era, however, hasn’t played out that way.

Yes, there was a shakeout with thousands of stores, and some chains, closing for good. A wave of retail workers lost their jobs, some permanently, and an unknown number got sick. But Covid’s shock to the system also brought overdue changes that will fortify the sector for years to come, including big investments in technology, the creation of new methods to connect with consumers and speeding online delivery.

For all the human misery the coronavirus has brought, it’s not hard to make the case that the pandemic will ultimately strengthen the global retailers who made it through. It’s a startling turnaround from the doom-and-gloom predictions for the industry in mid-2020.

“The idea that stores are dead has been proven to be a fallacy,” said Michael Baker, an analyst for D.A. Davidson who has covered U.S. retailers for more than two decades. “A lot of retailers are coming out of this stronger than going into it.”

The pandemic pushed shoppers across the globe to adapt quickly, which forced retailers to do the same. Stuck in their homes in those first few months and then wary about visiting stores when they reopened, consumers flush with cash from government stimulus programs — along with savings from not traveling or eating out — embraced e-commerce like never before. That’s why the outlook appeared so dour early on for retailers who depended on foot traffic to brick-and-mortar locations.

Since Amazon ignited the online shopping era more than two decades ago, the big question has been how do legacy retailers survive? The industry’s answer eventually became “omnichannel,’’ a fuzzy buzzword about intertwining stores and the internet. Retailers had been investing on that front — think of innovations like online ordering with in-store pickup — but sporadically.

The pandemic created the existential threat many needed to fully embrace that vision. They responded by shaking up their business models in unprecedented ways, everything from how they handled customer service to the ways they fulfilled orders (cue groceries ordered online being delivered to the back of an SUV in a Walmart parking lot just a few hours later).

“It completely changed the way we shop,” said Greg Buzek, president of researcher IHL Group. And now retailers are deploying technology at a “once-in-a-generation” rate, with huge increases in the use of warehouse robotics and inventory-management tools like electronic shelf tags, he said. 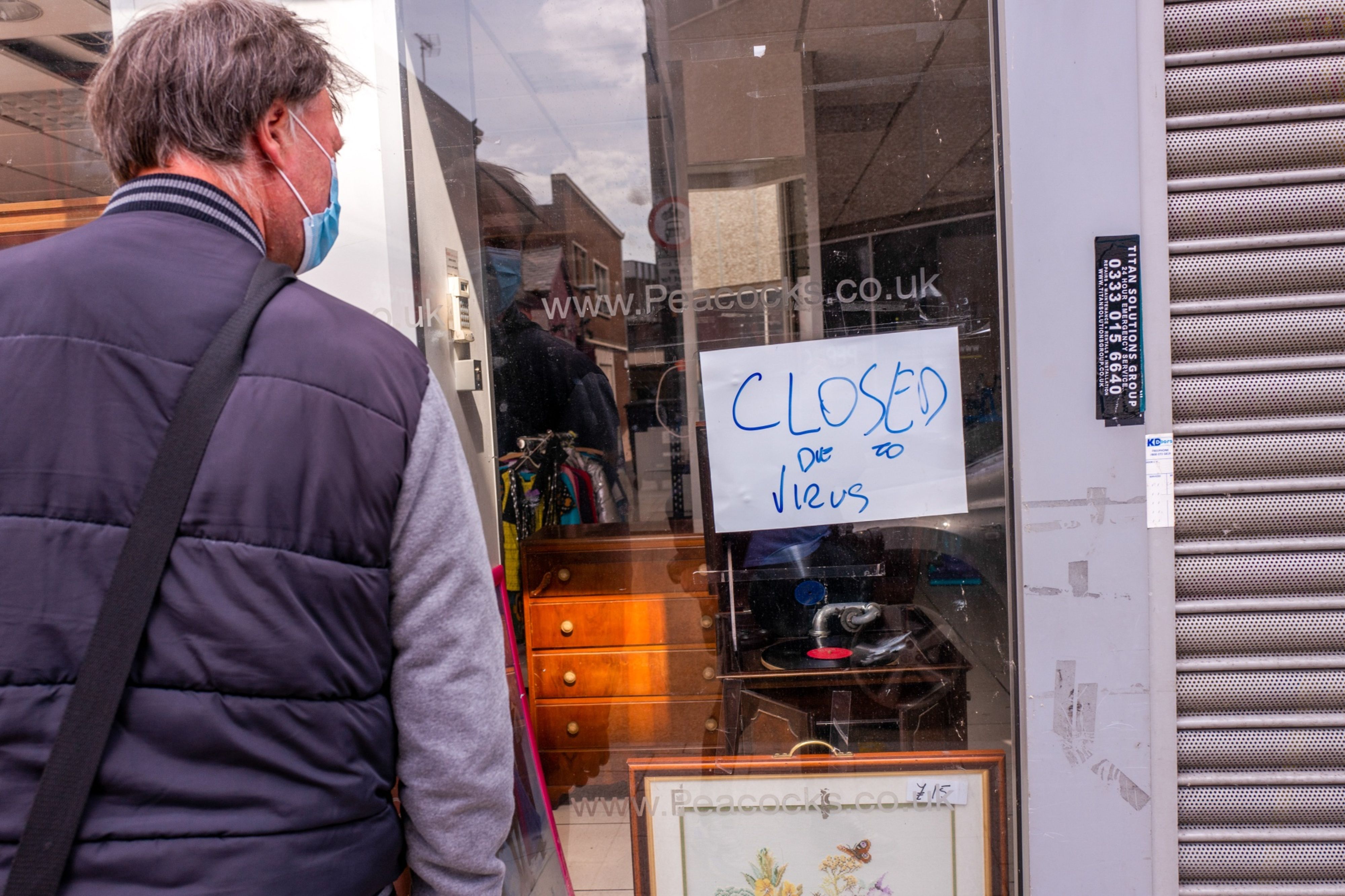 A sign reading 'closed due to virus' hangs in the window of a closed shop in Stockport, U.K. Photo: Bloomberg.

In China, one of the world’s most sophisticated retail markets, stores quickly pushed deeper into e-commerce. More embraced the use of chat groups to complete orders and keep in touch with customers who no longer wanted to visit in person, according to consultant Kearny. Retailers of all sorts increased sales via live online video streaming (like a home shopping channel for the digital age). In Wuhan, the original epicenter of the pandemic, a food-delivery service helped retailers set up contact-free pickup, kicking off a boom in that kind of fulfillment.

Marks & Spencer, the British department-store chain who has been trying to turn itself around for more than a decade, used the pandemic to speed up its transformation by shutting poor-performing stores and investing in digital offerings, including online grocery. The chain has lifted its profit forecast twice this year — the first upgrades this millennium — as its stock surged more than 60%.

With stores shuttered in the U.S., retailers adopted new ways to serve customers. Livestream selling spread from China and became a bona fide revenue source thanks to inexpensive and easy-to-use software. Chains also pushed more of the traditional in-store experience to the web. Signet Jewelers, owner of the Jared brand and other chains, added video calls with an associate from its locations that eased the resistance to making a big purchase online.

And retailers also figured out ways to push more e-commerce into their locations. That included making it easy for in-store employees to help online customers by chatting and sharing pictures and video via mobile app.

Shopping patterns also dramatically shifted in places where e-commerce was in the early stages of development. Retailers in markets spanning Mexico to Russia were pushed to speed delivery and build more secure payment systems. In just one example, the Mexico division of U.S. retailer Home Depot now lets customers buy items online and pay for them at a store, including with cash, which is still the dominant way to pay for goods there.

Of course, the success of many of these advancements will hinge on how well these new consumer behaviors stick post-Covid. Retailers are betting that services, like picking up online orders at a store, will become a bigger portion of their sales. The pandemic also gummed up supply chains and caused labor shortages that pushed wages higher. It remains to be seen how long these hurdles last.

The Covid era will also be remembered for all the retailers who didn’t make it and the employees who got infected by the virus. Pier 1 Imports in the U.S. and Britain’s Arcadia Group, owner of Topshop, were among the chains who shut down their locations. And many others without as much money to invest as big players haven’t been able to undertake meaningful pivots. They still look vulnerable, especially as pandemic-era stimulus programs are petering out and the emergence of the omicron variant is causing a surge in Covid cases in several parts of the world.

Retail Sales on the Rebound

But for the big players who got things right, 2021 saw a remarkable rebound. In the U.S., chains with more than 50 stores are expected to have added more than 4,000 locations this year — led by discount chains Dollar General and Dollar Tree. That would mark the first net increase since 2017, according to IHL Group. Total closings among this group in 2021 are estimated to have been 3,500, a quarter of the 2020 total.

The comeback is a big reason why the SPDR S&P Retail exchange-traded fund, which tracks the S&P Retail Select Industry Index, has surged 32% this year, easily topping the broader S&P 500 Index’s advance. Retail stocks in other parts of the world haven’t fared as well, though.

Even with Covid variants hammering some parts of the country, overall visits to U.S. stores this year are only 0.8% below the same period in 2019, according to Placer.ai, which uses anonymous mobile phone data to estimate foot traffic. Many of the biggest chains spanning various categories are drawing more shoppers than before the pandemic. These include Target, Lowe’s, Dick’s Sporting Goods, Ulta Beauty and Bath & Body Works. Visits to Walmart, the world’s largest retailer, are just 2% below 2019 levels so far this year, Placer.ai data show.

Foot traffic is being aided by stores fulfilling online orders for pickup. Best Buy is among the chains who built curbside pickup systems on the fly during the pandemic so customers wouldn’t have to enter stores. Target’s shopping app now allows drive-up customers to choose exactly where bags are placed in their car.

On top of all this, physical stores are still where the overwhelming majority of goods are purchased. While in China e-commerce is about 30% of total retail sales, the rate in giant markets like Japan, Mexico and India are less than half that.

Even brands born online are continually showing the value of physical locations by turning to them to boost growth after e-commerce gains stall. In the U.S., Warby Parker, an eyewear company who helped jumpstart the boom in digital-native brands, is increasingly betting its future on brick-and-mortar. Stores can also increase profitability in a myriad of ways, including reducing returns — a big hit to e-commerce margins.

“The biggest changes going forward will be the relationship the consumer has with the store,” said Deborah Weinswig, a veteran retail analyst and founder of Coresight Research. “I’ve never seen the opportunity ahead for retail as big as it is now.”