The supply chain crisis that has clogged the U.S. logistics network has made the country’s two largest ports of Los Angeles and Long Beach the least efficient trade hubs for handling containers worldwide, a new report showed.

Responsible for about 42% of all U.S. containerized trade with East Asia, the southern Californian twin hubs ranked in the final two positions of the World Bank and S&P Global Market Intelligence’s 370-member Container Port Performance Index for 2021, the companies said in a report released Wednesday. A majority of the busiest U.S. sea gateways — including Georgia’s Savannah, New York and New Jersey and California’s Oakland — ranked in the bottom half of the list. 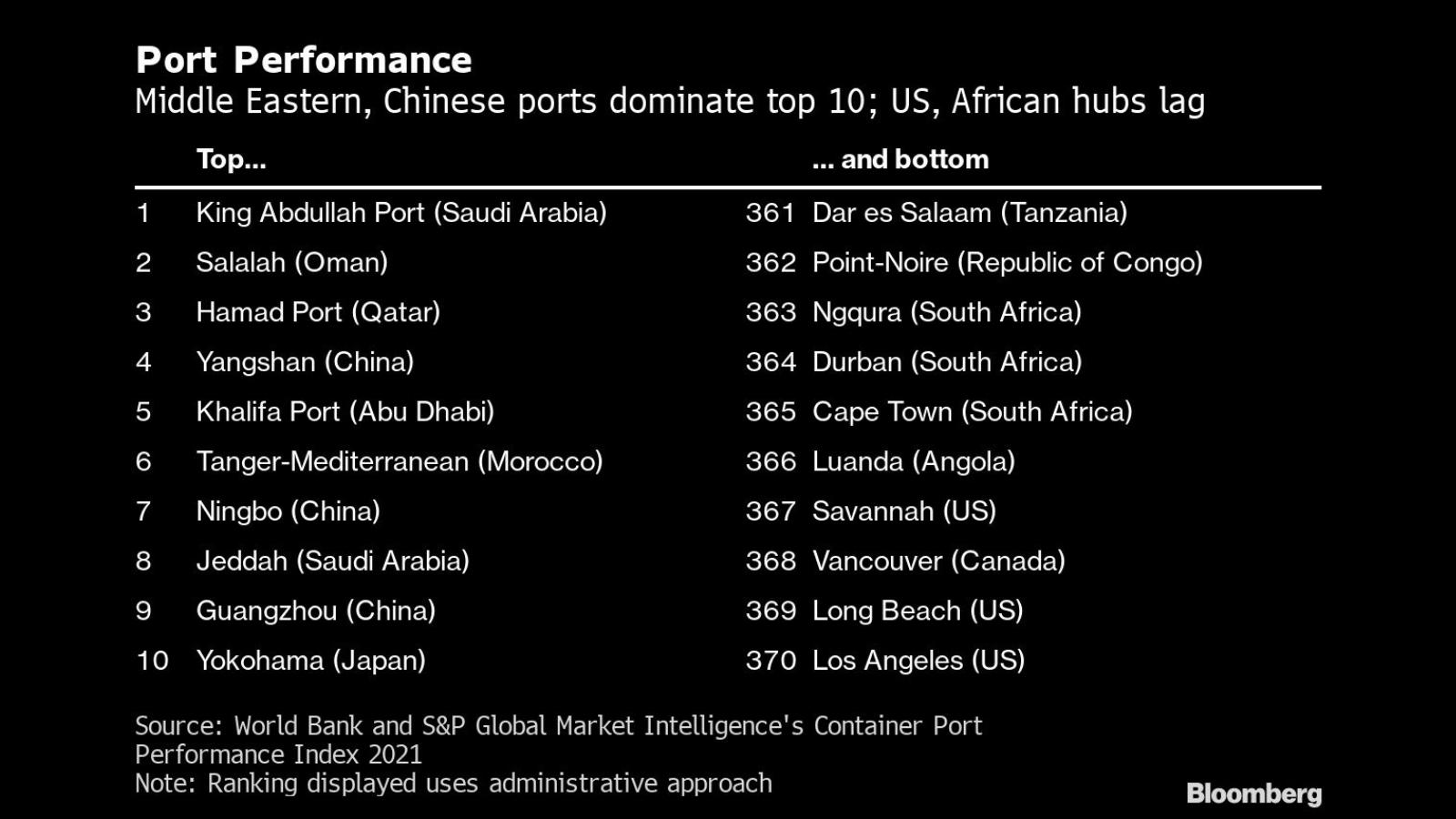 Maritime transport moves more than 80% of global merchandise by volume; even before the COVID-19 outbreak, ports were already handling more cargo, which pushed those with weaker infrastructure to “the limits of their capacity,” said S&P Global Market Intelligence Associate Director Turloch Mooney, one of the authors of the report.

In the U.S., demand for goods exploded as homebound consumers turned to e-commerce, with American ports struggling to cope with record volumes of imports.

“The pandemic ballooned that trend,” Mooney said in an interview.

The analysis considers how many hours a ship spends at a port during each call, defined as the elapsed time between when a vessel reaches a port to its departure from the berth having completed its cargo exchange. It includes ports that had a minimum of 20 valid port calls within the 12-month period of the study. The report produces two indexes — one that ranks operations administratively, and the other using a statistical approach. Discrepancies between the two methods were markedly reduced in the 2021 report compared with the prior year’s study, it said.

Smaller U.S. ports made it to the top 50 of the ranking for the first time this year, driven in part by the enhanced performance of East Coast gateways. Some of these hubs have invested billions of dollars in infrastructure as the 2016 expansion of the Panama Canal allowed the world’s largest ships to reach the Atlantic Coast more easily.

The Port of Virginia, which announced this week it has secured funds to become the deepest gateway on the East Coast, was ranked the most efficient port in North America in the 23rd spot — up more than 60 positions from last year. Led by the Port of Miami in 29th position, at least three Florida ports made it to the top 100. Hubs in North Carolina, Pennsylvania and Maryland were also among the most efficient.

Once more, Asian and Middle Eastern ports dominated the ranking. Saudi Arabia’s King Abdullah Port is now the most efficient gateway in the world, followed by counterparts in Oman and Qatar respectively. Meanwhile, China has three hubs in the top 10 — Yangshan, Ningbo and Guangzhou — the most of any country.

Compared with U.S. ports, those in Asia and parts of Europe tend to be more modern and have the capacity to handle more cargo, which gives them an edge to operate more efficiently around the clock, Mooney said. That also means that when ships reach the other side of the Pacific Ocean, U.S. gateways can’t keep up with that level of efficiency, he added.

“You have 24/7 operations at the loading ports in China,” Mooney said. “If you’re loading 24/7 there, and you’re not offloading 24/7 at the destination ports, you’re going to have some choke points and some backlogs.”