Soaring shipping costs are piling pressure onto physical oil markets that are already being hit by uncertainty surrounding a cap on Russian crude prices and weak Chinese buying.

Earnings on the industry’s benchmark trade route breached $100,000 a day on November 21, the highest since early 2020 when COVID-19 caused a surge in tankers storing cargoes. With sanctions on Russia now forcing ships to take longer routes — drying up the pool of available vessels — oil companies and traders are having to pay ever-higher prices to transport cargoes. That’s adding to the cost of crude. 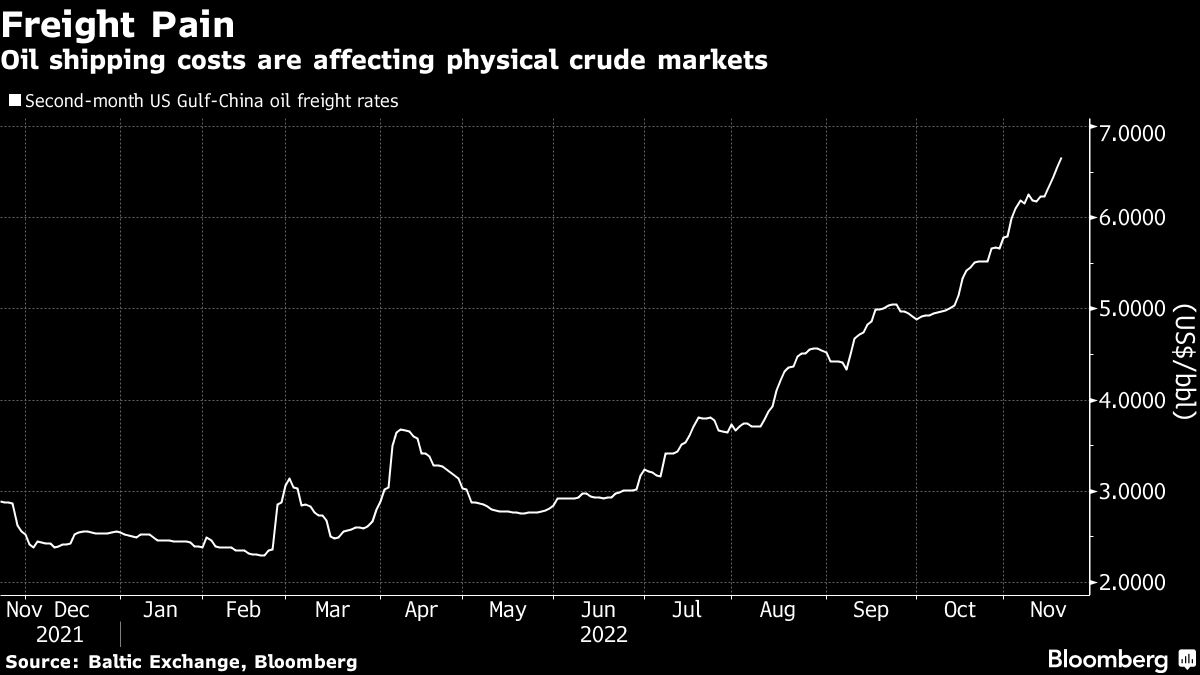 “Shipping has become a tangible drain” on the price of oil where it’s loaded, compounding weak buying from China, said Viktor Katona, lead crude analyst at Kpler, a data and analytics firm. In addition, there’s “trepidation” from buyers about the market impact of a cap on Russian oil prices, according to Katona.

From December 5, a cap will be imposed on Russian oil prices for companies wanting to access ships and services including insurance provided by businesses in Group of Seven nations. The actual cap level hasn’t yet been set, making it hard for buyers to plan how much they might want to purchase from Moscow.

The high freight rates that owners are earning are also reflected in high per-barrel transportation costs for traders. U.S. Gulf shipments to China, one of the industry’s longest-distance mainstream routes, now cost about $6.60 a barrel, Baltic Exchange forward freight data compiled by Bloomberg show. That’s almost three times where it was in February.

Several Mediterranean crudes, which trade at differentials to the North Sea oil grade Dated Brent, have slipped by at least $1.50 a barrel from a month ago, while more than 20 West African cargoes continue to struggle to find homes even after offer prices were cut multiple times.

An overhang of crude cargoes in Europe stemming from labor strikes across the continent “is depressing prompt pricing just as markets are sourcing barrels from further afield in switching out Urals,” Russia’s main export crude, said Kit Haines, an analyst at Energy Aspects Ltd.

“This means anytime you have an unplanned outage your prompt crude gets backed up pretty fast, and with China out of the market at the moment, there’s not really anywhere to clear,” he said.

Spot differentials are tanking in the Americas with U.S. crude for loading in December being offered at a discount of $7 to ICE Brent, compared with $2 a few weeks ago. Meanwhile, Colombia’s Castilla has reached the widest discounts since the pandemic.

In Asia, spot premiums of various Middle Eastern crude varieties from Abu Dhabi’s flagship Murban to Qatar Marine and Oman have slumped further for January-loading barrels, according to traders selling and buying these cargoes.

In typical months, barrels from the Persian Gulf are in more demand by Asian buyers when freight surges as refiners and traders go after those more-local supplies rather than long-haul grades from the Atlantic Basin.

The escalating shipping costs, however, are being offset by falling spot premiums in the current cycle even for OPEC producers’ crude, traders said.

The West African crude market was hit hardest by surging freight as more than half of its cargoes are shipped to faraway locations including China and India. Nearly half Nigeria’s cargoes for December have yet to find homes even though the trading cycle for January has kicked in.

In the Mediterranean, Caspian CPC Blend was offered at about $5 to $6 a barrel below benchmark Dated Brent, compared with a discount of $3.50-$4 a month ago.

Shrinking availability of tankers not only causes a surge in freight rates, but also increases the rates for demurrage — the costs of delays in and around ports. Demurrage costs for so-called very large crude carriers are now estimated at about $120,000 to $130,000 a day, up by about $50,000 from two months ago, said shipbrokers.

To minimize that, many cargo lifters are trying to arrive at the ports just in time for loading, which increases the potential for unforeseen delays.

A cargo of North Sea oil was loaded onto a VLCC from Hound Point in Scotland almost five days later than originally scheduled, a delay that has rarely been seen at this terminal, said people with knowledge of matter.

The slump in China’s buying has bought Europe extra time as it seeks to work out how to replace around 800,000 barrels a day of Russia’s flagship Urals crude after the EU embargo on the OPEC+ producer’s imports takes effect in December, said Haines, who expects China to return in earnest in spring 2023.

“Chinese buying is tepid for now which will soften the blow,” he said. “But once China is back in the market -- likely for second-quarter barrels -- China will be the key variable to 2023 balances.”

That said, some traders are of the mind that prices have already sunk enough to stimulate more Asia buying. Sales of January- and February-delivered barrels of Brazilian crude to China picked up when sellers lowered the ask price to the level Chinese state oil companies and South Korean refiners were bidding.