Home » Blogs » Think Tank » The Impact of the Russia-Ukraine War on the U.S. Economy

The Impact of the Russia-Ukraine War on the U.S. Economy

Each day brings coverage of different aspects of the Russian invasion of Ukraine. Common topics include U.S. involvement in the war relating to NATO security, military and humanitarian assistance to Ukraine, and the imposition of sanctions on Russia. Less prominent is a clear perspective on the war’s impact on the U.S. itself.

Supply chains have been disrupted at the source, in transit, and at destination. It becomes important, therefore, to measure the impact of these disruptions on the U.S. economy, and determine which commodities are likely to be in short supply as a result.

Quantifying the impact is challenging for the following reasons:

American businesses depend on Russia and Ukraine for a plethora of commodities. According to data from the Observatory of Economic Complexity (Figures 1a and 1b), four critical ones— neon gas, palladium, platinum and pig iron — will be in short supply. 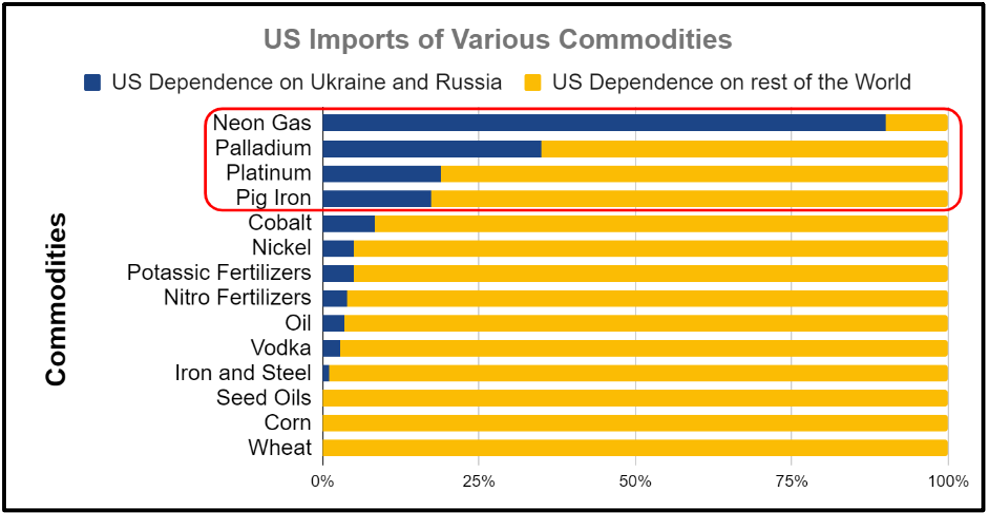 Figure 1a: Commodities where the U.S. is highly dependent on Russia and Ukraine 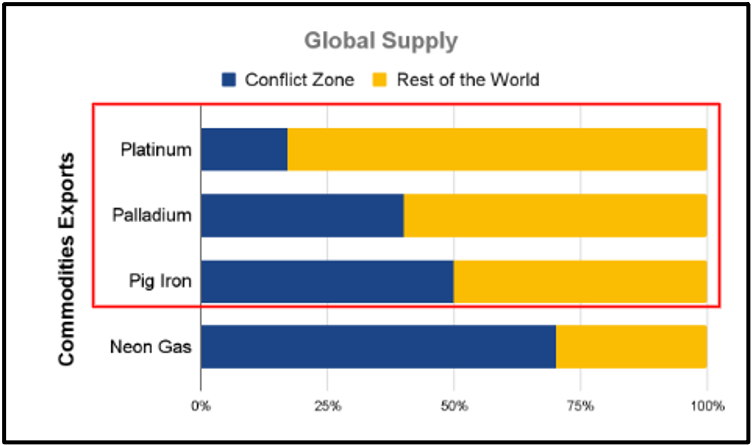 Figure 1b: Contribution of Ukraine and Russia to the global supply of these commodities

While these commodities seem relatively niche, our analysis revealed that the shortages will have a direct impact on approximately 12% of the U.S. economy. We based our conclusions on a subjective analysis of the industries that are dependent on the determined critical commodities, as well as their contribution to U.S. GDP. We identified a direct impact on manufacturing, electronics and automotive industries. Further dependencies of these industries are captured in Figure 2. 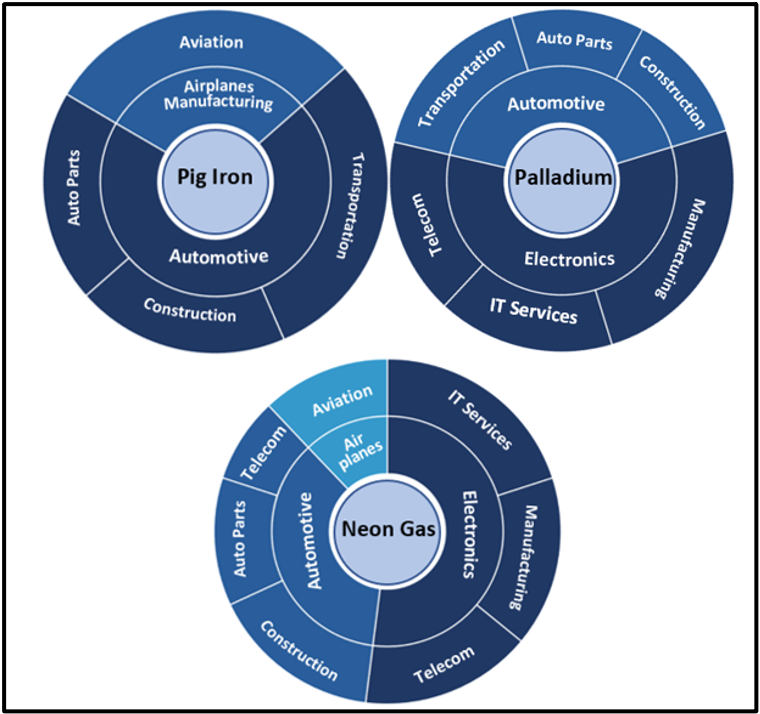 Ukraine and Russia are key suppliers of several commodities that have become scarce due to the war. The shortage of these commodities has led to substantial price increases (Figure 3). How does this trend play out over time? Comparing price change percentages up to June and August of 2022 shows that percentages have decreased for most commodities. A reasonable explanation for this phenomenon could be that the immediate shock and panic of the initial months post invasion has neutralized over time. 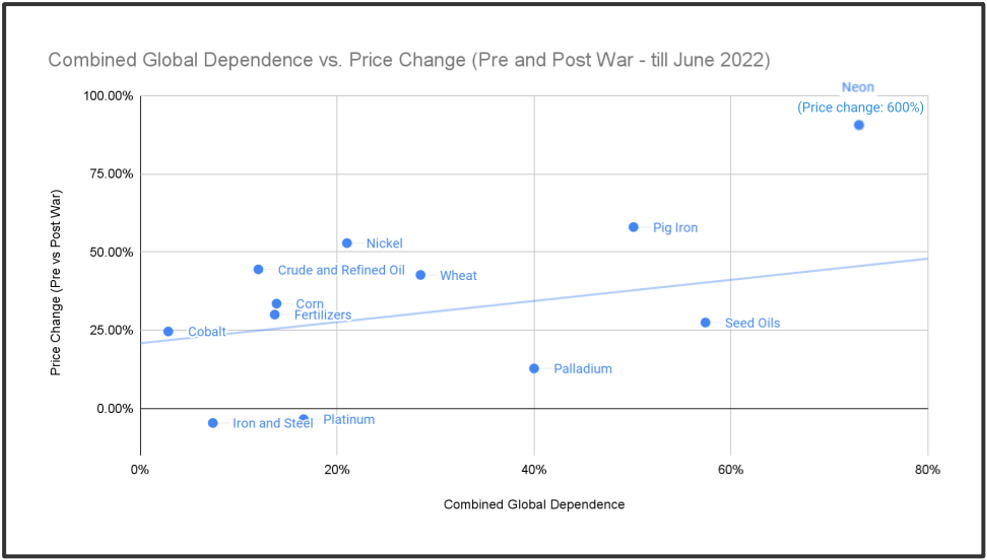 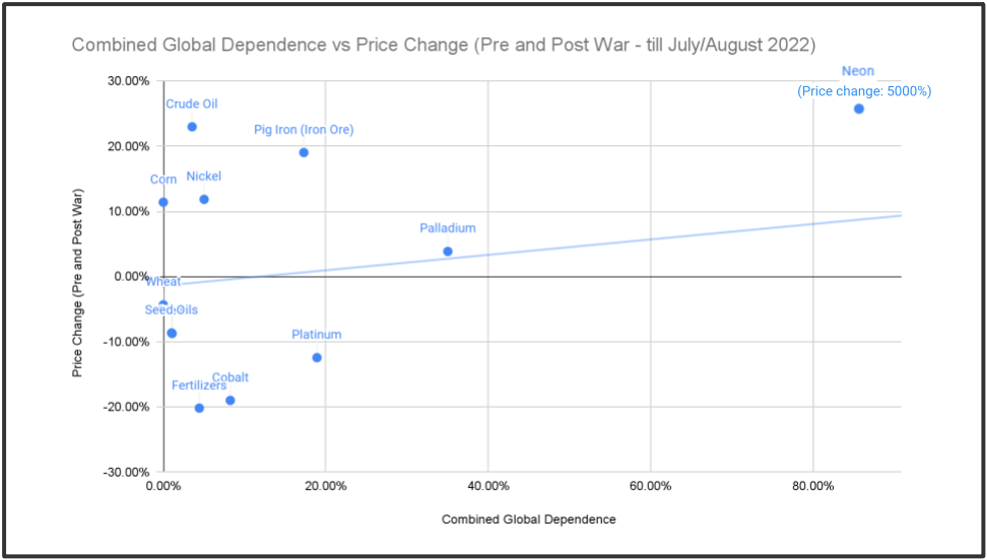 Figure 3: Correlation between price rises and combined global supply dependence on Ukraine and Russia (where price change has been calculated post war for June as well as July/August 2022)

This analysis has the potential to be used when determining whether to go short or long on a commodity.

The same methodology can be used to predict the outcome of any supply chain disruption globally. This deeper analysis, however, requires us to examine some prerequisite conditions. To use the same methodology, we would need to study the commodities with concentrated supply sources, and the potential for supply chain bottlenecks.

Consider the example of palm oil in Indonesia. Understanding its supply chain is essential to assessing the possibility of disruption. The key findings were: 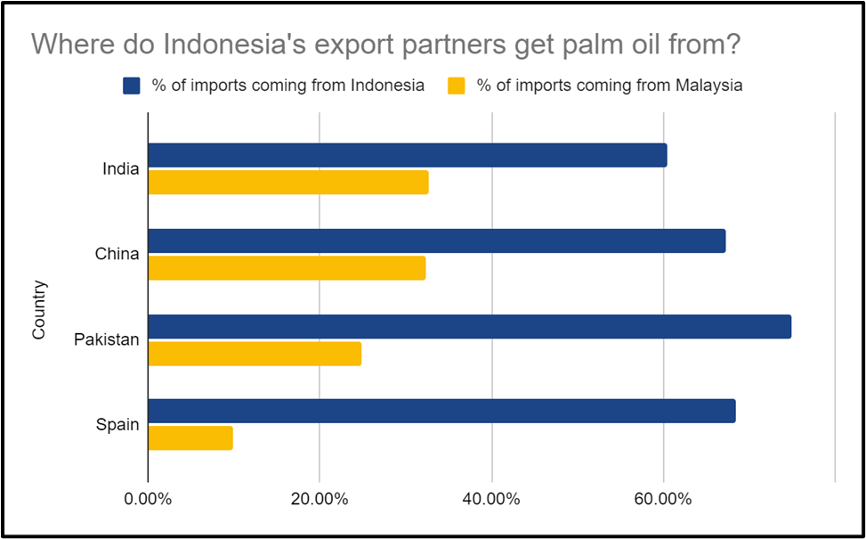 War, put simply, is a drain — be it of human life, natural assets, or financial resources. In the absence of avoiding war completely, the next step is to mitigate its effects. And that starts with facing the truth, by measuring war’s full impact.

Turbulent times will show themselves from one generation to the next. An economy’s best bet to survive such moments of turbulence is being proactive.