Mince pies. Latkes. Eggnog. Tamales. As extended families the world over plan holiday celebrations again, they’re encountering a harsh reality: Traditional foods, especially those sold for a limited time in even a normal year, are significantly costlier in 2021 — if they’re even available at all.

“You might be able to trade down on some things; instead of the high-priced turkeys or steaks, you might consider something less expensive on that side of the dinner table,” said Curt Covington, senior director of institution credit at AgAmerica Lending, which loans money to farmers. But there’s no escaping it: Everything on the holiday table “is just going to be more expensive.”

Here are snapshots in five counties — Brazil, China, the U.K., Romania and the U.S. — highlighting some of the ways runaway food prices will mute year-end festivities. Households may be yearning for a return to normal, but with supply chains buckling under the weight of widespread labor shortages and the continued strain of COVID-19, feeding families this holiday season will be anything but.

Fatima Santos describes her family’s planned Christmas Eve supper in 2021 in one word: lean. Neither cod nor turkey — traditional centerpieces in many Brazilian homes for the holidays — will make the cut this year, the 41-year-old unemployed hairdresser said while combing the shelves for deals in a Rio de Janeiro supermarket. “Egg is the new steak in our home. Even rice and beans are super expensive,” she said. That’s hardly a seasonal specialty, but the staple dish might grace more holiday tables like hers as meat prices become increasingly hard to stomach.

Although the country is one of the world’s largest producers of agricultural commodities, soaring demand abroad and a weak local currency are making exports more profitable, leaving less Brazilian-grown food for Brazilians at home. At the same time, this year’s extreme weather — the worst drought in a century followed by an unprecedented frost — severely damaged the nation’s crops, stoking inflation. Think tank Getulio Vargas Foundation calculates beef prices are up about 15% in the last year, while chicken costs have soared more than 24%. 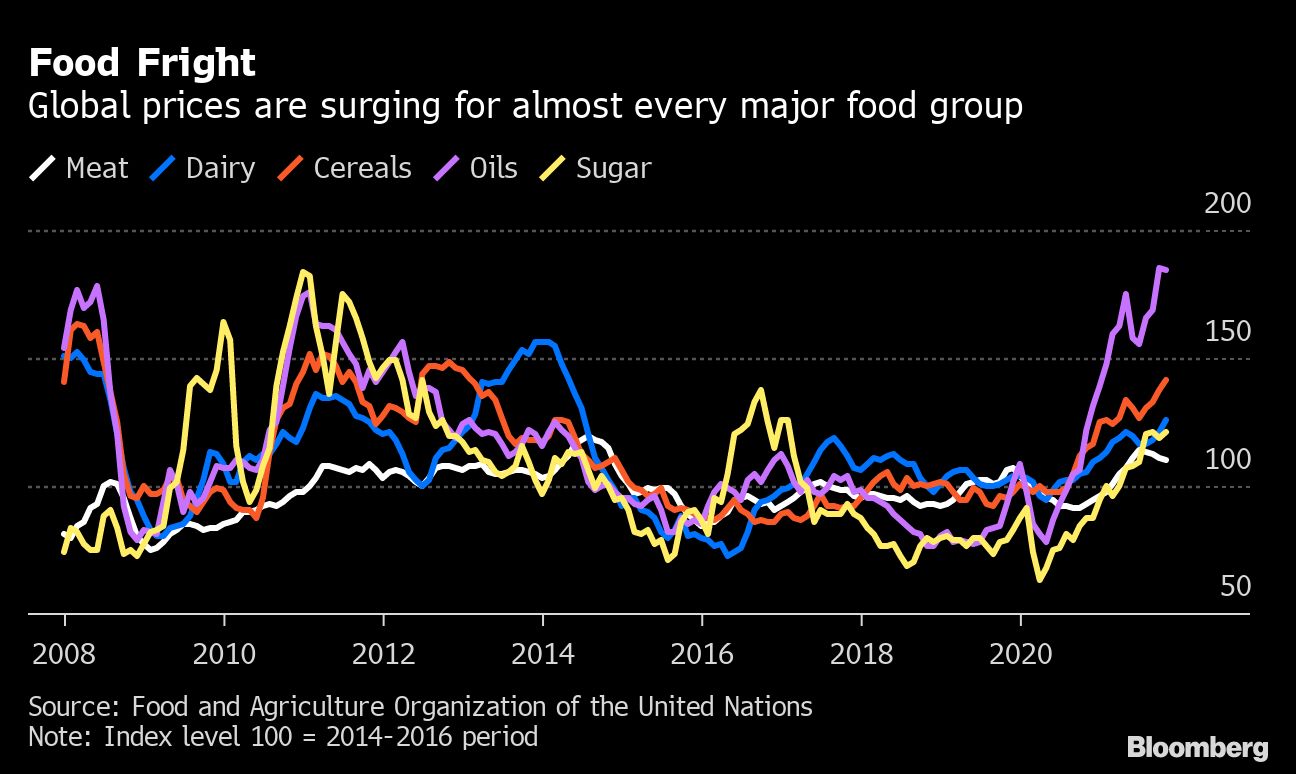 Grocery chain Zona Sul has been trying to stock its shelves with more local products so families can avoid the worst of the inflation. Traditional Norwegian cod is still available in the weeks leading up to Christmas, but the store is also pushing Amazon fish pirarucu for half the price. With sparkling wine imports delayed due to container shortages, the chain is discounting regional alternatives. “As purchasing power diminishes, people are looking for secondary brands,” said the chain’s executive director, Pietrangelo Leta.

Priscila Santana, a professional chef, usually sells rabanadas — a dessert resembling French toast — around the holidays. But she’s had to boost prices this year by more than 10% on rising costs for bread, milk and eggs, plus the gasoline required to even get to the store. Despite starting sales several weeks earlier this year and accepting both credit cards and company-issued meal tickets, she’s still seeing lower demand. “I expect to sell 20% less this year. Some of my clients had to give up the rabanadas to buy their lunch instead.”

There’s plenty of food to go around in the world’s most populous country, the Ministry of Commerce insists. But that hasn’t stopped Chinese households from stocking up — and in some cases, hoarding — following a confusing advisory from the government in early November that encouraged people to restock essentials ahead of winter, stoking fears of travel restrictions, virus outbreaks, extreme weather or worse.

“Usually one family only needs to store one bag of flour, but now they’re buying two or even three bags. Of course prices will increase,” said one shopkeeper who’s been selling noodles, dumpling wrappers and Chinese pancakes for almost 30 years. Speaking from behind his stall in a market in Beijing, he asked to only be identified by his family name, Zhou. “The more families hoard flour, the higher prices will go.”

The 25-kilogram (about 55-pound) bags of flour he buys from his supplier are about 30% more expensive than a month ago, now costing more than 90 yuan ($14). But Zhou has raised his own selling price by less than 20%, even as the winter solstice — Dongzhi — nears, boosting demand for traditional delicacies like dumplings and noodles. “My costs have risen, but I can’t really increase prices or I’ll lose customers,” he said.

“There isn’t a product that we use on this farm that hasn’t gone up,” said Becky Howe, a third-generation farmer, as she watched workers guide a flock of turkeys to an open barn on the last day of slaughtering at the John Howe turkey farm outside Kent. That includes the cost of steel used to construct the barns, chopped straw for bedding, corn feed, gas, packaging cartons and even wax for the automated plucking line. The farm wasn’t anticipating such inflationary pressure when it boosted the size of this year’s flock by 25% and, for the first time ever, started rearing geese, too.

The greatest headache has been finding enough workers during November and December, the farm’s busiest time of the year. Most of its employees are foreigners, who come to the country on temporary visa permits; the farm has boosted pay this year to retain staff. It has raised the price of its turkeys by 8%, but its own costs have gone up more. “The price increase hasn’t covered everything and we’ve had to absorb as much as we possibly could,” Howe said. “We don’t want to pass on too much and scare people away from buying our turkeys.”

Worried about rising prices — plus a shortage of U.K. truck drivers that will only exacerbate the squeeze — grocers say some families in London started buying their Christmas turkeys as early as October this year. The demand for smaller birds is particularly high as virus fears temper optimism that extended families will be gathering again this year after a 2020 in lockdown.

Romania: Priced Out of the Pig Slaughter

In the Romanian countryside, the Orthodox celebration of Saint Ignatius on Dec. 20 has followed a traditional script for centuries: Buy a pig from a trusted farmer, slit its throat, burn the skin, and clean the carcass with help from friends and family at the break of dawn. Every part of the animal — from the legs to the fat to the intestines — are then transformed into dozens of dishes to feed a household’s extended family at Christmas, New Year’s and every meal in between.

At least, that used to be the custom. This year, more families will just snag some supermarket sausages on their way home from work and call it a day, said Adi Rusu, a 40-year-old farmer from the village of Posta Calnau. Rusu’s family has been growing pigs for 40 years, but with feed and electricity costs through the roof, risks of a deadly swine fever outbreak and customers increasingly opting for easier options, his family’s talking about whether it’s even worth the hassle. It’s hard for neighbors to justify paying as much as 1,500 Romanian lei (about $340) for a local pig, a 50% hike over the last four to five years. At the same time, Covid travel restrictions that keep many working Romanians abroad mean downsized dinners — and little incentive to cook enough pork to eat for at least seven straight days.

“It’s becoming obvious we can’t eat three times more than in a regular week at Christmas,” said Marioara Mihalcea, the director of meat company M&R in Iasi. “You know you can always find fresh meat on the shelves.”

Rusu only had six pigs on offer this year, about a fifth of what he’d normally sell, after many of the piglets died at birth, but he decided supplementing with more piglets from commercial farms to turn a profit of only 400 lei (about $90) apiece just didn’t make economic sense this year. Would-be customers are “not buying from someone else; they’re going to the supermarket,” said Rusu, who picked up animal farming from his father. “Those who know how to prepare it are slowly passing away, and the young are not interested in learning.”

Americans, eating more butter than ever before, will find it costs them more than their waistline this holiday season. Once vilified for saturated fat, butter has become popular again as shoppers embrace high-fat diets, driving per capita consumption to 6.3 pounds in 2020, the highest in data going back to the Ford presidency. Butter consumption typically peaks in the fourth quarter, thanks to all the holiday cookies, mashed potatoes and other full-flavored traditions that grace the table. It’s also soaring in price.

Spot wholesale prices for Grade AA butter are up about 40% from this time last year to more than $2 a pound. There’s plenty of milk to make it, but packing and shipping have been a challenge amid widespread labor and materials shortages. Grassland Dairy Products in Greenwood, Wisconsin, recently raised its prices for supermarkets for the first time in four years. President Trevor Wuethrich cited rising cardboard expenses, trucking issues and its own decision to hike hourly wages in September in order to retain trained employees.

Some households may make the switch to vegetable-oil spreads, like margarine, to cut costs, though those are rising in price, too. Dina Cimarusti, owner of newly opened Sugar Moon Bakery in Chicago, just paid 40 cents per pound more than usual for butter in early December. For her, subbing it out isn’t an option: It’s an important ingredient for many of her home-style pastries including scones, cookies and cakes.

“It’s not just butter,” she said. “Even my produce prices have gone up significantly since I opened,” said 36-year-old Cimarusti, whose storefront debuted in September. “Unless I raise my prices, I’m obviously losing money.” For now, she’s holding pat. “I was just going to wait it out,” she said, clad in a green apron and jeans, weighing pound-blocks of butter before dumping them into a large steel mixer for molasses cookies. “I just try to keep it affordable.”