Container shipping rates are creeping higher after staying mostly stable this year, a signal that supply strains remain a drag on a global economy now bracing for an energy shock and geopolitical turmoil tied to Russia’s invasion of Ukraine.

The spot rate for a 40-foot container from Shanghai to Los Angeles rose to $11,030, up 3.3% from a week ago and 125% higher than a year ago, according to the Drewry World Container Index released Thursday. A slightly upward trajectory is also seen in weekly data from Freightos that includes surcharges and premiums: China to the U.S. West Coast rates were up 2.6% at $15,615 and China to the U.S. East Coast jumped 6% to $17,901 — both the highest since early November. 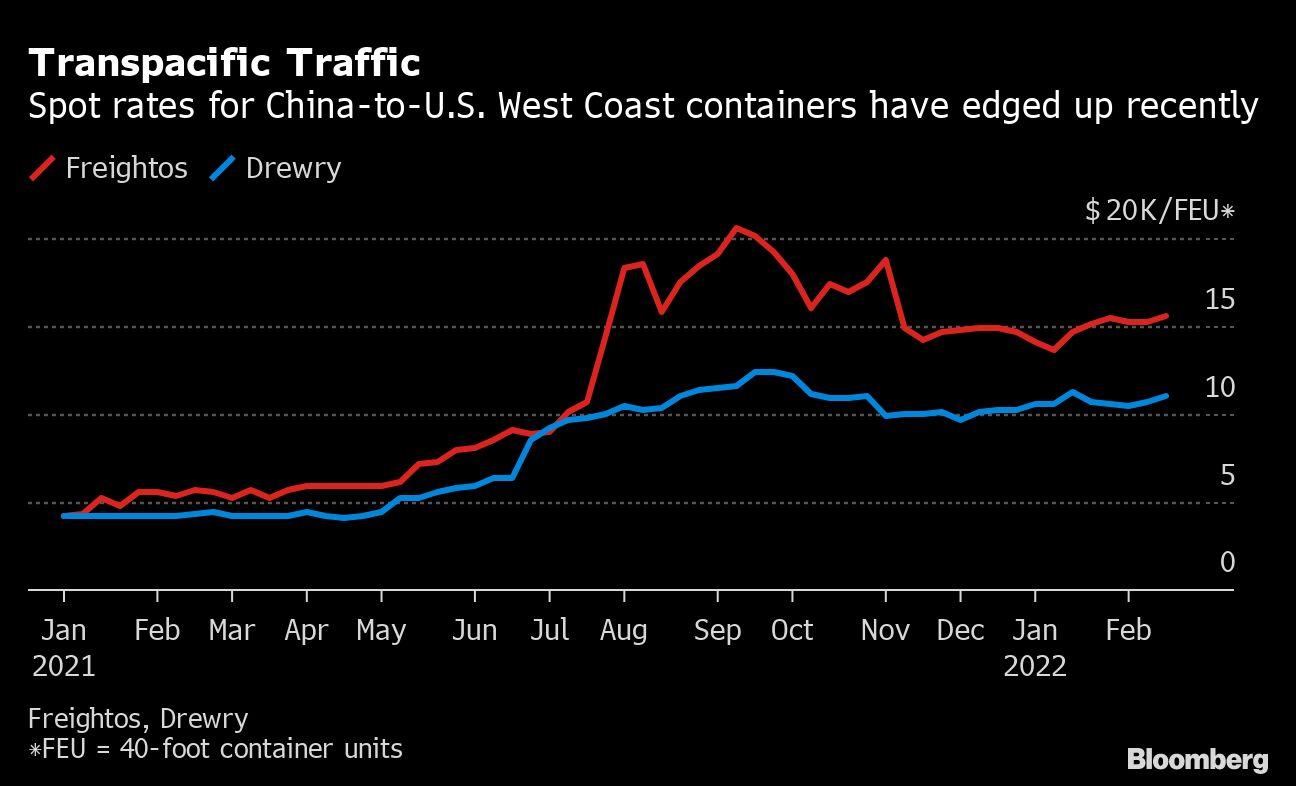 It’s unusual to see container rates not fall between mid-January and the week following Lunar New Year in China, according to research from Oslo-based Xeneta, a freight market-analytics platform. Many shippers of cargo had hoped for a decline in what’s traditionally been a seasonal shipping lull after that holiday, but it hasn’t happened.

“It just goes to show how different the market is this year compared to what we’ve seen in previous years,” Emily Stausboll, a market analyst with Xeneta, said on a webinar this week. “These are different times and you have to be ready for that to come and not expect everything to happen as it usually does.”

Port congestion, particularly in the U.S., is among the biggest reasons container rates remain elevated. Kuehne+Nagel International AG, the Swiss logistics giant, launched its Seaexplorer disruption indicator in January, and the latest reading shows shipping snarls jumped to a new high this week.

Beyond the capacity shortages, the fighting in Ukraine threatens to affect the availability of workers in maritime trade.

According to the International Chamber of Shipping, 10.5% of the world’s 1.9 million seafarers are Russian, while 4% are Ukrainian. Any obstructions to their ability to travel for work and receive regular pay would exacerbate shipping disruptions.

“Seafarers have been at the forefront of keeping trade flowing through the pandemic and we hope that all parties will continue to facilitate free passage of goods and these key workers at this time,” Guy Platten, secretary general of the chamber, said in an emailed statement Thursday.