Bavarian Nordic A/S, the only company with an approved vaccine for monkeypox, said it’s no longer certain it can meet demand and is talking to multiple production partners as cases rise across the world.

The Danish company is exploring the possibility of outsourcing some of its production, including a technology transfer to a U.S. contract manufacturer, to meet accelerating demand. Bavarian Nordic “is in conversations with multiple companies to further expand manufacturing capacity globally,” a company spokesperson said in an email.

A move to outsource some production would mark a shift for Bavarian which until now has said it could deliver on all orders from its Danish facility. It also previously said a technology transfer to a third-party — which would allow bulk manufacturing rather than just ‘fill-finish’ where doses are put into vials and packaging — would be too cumbersome, expensive and take too long.

“It’s a very dynamic market situation,” Rolf Sass Sorensen, a vice president at the firm, said by phone last week. “Demand keeps rising and it’s no longer certain that we can continue to meet the demand we’re facing even with the upgrade of our existing manufacturing site in Denmark.”

The flare-up of the virus, which has spread to thousands of people in more than 70 countries in just a few months, was declared a public health emergency of international concern by the head of the World Health Organization last month. The U.K. said last week it’s facing a temporary vaccine shortage as it awaits further delivery of doses by the manufacturer.

Most of the shipments of Bavarian’s vaccine, known as Jynneos, have gone to the U.S., with several countries still awaiting orders expected to arrive this year and next, according to data compiled by data analytics firm Airfinity. The U.S. has the highest number of cases globally and has received about 88% of Jynneos vaccine doses delivered since May, according to the data. 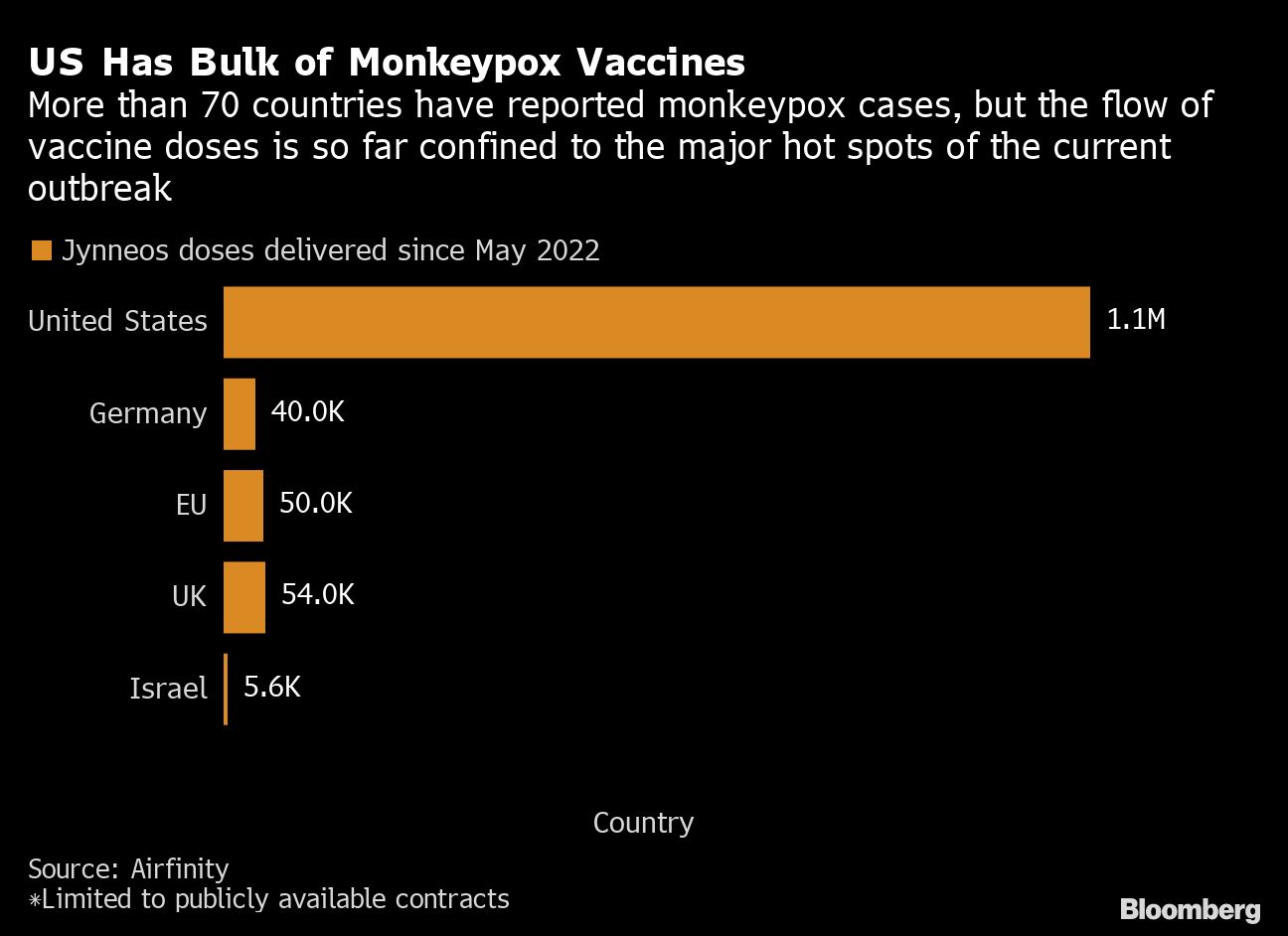 “We’re looking at ways to get help from partners in all the various production steps of the vaccine,” Sorensen said. “We don’t have any concrete negotiations in the works with bulk producers, but we’re investigating and looking at what options there are.”

The WHO is in close contact with vaccine manufacturers, countries and organizations willing to share doses with other places if needed, WHO Director-General Tedros Adhanom Ghebreyesus said during a briefing Wednesday.

Bavarian has raised its financial outlook several times this year as orders have poured in for Jynneos, which was originally developed for smallpox. The company can currently produce 30 million doses annually at its bulk facility based north of Copenhagen. Since the outbreak began in May the company has already doubled its in-house production capacity and expects it to triple by the year end, according to a company spokesperson.

“Bavarian Nordic has been working diligently since the outbreak to expand capacity,” the spokesperson said in an email. “And is rapidly investing in the people, training and technology necessary to scale production.”

Bavarian Chief Executive Officer Paul Chaplin told Danish newspaper Borsen on Wednesday that a possible tech transfer for Jynneos to a U.S. producer could take about three months if the process is sped up, compared with about nine months normally.

The WHO said Jynneos is most protective two weeks after a second dose is administered but noted that questions about the shot’s efficacy remain with limited human data available prior to this outbreak. There are already reports of some breakthrough infections among people who were vaccinated after being exposed to the virus, said Rosamund Lewis, the WHO’s technical lead on monkeypox during a briefing.

“We have known from the beginning this vaccine will not be a silver bullet, that it will not meet all the expectation that’s been put on it,” said Lewis.