Around the world, from Bangladesh to Nepal to Rwanda, vulnerable hotspots have been grappling with stalled COVID-19 vaccination programs as they run out of doses. Many of those shortages can be traced back to a single company: The Serum Institute of India.

The world’s largest vaccine maker, Serum was last year named a top supplier of Covid shots to Covax, the World Health Organization-backed initiative aimed at securing an equitable global rollout. But the Indian company has been dogged by setbacks, from a ban on exports to a factory fire, that have hampered its ability to fill orders.

Covax has pledged to send shots to some 92 countries, but has so far received only 30 million of the minimum 200 million doses it ordered from Serum, which was to provide the bulk of its early supply. Serum’s travails have now become a key illustration of how the effort to inoculate against Covid has failed the developing world, and a cautionary tale for becoming over-reliant on one manufacturer amid a global crisis.

The shortages come as the WHO and public health experts warn that low levels of vaccination in poorer nations could fuel the emergence of dangerous variants and lengthen the global pandemic. Other manufacturers have also had trouble meeting targets or ramping up production of Covid shots, yet Serum’s shortfalls are particularly consequential because Covax and emerging countries were counting on it so heavily.

The company has been unable to send any shots overseas since April, when the Indian government banned Covid vaccine exports amid the country’s devastating second wave. But some of Serum’s problems began long before.

Last year, Serum’s chief executive officer, Adar Poonawalla, pledged that his vaccine producing colossus would churn out 400 million doses of AstraZeneca Plc’s coronavirus shot for low and middle-income countries by the end of 2020. A month into 2021, he said it had manufactured only 70 million shots because the company had been uncertain about when it would receive a license from India and didn’t have enough warehouse space.

A string of nations had also entered into direct contracts with Serum and are now racing to find new suppliers. In Nepal — which is struggling with a severe outbreak that’s even reached the base camp of Mount Everest — the government says it’s received only half of the 2 million shots it ordered directly from Serum, based in the city of Pune in neighboring India. The rest were supposed to arrive by March.

“We are struggling with the shortage of vaccines,” said Tara Nath Pokhrel, the director of the family welfare division at Nepal’s health ministry.

In total, the nation of 28 million people says it’s received only 2.38 million doses: 1 million directly from Serum, another 1 million in grant aid from India, and the rest from Covax. Nepal had been expecting 13 million doses altogether from Covax. But those flows have dried up given Covax was relying heavily on Serum for supply and the Indian company is no longer exporting because of the government restrictions. 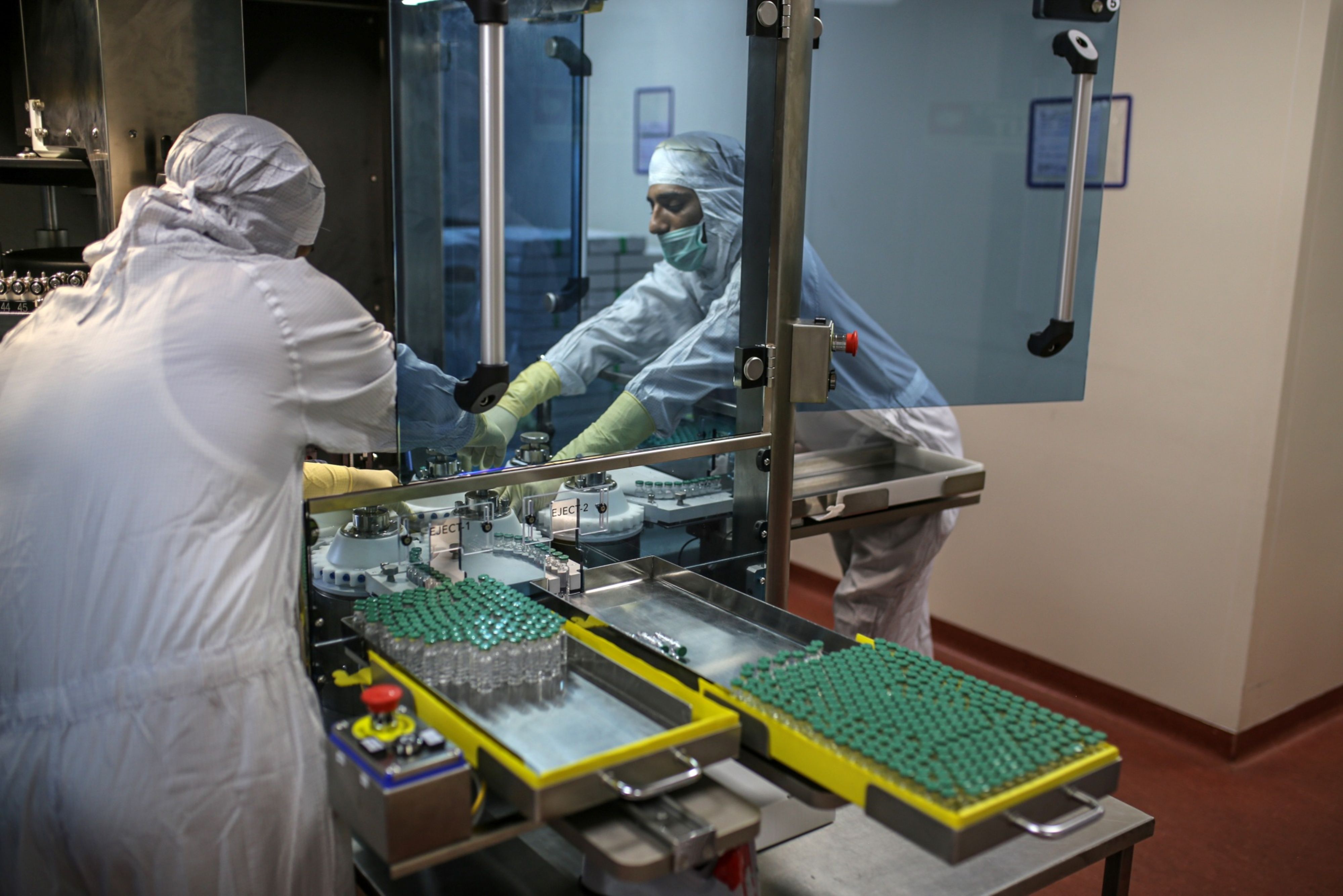 Covishield, the local name for the AstraZeneca vaccine, on the production line. Photo: Bloomberg.

The decision to choose Serum as a major Covax supplier “was based, largely, on the company’s massive production capacity, ability to deliver at low cost and the fact that its vaccine was one of the earliest to gain WHO emergency use listing,” said Seth Berkley, chief executive officer at Gavi, the Vaccine Alliance, which has been facilitating Covax and helping fund its orders.

Berkley says Serum’s manufacturing capacity is now expanding, which will help India. Still, Covax and many developing countries are scrambling to find new sources of vaccines after Serum said in recent weeks that exports are unlikely to resume until the end of 2021 given the needs of its overwhelmed homeland.

It’s a void that could potentially be filled by Chinese vaccine makers, with shots from Sinovac Biotech Ltd. and Sinopharm Group Co. both recently approved for wider global use by the WHO. Bangladesh stopped giving out first vaccination doses after Serum’s supply shortages and then went on to halt its entire campaign. After the arrival of a limited supply of Chinese vaccines from Sinopharm, the South Asian country resumed inoculations for frontline and emergency workers, but is yet to start a mass vaccination program.

Pakistan has also kept its vaccination drive going by securing the majority of its doses from China after Covax delayed deliveries. The nation has received 11.8 million doses so far, the government’s health adviser Faisal Sultan said at a briefing last week.

The situation Serum now finds itself in is a turnaround from a year ago. Then, its owners — the billionaire Poonawalla family, which founded the firm in 1966 to diversify their business away from race-horse breeding — were thrust into the global spotlight after agreeing to mass produce AstraZeneca’s vaccine, which is called Covishield in India.

Serum had long been a supplier of measles and polio inoculations to the developing world and Adar Poonawalla, who became CEO in 2011, reveled in its position at the center of the historic Covid vaccine rollout. In late November, he talked about showing Prime Minister Narendra Modi a third factory at the company’s Pune headquarters which would soon allow the firm to crank out more than a billion Covid shots a year.

Yet, as circumstances shifted, so did Poonawalla’s projections in public forums and to the media.

In an interview in November, he said Serum was aiming to have 100 million doses ready in reserve by the end of December, just a quarter of the amount promised by the end of the year. In January, he lowered that even further to 70 million.

Poonawalla told Bloomberg in early January that the shortfalls were due to a lack of warehouse space to store the vials after slower than anticipated regulatory approvals in India. The company filed their application for an emergency license there in early December. Over recent months Poonawalla has also cited U.S. policies for some of his company’s problems, spearheading complaints against a de-facto American export ban imposed on some crucial vaccine raw materials.

Meanwhile, in January, a fire broke out at one of Serum’s plants. The manufacturer at first downplayed its impact and Poonawalla tweeted that the blaze wouldn’t slow production. But it led to losses of equipment and delays in putting on additional manufacturing lines, curbing expansion, according to a person familiar with the matter who didn’t want to be named discussing internal company business.

Serum didn’t respond to a list of questions from Bloomberg, and a spokesperson said that Poonawalla wasn’t available for an interview.

Within the company, there is frustration over how production has been impacted, the person familiar with Serum’s operations said. One of the main reasons pledges weren’t fulfilled was because the global landscape for Covid vaccines kept changing, with shifts in India’s regulations, approvals and other government controls after each target was announced, the person said. The company’s hands were tied by India’s export ban and other government regulations, the person said.

There have been shortages in India as well. Initially, Serum’s supply challenges weren’t apparent there because the immunization campaign got off to a slow start. Modi’s government was also unclear on how much it would eventually order from Serum, leaving the company with little foresight as to how much capacity was needed.

India’s initial order sheet in January was parsimonious — just 11 million shots at first after Poonawalla attempted to publicly negotiate on pricing with the government. But as the second coronavirus wave swept across the country demand shot up, and supplies started to dwindle.

With its two main suppliers currently stretched, India is relying on a second round of homegrown and imported vaccines to ease that strain. Shots from Biological E., Cadila Healthcare Ltd. and Novavax Inc. may lead to a near three-fold scale-up of the rollout to 271 million doses a month by October, according to estimates from Investec Plc. Modi this week announced free vaccinations for all adults and his administration said it would procure the shots for states.

Serum isn’t the only vaccine maker that’s fallen short of its pledges. AstraZeneca was unable to meet promised targets to the European Union because of production issues. The other company supplying India’s rollout, Bharat Biotech International Ltd., has also only provided about 27 million of a promised 1 billion annual doses of its shot. Russia, which only started shipping batches of Sputnik V to India last month, had said it could begin delivering an order of 100 million doses by December last year.

“All of them have over-promised and that trend continues,” Malini Aisola, the New Delhi-based co-convenor of public health watchdog All India Drug Action Network, said of the country’s vaccine makers. “The demand is so much greater than what the companies can manufacture.”