Global gaps in access to COVID-19 vaccines are raising concerns that the continued spread of the coronavirus will breed more dangerous versions of the pathogen, weakening medical weapons and further crippling economies.

In a race to catch up with emerging coronavirus variants, wealthy countries are already benefiting from potent vaccines. While the U.S., Britain and European Union have given citizens about 24 million doses so far — more than half of the shots administered globally — vast numbers of countries have yet to begin their campaigns.

Disparities in immunity pose a threat to both have and have-not states. Giving the coronavirus an opportunity to advance and generate new mutants would have significant economic and public-health consequences, adding to the pain as the death toll surpasses 2 million.

“We cannot leave parts of the world without access to vaccines because it’s just going to come back to us,” said Charlie Weller, head of vaccines at health research foundation Wellcome. “That puts everyone around the world at risk.”

Countries are relying on effective immunizations to save lives and revive businesses. The World Bank’s projection for 4% growth this year depends on widespread deployment of vaccines. Surging COVID-19 cases and a delay to the delivery of inoculations, however, could limit expansion to just 1.6%.

High-income countries have secured 85% of Pfizer Inc.’s vaccine and all of Moderna Inc.’s, according to London-based research firm Airfinity Ltd. Much of the world will be counting on U.K. drugmaker AstraZeneca Plc, whose vaccine is cheaper and easier to distribute, along with other manufacturers such as China’s Sinovac Biotech Ltd.

At least 49 higher-income countries are rolling out COVID-19 vaccines, compared with one lowest-income nation reporting the first 25 doses, according to World Health Organization Director-General Tedros Adhanom Ghebreyesus. “Not 25 million. Not 25,000. Just 25,” he said at a meeting Monday. A growing number of countries are stepping up their own supply deals, in addition to participating in a global collaboration known as Covax. 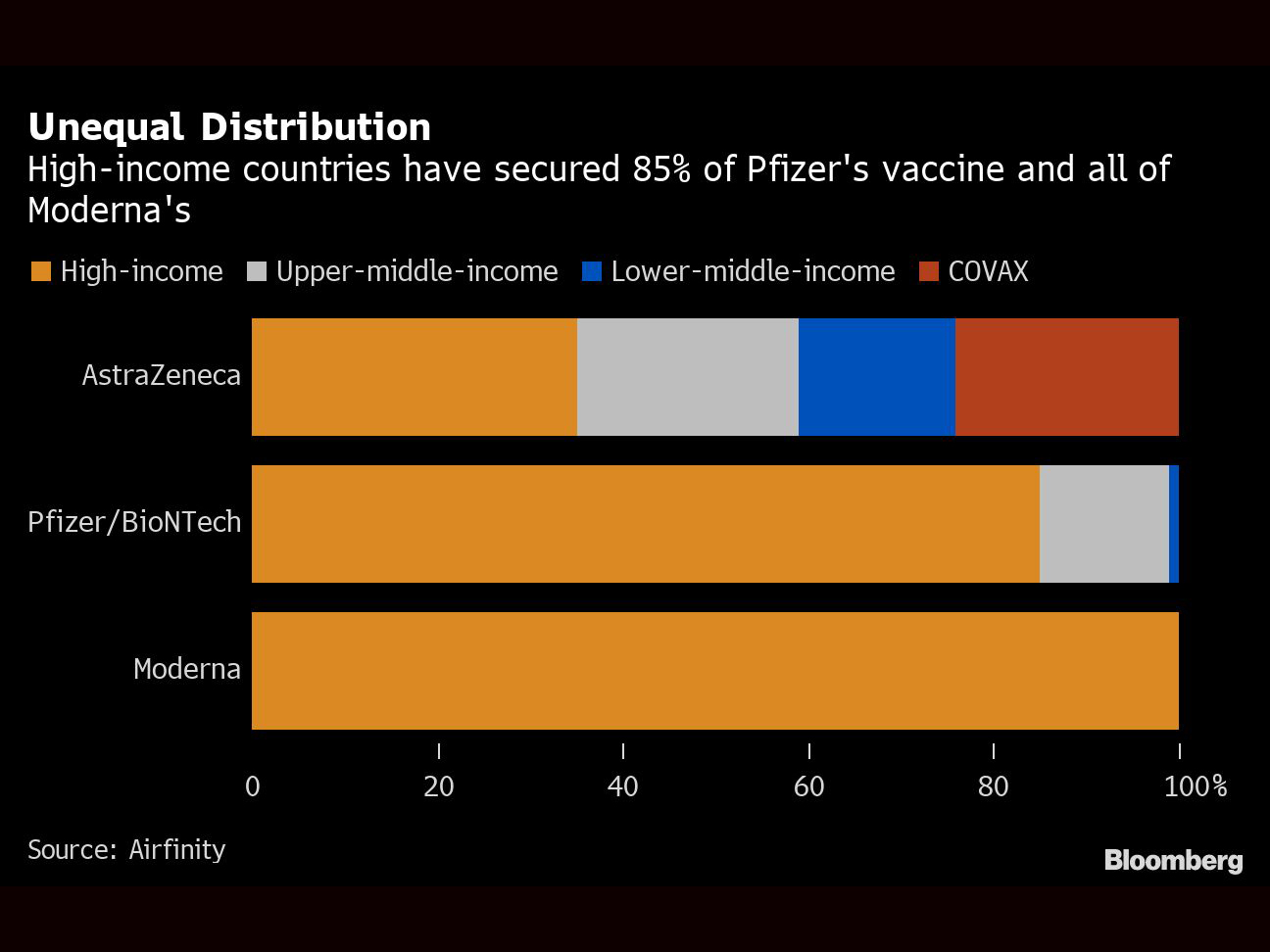 Urgency is increasing as the pandemic extends into a second year. New variants that surfaced in the U.K., South Africa and Brazil appear to spread significantly faster than earlier versions. Just in the past month, a “new dimension of risk has opened up for the world,” said Rajeev Venkayya, president of Takeda Pharmaceutical Co.’s vaccines business.

Reducing deaths and illnesses has been seen as the main driver of delivering vaccines rapidly, said Venkayya, who worked in the George W. Bush administration to develop a U.S. pandemic flu plan and directed vaccine delivery for the Gates Foundation.

“We now understand it’s also very, very important to control transmission,” he said, “not just to protect those most vulnerable populations, but also to reduce the evolutionary risk associated with this virus.”

While there’s no evidence to suggest the current crop of vaccines are ineffective against those variants, future mutants may be less responsive, Wellcome’s Weller said.

Drugmakers say they could tweak their shots to counter new variants within weeks if needed. The likelihood that such adaptations will be necessary has increased, Venkayya said.

“The longer the virus is allowed to continue in different parts of the world where we don’t have a vaccine,” said Anna Marriott, health policy adviser at the anti-poverty group Oxfam, “the greater the danger of new variants that could be more aggressive, more virulent or transmissible.”

COVID-19 shots have been tested for their ability to prevent symptoms, not transmission. Still, their performance in clinical trials gives an indication of how effective they might be against spread.

The rollout of shots from Pfizer-BioNTech SE and Moderna that achieved efficacy levels of about 95% has raised questions about whether everyone will have access to such high levels of protection.

“The gap isn’t just about access to vaccines,” said Yanzhong Huang, senior fellow for global health at the Council on Foreign Relations. “It’s also about access to effective vaccines.”

One of the shots lower- and middle-income countries are relying on, from AstraZeneca and the University of Oxford, sparked worries in Australia that it may not be effective enough to generate herd immunity. Health authorities there, however, said they believe it will be comparable to the Pfizer and Moderna shots in preventing people from getting seriously ill.

The vaccine developed by the U.K. partners, introduced in the country earlier this month, delivered an average efficacy rate of 70%. That appeared to climb to 80% with a longer gap between doses, based on limited data available, according to regulators. Lengthening that period to as many as three months from one allows more people to get protected faster, while data show the level of antibodies also increases, an AstraZeneca spokesman said.

“An optimized regimen which allows the vaccination of many more people upfront, together with a robust supply chain, means we can have a real impact on the pandemic,” he said in an email.

Four vastly differing protection rates have been released on Sinovac’s shot, ranging from about 50% to more than 90%. The Chinese developer said the lower number seen in a trial in Brazil is due to participants being medical workers facing a high risk of contracting COVID-19.

“Despite the difference in efficacy rate, they all point to the vaccine’s ability for protection, especially against mid- and severe disease,” Sinovac said.

While the picture is still coming into focus, cleared vaccines are likely to be similarly effective in preventing serious sickness and death, said Takeda’s Venkayya. Where they could diverge is on side effects, the duration of protection and impact on transmission, an even more critical factor in light of new variants, he said.

Even shots with a lower efficacy level could have a considerable impact. U.S. regulators set a 50% threshold for deeming a candidate effective. But they would require a higher percentage of people willing to get vaccinated to achieve herd immunity, Huang said.

If less-effective vaccines are distributed to emerging markets, it could have significant economic implications, too, and “sharpen differences in pandemic outcomes across countries,” Justin-Damien Guenette, a senior economist at the World Bank, wrote in an email.

Many countries are depending on Covax, which aims to deploy vaccines equitably to every corner of the planet. Yet not all lower- and middle-income nations are waiting for a lifeline. Several have questioned whether the program will get the vaccines it needs, the WHO’s Tedros said. Governments such as South Africa and Malaysia are also pursuing their own supply deals through direct talks with manufacturers, and some regions are set to receive Pfizer’s vaccine as well.

“There seem to be indications that countries are losing patience,” said Huang of the Council on Foreign Relations.

Covax has secured access to almost 2 billion doses, with deliveries due to begin in the first quarter, and set a goal of vaccinating up to a fifth of countries’ populations by the end of the year. That’s far short of the levels of two-thirds or more that many nations are targeting. Some may not get vaccines until 2024, researchers estimate.

The mobilization is ramping up. India, a nation of more than 1.3 billion people, kicked off a massive inoculation drive on Saturday, an effort expected to encounter challenges as it extends into rural areas.

Vaccine advocates have called on rich countries to share while pushing companies to scale up manufacturing capacity. While it’s early, the trends are concerning, Venkayya said.

“Success is defined as getting vaccines to people everywhere,” he said, “and we’re not yet successful in that endeavor.”