Instacart Bets on Robots Over People for the Future of Grocery

Instacart Inc. has an audacious plan to replace its army of gig shoppers with robots — part of a long-term strategy to cut costs and put its relationship with supermarket chains on a sustainable footing.

The plan, detailed in documents reviewed by Bloomberg, involves building automated fulfillment centers around the U.S., where hundreds of robots would fetch boxes of cereal and cans of soup while humans gather produce and deli products. Some facilities would be attached to existing grocery stores while larger standalone centers would process orders for several locations, according to the documents, which were dated July and December.

Despite working on the strategy for more than a year, however, the company has yet to sign up a single supermarket chain. Instacart had planned to begin testing the fulfillment centers later this year, the documents show. But the company has fallen behind schedule, according to people familiar with the situation. And though the documents mention asking several automation providers to build the technology, Instacart hasn’t settled on any, said the people, who requested anonymity to discuss a private matter. In February, the Financial Times reported on elements of the strategy and said Instacart in early 2020 sent out requests for proposals to five robotics companies.

An Instacart spokeswoman said the company was busy buttressing its operations during the pandemic, when it signed up 300,000 new gig workers in a matter of weeks, bringing the current total to more than 500,000. But the delays in getting the automation strategy off the ground could potentially undermine plans to go public this year. Investors know robots will play a critical role in modernizing the $1.4 trillion U.S. grocery industry.

Automation would be a major departure for Instacart, which currently relies on hundreds of thousands of gig workers racing through supermarkets alongside shoppers more inclined to linger and browse. The existing model helped the company become America’s second largest grocery delivery and pickup service after Walmart Inc., signing up 600 retailers with 45,000 stores since its founding almost nine years ago in San Francisco.

But paying all those people to shop is expensive and unsustainable. Delivery fees, price markups and tips add as much as 25% to what shoppers pay for a typical Instacart grocery order, said Marc Wulfraat, president of the logistics consulting firm MWPVL International Inc., essentially making it a boutique service for the affluent.

“There’s a hefty price for this convenience we all love so much,” Wulfraat said.

Automating the operation would cut those costs, let Instacart lower the fees and markups, potentially making the service more accessible to a mass market. The Instacart spokeswoman declined to provide specifics but said the company is “committed to supporting our brick-and-mortar partners and continuing to invest in and explore new tools and technologies that support the needs of their customers and further enable their businesses to grow and scale over the long-term.”

The question is whether Instacart can pull this off before grocers figure out how to do it themselves. In a potentially ominous sign, chains are already starting to bring pieces of their e-commerce operations in-house and partnering with venture-backed upstarts looking to muscle in on Instacart’s turf. Kroger, meanwhile,  opened its first robot-powered fulfillment center in partnership with Britain’s Ocado Group Plc in March.

“Instacart is vulnerable to losing customers,” said Brittain Ladd, a supply-chain consultant whose clients include grocery chains. “I’m not convinced that Instacart’s customers will outsource their online grocery fulfillment. Many grocery retailers want to end the use of third parties to fulfill their online orders.” 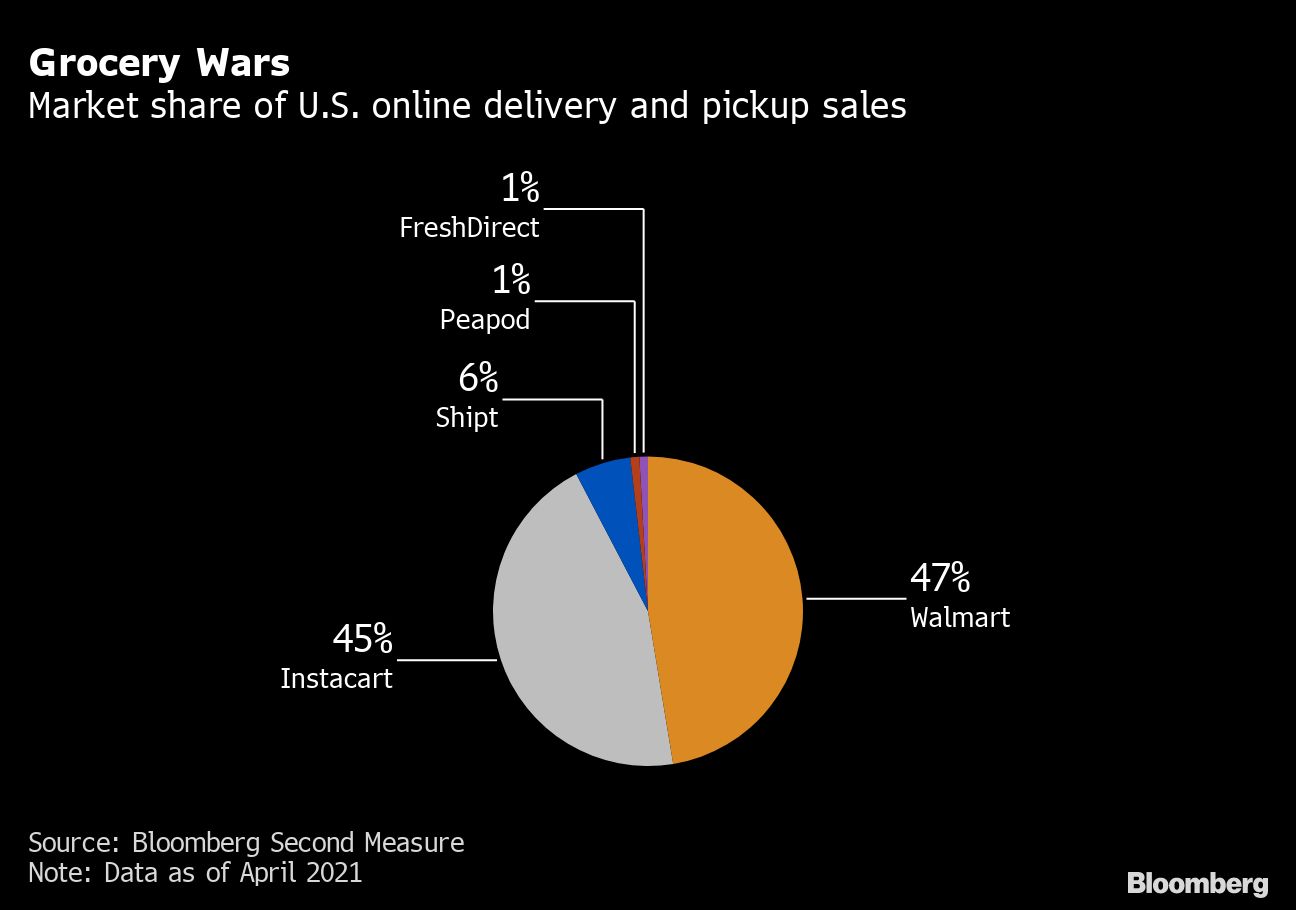 The arrangement between Instacart and the grocery chains has never been more than a stopgap. It has lasted this long only because supermarkets reluctant to embrace the Digital Age needed Instacart’s online ordering platform, millions of customers and delivery drivers. Instacart, meanwhile, needed the supermarkets’ inventory and stores. But the surge in online grocery sales during the pandemic made grocers even less enamored of sharing their revenue with Instacart, say industry analysts, putting pressure on the company to find a better way.

Under one proposal, Instacart would create a network of stand-alone fulfillment centers that would handle more than 3,500 orders a day with more than 100,000 units sold, according to documents reviewed by Bloomberg. More than 700 robots and about 160 people would do the work, with the machines fetching most of the items and workers gathering fresh and perishable food. The installation would cost $20 million, with annual maintenance costs of $380,000 a year. A second option is a smaller 25,000-square foot attached to a store that would handle more than 700 orders a day totaling 22,000 items. It would have more than 150 robots, 40 workers and would cost $6.5 million to set up and $270,000 a year to maintain, according to the documents.

Under the plan, the supermarket chain would forecast demand and handle inventory, while Instacart would process customer orders and line up delivery drivers. A separate technology partner would provide the automation.  The company has been working with the U.K. logistics consulting firm Bis Henderson to evaluate proposals from various robotics outfits and had planned to open the first facilities at the end of this year to test the concept and assess the potential savings, according to the documents.

To proceed, however, Instacart needs buy-in from the grocery industry. The chains aren’t talking, but the documents fail to address one of the industry’s long-time reservations: Instacart’s direct relationship with shoppers. While the company shares some customer data with the supermarket chains, suppliers that have long paid grocers for prominent shelf space are more likely to spend that money to buy digital ads that, say, steer consumers to Instacart rather than the retailer’s website.

Digital advertising has become an important revenue stream for traditional retailers like Walmart, Target Corp. and Kroger Co., which are keen to grab some of the web spending that Facebook Inc., Google and Amazon.com Inc. now largely gobble up. Losing those dollars to Instacart is another source of retailers’ frustration with the current relationship.

So several chains are looking to reduce their reliance on Instacart.

In recent years, a host of online grocery startups have emerged, fueled by a gusher of funding from venture firms. In the first three months of 2021, investors anted up $6 billion in 25 deals, according to PitchBook, already surpassing last year’s total. As startups proliferate, they’re introducing new business models with more favorable terms for grocers, further enticing them to wean themselves off of Instacart.

Cub Foods, with 79 grocery stores in Minnesota and Illinois, is working with Capstone Logistics and ThryveAI to add beer, wine and spirits to its online service. The Giant Eagle chain, meanwhile, is working with FlyBuy Pickup, part of software company Radius Networks, to help expand its curbside pickup service by using so-called dark stores set up for online orders only with no customers allowed inside. United Supermarkets, a chain of roughly 100 stores in Texas and New Mexico owned by Albertsons Cos. Inc., is working with Texas-based Delivery Solutions to offer shopping from its own website while still selling via Instacart.

“We’ve become the Instacart-hedge strategy,” said Manil Uppal, founder of Delivery Solutions, whose grocery clients include Giant Eagle, Loblaw and Wakefern Food Corp., parent of the ShopRite chain. “Instacart marketplace won’t go away, but every grocer at a minimum will have an alternative e-commerce strategy that will include delivery.”

No one is predicting a sudden abandonment of Instacart, which has been tweaking its model to keep supermarket chains on board. For example, the company also provides online storefronts that direct traffic through grocers’ websites, rather than the Instacart app, letting them reclaim a connection to customers. Depending on a supermarket’s needs, the service offers a menu of options, including delivery fulfillment and help with apps and loyalty rewards platforms. More than 175 grocers including Costco Wholesale Corp., Publix Supermarkets Inc. and Wegmans Food Markets Inc. have signed on to the service.

Industry executives remain cautious, more likely to expand through acquisitions than plow resources into e-commerce. They’re also waiting to see if the pandemic-fueled bump in online sales will endure and are bracing for Americans to buy less fresh food now that they’re eating out again. Even if traditional chains do opt for their own online operations, it will take time to build the technology and retrain employees.

As Instacart prepares for an IPO, its executives can point to sizable achievements. After picking up millions of new customers during the pandemic, the company had 45% of the market as of April, according to Bloomberg Second Measure data. Instacart is accessible to 85% of U.S. households. A $265 million funding round in March valued the company at $39 billion.

But unless Instacart can come to an accommodation with the industry, it could be gradually squeezed out.

Said Pitchbook Senior Analyst Asad Hussain: “Investors will be looking to see if Instacart can find ways to stay ahead of the curve.”