Whether yoga pants and Air Jordans appear under Christmas trees in the U.S. and Europe may come down to Vietnamese assembly line workers like Le Thi My.

My is part of an exodus of factory employees who have gone back to their home villages from Vietnam’s southern industrial belt, the epicenter of the nation’s worst coronavirus outbreak. Millions more are poised to follow, as months-long mobility restrictions that confined workers to cramped housing recently eased.

“We had almost nothing left but fear,” said My, who is back in her home in Tay Ninh Province along the Cambodian border after leaving Ho Chi Minh City. “We saw many people die of Covid in our neighborhood.”

The flight from Vietnam’s industrial heartland in the south — with the government estimating over 2 million may vacate — followed an increasingly strict lockdown that started in July to combat the delta variant. Factories slowed or closed, wiping out months of production for companies such as Nike Inc. and exacerbating problems in a global supply chain already in disarray.

Now staff-starved companies are imploring workers like My to return for what would normally be peak production for winter clothing and Christmas gifts. The government is offering transportation back and companies are upping pay and benefits, but little is working.

“This is uncharted water,” said Camilo Lyon, an analyst for BTIG who estimated Nike’s output alone has already been reduced by 180 million pairs of shoes. “No one understands how quickly, or slowly, the ramp-up in production will be.”

While small, Vietnam plays an out-sized role in the global consumer economy, supplying everything from Walmart Inc. furniture and Adidas AG sneakers to Samsung Electronics Co. smartphones. After China, it’s the second-largest supplier of clothes and shoes to the U.S., according to the American Apparel and Footwear Association. Its importance increased during the trade war between the U.S. and China as manufacturing moved there to avoid tariffs. 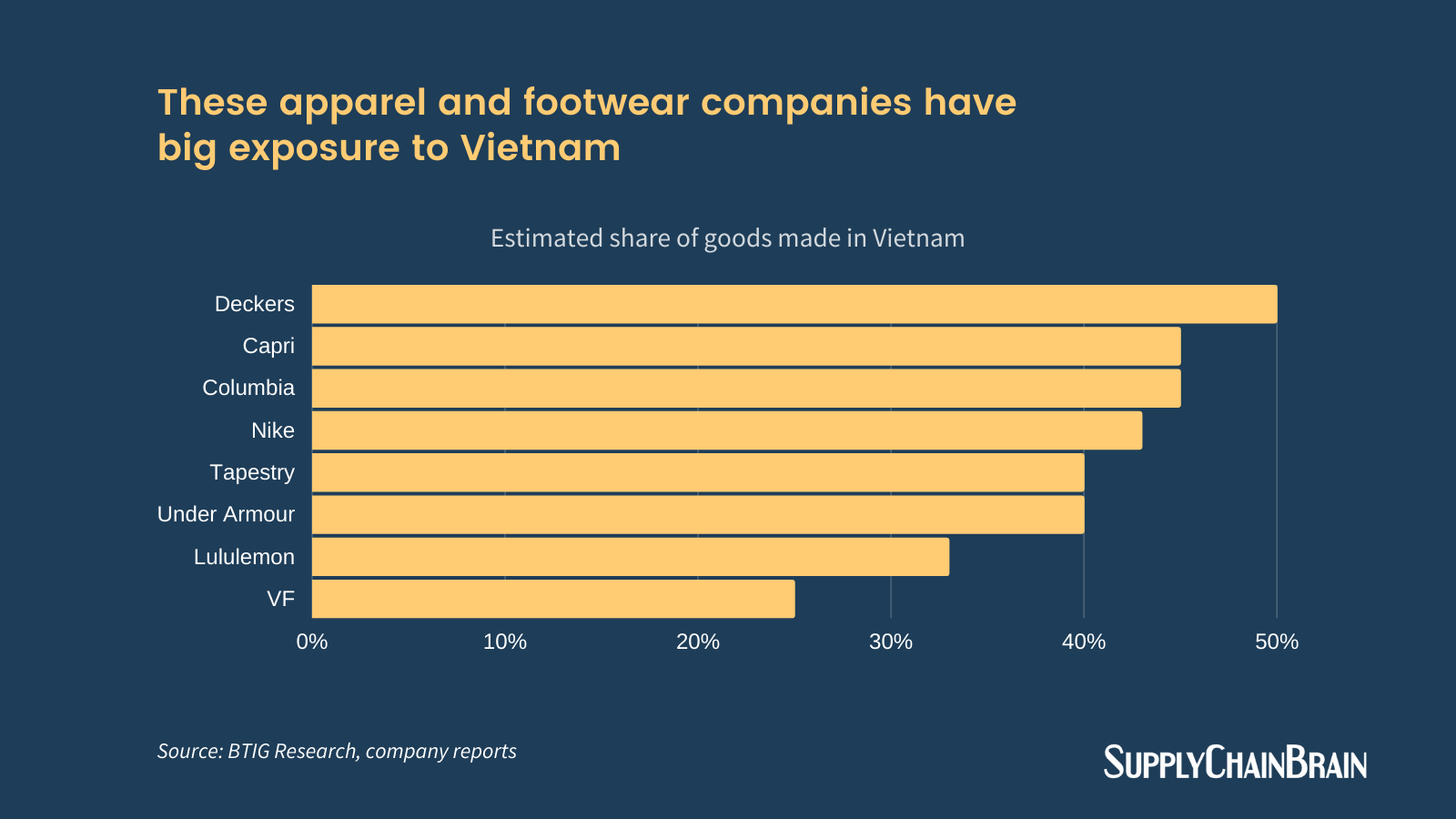 At this point, there is little brands like Nike, which recently cut its sales forecast largely on the lack of goods from Vietnam, can do. Factories in other countries are overloaded with orders, and it would take months to train workers and move machinery.

The missed production will be especially apparent at retailers in December and extend well into the first quarter, according to Lyon, who projected that output from Vietnam wouldn’t normalize until the middle of 2022. The full impact of this upheaval hasn’t been priced into the stocks of apparel and footwear companies with big exposure to Vietnam, he said.

“The challenges are by no means over,” Lyon said.

The factory shutdowns could also affect tech companies such as Apple Inc., which may see disruptions to deliveries of the iPhone 13 due to closures at component suppliers. A Samsung Electronics unit that makes household electrical appliances in Vietnam said it expects to meet export targets if it can quickly return to normal operations.

Vietnam contained Covid last year, giving its people a false sense that the country had dodged the pandemic. But the delta variant struck hard in the spring, bringing the harsh realities of the virus that much of the world had experienced a year earlier. Cases and deaths surged, including more than 15,000 in Ho Chi Minh City over the summer.

That prompted authorities to impose severe restrictions, such as bans on shopping for food and curfews. Factories were instructed to establish on-site accommodations — essentially forcing employees who want to work to live in tents — or temporarily shut down. This left many workers who remained with no paychecks for months, dwindling savings and reliant on government food packages delivered by soldiers.

Instead of isolating themselves at makeshift factory lodging, or staying in the area without paychecks, many workers returned to their home provinces. The lifting of some restrictions in Ho Chi Minh City and surrounding provinces earlier this month only further motivated those who hadn’t yet left to do so.

Adding to the fear is that Vietnam has one of the lowest vaccination rates in Southeast Asia. About 14% of its 98 million people are fully vaccinated. The American Apparel and Footwear Association has lobbied the Biden administration to donate more vaccines to the country.

Out of desperation, local authorities have been sending text messages to workers to convince them to return. They’re also chartering buses to bring them back from their home provinces.

Tran Thi Hoa, a 31-year-old mother of two, has so far ignored these pleas. She has no immediate plans to return to her job in Ho Chi Minh City, where she made about $350 a month stitching clothing.

“I can’t bring my family back to the city now, as it’s still too risky,” Hoa said from Vinh Long, a province in the Mekong Delta where she now lives with her children and husband, an out-of-work motorbike taxi driver. “As the woman of the house, I’ve got to think of my family first.”

With restrictions easing at the beginning of the month, production is increasing at some factories. Pouyuen Vietnam, a unit of Taiwan’s Pou Chen Corp., the world’s largest athletic shoe manufacturer, resumed production on Oct. 6 with no more than 30% of its workers, according to Vietnamese news website Zing. More than 40,000 workers have not returned, and the company may fail to reach its goal to operate at full capacity by mid-November.

There are signs that the situation may be improving, however. Industrial parks and export processing zones in Ho Chi Minh City reported that about 57% of workers had returned as of Oct. 6, up from 24% before the relaxing of restrictions, according to the city’s media center.

Though the pandemic is starting to ease — daily new cases this month have fallen to about 5,000 on average from 10,800 in September — the country needs to continue accelerating its vaccination program. The government has said that it hopes to fully vaccinate 70% of adults by the end of March.

For now, even the offer of free meals at work and a pay bump isn’t enough to entice Hoa back to work.

“I feel sorry if someone in the U.S. can’t get her husband or her kids some new clothes for Christmas,” Hoa said. “But I can’t leave my family here either.”