After losing her son to COVID-19 last year, 79-year-old Tomasa Valdez was desperate to get vaccinated. But on the remote Philippine island of San Salvador, where she lives, there were no shots to be had.

Getting to the mainland, where vaccines were available, meant a boat ride that was arduous at her age and expensive given Valdez’s meager income from drying sea grass which she sells for less than 100 pesos ($1.95) a sack. Help only arrived in December 2021 — 10 months after the Philippines began its national Covid vaccination program and about a year after Western nations like the U.S. and U.K. started theirs.

Even then, health workers had to travel via a wooden motorized boat, ferrying heavy vaccine storage equipment across the choppy South China Sea. “Vaccines really have to be brought closer to the people, not the other way around,” said Noel Bueno, the doctor who inoculated Valdez.

While lack of supply was the biggest threat initially to the vaccination programs of developing nations, now it’s logistics.

Places like the Philippines are now struggling to get shots into the arms of their citizens, millions of whom live on distant archipelagos or far-flung mountain tops, under-served by roads, transport and basic infrastructure. Developed countries are getting to the point where they are choosing to live with Covid and treat it as endemic, their hospital systems insulated by higher vaccination rates. But logistical issues continue to bedevil the rollouts of poorer countries, becoming one of the world’s biggest public health challenges as the pandemic enters into its third year.

The Philippines has one of Asia’s lowest vaccination rates, with only about half of its population receiving two shots, according to the Bloomberg Vaccine Tracker. Its limited and costly testing apparatus, fragmented tracing program and fragile health system have made it hard to stamp out outbreaks despite several economically devastating lockdowns. In recent days, the country has posted record daily case increases, potentially due to the spread of the ultra-contagious omicron strain.

The hurdles that developing nations face in widening the reach of their inoculation programs — which can extend beyond logistics to issues of vaccine hesitancy and social media rumors — are likely to stymie global efforts to contain the virus. New strains can proliferate in under-vaccinated populations and lengthen the pandemic as the emergence and spread of the delta and omicron variants in India and Africa have shown. 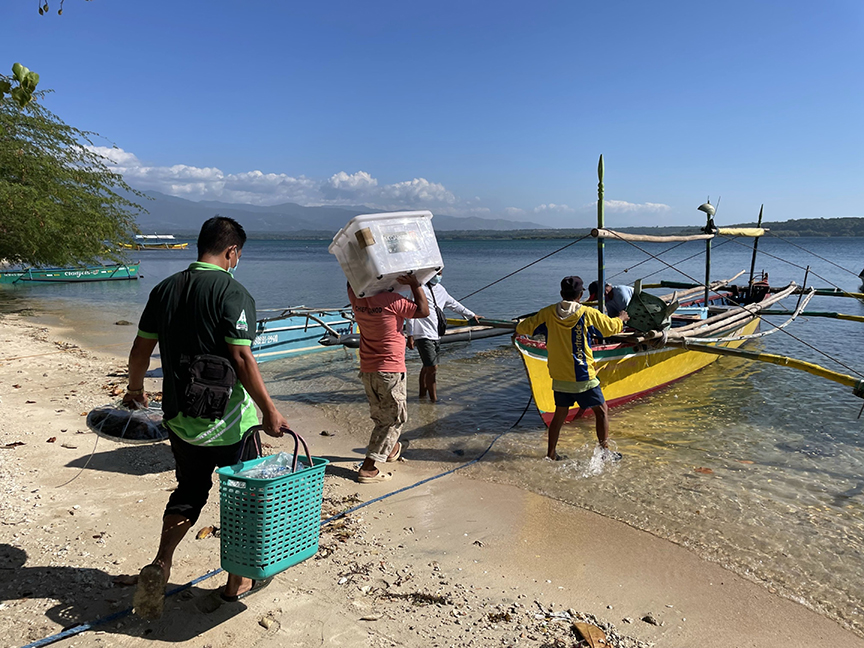 Staff members load COVID-19 vaccine equipment onto a boat during a vaccine drive in San Salvador.

Developing nations face a “combination of challenges in hard infrastructure in the form of trucks, freezers but also soft infrastructure in the form of logistics staff, vaccine administrators, and adequate planning,” said Prashant Yadav, a senior fellow at the Washington and London-based Center for Global Development, who specializes in supply chains. “But these are all surmountable barriers and we have managed to overcome them for the Ebola vaccine, and many other outbreak vaccines.”

While the U.S. government and international agencies have begun efforts to support developing countries, more high-income countries need to step in, he said. “Remote regions have poorer health-care infrastructure in terms of oxygen, ICU beds so if someone does get severe Covid the ability to treat them is weaker,” Yadav said. “From that standpoint it becomes important to reach remote areas early.”

To help address these logistical woes, the U.S., through its Agency for International Development, pledged $315 million for mobile vaccination sites for hard-to-reach rural areas, and to invest in cold-storage facilities.

For much of last year, developing nations faced difficulty getting access to the most effective vaccines, which were initially hoarded by Western countries for their own use. The Philippines first relied on shots from China’s Sinovac Biotech Ltd., which have been shown to be less potent than the mRNA shots being used in the U.S., particularly against the omicron variant.

But in recent months, many of its supply problems have eased and the Philippines now has a stockpile of shots. More mRNA vaccines from Pfizer Inc. and Moderna Inc. are now being administered in the Southeast Asian country, particularly to young people. But its logistical challenges have lingered.

Other low- and middle-income nations are grappling with challenges of their own. In Asia, India is pushing to get shots to its vast, impoverished countryside, while Indonesia’s vaccine drive is hampered by the difficulty of reaching people spread across its thousands of islands.

In sub-Saharan Africa, poor trade and transport infrastructure could destroy vaccines, and further derail the region’s already slow shot rollout, the African Development Bank’s chief research economist Eugene Bempong Nyantakyi and Professor Jonathan Munemo from Salisbury University in Maryland have said. Only around 8% of Africans were fully vaccinated as of late last year.

“No journey is more critical to determining the fate of a pandemic than the distance a vaccine must travel from the production line to a person’s arm,” the researchers said in a report published on the International Monetary Fund’s website late last year. “In sub-Saharan Africa, the last mile of this important race is all-important.”

Nations from Asia to Africa are attempting to get creative and stretch their limited budgets to bring vaccines to isolated areas. The government in Ghana partnered with a startup to use drones to ferry tens of thousands of Pfizer-BioNTech shots to its remote countryside.

In Malawi, where less than 5% of the population is fully vaccinated, health workers drive vans from UNICEF to bring shots to remote rural areas.

Back in the Philippines, local officials in the central city of Tacloban are now dangling 100-peso transportation fares for those from remote areas who have to travel to get vaccinated, Vice Mayor Jerry Yaokasin said over the phone. The country is also pushing to expand vaccine coverage to boost a fragile economic recovery, with plans to set up more vaccination sites in pharmacies. It will also deploy more government personnel to its distant southern islands.

Despite delays, residents from isolated areas like sea-grass merchant Valdez are thankful for these efforts.

“I can finally walk along the shore to collect sea grass, without having to worry about getting very sick from Covid,” she said, smiling as she finally held her vaccine card, more than two months after her son’s death.