The White House raced Thursday to show it’s trying to ease a national baby formula shortage, as Republicans showered criticism on President Joe Biden for a crisis that has left frantic parents scouring store shelves to feed their children.

Biden spoke with formula manufacturers, including Reckitt Benckiser Group PLC and Gerber Products Co., and retailers including Walmart Inc and Target Corp and announced new actions intended to increase supply. The administration is asking more states to relax rules on sizes and types of formulas eligible for government benefits, allowing parents to use subsidies for whatever products are in stock.

The White House also called on the Federal Trade Commission and state attorneys general to crack down on price gouging, and said the Food and Drug Administration would in coming days announce new steps that should speed imports of formula from Mexico, Chile, Ireland and the Netherlands.

Biden told reporters Thursday he had spent “hours on the phone” discussing the crisis. He pledged to work with companies to identify ways the administration could help maintain 24/7 production, as well as how the government could help retailers move product to communities in need, the White House said in a statement.

Congressional Republicans assailed the president and the FDA, saying the agency has been slow to respond to the shortage and stingy with information.

The late addition to the president’s schedule on Thursday underscored the extent to which the predicament — months in the making — has become a political liability. News stories this week have highlighted the plight of anguished parents who have taken to rationing their children’s food and spending hours on the hunt for scarce cans of specialty formula.

The shortage started with supply chain issues during the pandemic. It was exacerbated by a recall stemming from a September complaint, when formula made by Abbott Laboratories was first linked to a case of a rare bacterial infection. The FDA didn’t inspect the factory linked to the tainted formula until four months later, after which Abbott recalled the food and shut down production.

The White House said that about 5,000 children nationwide rely on specialty infant formula, and that Abbott was the only supplier for some of the varieties.

Senate Republican leader Mitch McConnell on Thursday charged that the FDA “has been asleep at the switch in terms of getting production back online.”

“This outrageous, unacceptable situation has been unfolding in slow motion over several months,” McConnell said, adding that senators from both parties have asked the White House and the FDA for answers “and gotten very few.”

Coupled with pandemic-related supply chain logjams, the production loss led to shortages at stores, made worse by hoarding by worried parents. The FDA says that formula purchases were higher in April than in the month before the recall, which started in February.

The political risk is acute for Democrats. The shortage of products considered a staple of American life — and vital to many new parents and their babies — may raise fresh doubts among voters about the competency of Biden’s government.

About 43% of baby formula is presently out of stock nationwide, according to figures for the week ending May 8 released by retail-tracking firm Datasembly.

In eight U.S. states — including Nevada and Arizona, where Democratic senators face tough re-election contests — formula is more than half out of stock. And the White House’s capacity to quickly refill shelves is limited, as manufacturers say it will be several weeks before production returns to normal. 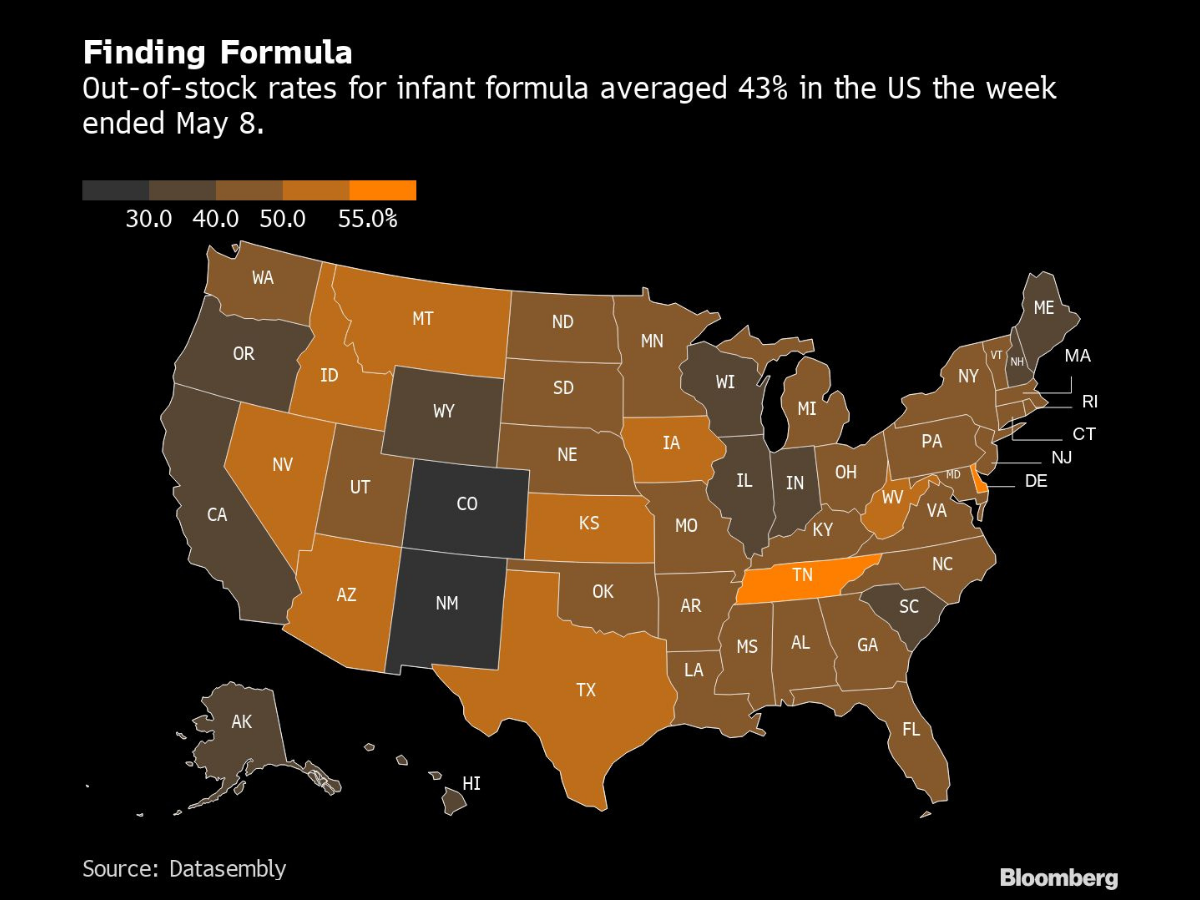 The shortage has affected major brands of formula as well as specialty products that are vital for older children with metabolic disorders.

Stefanik said the FDA didn’t respond to her warnings in February that the administration should develop a plan to address Abbott’s recall of formula made at its Sturgis, Michigan, factory.

“I cannot think of a more harrowing, panicked crisis for parents to face than desperately trying to find food and formula for their newborn babies,” she said. “We as House Republicans continue to demand answers from the FDA.”

One vulnerable Democratic lawmaker, Representative Abigail Spanberger of Virginia, said in a tweet that she had spoken with White House Chief of Staff Ron Klain on Wednesday “about the urgency of the baby formula shortage.”

“We discussed tariff relief, initiating new and immediate imports, and the possibility of using the DPA,” she said, referring to the Defense Production Act that allows the administration to nationalize industry for emergencies. “Quick action is needed, and the White House must take decisive action.”

Infant formula manufacturers must follow strict standards and setting up a new facility to make the food would take more than a flip of a switch. Because formula is often the sole source of nutrition for a vulnerable population, the FDA reviews the ingredients and production process for any new formula or changes to established formulas, including where they are made.

The agency has said it’s attempting to expedite that process. The White House didn’t announce any action related to the DPA on Thursday.

The FDA was first notified in September by Minnesota health officials of a case of cronobacter — a bacterial infection that can be deadly to infants — linked to formula.

Three more cases were reported over the next few months, yet the agency didn’t send inspectors to the Michigan facility until the end of January. Abbott recalled its Similac, Alimentum and EleCare brands in February in the middle of the inspection, and halted operations after FDA determined violations at the plant put infant formula safety in jeopardy.

The FDA has not explained the delay before the plant inspection, but has said it will review its practices regarding illnesses and recalls related to infant formula after the immediate public health risk is addressed.

The White House said that manufacturers had pledged in their conversation with the president to continue stepped up production in the coming weeks. And, officials said, more infant formula was produced in the last four weeks than in the four weeks preceding the recall, even with the Michigan facility offline.

And Biden sent a letter Thursday evening to the FTC asking they “further examine whether there is price gouging in infant formula occurring, thoroughly investigate complaints brought to you through channels such as your fraud hotline, and that you bring all of the commission’s tools to bear if you uncover any wrongdoing.”

The FDA on Tuesday said it was talking with formula manufacturers to assess supply and help bolster production, asking retailers to limit purchases to prevent hoarding and making it easier for imports to enter the U.S. from foreign factories with good track records.

Former Representative Abby Finkenauer, a Democrat running for Senate in Iowa, has called on Biden to add baby formula to the list of items covered by the 1950 Defense Production Act — the same authority wielded by Harry Truman to make steel for the Korean War and Donald Trump to spur mask production during the coronavirus pandemic.

A White House official, asked about the possibility of using the DPA, said the administration would explore every available option, but felt assured companies were at production levels ahead of where they were before the recall. The official, who briefed reporters on actions the administration were taking on the condition of anonymity, said the White House had been actively working on the issue since mid February, including discussions with retailers to impose purchase limits.

Manufacturers have warned that relief could be weeks away.

Abbott said that it would take two weeks to restart operations at its Michigan factory once the FDA signs off on reopening the plant. It will take six to eight weeks to get new product on shelves, the company said.

Congressional Democrats said Wednesday that they planned to hold a hearing on the formula shortage later this month, and Energy and Commerce Committee Chairman Frank Pallone, a New Jersey Democrat, said he planned to meet with the FDA “to try to determine what they can do better.”

“We’re looking to see if we need to have legislation, have a hearing, and see what can be done to increase the amount of formula available,” he told reporters.