Hong Kong’s exports plunged in July as disruptions along the border with China and cooling demand across the global economy weighed heavily on trade.

Overall exports plummeted 8.9% in July, compared to a year earlier, the Census and Statistics Department said Aug. 25. That missed economists’ predictions for a 4.8% fall and was the third consecutive month of declines. It was the worst export performance since March, when COVID-19 lockdowns in China hurt the flow of goods. 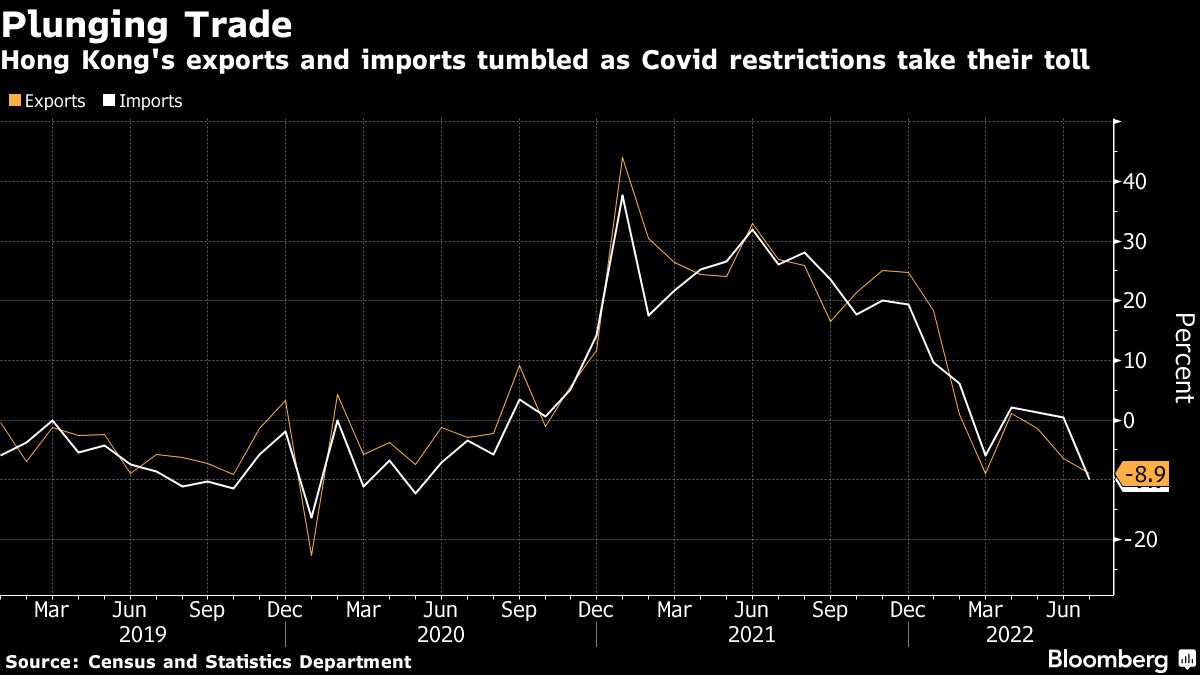 Hong Kong’s exports have been weighed down for months by interruptions to trade with China, as strict COVID restrictions have hamstrung logistics and supply chains. The financial and commerce hub is also grappling with global inflation and tightening monetary policy, as the city has been forced to follow the hawkish Federal Reserve in several rate hikes to maintain the local dollar’s peg to the U.S. dollar.

The government attributed July’s poor showing to a worsening external environment, ongoing disruptions on the border with the mainland, and interest rate hikes in a news release accompanying the data. Exports to China fell 10.7%, while shipments to the U.S. dropped 15.8% and those to the UK declined 29.2%.

“Looking forward, Hong Kong’s export performance will continue to be dragged by the weakening global growth momentum,” a government spokesman was quoted as saying in the release. The spokesman said aggressive monetary policy tightening in advanced economies to curb inflation will also weigh on global demand, as will “geopolitical tensions” and “pandemic-induced supply-chain disruptions.”

The sluggish trade outlook has also contributed to the city cutting its economic growth forecast for the year, revising the outlook to a range of -0.5% to 0.5%. Officials attributed the downgraded expectations to sharply deteriorating global economic prospects and worse-than-expected activity in Hong Kong in the first half of the year.

The relaxation of some COVID-related quarantine and social distancing restrictions could boost momentum in the second half of the year, but the rising number of cases may undermine that.