American Factories Heat Up as CEOs Take Production Out of China

There has been a sense in financial circles that the fever among American executives to shorten supply lines and bring production back home would prove short-lived. As soon as the pandemic started to fade, so too would the fad, the thinking went.

And yet, two years in, not only is the trend still alive, it appears to be rapidly accelerating.

Rattled by the most recent wave of strict Covid lockdowns in China, the long-time manufacturing hub of choice for multinationals, CEOs have been highlighting plans to relocate production — using the buzzwords onshoring, reshoring or nearshoring — at a greater clip this year than they even did in the first six months of the pandemic, according to a review of earnings call and conference presentations transcribed by Bloomberg. (Compared to pre-pandemic periods, these references are up over 1,000%.) 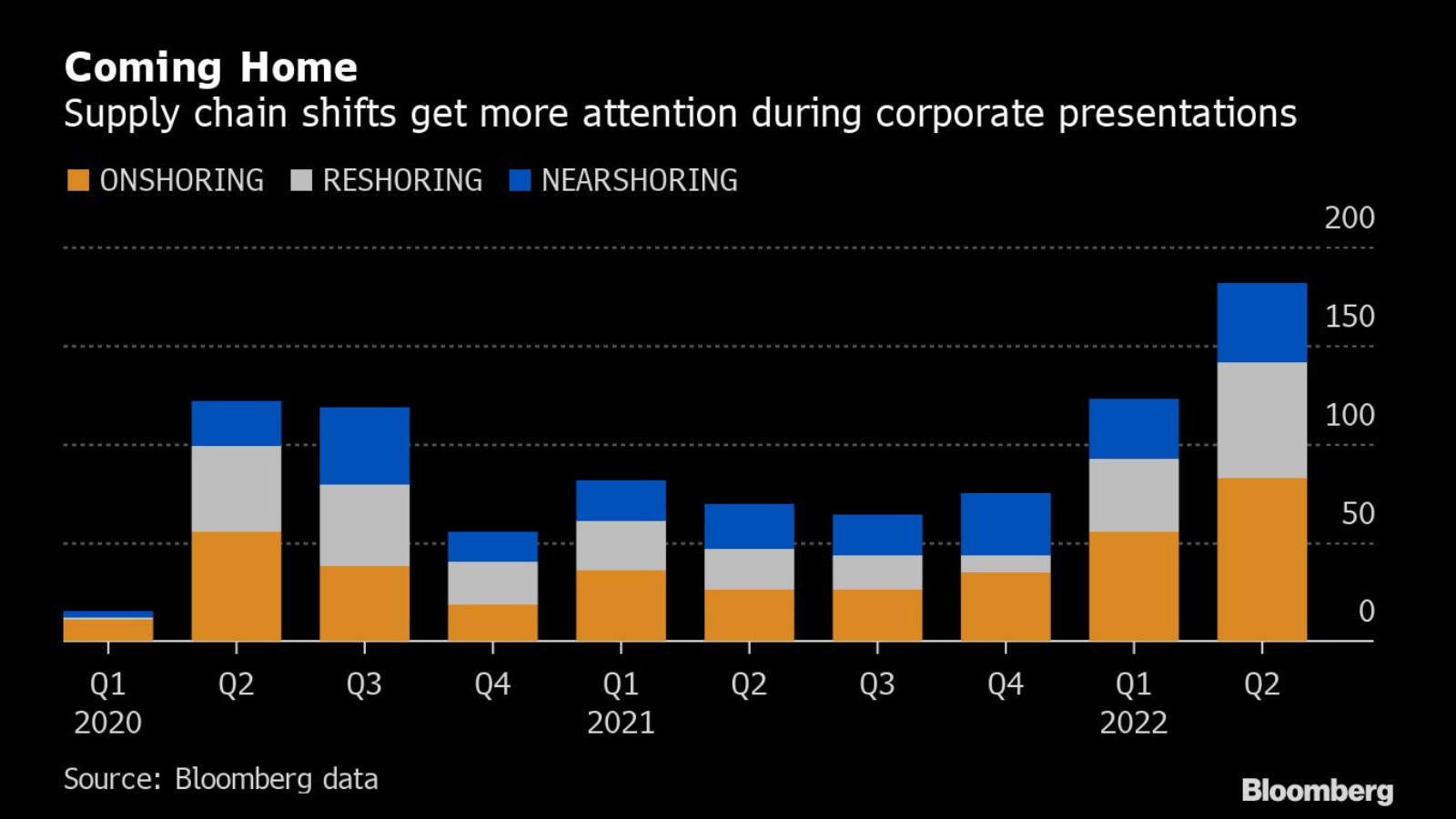 More importantly, there are concrete signs that many of them are acting on these plans.

The construction of new manufacturing facilities in the U.S. has soared 116% over the past year, dwarfing the 10% gain on all building projects combined, according to Dodge Construction Network. There are massive chip factories going up in Phoenix: Intel is building two just outside the city; Taiwan Semiconductor Manufacturing is constructing one in it. And aluminum and steel plants that are being erected all across the south: in Bay Minette, Alabama (Novelis); in Osceola, Arkansas (US Steel); and in Brandenburg, Kentucky (Nucor). Up near Buffalo, all this new semiconductor and steel output is fueling orders for air compressors that will be cranked out at an Ingersoll Rand plant that had been shuttered for years.

Scores of smaller companies are making similar moves, according to Richard Branch, the chief economist at Dodge. Not all are examples of reshoring. Some are designed to expand capacity. But they all point to the same thing — a major re-assessment of supply chains in the wake of port bottlenecks, parts shortages and skyrocketing shipping costs that have wreaked havoc on corporate budgets in the U.S. and across the globe.

In the past, says Chris Snyder, an industrials analyst at UBS, it was as simple as “if we need a new facility, it’s going in China.” Now, he says, “this is being thought through in a way that has never been done before.”

In January, a UBS survey of C-suite executives revealed the magnitude of this shift. More than 90% of those surveyed said they either were in the process of moving production out of China or had plans to do so. And about 80% said they were considering bringing some of it back to the U.S. (Mexico has also become a popular choice.)

This is, of course, a nascent trend. And so many manufacturing jobs were lost here over so many decades — about 8 million from peak to trough — that almost no one would argue that the current trend marks a return to those halcyon times. The rise of automation, which has eliminated many low-skilled, low-paid jobs, means U.S. factories today require a much smaller group of workers.

What’s more, the soaring U.S. dollar threatens to curtail the whole thing just as it’s beginning. As the dollar surges against the yuan, yen, pound and euro, it becomes costlier to make goods in the U.S. rather than in those countries.

To Kevin Nolan, the CEO at GE Appliances, all this fretting about high costs in the U.S. is overdone.

It has been for years, he says. Around 2008, he came to realize that on large items — like, say, dishwasher size and up — the savings earned by eliminating overseas shipping could outweigh the extra money spent on labor here. The key, he determined, was to wring maximum efficiency out of the factory floor to keep those labor costs down. A year later, he decided to test the thesis out and moved some of GE’s water-heater production to Louisville. Other product lines followed.

It’s all been such a success for the company — which is now, ironically, owned by China’s Haier Smart Home — that Nolan has been waiting for other CEOs to follow his move. It took a pandemic to convince them to do it.

“I’ve always said, this is just economics, people are going to realize that the savings they thought they had aren’t real,” Nolan said in an interview, “and it’s going to be better and cheaper to make them here.”

For some companies, the first nudge they got to revamp their supply chain lines came two years before Covid, when then-President Donald Trump began slapping tariffs on Chinese products again and again.

Generac Holdings, a maker of power generators, started mapping out plans to shift some production from China, and when the pandemic hit, those plans got supercharged. The company now gets more of its parts from suppliers in the U.S. and Mexico, produces more generators near its headquarters outside Milwaukee and runs a brand new plant in a small town just north of Augusta, Georgia.

“We wanted to be closer to our customers in the southeast,” said Chief Operations Officer Tom Pettit. Low shipping costs and quick delivery times are proving a hit with clients and paving the way for the company to keep growing, he said. Opened just a year ago, expansion work on the plant is already underway.

Not just because the war further snarled global trade and added to the surge in freight costs but because it reminded him that China could try something similar in Taiwan. And in the same way that business ended for most Western companies in Russia, so too it could end in China. Suddenly, that benign geopolitical backdrop that had helped encourage so many executives to globalize their operations over the past few decades was vanishing. And this, Pettit said, added to his sense of urgency to change things up.

“President Xi Jinping has not been shy about wanting to reunify China and Taiwan,” Pettit said. “We still think China is incredibly competitive. However, we need to have dual sources outside of China.”