Home » Walmart, Gap and Others Amass $45 Billion in Extra Stuff to Sell

Walmart, Gap and Others Amass $45 Billion in Extra Stuff to Sell

Big retailers rushed to build up inventories last year amid soaring consumer demand and transportation bottlenecks — going so far in some cases as to rent their own cargo ships. Now, they’re trying to figure out how to sell all their stuff.

Inventories rose $44.8 billion for companies on S&P consumer indexes with a market value of at least $1 billion that reported earnings over the last two weeks, according to data compiled by Bloomberg. That’s up 26% from this time last year. The glut dented profits at some retailers, with Walmart Inc. paying more for storage and Target Corp. and Gap Inc. cutting prices on key goods.

It’s far from clear what comes next. In the past, ballooning retail inventories have signaled economic slowdowns or recessions as shoppers bought less. But consumer spending in April climbed at the quickest pace in three months after adjusting for inflation, the Commerce Department said Friday. As long as Americans keep shopping, well-stocked warehouses could buoy retailers if port congestion worsens this summer. 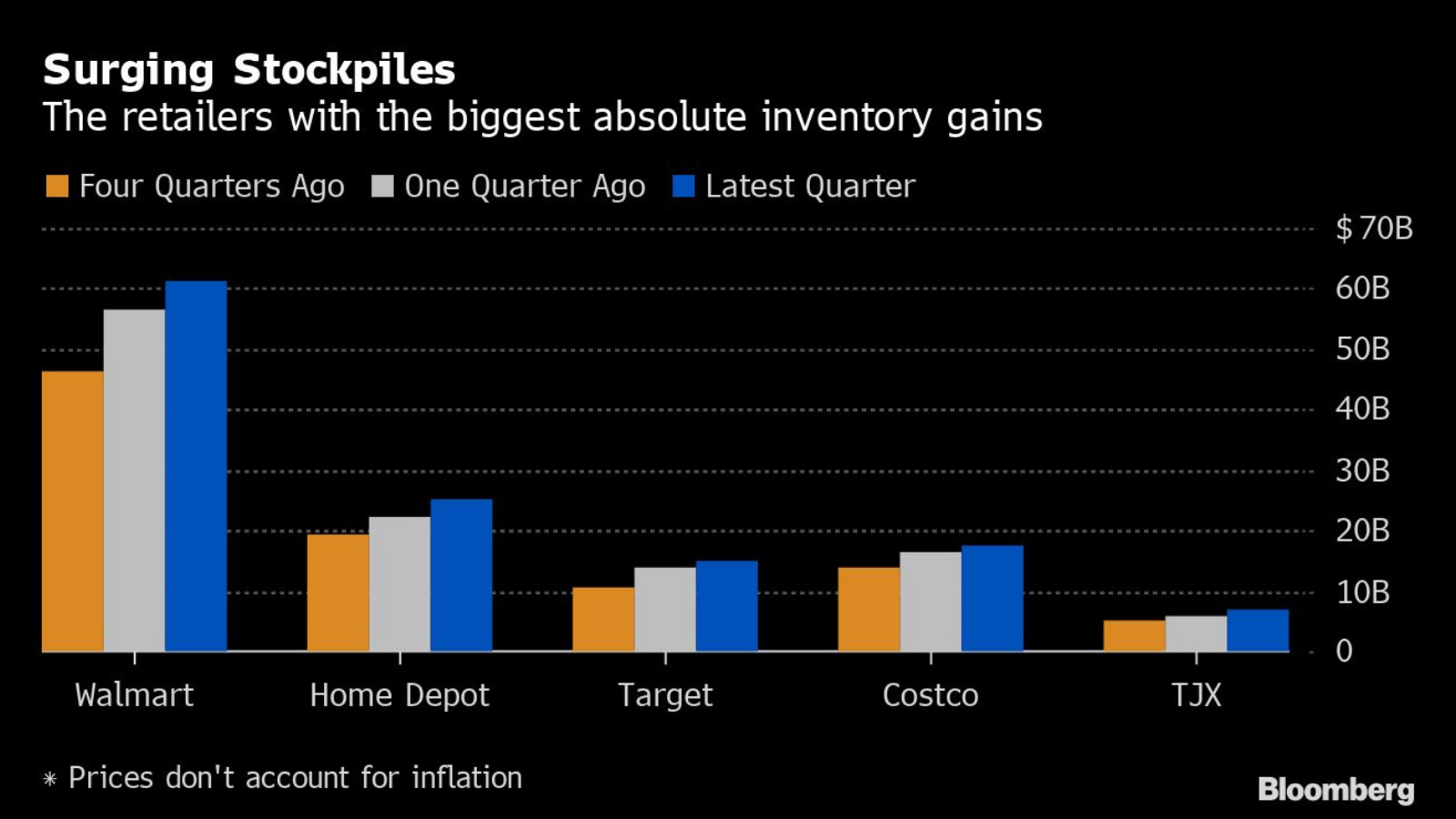 Economists expected money allocated toward services would outpace merchandise as pandemic concerns subsided, but both categories have continued to move upward. Inflation-adjusted spending on services increased 0.5% in April from the prior month while goods rose 1%.

While that leaves plenty of demand for retailers, consumer tastes are changing. At Macy’s Inc., shoppers spent more on back-to-work apparel and clothing for special occasions, instead of on the leisurewear and home goods that were popular earlier in the pandemic. The sharper-than-expected shift left the company with a glut of merchandise that consumers didn’t want.

That means Macy’s will have to cut prices in slower categories to make room for in-demand items. Target, which recorded a 43% jump in inventory, is in the same boat, as are Gap Inc. and Abercrombie & Fitch Co. Walmart Chief Executive Officer Doug McMillon told analysts he was glad inventory was higher, while acknowledging that the 32% increase in the first quarter “is higher than we want.”

Macy’s, which saw a 17% jump in inventories, said having merchandise on hand early will ensure key shopping seasons go smoothly. CEO Jeffrey Gennette sees “storm clouds looming in the supply chain” once delayed cargoes leave China and make their way to busy ports on the U.S. West Coast. As a result, the department-store operator is pushing up some of its ship dates on important goods ahead of back-to-school and the holidays.

Similarly, Costco Wholesale Corp. said its 26% jump in inventory was fueled in part by a decision to replenish its stockpile after high demand last year, and as insurance in case supply chain disruptions get worse. The company expects to sell through it “without really a lot of heartburn,” said Bob Nelson, senior vice president of finance. Some of the extra inventory consists of holiday goods that will still be good this year.

A lot of seasonal goods are “just Christmas stuff that came in late,” Nelson said May 26 on a conference call with analysts. “We’ve got it in deep freeze and we’re going to put it out this fall.”